There was a time when insulating an historic property meant treading lightly on its building fabric. But today, guided by building physics, passive house designers continue to push the boundaries of retrofit by bringing old homes up to modern standards of super-insulation. This project is the third such deep retrofit to an historic London property by Green Tomato Energy.

Plenty of people look to build a new house or upgrade their existing home, but few actively go looking for a run down shell to fix-up. But building a new house in London isn’t easy or cheap, and Luigi Caccavale says he and his wife Jane were “looking for something that we could put our mark on”.

The couple came across a run-down Victorian house in London SW18, and bought the property with the intention of radically overhauling it. Energy efficiency was a priority, and while Luigi had heard of passive house, he wasn’t planning to aim for the standard.

He appointed a contractor (Reality HG) and an architectural design consultant (Richard Bridges), but later decided to bring in Green Tomato Energy as dedicated energy consultants. The company was behind the pioneering renovation of two historic properties at Lena Garden and Princedale Road in London to the passive house standard. 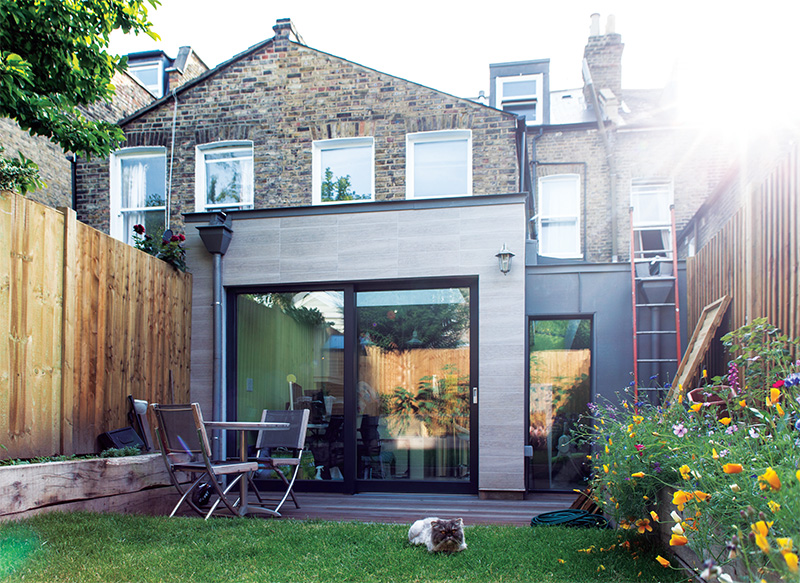 But Luigi still wasn’t thinking about passive house. The contractor (who subcontracted out the on-site labour) was keen to get started, but Green Tomato Energy wanted to go back to the drawing board and refine the energy design details.

The company told Luigi about Enerphit, the Passive House Institute’s retrofit standard, which was quite new at the time. Luigi decided to halt plans to start work and to begin working through the details again, with the aim of reaching Enerphit.

This would mean heavily insulating the house on the inside of the existing walls. Even though the property isn’t in a conservation area, external insulation was a non-runner with the planners. And of course, insulating inside to onerous Uvalues carries the risk of interstitial condensation (and subsequently mould or structural defects) if the dew point is reached within the wall build-up. Dealing with this challenge required a lot of careful modelling. 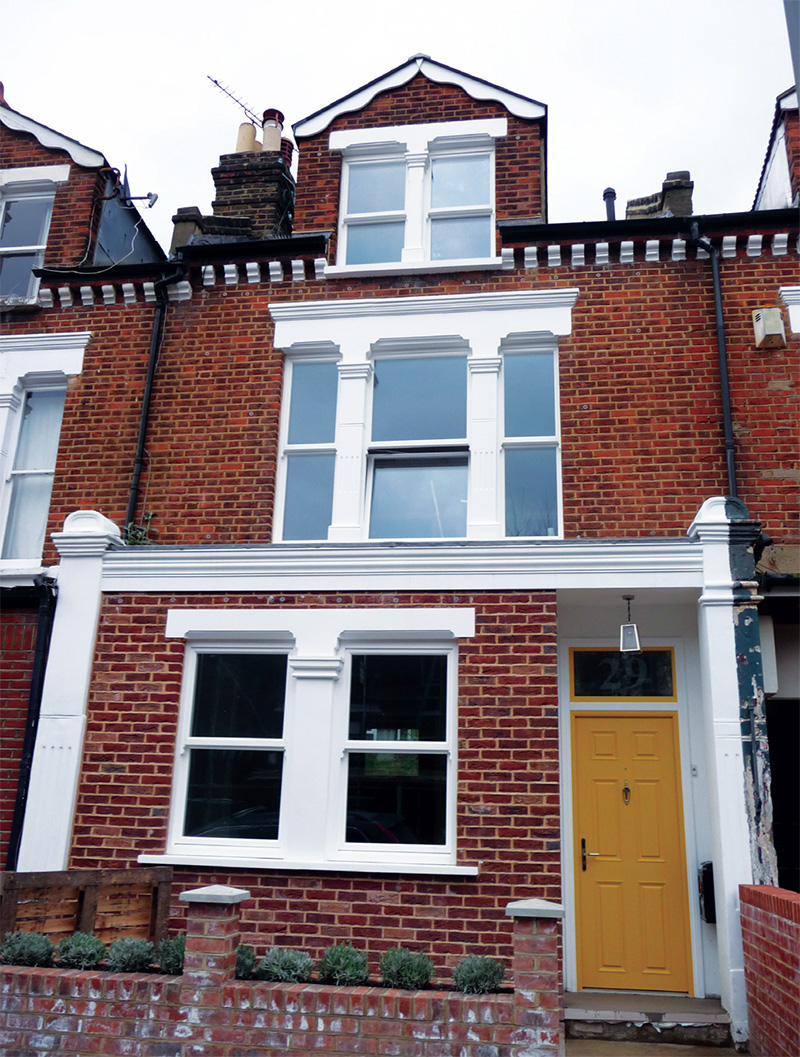 “That’s where we lost most of the time. And that’s where I realised the level of detail that is required,” Luigi says. “We haven’t gone through winter yet, but I think we got it right.”

The property is only 5.5m wide, so the team opted to use 100mm Xtratherm Safe R phenolic board to insulate inside the walls. Phenolic provides a high level of insulating performance for less thickness than polystyrene or mineral wool.

The joists of the second floor, however, run from the front to the back of the house rather than between party walls — meaning they penetrate the thermal envelope and leave timber exposed between the insulation and the wall, an area that could be prone to condensation. 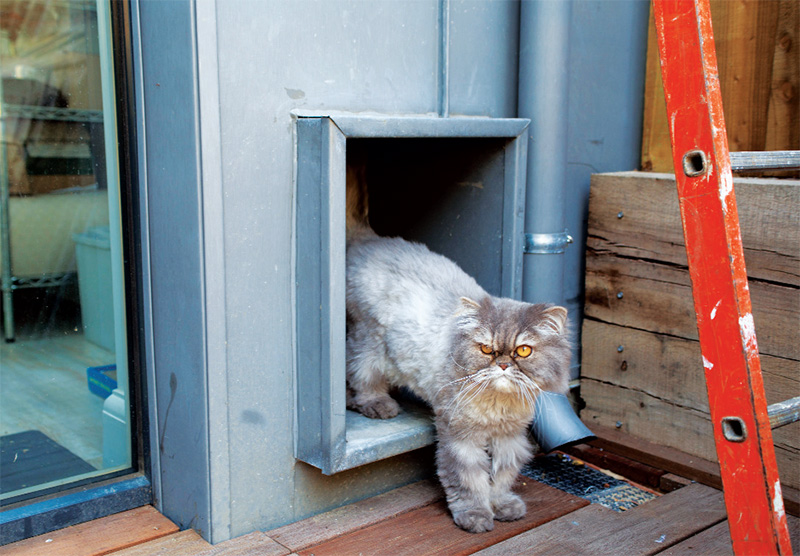 The certifier, Peter Warm advised that dynamic hygrothermal simulation - using the Fraunhofer Institute's Wufi 1D and 2D software - should be carried out on this junction. Marine Sanchez, building physics engineer and passive house designer at Green Tomato Energy, explained that the most robust solution would have been to rehang the joists inside the thermal envelope. But this would have involved major structural work, and the budget simply wasn’t available.

The second best solution was to ventilate the cavity between the insulation and the old wall, to protect the joists from rotting. 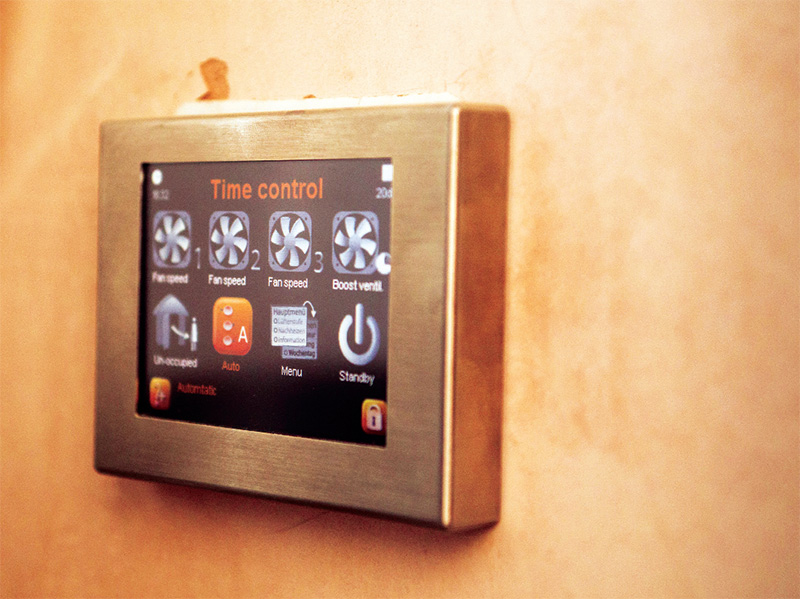 Joseph Little of the Building Life Consultancy analysed this junction using Wufi 1D and 2D, and advised that while this wasn’t quite as robust as rehanging the joists, it should keep conditions within the timber joist ends at just under acceptable moisture limits.

Green Tomato Energy also installed eight moisture monitors in the joists ends (four on each façade). If monitoring indicates they are at risk, the plan is to impregnate the bricks of the external facade to reduce the water content in the bricks and protect the joists. In such instance it would be essential to use a breathable water-repellent product — so that liquid water can’t get in, but water vapour from inside can still escape. 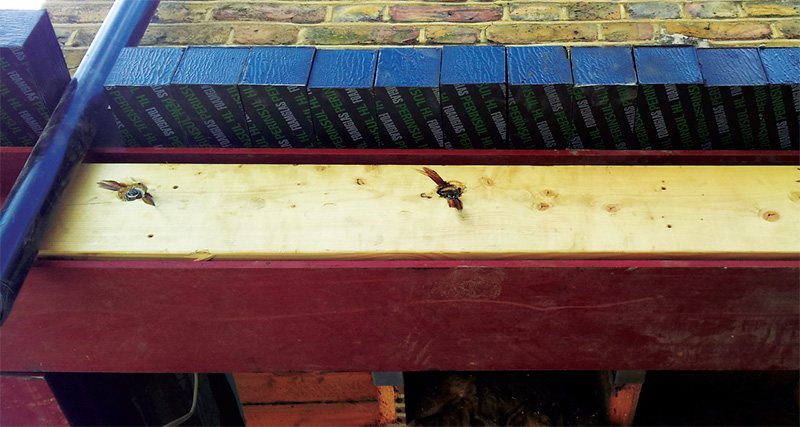 The use of Xtratherm Safe-R phenolic insulation was continued through the rest of the building envelope. It was used to insulate the pitched roof of the original house, the flat roofed extension, and the ground floor of both the new and old structures. The team also used Foamglas Perinsul low thermal conductivity blocks around the perimeter of the floor and above the new steel beams now supporting the first floor walls, to cut out thermal bridging.

Xtratherm Safe-R was also used to full-fill the cavity walls of the extension, which are constructed with Thermalite Hi-Strength concrete blocks. Marine says the design of the extension required a lot of modelling to assess and eliminate thermal bridges — or to make sure any that couldn’t be eliminated were reduced to a minimum. The complete airtight layer — for both the original house and the extension — is provided by the Pro Clima suite of tapes and membranes. 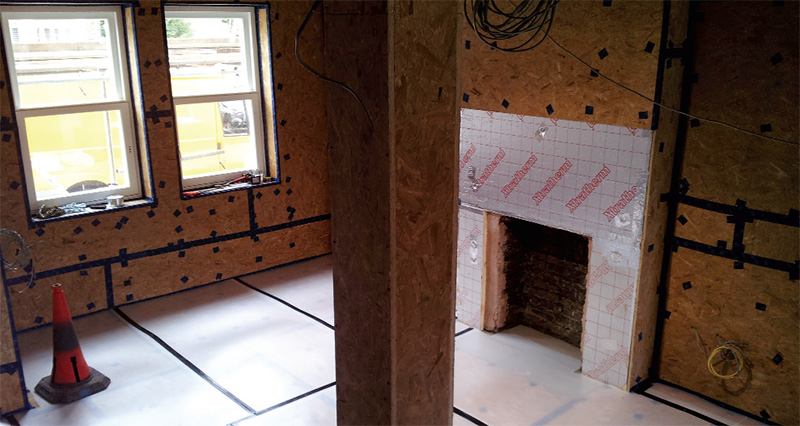 Keen to maintain the historic facade, Luigi chose to install Green Tomato Energy’s own triple-glazed sash-lookalike casement windows, which the company first developed for their passive house retrofits at Lena Gardens and Princedale Road. These feature standard argon-fill and a low-e coating, and deliver an overall U-value of 1.06. For the extension, the windows are tripleglazed Optiwin Alu2Wood units, sourced from the Green Building Store.

Luigi and Jane were also keen to let more natural light into the dark Victorian interior, and chose to install Glazing Vision triple-glazed roof-windows to the extension, which houses the kitchen and dining area.

“One of the issues was poor natural light so we positioned two roof lights, fixed vertical glazing and sliding doors on the side and rear [of the] extension to gain as much natural light as possible as the sun moved around the property throughout the day,” says architectural design consultant Richard Bridges. Meanwhile the house’s heating system is about as simple as it comes — a Vaillant condensing gas boiler supplying standard radiators on the first and second floor, and underfloor heating on the ground floor. There’s also a small woodburning stove, and a Paul Focus 200 heat recovery ventilation system.

The final blower door test produced a result of 0.87 air changes per hour, and the house received Enerphit certification in May. But besides energy efficiency, what kind of place to live did Luigi and Jane want to create? 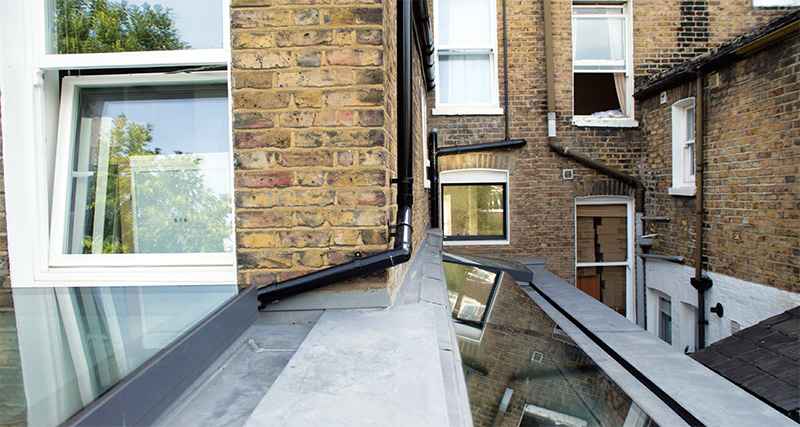 The triple-glazed rooflights from Glazing Vision allow plenty of natural light into the new extension, which houses the kitchen and dining area

Richard Bridges says: “The first goal was to extend the property on the ground floor to create a more open-plan, free-flowing, light-filled family kitchen, dining and living area more suitable for a modern day growing family.”

“We also had to squeeze in a ground floor utility and WC which wasn’t present in the original layout. The cats also featured on the main design brief. We needed to find a way to get the cats in and out of the property in an airtight and thermally efficient way!” (The team ended up choosing an airtight cat flap from Freedom Pet Pass).

While Luigi and Jane only moved into the house in April, most of the building work was completed by December, and anecdotally Luigi says that even before the heating system was commissioned it was quite warm inside, with painters wearing just t-shirts while working in the dead of winter. The house has also had to deal with recent heat waves, and Luigi says that as long as he opens windows at night, there is no overheating.

So what lessons have been learned from such an ambitious retrofit? Naturally enough considering how the project started out, client, architectural designer and energy consultant all agree that it would have been best to plan the retrofit in detail from an earlier stage. Luigi says this would have saved him money too, particularly on labour costs. 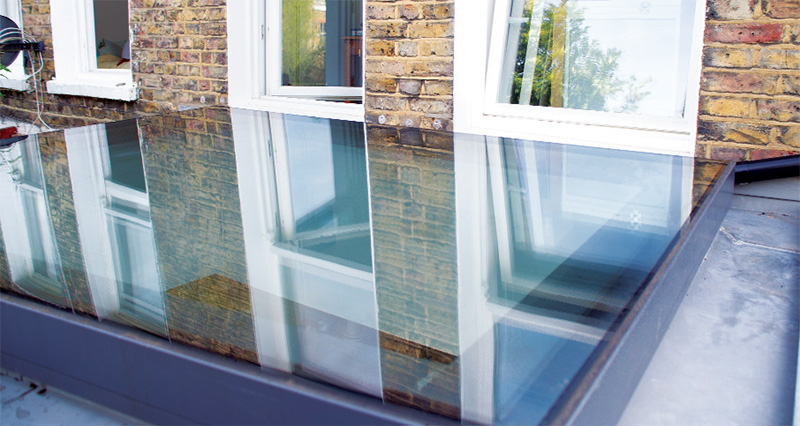 “It was a very good learning curve for everybody, especially as the rest of the team had never been introduced to Enerphit [before] or anything like that,” says Marine. She credits Luigi’s commitment to reaching the Enerphit standard for driving the project through. “Without his determination we might not have ended up in the same place.”

Richard Bridges adds: “The whole design team, builder and client had to be in the same mind set and completely committed to achieving the end goal from the outset, as all typical construction details for a domestic project of this type had to be modified and thought about in a new way that most people in the team were not used to dealing with.”

Putting an ultra-detailed project like this to tender and just picking the cheapest offer will not work, Luigi says. He offers his advice on picking a design and building team for a project like this: “Get people that are buying into the objective you want to achieve,” he says. “You’ve got to have a bit of passion, and you’ve got to have someone who wants to achieve that as well.” 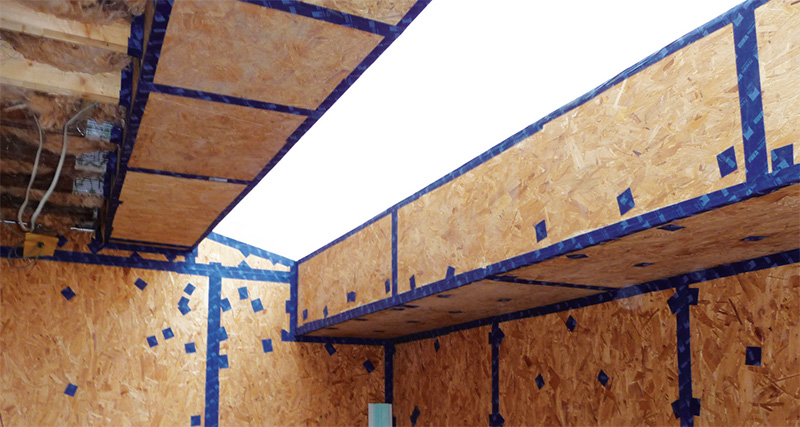