The integration of buildings with the material cycles and energy flows of the natural environment is the priority in ecological architectural design. The visitor centre and the associated buildings at Castle Espie have this integration as a cornerstone of the architecture – defining its form, its energy strategies and its material choice.

The building proposals – largely finished in June 2009 – consist of five elements: the visitor centre itself, the limekiln observatory, the crannog, the limestone pavilion and refurbishment of existing buildings, a total floor area of some 850sqm.

The visitor centre
The challenge for the design team was to marry the domestic scale and intimacy of the three retained buildings with a new form that gave a stronger architectural identity, to improve the facilities and provide for greater entrance visibility to the centre.

A new east-west linear building in the form of a long great hall replaces an awkwardly positioned shed and connects each of the retained buildings. This hall provides the new entrance facilities, shop, event space and café. Its cranked roof form is both functional in assisting the natural ventilation and day-lighting of the space and also architectonic; it responds to the domestic scale of the south facing courtyards and existing buildings whilst rising to give a strong presence to the north and the view across the ponds to Strangford Lough. The lower sedum covered roof section on the north side shelters more intimate spaces within the café and service spaces adjacent to the shop and entrance. Three external spaces are defined by the combination of new and retained buildings: the arrivals courtyard with threshold pool, the paved courtyard for the café and, to the west, the lawn of the event space. 
The limekiln observatory
The existing derelict limekiln – partially destroyed by American naval bombing practice in the 1940s – was renovated with limited works to clear the pots, and the stonework was repaired with the surrounding fallen stones. In order to retain the integrity of the existing structure and at the same time to provide facilities for the observatory, a largely glazed pavilion is positioned adjacent to the top of the kiln, providing a sense of arrival at the top of the existing earth ramp. The observatory is a light steel structure with glazed envelope and timber-clad service pod in contrast to the existing masonry structure, but it is sympathetic in form and proportion – positioned to the rear of the kiln itself but engaging with it. Timber decks are cantilevered out towards the pots for viewing of both the lake below and the wider horizon of Strangford Lough.

The crannog
This new structure is to be used as a sheltered viewing area of the surrounding wetlands and informal teaching space – constructed to the architect’s design in a traditional manner by Joe Gowran and his team, a dry stone wall base supports vertical oak posts carrying the exposed Scots pine roof structure. The walls are constructed of a double skin of wattle and daub with internal hemp insulation; the roof is beautifully thatched; the external finish of the walls in lime wash, the floor of rammed earth. The crannog is an example of traditional craft skills using local materials – all materials are sourced locally, from the hazel to the reed thatch, and furthermore all materials are capable of harmlessly degrading into the soil at the end of the building’s lifespan.

The limestone pavilion
Positioned adjacent to the now water-filled limestone quarry and en route to the old limekiln, this small building is an educational facility on the story of lime – both its construction and its content tells the tale of lime use. It is a timber frame building with hemp lime infill – supplied and installed by Clones-based Hempire – resting on a Castle Espie limestone base with limecrete floor and hemp insulation in the roof. The intensive green roof is covered in limestone grassland from the soil of the cleared site. On the rear of the building is a climbing wall with fossil foot and hand holds. The interior exhibit tells the story of limestone and its uses and includes half buried fossils in the hemp lime walls.


Refurbishment and landscape
In addition to the retained buildings at the visitor centre itself, there were lower key works to the existing hides and ground staff facilities on site. The landscape redesign was a crucial part of the works programme involving remodelling of much of the wetlands – controversially removing many softwood trees that had been planted along the foreshore. The remodelling improved the variety and accessibility of the wetland habitats for the birds and thus enriched the ecology of the site, and provided better visual access for the visitor to both the birds and the remains of the site’s very rich industrial archaeology.

Energy
The first move was to reduce building energy demand and this has taken the form of designing for natural ventilation, maximum day-lighting, low energy electrical fittings and high levels of thermal insulation to give a designed energy rating of 125kWh/m2/yr. The heating  u system is controlled by a building energy management system (BMS) while digital signals from electrical, solar water, and mains water are connected to the BMS to monitor energy usage. 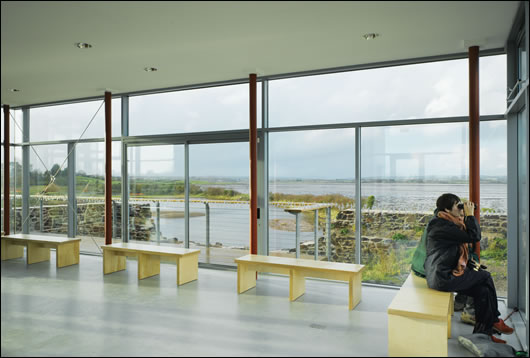 
Six square meters of evacuated tube solar panels are situated above the plant room and provide up to 50% of the building’s hot water needs over the year.

A 5.5kW Askra wind turbine was selected and produces about 10,000 kWh per year. The electricity is fully utilised in the building, but if it should produce more than required then the surplus is fed back into the electricity grid.

The space heating for the visitor centre is provided by an 180kW wood–pellet boiler, with heat distributed through a piped circuit in the floor. The pellets are manufactured in Fermanagh but the boiler has the facility to be changed over to take woodchip, and so in the future can use local woodland thinnings, including from the woodland at Castle Espie itself. This would allow the centre to become totally carbon neutral for space heating requirements.

Ventilation
Natural ventilation strategies are used throughout the main spaces of the centre and the form of the roof in the long hall facilitates this. The lower windows on both north and south elevations are manually operated to allow wind driven ventilation, while actuator-driven clerestory windows above allow buoyant warmed air out.

Roof and structure
The roof shape enhances the flow of air through the building from the predominant wind direction of southwest, and prevents too much sun from entering the building to the south and hence overheating in summer. The roof structure is glue-laminated timber both for the columns and cranked roof beams, and the ceiling material is tongue-and-grooved solid timber decking, which provides stability for the timber frame. The clarity of the structure both defines the rhythm of the building but also gives legibility to the interior.

Materials
A palette of low embodied energy materials was generally sourced for the project with high-embodied components such as the high spec double-glazing chosen where high levels of performance were required. Thus the principle structure and decking is of timber, chosen too for its visual warmth and for its potential as a carbon neutral building material. Recycled slates are used on the roof, lime renders on the masonry elements of the building, marmoleum on floors. The principle of monomeric construction has been utilised, most notably in the timber frame and envelope, whereby elements are layered on one another and methods of fixing facilitate deconstruction at the end of the building’s life. 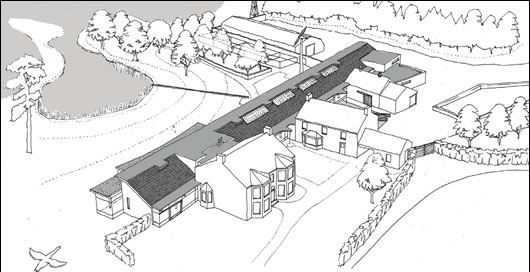 a bird's eye perspective of the visitor centre


Health
Health impacts in the choice and method of fixings of materials were considered over the full life cycle – certain materials such as PVC were specifically avoided in the choice of membranes and finishes. Low VOC glues were used for marmoleum floor finishes, and paints – both fire retardants and wall finishes - are either low VOC or of natural ingredients.

Existing buildings
Three of the older buildings that formed the visitor centre were retained in the new design. These buildings contained useful cellular spaces and defined external courtyards and gardens. Keeping them retained some of the previous character of the centre and – through re-use – saved embodied energy otherwise required in new building materials. The existing buildings were upgraded with insulation to improve their thermal performance.

Water
Rainwater collected from the south facing roof is re-used in the building to flush toilets. This combined with the dual flush mechanism on the toilets makes a considerable contribution to water saving in the building. Rainwater is also collected in the pool at the entrance where it provides a freshwater habitat for pond dipping before draining out to the wetlands in the  u reserve, thus connecting the building visually into the water cycle of the site. 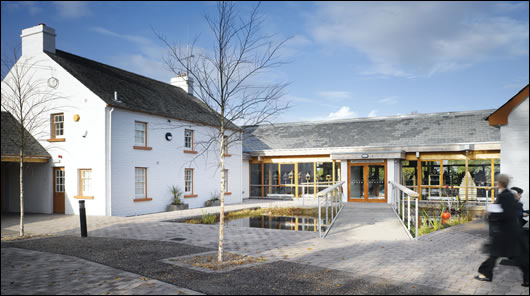 The visitor centre entrance across the threshold pond, flanked by the renovated existing buildings


Wastewater
The existing reed bed and settlement tank for wastewater treatment is used in combination with a new vertical flow reed bed and horizontal flow polishing reed bed in the woodlands. The purified water is then returned into the ground via a willow bunded percolation area.

Transport
All school groups arrive at the centre by coach and entrance fee incentives are provided for those who arrive on bicycle, which is encouraged by the centre’s position on a national bike route. Car parking areas are drained via permeable surface finish allowing rainwater to percolate to the ground.

Service pod
The services for the building are placed in a timber-clad pod, which contains the WC and collects rainwater from the roof for WC flushing. Space heating and hot water is provided by a wood pellet boiler connected to a hot water cylinder which feeds the underfloor heating in an insulated screed. 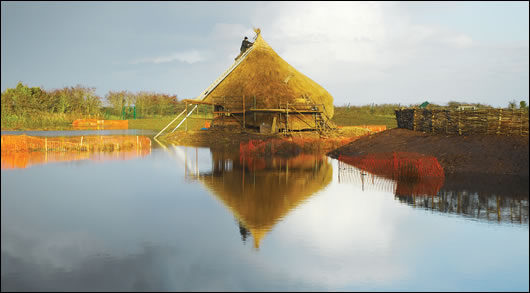 The crannog - showing its waterside position and dominant thatch roof


Wastewater treatment
Ollan Herr of Reedbeds Ireland designed and installed the wastewater system. A source separation Roediger WC directs faecal matter to a composting unit and directs urine to storage tanks. In this way the urine is kept uncontaminated and can be reused as an agricultural fertiliser, while the two-chamber composter means that all pathogens in the faecal matter are killed in the yearly cycle of decomposition. An Aquatron in the compost chamber directs any residual brown-water to the reed beds. This system reduces the load on the reed beds in an ecologically sensitive area and at the same time turns human waste into a usable commodity – a closed loop strategy.