This issue features a certified passive house in South Island, New Zealand, and the Bagley Outdoor Classroom at the University of Minnesota, Duluth. 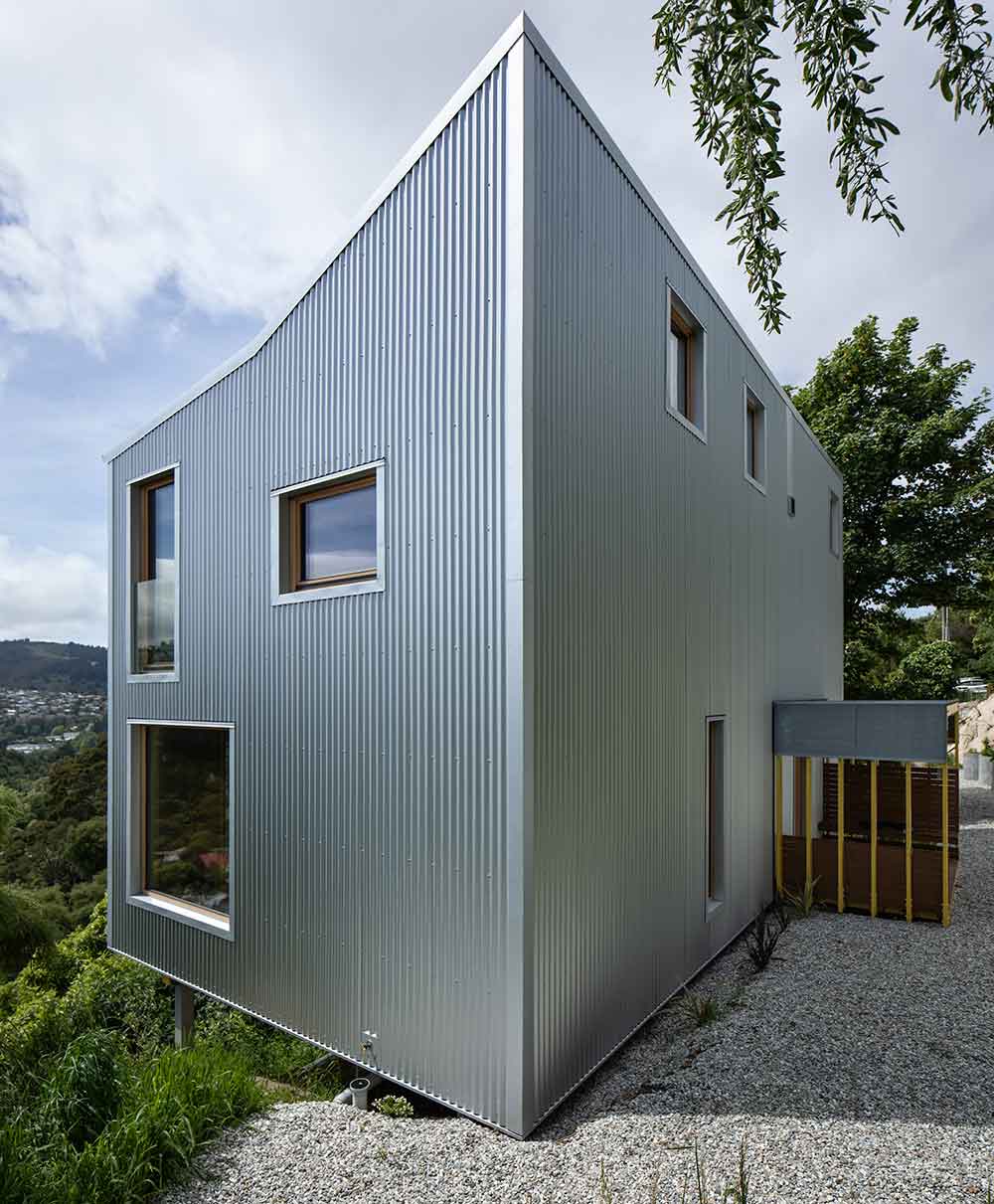 Designed by architect Rafe Maclean for his own family, the Kowhai House — named after an existing native kowhai tree which now forms a central view from the living room — is perched high on a hillside clad with native trees overlooking the Leith Stream in Dunedin.

With the site’s marginal soil conditions and difficult access, the building was designed to be simple in both form and buildability. The house is a gabled rectangle, but with one roof face of the gable roof sloped up from the ridgeline, not down, providing internal space for mezzanine beds. 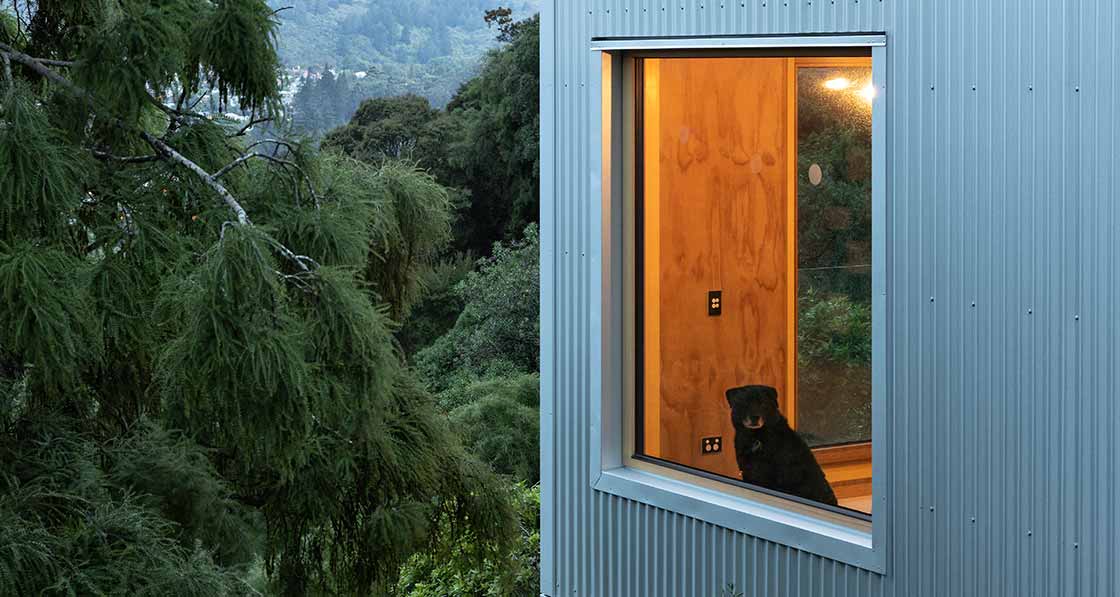 Because two members of the family are asthmatics, building a certified passive house — with the standard’s focus on indoor air quality — made obvious sense. It also helped that Maclean is one of NZ’s leading passive house designers.

The house’s arrangement had to be efficient but comfortable enough for four people to live together, with each person having their own space. At 116 square metres the house is not expansive, Maclean says, more a comfortable retreat from the city and its challenging climate (Dunedin being often labelled the ‘Edinburgh of the south’).

With such an airtight structure (0.1 air changes per hour), and low air volume inside the house, the interior is apparently quite sensitive to overheating. However Maclean says this has been successfully mitigated by adjusting ventilation rates when needed, and by night time flushing through windows for short periods when required.

Maclean says the family has taken a while to adjust to the interior temperatures coming from living in a typical NZ house, discarding woollen jerseys for t-shirts and shorts even through the winter months, and swapping blankets for sheets on beds.

Inside, the structure of the intermediate floor is exposed to give more height to the space under it, with service lines (waste water/ventilation ducting) carefully concealed behind a partial floating ceiling aligned with interior cabinetry. Interior finishes are warm and welcoming, with prominent use of NZ pine plywood. 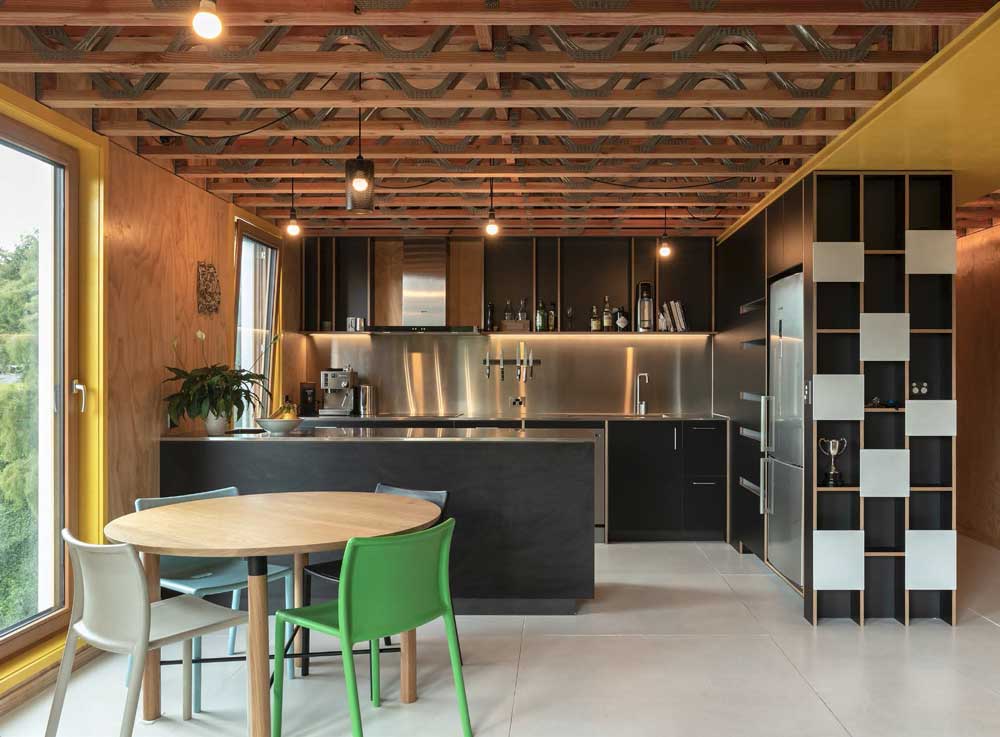 Outside, the house’s striking exterior cladding is Zincalume corrugate, which gives a crisp juxtaposition amongst the green surroundings, while the yellow highlights on the exterior and interior are a visual salute to the Kowhai tree flower.

The Macleans have lived in the house for a year now, and thoroughly enjoy its various spaces, compactness, connection to the exterior, quietness, thermal comfort, and of course the tailored view from the main room to the kowhai tree.

Designed by Maclean and built by Stevenson & Williams, the house was certified by passive house certifier Jason Quinn as a ‘passive house classic’ in June 2018. 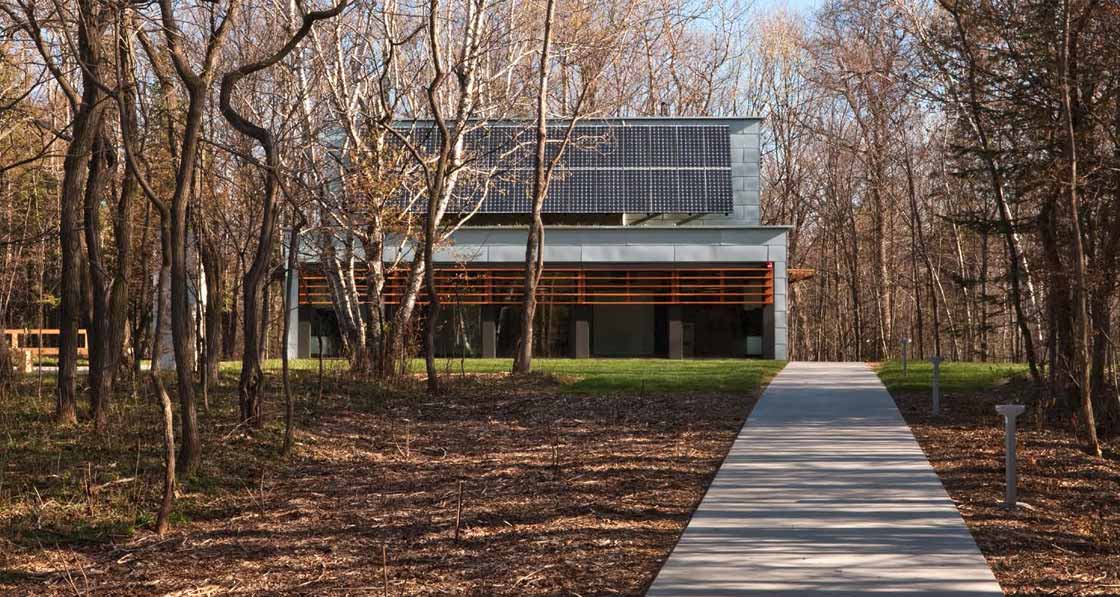 Situated between the shores of Lake Superior, the city of Duluth and the great forests of northern Minnesota, Bagley Outdoor Classroom is uniquely positioned for ecological field research into this region’s unique habitats.

Bagley is a 50-acre nature preserve located on the UM campus. It contains rich boreal forest, trout streams and abundant wildlife, making it a perfect ecological microcosm for field study. For years, however, students studying or conducting research here had no permanent facilities to accommodate their needs.

But when an old volleyball court on the edge of the reserve fell into disuse, it presented an opportunity to provide students with a permanent base for their fieldwork. Situated in such a special place, the building was always going to need to be quite special, too. 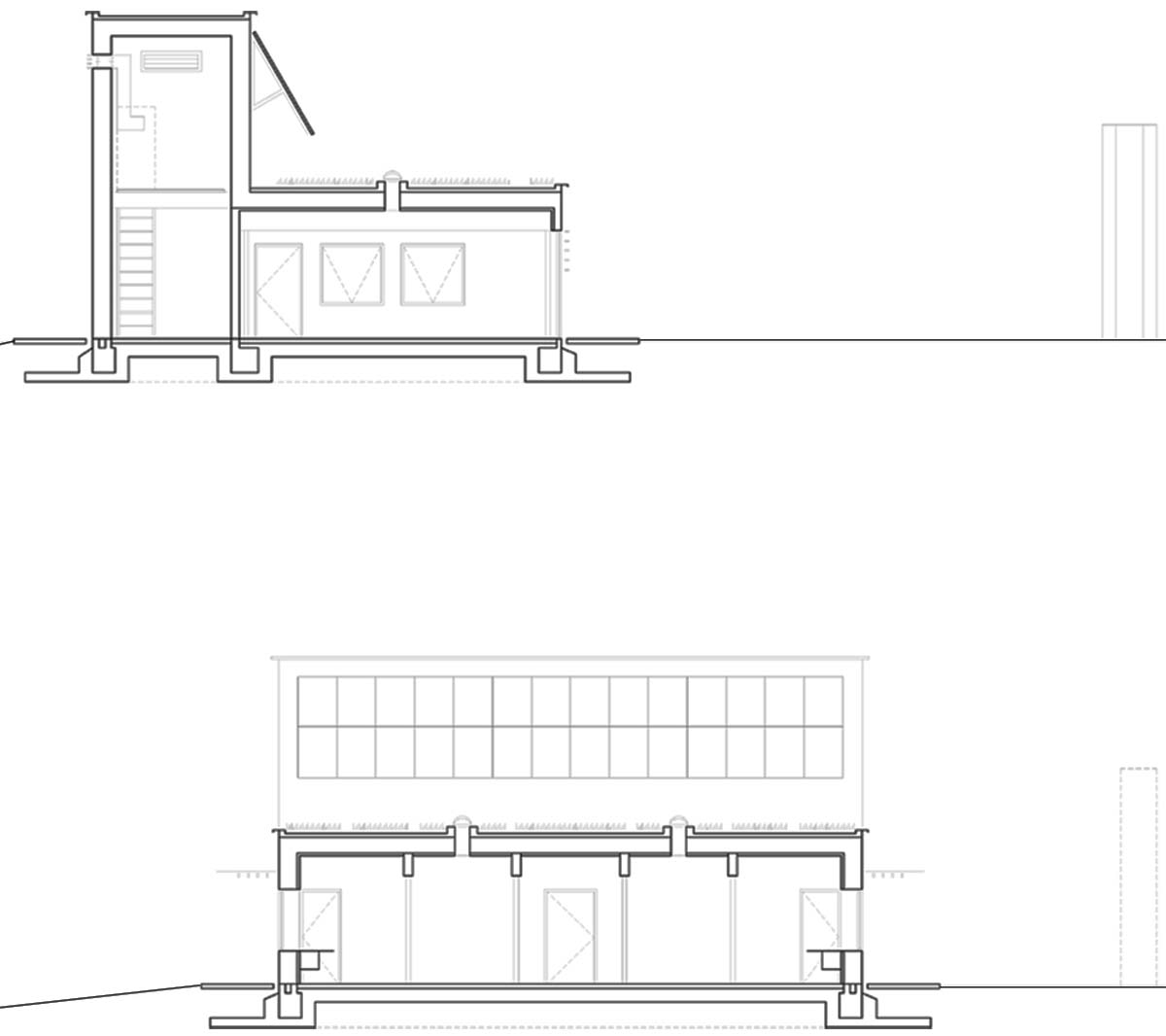 Designed jointly by architects Carly Coulson and David Salmela, the finished building — completed in 2010 — provides a unique space from which students can observe the passage of time, of seasons, of weather and of wildlife. The finished Bagley Outdoor Classroom functions as exactly that — a classroom — but also as a shelter, laboratory, chapel, gathering hall and observation facility.

“It is transformed hourly for different functions but maintains an order and serenity, even when overflowing with activity,” says Coulson. There is a flexible assembly room facing south, while toilets, storage and a wet lab face north.

“Sustainability is invisible, integrated, elemental,” she adds. Indeed, the building is both LEED platinum certified and built to the passive house standard (though not certified to that benchmark). It is built from locally-made structural insulated panels that are packed with recycled foam insulation, and also features a 6kW rooftop solar photovoltaic array.

But sustainability on the site went much further than just energy. First, there was deep attention to cutting construction waste (it was reduced by 89%, the designers say). All scrap EPS from the site was returned to the manufacturer to be recycled again, for example. Meanwhile, a maintenance-free exterior zinc cladding was salvaged from a project in Minneapolis and reused for the building. 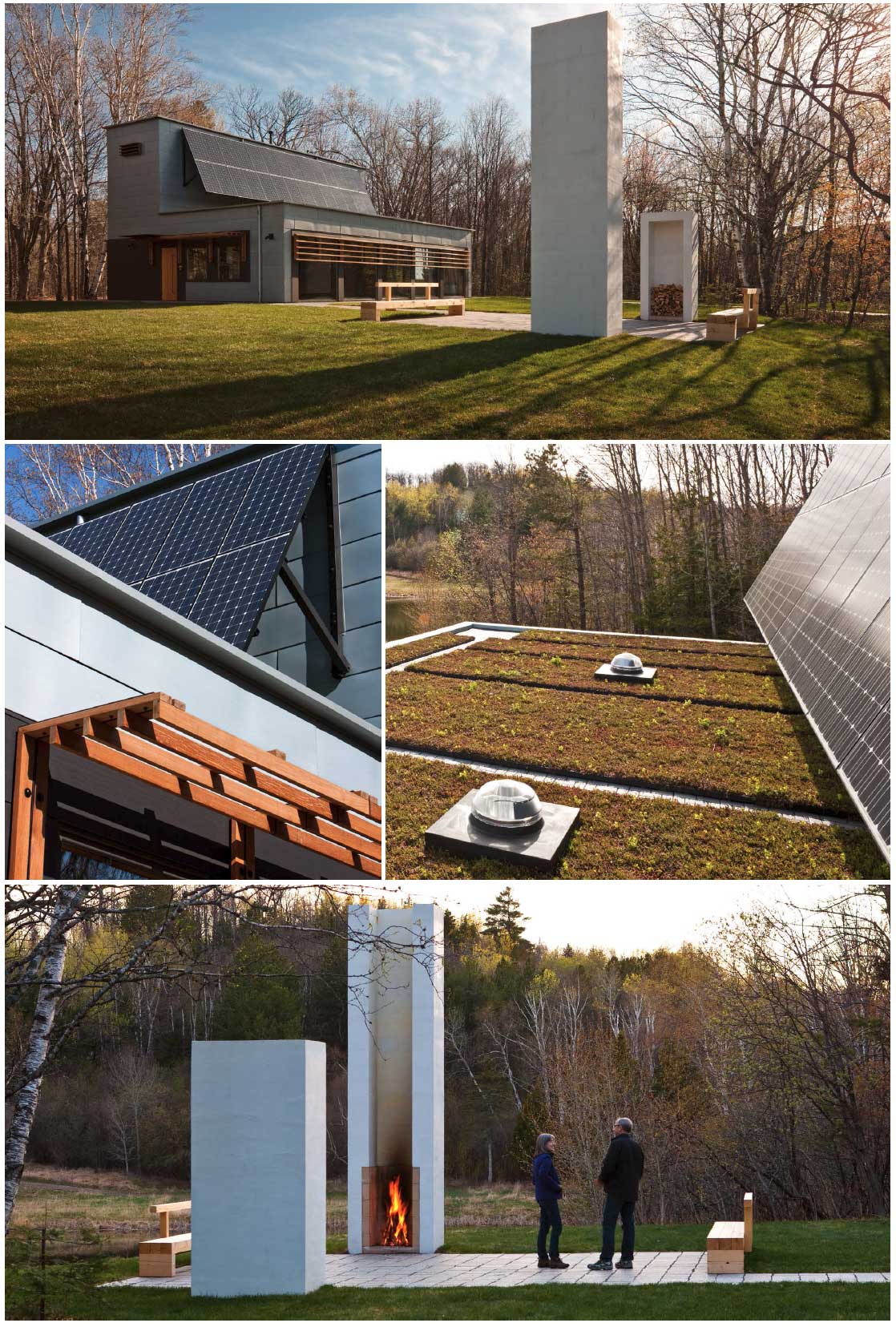 There was also special attention paid to conserving water: toilets boast a vacuumflush and composting system that uses tiny quantities of water, while the compost is then used for campus landscaping. There’s also a drought-tolerant green roof planted in sedums and chives that changes colour with the seasons — and which absorbs stormwater, provides extra insulation, and increases habitat.

All of which put Bagley, completed almost ten years ago now, way out the front of the sustainable building curve.