Homeowners Michael and Paula Sheridan say that, living in their farmhouse-inspired Mayo passive house — which includes a highly unorthodox heating system — it’s easy to completely forget how cold it is outside.

Even after three years living in a passive house, Michael and Paula Sheridan still get a little confused.

“We could be in the house and we could be walking around in just a T-shirt or what have you, and then you gather the dogs and you open the door to go out for a walk and then you suddenly realise just how cold it is outside,” says Michael Sheridan.

“And it’s a strange sensation. You are looking out on the environment. It might even look like a nice day. You open the door and then all of a sudden you feel the chill wind and you are thinking, oh, I’ll have to go back in and get a jumper or something because I ain’t going to go far with just a T-shirt in this.”

The enveloping sense of warmth extends from the built-in garage through to the utility room. “The heating is just completely unobtrusive,” he says. “And it’s only around the winter-time that we actually need any heating at all, because the solar gain alone does everything else.” 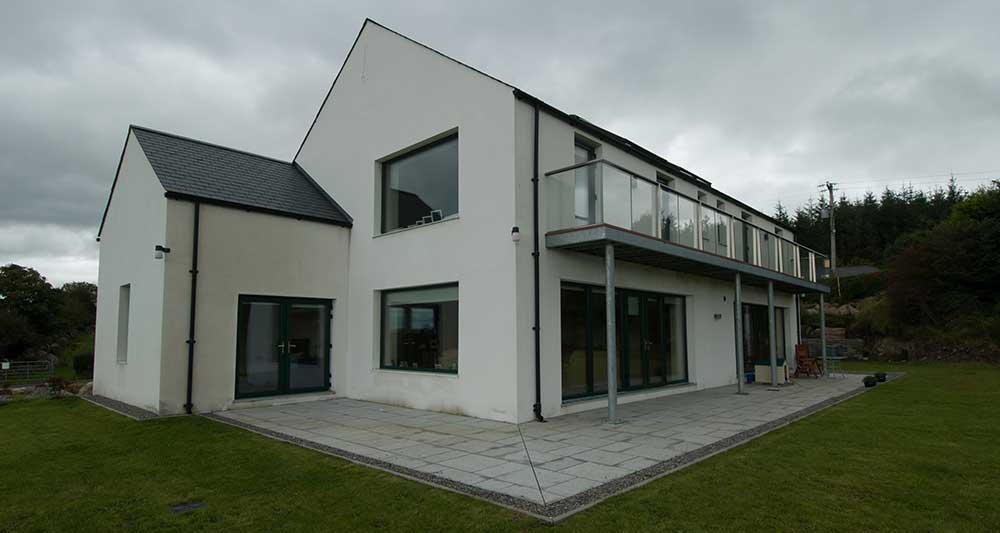 Michael says visitors to the house — outside Foxford in County Mayo — comment on how lovely and warm it is, and say the house is noticeably free of stuffiness, and has very little dust. “Paula was saying…she could nearly dust the house once a year now. And it’s just there’s nothing coming in.”

It might have taken nine years for Michael and Paula to move in from the time they decided to build, but it was clearly a journey worth taking. Although construction didn’t commence until May 2013, the couple had met up with Jay Stuart in Dublin some seven or eight years previously. He was one of very few architects in Ireland at the time with passive house know-how.

He suggested that the cost of travelling up and down to Mayo would weigh too heavily on the couple’s limited budget, and suggested they find a local practice. So they approached the local council and it suggested Westport based architect Cuala McGann (now of McGann-Bauduin Architects). 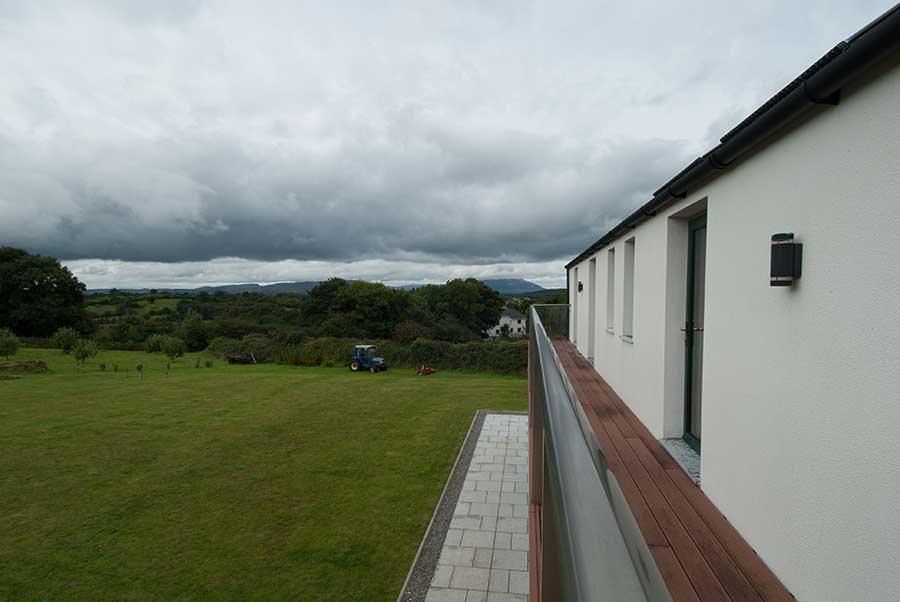 “So we went to Cuala and we seemed to hit it off straight away, because as soon as we mentioned ‘passive’ her eyes lit up, because she was thinking of building a passive house [for herself] at the same time,” says Michael. The couple had long fancied a passive house. Michael had heard of the standard while living in Germany, and later learned more as part of a project on construction costs for an engineering diploma course he studied in Scotland.

The project was somewhat bedevilled with the considerable intricacies and timeframes involved with gaining planning permission for a one-off build on a greenfield site in rural Ireland, but in a way the timing worked out well. McGann trained up on the passive house standard and PHPP in the meantime through her own home-building project — skills she later augmented by signing up to one of the first training courses delivered in Ireland by the Passive House Academy in 2010. 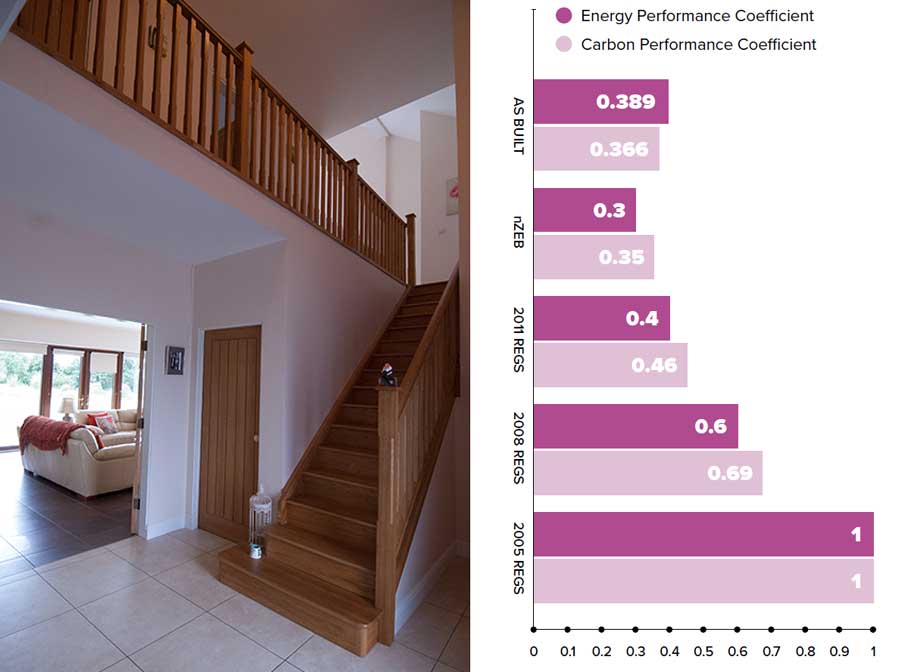 The next challenge for the designers came at the detailed planning stage. The original design intended to sink the bottom half of the house into the ground, with some excavation required. But the local council objected, leading to a major revamp into a two-storey shape, built with the garage tucked into the east side of the house so as not to obstruct views or light. But the simple and compact design did enable the finished dwelling to achieve the passive house standard with an economical budget, according to McGann.

“The orientation of the site was also a very important factor in that the private amenity areas are south-facing with very little shading. We found that we didn’t need to increase the levels of insulation enormously to achieve the required maximum heat load levels,” she says. The balcony helps to prevent overheating by shading the living room and back room on the south façade.

Working with Galway-based contractor James Kearney of K & K Passive Homes, the team opted for details that he had experience with, including a passive slab foundation system and wide masonry cavity walls with full-fill bead insulation. Wide cavity walls are still somewhat rare in passive new builds compared to single leaf with external insulation, or timber frame, but Kearney was keen to work with this system, and McGann says that it proved straightforward to build and was somewhat cheaper in this case than an external insulated render. 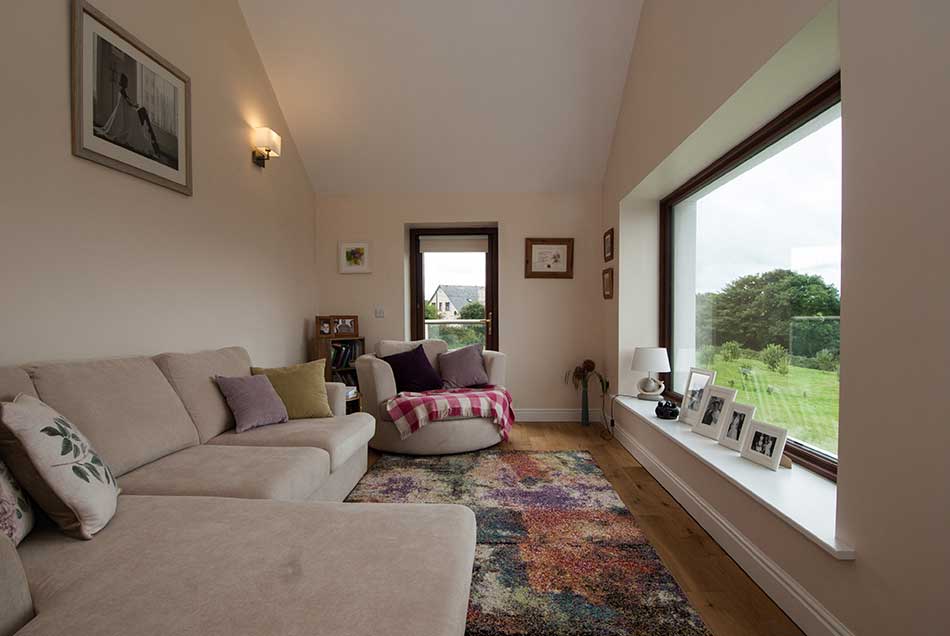 The heating strategy is certainly unorthodox. A 60 tube solar thermal array feeds a 500 litre cylinder, aided by an immersion timed to avail of night rate electricity. This supplies underfloor heating downstairs in two zones – thermostatically controlled – on timers for the front and back of the house. “They kick in a fair bit in winter,” says Michael Sheridan. Added to that is a form of direct electrical heating more commonly used to prevent pipes freezing in cold climates – a trace wire, in this case contained within the slab towards the perimeters.

This is set at 25.5C for the six month long heating season and runs from 11pm to 7am – triggered by a temperature sensor in a walk-in wardrobe on an internal wall. The heating system doesn’t travel above the ground floor, with upstairs rooms being solely reliant on passive solar gains and recovered heat from the Dantherm ventilation system, onto which Sheridan plans to install a post heater.

Heating costs: Estimated at €220 based on PHPP-calculated space heating demand at assumed night rate electricity tariff of 9c per kWh.