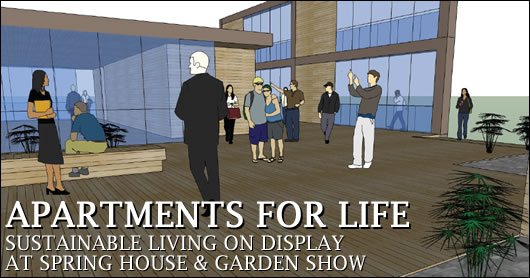 Architecture is one of the few disciplines that is truly both an art and a science – O'Mahony Pike's contribution to the Spring House and Garden show suggests that the discipline's third pillar is the realm of ideas.


Beyond the singleton society
Central to this year's Spring Home and Garden exhibition will be a pair of show apartments, located in the centre of the pavilion. Designed by O'Mahony Pike, the apartments do more than just show off a range of new interior design trends and techniques, they highlight a form of sustainable design that has been, up to now, uncommon in Ireland.

"The name of the overall idea is 'Apartment living 4 life'," says architect David Smith. "The idea behind it is 'long life, loose fit and low energy'."

The pair of apartments are both identical size but very different in internal layout. Despite this – in fact the point of it – is that the apartments are designed for change over time in such a way that one could be transformed into the other.

One apartment has been designed with a couple in mind, the other for a family. Differences include the more open-plan nature of the couples' apartment and the addition of a central work/play room in the family apartment.

The ultimate goal is to show that apartments can be suitable homes not only for single people, couples and families.

"The plan was to reflect an idea that you could acquire an apartment and live in it for a lot longer that usual due to its flexibility," says Smith.

Both apartments feature a utility area running along one side, comprising a kitchen, bathroom and so on.

"What we did was develop a simple plan with all of the service and storage along one side. This makes the remaining area flexible," he says.

Clearly, a major emphasis for the show apartments is to provide a model which demonstrates how an apartment can grow with its occupants' evolving needs and be changed to meet those needs without incurring major costs: "The big money in an apartment is moving the service area – the kitchen and so on. What you're talking about [here] is moving partitions."

Smith does have one caveat about apartment life in Ireland – dwellings need to be larger: "Up until now, apartments have been built for a market and built to minimum sizes. These sizes are being reviewed by the Department of the Environment and Dublin City Council. They've looked to average sizes in [continental] Europe and we're way behind."

Despite the fact that apartment living is commonplace in Europe, the average Irish home is smaller than in many other European countries. When combined with the growth of apartment living in Ireland, it is clear that Irish apartments are too small and, as a result, most people are eventually compelled to move out and find a house.

"The average new home is 137m2 in Denmark, 115m2 in the Netherlands and 87m2 in Ireland. That shows you how the number of apartments has outstripped houses," says Smith.

In planning terms, the neo-urbanism characterised by the O'Mahony Pike show apartments is designed to meet a number of serious problems facing Dublin, its residents and its workforce, today: urban sprawl, traffic congestion and overly long commutes.

The problem of traffic congestion will be obvious to anyone who drives in Dublin today while anecdotal evidence suggests that commuting is putting ever more pressure on workers who reside in outlying areas. Both are exacerbated significantly by urban sprawl which has grown to the point where Greater Dublin has ballooned to include not only County Dublin, but also large parts of counties Meath, Kildare and Wicklow. In October 2006, the European Environment Agency described Dublin as a “worst-case scenario" of urban planning and is suggesting its use, alongside Madrid, as an explicit model to be avoided in rapidly growing EU ascension states. 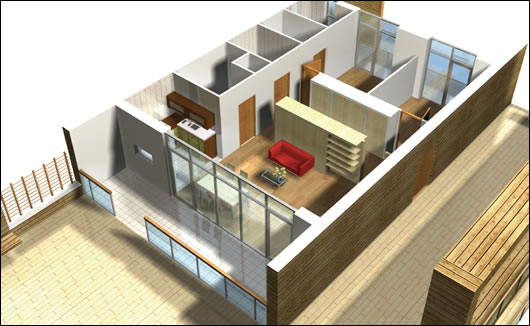 Computer renderings of the two apartment types on display at the Spring House and Garden Show over St Patrick's weekend. The family apartment (below) can be achieved simply by adapting the starter couple apartment (above), with the design and location of services to allow easy adaptation 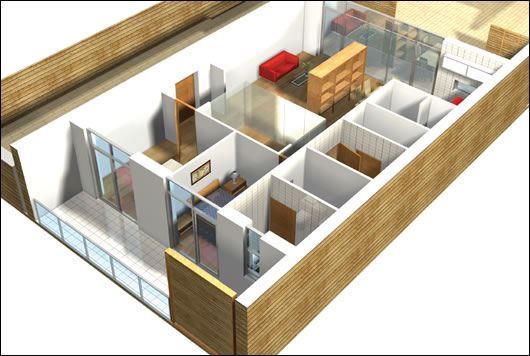 T
he debates about urban sprawl go back decades, as far back as the development of the first suburbs in the England of the 1920s. During this and the following decade, concerns about so-called 'ribbon development', the practice of building homes along arterial routes, reached proportions similar to today – but for a very different reason.

It should not be forgotten that England's "Green Belts" were devised as a model not for environmental sustainability, but for preserving one of the last remnants of Britain's undemocratic, feudal past: aristocratic ownership of land. Despite their ex post facto reinvention as an environmental measure, the Green Belt was actually conceived as a way of keeping the proles out of the countryside. Whatever one’s feelings about suburbia, such anachronistic and reactionary measures are not transformed into progressive ones by applying them with a patina of environmental verbiage.

With regard to Dublin, it is nevertheless the case that, for many people, the commute and the congestion have come close to being unbearable. As a result, reconsidering how one can live in the city may offer great benefits to those currently faced with a three hour drive along the gridlocked roads that lead into the capital replete with toll gates.

Still, if cities are to be properly reclaimed as living spaces then change is undoubtedly needed and there will be some need to overcome the antagonism between the city and the countryside. The key advantages of rural life – space and greenery – must be incorporated into urban life.

"We should think of it as a challenge," says Smith, noting that it is not always desire, but need, that pushes people out into suburbia. "The real problem Ireland is facing at the moment is the daily commute – people are living and working in very different places. Dublin almost has [concentric] price rings as you move out.

"In order to overcome that we have to look at higher densities. The whole idea is to solve a problem of life and work – balance of life – and for city living, you're talking about apartments and duplexes.

Smith is quick to dismiss the idea that higher-density living is tantamount to overcrowding and notes that well-designed apartments in quality urban environments are a world away from the problem areas of the past: "You're not asking people to live in slums or tenements, you're providing quality at higher density."

He also points to the fact that other countries have got this right where Ireland has failed: "We're not starting off a blank page," he says. "Go to any European city, especially Amsterdam and Paris, and people live in apartments. [The difference with Ireland is that] It's about quality, amenity, size, private open space and public open space." 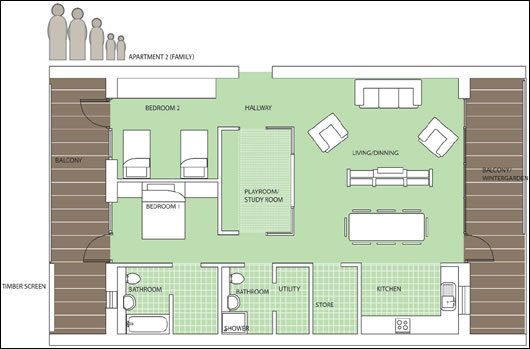 Sustainability on show
Beyond the issue of reducing car dependency by urban living, the apartments themselves are also proposed as sustainable forms of architecture. "Low energy use is as much a part [of the idea] as flexibility of space," says Smith.

"Due to the time constraints, we can't build these show apartments as 'low energy' dwellings, but what we can do is demonstrate the theory," he says. To this end, the apartments will feature plasma screen displays demonstrating ideas in insulation, energy efficiency and other related issues.

O'Mahony Pike's plan is not to sell these apartments – after all, they don't truly exist. However, they do want to sell the idea of better quality urban housing to the public.

The practice has noted that construction type, and the materials used, have an enormous effect on energy efficiency, and has paid particular attention to issues such as insulation and air-tightness. The desire is to combat heat loss through the walls, floor and roof and suggested insulation materials include sheep wool, wood fibre and cellulose, derived from recycled newspaper.

Also proposed are high-quality windows that provide good U-values with double or even triple glazing, wintergardens and district heating.

The final piece of the energy puzzle is renewable energy. A document drawn up at the proposal stage states: "Management charges can be minimised by using a photovoltaic [solar] system providing power to common areas. Any excess power is fed back into the electricity grid.

Beyond energy use, the show apartments aim to demonstrate environmentally sound practice in other areas. For example, O'Mahony Pike are proposing the use of low-impact construction materials such as independently certified timber from well managed sources.

Water sourcing and usage has also been considered. The plan for the apartments calls for 30 per cent of water used in the home to come from non-potable sources such as rainwater harvesting or grey water recycling systems. Residents would use stored rainwater for toilet flushing, balcony taps, topping up the swimming pool and car washing, thus easing the burden on the water mains.


In total, 55 per cent of water used in the complex would come from rainwater harvesting and reuse, including water used in sub-surface irrigation of the garden.

Most of the water collected on terraces and in the courtyard, as well as roof runoff, would flow along a sculptural gutter edging the solar terrace to be stored in a tank for later use in toilets and gardens.

Ambitiously, there is also ongoing consideration of strategies for treating black water on site.

Quizzed on whether developers can be actually convinced to build such environmentally conscious and low-energy homes, Smith replies: "It's not unrealistic. With the new energy audit system now in place things are beginning to change.

"We're seeing clothes-drying being added to planning applications. You can't just say: 'We'll put in a dryer'," he says.

Smith is confident that the landscape of architecture and construction can be changed, but feels that expectation is central to it: "Development is market-driven – let's face it, we live in a market-driven economy. To a certain extent, [Irish] people are not as demanding as their counterparts in Europe. [The idea is] to up the ante – get people to say 'maybe I should expect more'.

"The show apartments aren't a sales brochure for a development," he says. "What we're trying to do is create an expectation in an apartment by the creation of ideas."

The O’Mahony Pike apartment designs will be on display at the Myhome.ie Spring House and Garden Show 2007 from March 16-19 in RDS Simmonscourt.

The show will also feature the Eco Smart feature in conjunction with Construct Ireland and EASCA, where visitors will have the chance to learn more about the latest in sustainable building.

To find out more about visiting go to www.spring-house-gardens.com