Despite its stop-start beginnings, this cottage in the west of Ireland delivers a traditional-but-stylish design with close-to-passive performance.

This super low energy project, built on a remote site in rural Galway, almost didn’t happen. Architect Lester Naughton explains that when the client bought an old cottage on the site, the initial plan was to extend it.

“Somewhere in the mix, they decided to demolish and start it new. They got the blockwork up to wall plate level and next thing an enforcement order arrived from the council. Someone had complained, and when the client went for retention on what had been built, that was refused.”

It was at this point that Naughton got involved. Interestingly, the approach came through the Simon Open Door initiative. This is a joint venture between the Simon Community and the RIAI, where architects around the country offer a one hour consultation in exchange for a €50 donation to Simon. 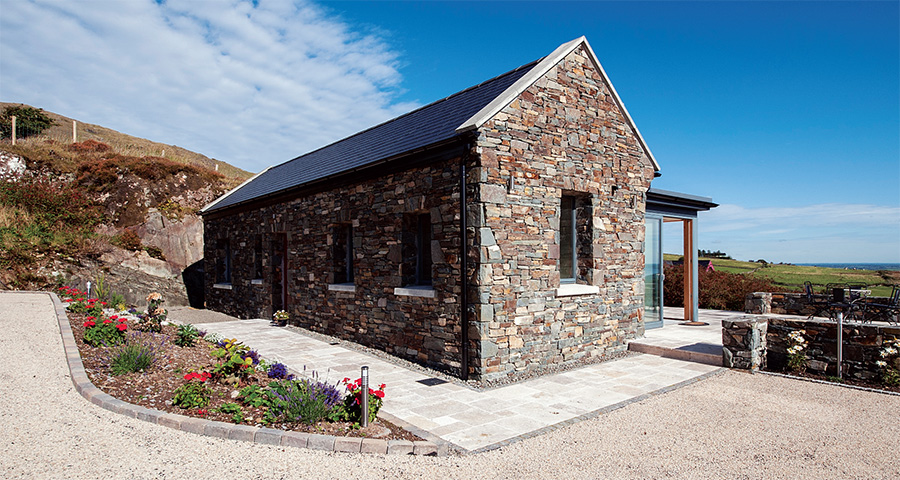 A lengthy engagement with the planners finally resulted in permission to build an almost exact replica of the original cottage. “A house for a house,” says Naughton. The one concession he secured was that two outbuildings which had also been knocked, could now be extruded a little further than before, and incorporated into the dwelling space.

“Visually,” says Naughton, “it was much the same as what would have been there. I worked from limited photographs, and there was a survey that was done by someone earlier on that we took as a baseline.”

Initially, he only set out to build to regulations, but a discussion about how the house might be heated raised the passive house concept. The idea appealed instantly to the client, who preferred not to be identified for this article.

“First and foremost,” she says, “I’m a cold person and being miserably cold in the west of Ireland wasn’t an attractive proposition.” She also cites the rising cost of fuel, the beauty of the location and the environmental imperatives as motives behind the drive to go passive. “Also, it’s on the side of a hill along a very narrow road that isn’t well maintained by the council. Between the prospect of running out of oil, and even just having to store oil in a place like that, it just didn’t seem like the right thing to do.”

Naughton got in touch with passive house experts MosArt in Wicklow, who supplied consultancy on the build. He also completed one of MosArt’s passive house design courses.

Straightaway, it became clear that this would not be a straightforward project. Stringent planning conditions meant that there was only so much that could be done to realign glazing and adapt the design to best suit passive house. On the upside, the house was already oriented towards the south. 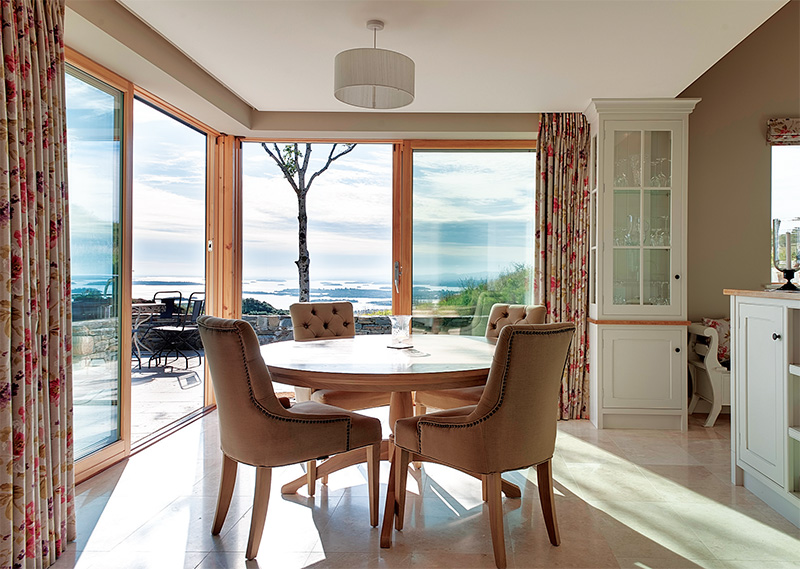 “Things like solar gain weren’t invented yesterday,” says Naughton. “There was one little window that faces north and that was more or less there anyway.” But while those traditional forms – cottage and shed, tied together by a glazed element – found favour with the planners, they did create a number of headaches, not least trying to get airtightness down to passive standards.

Contractor Peter Wall hadn’t attempted a passive build before, which meant that he and his team faced a steep learning curve. “It was a tough house to do,” he says, “and not that it was a big house but the design of it; it was almost divided in two. If you had a house with four corners, it would have been much simpler. So it was very painstaking, you couldn’t rush it.”

When Peter’s team began work on the existing walls, they found that they were not up to standard, so the decision was taken to demolish, leaving them with just the existing slab. Naughton liaised with MosArt in drawing up details to deal with thermal bridges. It was decided that the slab would now be treated as a base layer, on which 350mm of Xtratherm PIR was installed. This insulation was then extended up the inside of the external walls at a thickness of 100mm and below the rafter line at 75mm to create a continuous insulating layer. The 100mm cavity itself was pumped with bead. 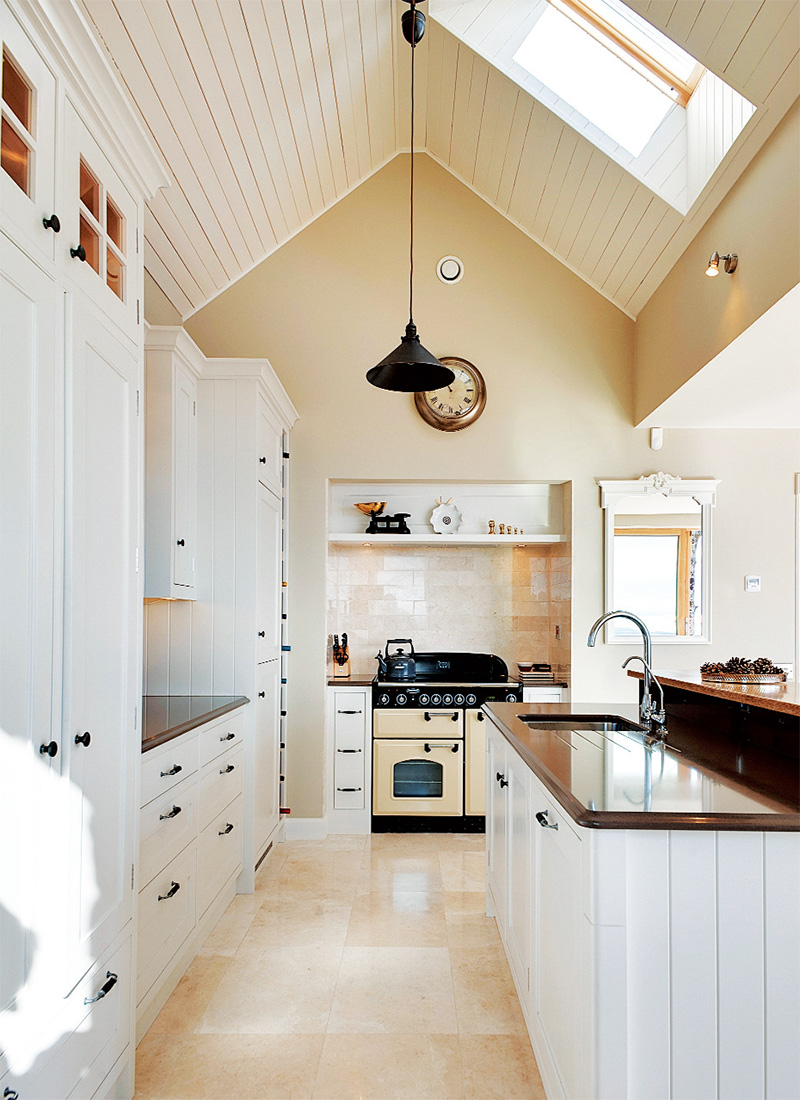 In order to minimise thermal bridges, internal walls were cut back at the point where they met the external walls, to allow a continuous layer of both insulation and air tightness membrane. In the same vein, ridge beams were finished to the inner leaf to prevent breaking the insulated seal.

The first blower-door test returned a result of around one air change per hour. Subsequent improvements to some of the weaker elements brought that figure down 0.82 ACH. At that stage, the project had overrun its completion date by several months, and the client decided that rather than push for the passive standard of 0.6 ACH, she would take the hit and complete the project.

“You’re very much up against it with a building that has a lot of surface area to floor area,” says Naughton. “If I had a 200 square metre two-storey house in a cubic form there would be that much more forgiveness.”

The client, who uses the house as a base when she’s in the west, moved in two years ago. She pays tribute to the knowledge of the architect and the workmanship of the contractor. “I have to say I absolutely love it,” she says. “I’m constantly delighted I made the decision I made to bring it up to passive. It’s the comfort levels, just the fact that the weather can be doing whatever it likes outside, it’s always perfect inside.”

Thermal bridging: due to planning constraints the building retained an existing foundation slab so thermal bridges were avoided with an internal line of insulation around the structure. 350mm of PIR insulation was placed over the existing slab returning up the inside of the external walls 100mm thick and below the rafter line 75mm thick, all forming a continuous line. Where internal walls extended to the existing foundation slab they were in Quinn-lite B3 blockwork. On external walls the internal line of
blockwork was kept back and 50mm of PIR board was returned across the cavity. Internally insulated plasterboard was returned into the windows so as to overlap the window frames and reduce thermal bridging as much as possible. Thermal bridges were not calculated but judged to be thermal bridge free (at least as relevant to PHPP calculation methods). For the purposes of DEAP the details were assessed as being equivalent or better than the Irish accredited construction details. Ground floor: 100mm screed on 350mm PIR insulation on existing structural slab. U-value 0.06W/m2K (0.080 W/m2K when not adjusted for ground effect).