How can a house embrace passive solar principles when all the sun’s heat and light is to the south — but all the best views are to the north? This striking home on the Connemara coast employed some clever solutions.

Mulcaire Heffernan’s latest project in Connemara drew on the skills of a highly experienced design team to create a building that doesn’t compromise on anything. Despite a hugely challenging site, the house manages to take full advantage of its setting and still deliver passive standards.

Sitting at the end of a narrow road, the sloping site is home to an existing cottage perched right on the edge of the Atlantic Ocean. It’s exposed, inaccessible and during the Christmas storms, it took a ferocious battering.

Contractor Niall Dolan of GreenTec Ecological Homes says that despite the fact that part of the road leading from the house was actually washed away during the storms, the client was blissfully unaware of how bad the weather actually was. “They didn’t know it was even windy outside,” he says, “because inside in the house with the wall build-up and triple-glazed windows, they were completely protected.” 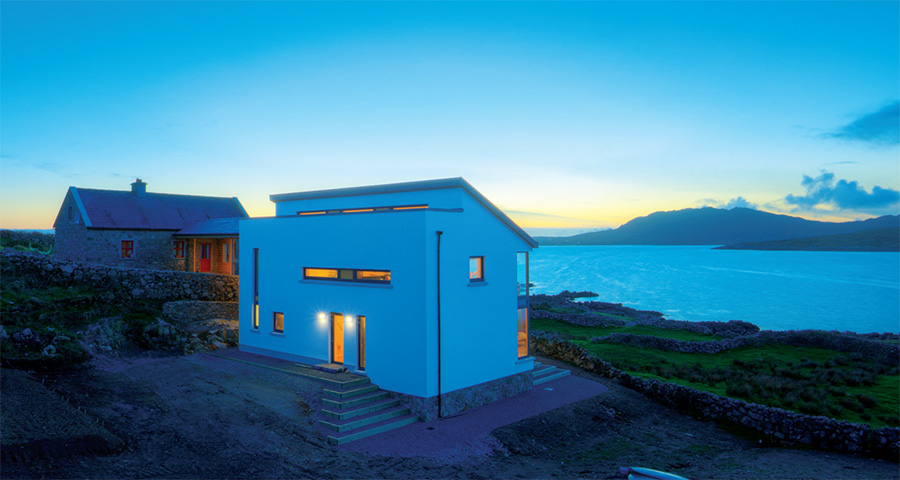 The client wished to retain the existing cottage as an annex, which essentially made this a new build project. The first difficulty facing the design team, in addition to the exposed nature of the site and its inaccessibility, was the fact that it faced exactly the wrong way.

“The classic dilemma,” architect Eugene Mulcaire explains, “is you have these terrific views literally facing true north. All our solar energy is behind us.” Moreover, the site’s unwieldy situation made a conventional design problematic. How to create open, light-filled living areas and at the same time respond to the landscape’s natural contours?

The solution was to turn the building upside down, placing the living areas on the upper floor and the bedroom spaces downstairs. 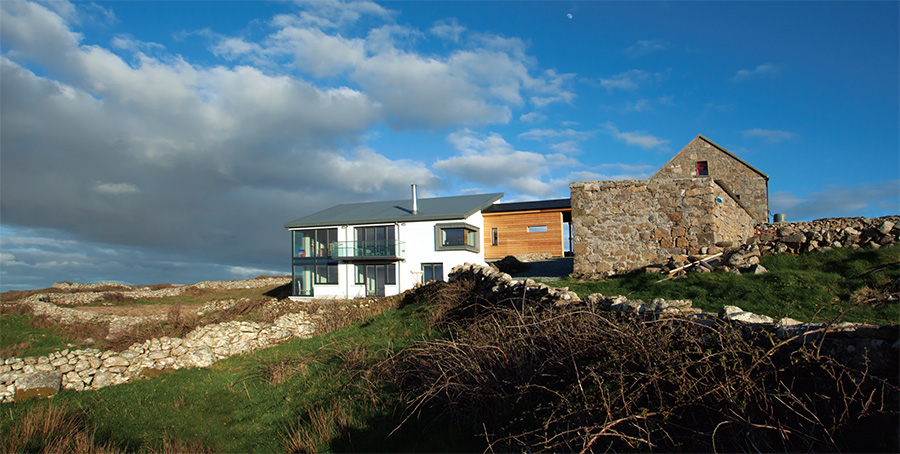 “The road to which the building relates is elevated over the landscape,” says Mulcaire. “There’s a very old retaining stone wall, probably about a storey tall which means we come in off the road onto the entrance level...We played with that a little bit, so that the building is approached by way of a bridge just to accentuate that idea of being elevated over the landscape.”

Achieving a low energy build was as important to the client as capturing those great northern views. But conventional wisdom tells us to keep glazed areas to an absolute minimum on that elevation in order to maintain a high performance building envelope. Meanwhile, there was nothing to see on the southern elevation, where all the passive solar gains lie.

The architects came up with an elegant solution. They took a monopitch roof, then elevated the southern edge to create a clerestory consisting of high level ribbon glazing which overlooks a narrow flat roof. A white membrane on this roof converts it into a light shelf, which amplifies the southern light, directing it up into those high level windows which overlook the vaulted living spaces below.

In addition, the southern elevation features long, slot windows which are very precisely positioned to deliver light directly to kitchen worktops in one instance, and to the stairwell in another.

With the living spaces now flooded with southern light, the next step was to tackle the northern views. The solution here was simpler.

The lean to roof includes 225 timber joists, which were pumped with cellulose insulation; an Ampac Ampatop Protecta membrane & tapes; and a 100mm service cavity with Sheep Wool Insulation inside the airtight layer

“From day one,” says Mulcaire, “we pointed out the orientation contradiction to the clients and they were more than happy to invest significantly in a window package.” They chose triple-glazed timber aluclad windows from True Windows in Sligo, which deliver a whole window U-value of 0.92. Mulcaire believes that any successful project needs to flag big ticket spends like these at the earliest stage possible. “Before even committing to specs, it’s incumbent on the low energy design team to flag these contradictions and these hotspots and get a buy-in from the client very early.” The window spec features double height glazing that turns the corner on the northeastern corner and a zinc-clad oriel window in the northwest.

One of the design issues thrown up by the fact that the house is inverted is that you lose the direct, natural connection with the outside. A balcony is an obvious solution, but a balcony creates a major headache for passive house designers. Any cantilevered structure, particularly one as large as a balcony, represents a major interruption in the thermal envelope. Not alone do you have a cold bridge to deal with, getting it airtight is also difficult.

Niall Dolan of GreenTec took responsibility for managing both thermal bridging and airtightness. He says that the Letterard house was one of the trickiest he has ever worked on, due primarily to the design features that had to be introduced to deal with the house’s orientation and layout dilemmas. He explains that the balcony issue was addressed by using a customised product from Armadillo NV. “We used a special anti-cold bridging plate called Armatherm, which is a flange plate that goes in between the balcony and the receiving plate.”

Installing the long-span slot windows also required a lot of what Eugene Mulcaire calls ‘hidden structure’. Wherever possible, the steel systems were installed so that they didn’t cross from outer to inner leaf, and so didn’t break the thermal envelope. 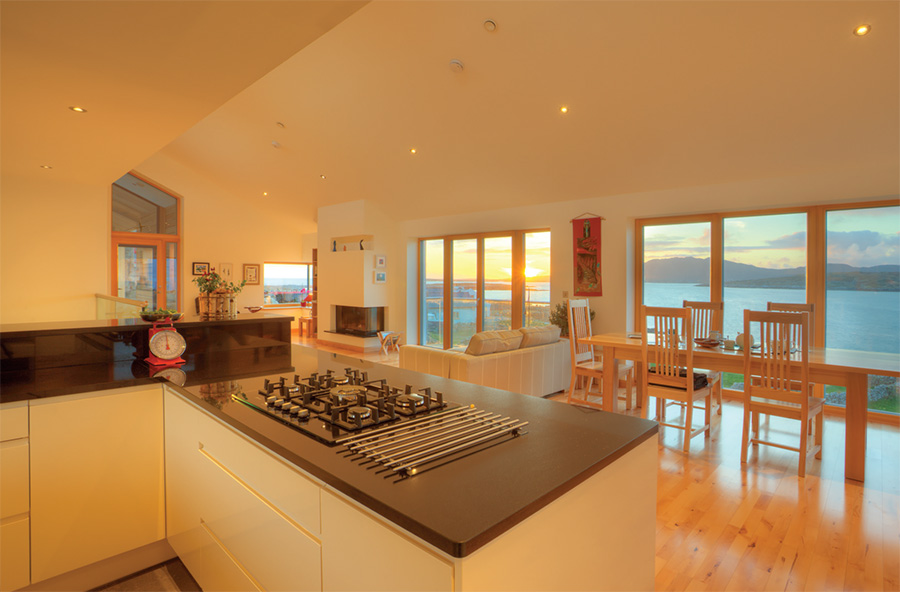 The build method chosen was traditional with a twist: block, but with an extra-wide 250mm cavity pumped with EPS platinum bead insulation. Though other forms of construction were considered at design stage, blocks were chosen primarily because on the one hand they deliver the thermal performance required, and on the other, a block built house relies on local skills and suppliers.

“My background is commercial,” says Mulcaire, “and what I’ve found over the years is that you can bring in clever curtain walling and low energy systems only to find out that the backup systems can be as remote as London or Berlin; all of a sudden, you have a big problem on your hands.”

“When you can plug into local skills pools and local supply chains, you’re going to get a bit more security attached to your endeavour.

Building in this environment and terrain brought all kinds of logistical difficulties. Getting sand down to the site required two diggers; one at the top of the hill to scoop it from the truck, and one at the bottom of the hill to scoop it onto the site. There was no room for the crane which would usually be used to position the hollowcore concrete floor. Instead, each slab was manoeuvred into place using a tracking machine. In order to prevent the airtight membrane from tearing during the process, Dolan used rolls of heavy-duty DPC to cover and protect it.

High winds meant that the membrane itself had to be weighted and temporarily fixed to the structure during the build, just to keep it from being whipped away, while blocklaying was routinely postponed, again due to the severity of the wind.

The wet-plaster finish acted as the primary airtight layer. A range of additional details were required to get the building down to the passive target of 0.6 ACH. Niall Dolan estimates that over 2km of sealing tape was used, in particular on the aforementioned structural details. Ply boxes were used behind the windows to close the cavities, and here again, extensive use was made of airtightness tapes to provide the required seals. The first and only blower door test registered a result of 0.56 ACH, comfortably inside the passive house target.

The clients decided early in the project that while they would aim for passive house standards, they would not seek certification. Eugene Mulcaire says that in recent years, the costs involved in full certification have made it a difficult sell.

“What’s emerging is a lot of willingness to go low energy, to drive the elemental composition as hard as possible. But certifying passive adds to the overall cost considerably, and there’s no real net gain at the moment in the marketplace.” 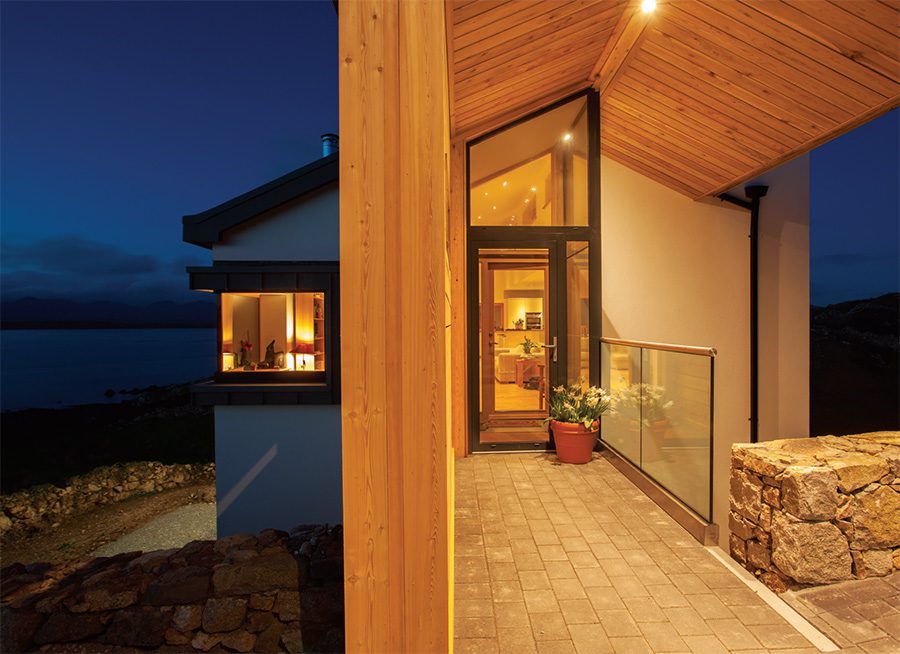 Letterard was one of the last projects that Eugene Mulcaire’s partner in the practice, David Heffernan worked on before his death last December. Heffernan was one of the pioneers of low energy building in Ireland. A softly-spoken, disarmingly modest man, Heffernan was far ahead of the curve on sustainable building. Construct Ireland, the magazine which evolved into Passive House Plus, featured two of his exemplary sustainable projects, perhaps most notably including a substantial mixed-use scheme on Galway’s Forster Street from 2006 that featured passive solar design, external insulation, triple-glazed curtain walling, airtightness, MVHR and renewables amongst other measures.

“Get the basic things right, like orientation, insulation, infiltration, and ventilation,” David Heffernan told Construct Ireland in 2006. “Then you add the active measures.” Heffernan’s legacy makes these words manifest, including pioneering buildings of architectural quality designed to save energy and tread lightly on the planet for decades to come, and an architectural practice equipped to carry on his work into the future.

Thermal bridging: Armatherm bolt-through structural thermal breaks were used on the cantilevered steel balcony. In addition to this the first course of all warm walls are in Quinn Lite blocks. Low thermal conductivity TeploTie cavity wall ties were used throughout. The eaves were also thermally broken using a double wall plate.