The first social housing scheme of any kind to top Ireland’s BER scale, this project is a timely reminder that in the midst of a national housing emergency, it is possible to tackle climate change and blitz the forthcoming nearly zero energy building targets, while housing the most vulnerable in society in healthy, fuel poverty-proof homes predicted to incur zero heating cost.

Extraordinary though it may be in energy performance terms, Linham Construction’s housing scheme at Merville Avenue is on one level a built embodiment of recent Irish history: phase one of the scheme was completed in the death throes of the Celtic Tiger back in 2007, with phase two finally constructed last year. But in other regards the scheme is jarringly atypical.

Although phase one was built at a time when standards on site were evidently at a historic low, numbers 1 to 10 Merville Avenue were a rare exception, a low energy sheltered housing scheme of externally insulated steel frame construction with a communal heating system, built with the support of SEAI’s House of Tomorrow Programme – a grant scheme for house builders in a housing boom of historic proportions, if you could countenance such a thing. Phase two picks up where phase one left off. While over 99% of new homes built last year in Ireland achieved at least an A3 rating, fewer than a quarter of one percent – just 13 new homes – achieved an A1. Five of those were added by phase two on Merville Avenue, replacing one family home with five sheltered housing units, which further enhances the project’s green credentials, by adding density on a brownfield site, without placing pressures on existing infrastructure. 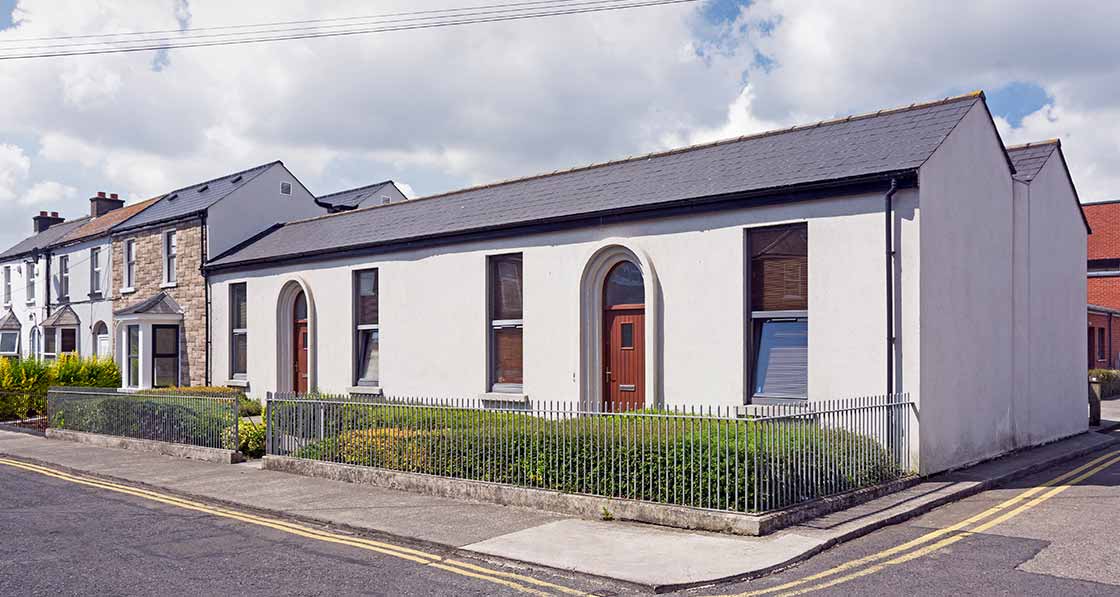 This article was originally published in issue 22 of Passive House Plus magazine. Want immediate access to all back issues and exclusive extra content? Click here to subscribe for as little as €10, or click here to receive the next issue free of charge

The central challenge facing Linham MD Frank Flynn when he began work on the second phase of the Merville Avenue residential development in Fairview was actually getting at the site. A terrace enclosed on two sides by existing houses, the only access was at the rear of the property. Planning restrictions also added complexity: an original three-bedroom house on the site was demolished, but the front wall had to be retained for planning purposes.

Moreover, the ground quality was extremely poor. Conventional wisdom would have dictated the use of a lot of heavy machinery, a lot of concrete and a lot of steel. Instead, Flynn and technical designer Fergus Merriman decided that the key to the project lay in the use of lightweight materials.

The foundation is composed of 350mm Geocell foam glass gravel and aggregate — for which Linham is the Irish agent — under the concrete slab. Geocell is a lightweight, load bearing and highly insulating material that is also breathable and Pyrite-free. It boasts high compressive strength and is made from 100% recycled material. It’s designed to remove the need for strip foundations and rising walls. 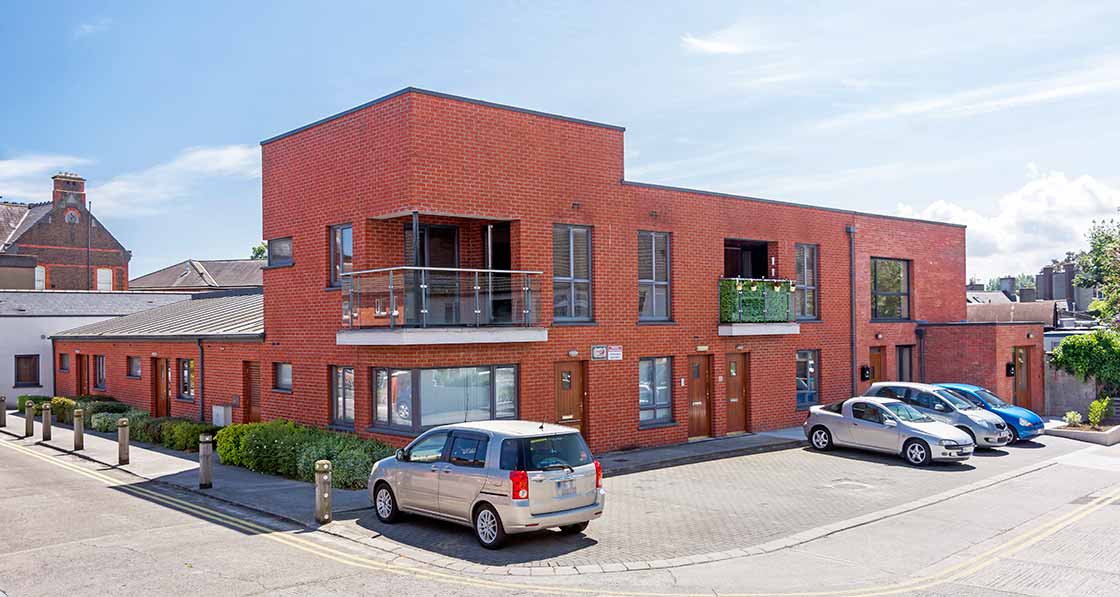 Chartered building surveyor Fergus Merriman says that in addition to providing hardcore, insulation and radon dispersal, the physical weight of the material makes it ideal for a project of this nature. A cubic meter of Geocell weighs just 140kg. The equivalent weight of concrete is closer to 2.2 tonnes.

The ability to manoeuvre it around a small site without the need for heavy machinery is a significant advantage. 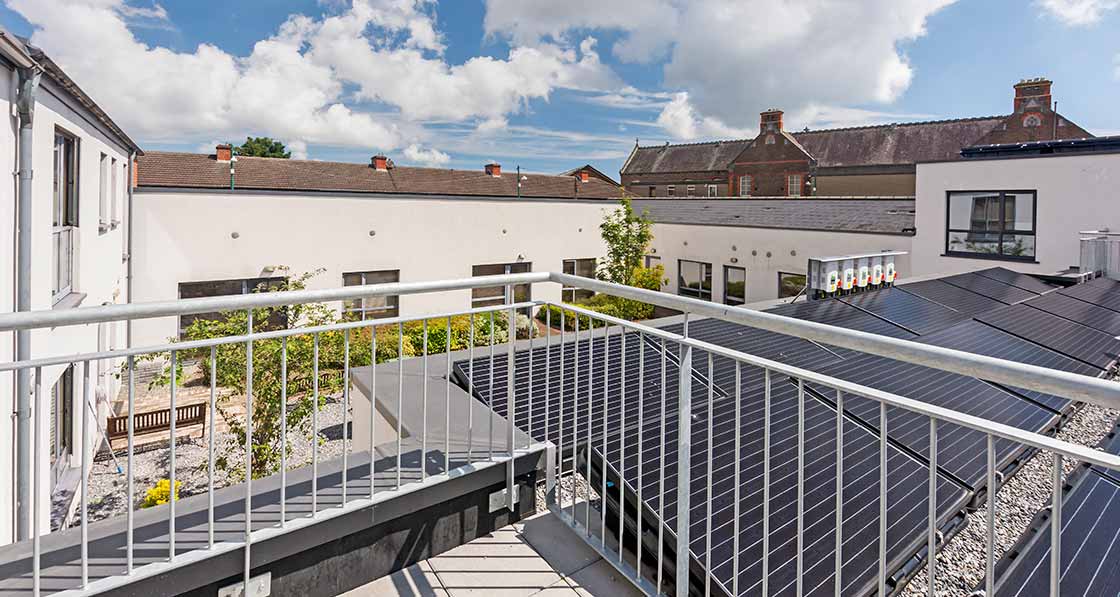 “In terms of green credentials,” says Merriman, “we don’t have to dig out as much, which means we don’t need to take as much stuff away. Also, we don’t impinge on neighbouring structures by driving pilings and making vibrations. You don’t have to worry about neighbours because you’re not digging under their walls.”

The decision to go with lightweight materials was carried through to the wall build up. Merriman specified 215mm Quinn Lite thermal blocks with 200mm of EPS100 external insulation in the absence of an available light gauge steel frame system to match phase one. 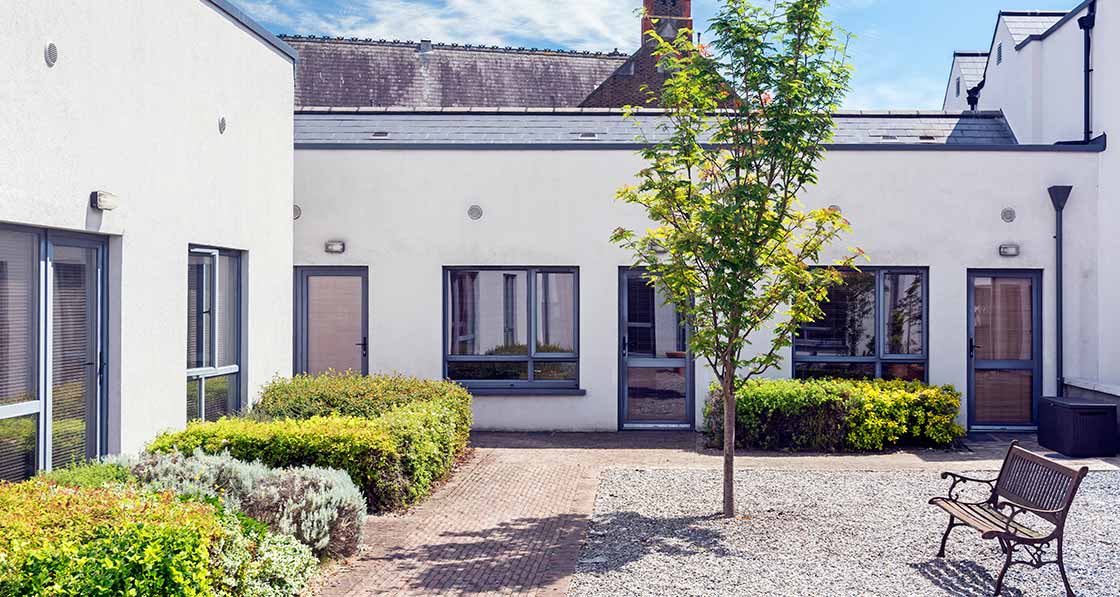 As Frank Flynn points out, the physical weight of the material means you don’t need a crane and you don’t need a forklift. And like the Geocell aggregate, it does more than one job – delivering high thermal properties as well as structural strength.

He also liked the fact that using blocks – and traditional block building skills – gave a measure of flexibility onsite. That’s not to say Flynn is devoted to only building with onsite methods. “One size doesn’t fit all,” he says, “you adapt to your circumstances and your situation and there are good solutions in every case, but offsite is probably the future of the industry.” 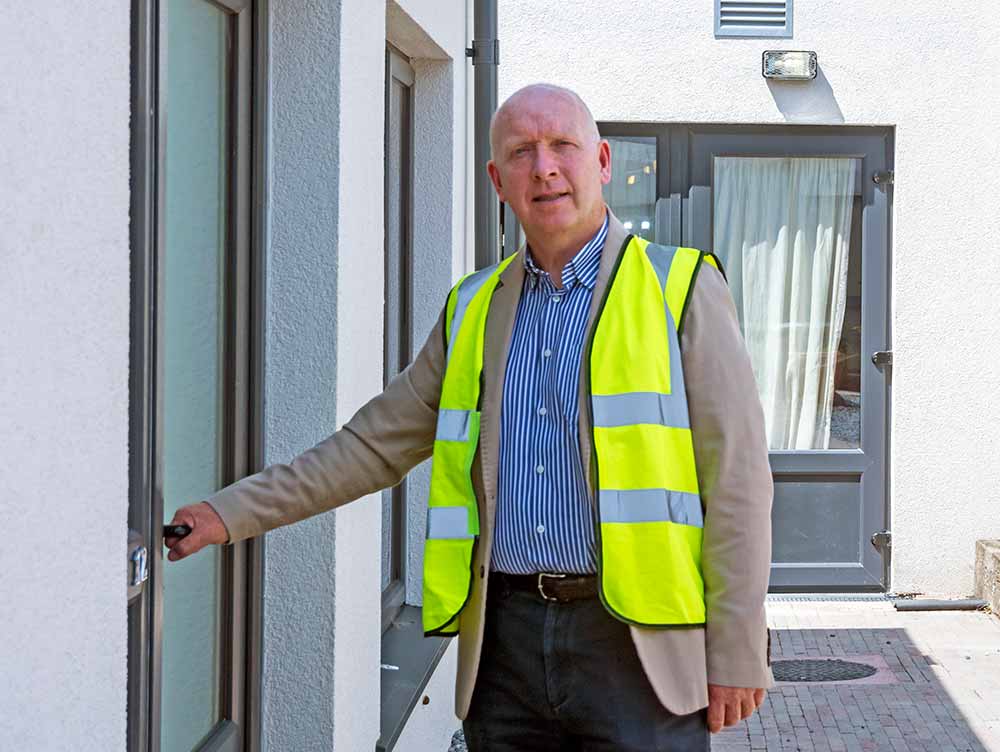 Airtightness comes primarily from an internal parge coat, complemented by a membrane in the roof and tapes at all of the critical junctions. According to Frank Flynn (pictured above), one of the reasons airtightness and insulation specialists Cooper Insulation were selected was due to the firm’s investment in a Wincon unit – a stripped down version of a blower door often described as a “spirit level” for airtightness. This meant Cooper Insulation could test for obvious leakage points as they worked, and thereby ensure the eventual obligatory airtightness tests wouldn’t throw up any nasty surprises, thus avoiding the need for difficult and costly remedial work.

The windows are positioned within the insulation layer rather than the blockwork in order to prevent thermal bridges – although the Quinn Lite blocks permit substantially lower levels of heat loss than conventional blockwork, even thermal blocks are not a substitute for insulation. 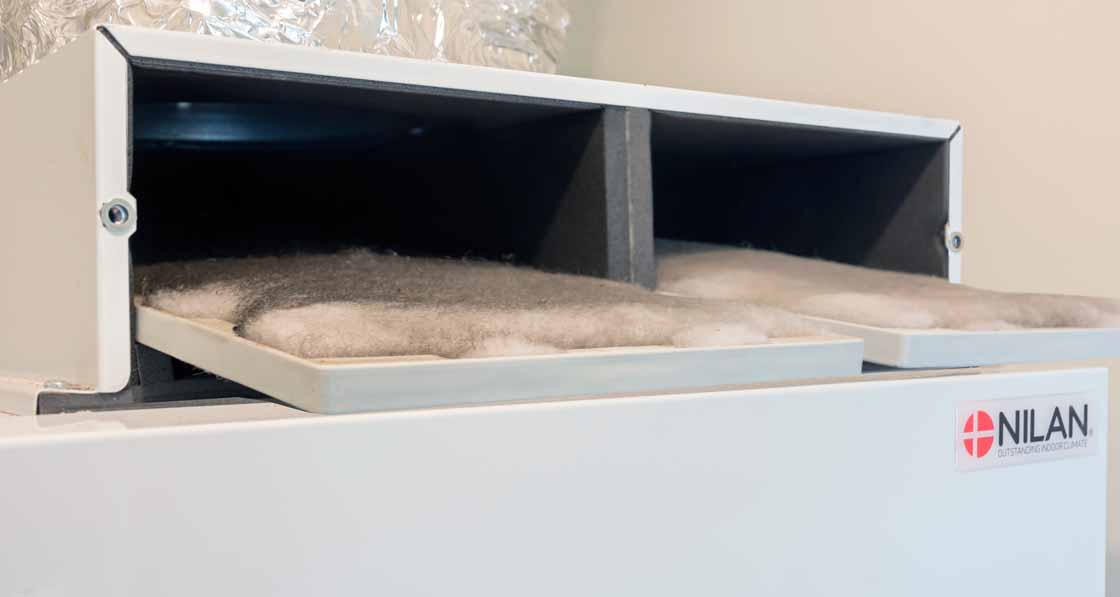 The first phase was heated by a communal heating system consisting of two Alpha Therm condensing gas boilers and hot water cylinders, and the new phase taps into this resource for domestic hot water supply.

Meanwhile, Nilan Compact P units provide space heating, ventilation, and – if necessary – cooling, configured in this project to deliver heat via the ventilation ducts, rather than a conventional water-based heating distribution system of one kind or another. Flynn says that this is the first time he worked with this technology, and admits that he was a little bothered about whether or not it would work as planned.

“I didn’t put in a boiler, I didn’t put in rads – all heat is distributed through the ventilation system – I thought, what if it doesn’t work? So I said I better have a backup plan, and that backup plan was additional electrical power points just in case they had to plug in more heaters.”

As it turned out however, his fears have proven unfounded: so far, the residents who have moved in are all feeding back very positively about their new homes. The five apartments – which had been presold to a housing association – have received A1 building energy ratings. Interestingly, Flynn says that achieving a spec of this quality adds in the order of 10% to build costs. 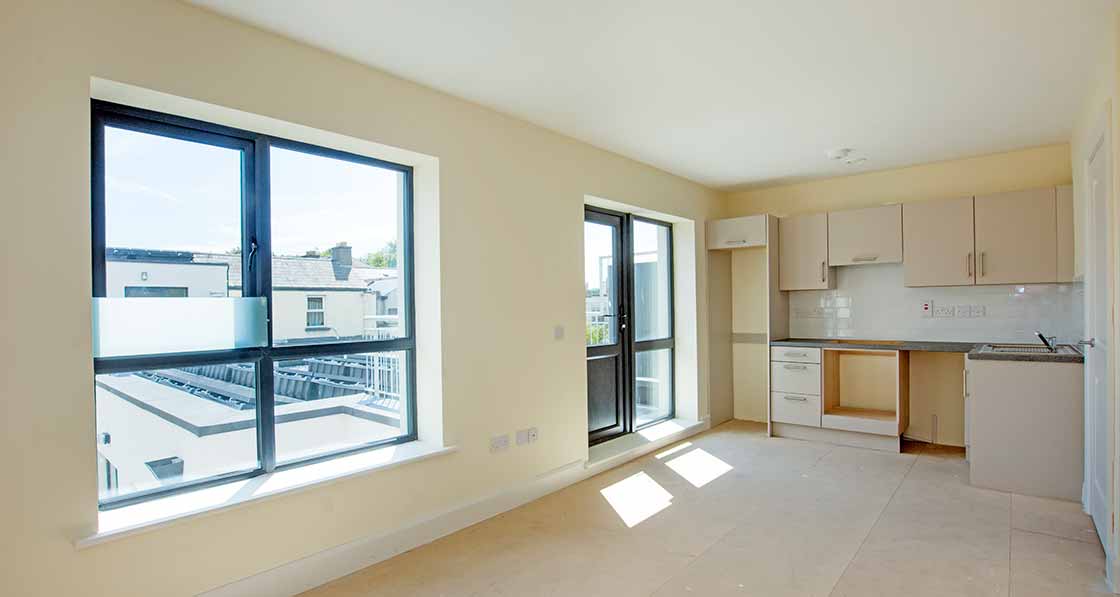 While focusing on higher performance building fabric did much of the heavy lifting needed to achieve the A1 ratings, reducing space heating loads can only go so far, as certain loads counted in Ireland’s national methodology, Deap – lighting, pumps, fans and ventilation systems – require electricity to run, and the electricity figures included in BERs take account of the huge energy losses incurred in power generation and transmission. Onsite renewable electricity generation therefore takes on particular significance, albeit for a significantly lower energy demand in this case.

Flynn opted for arrays totalling 28 PV panels with 300W output each, configured to give as much energy as possible to the apartments, while stopping short of battery storage. The resultant banks of arrays, which came with separate inverters for each apartment, are helping to meet base loads provided by the likes of refrigerators, heat recovery ventilation and appliances on standby, while contributing to seasonal heating loads and, if needed, active cooling from the Nilan system. 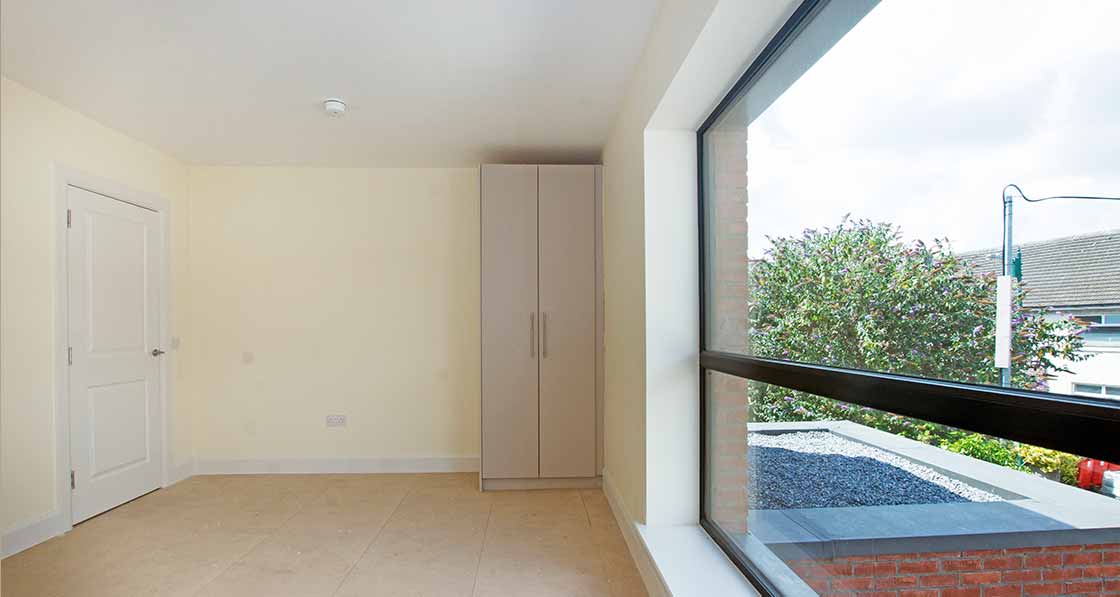 Calculated output in Deap – which PV suppliers Alternative Energy claim understates the PV contribution by some 20% compared to the PV*Sol tool they use – put that contribution on average at 1411W per apartment per year. According to Eoin McGann of energy consultants 2eva.ie, Deap’s new heat pump calculation tool – which is particularly punitive to exhaust air heat pumps, which use much warmer indoor air as their source temperature compared to air source heat pumps – calculates the annual space heating provided by the heat pump at 635.4 kWh.

“This could cover the heating bill twice over,” he says. “50% of each PV system should cover the entire seasonal load of all the apartments with 50% left over to be used for part of the base load.” 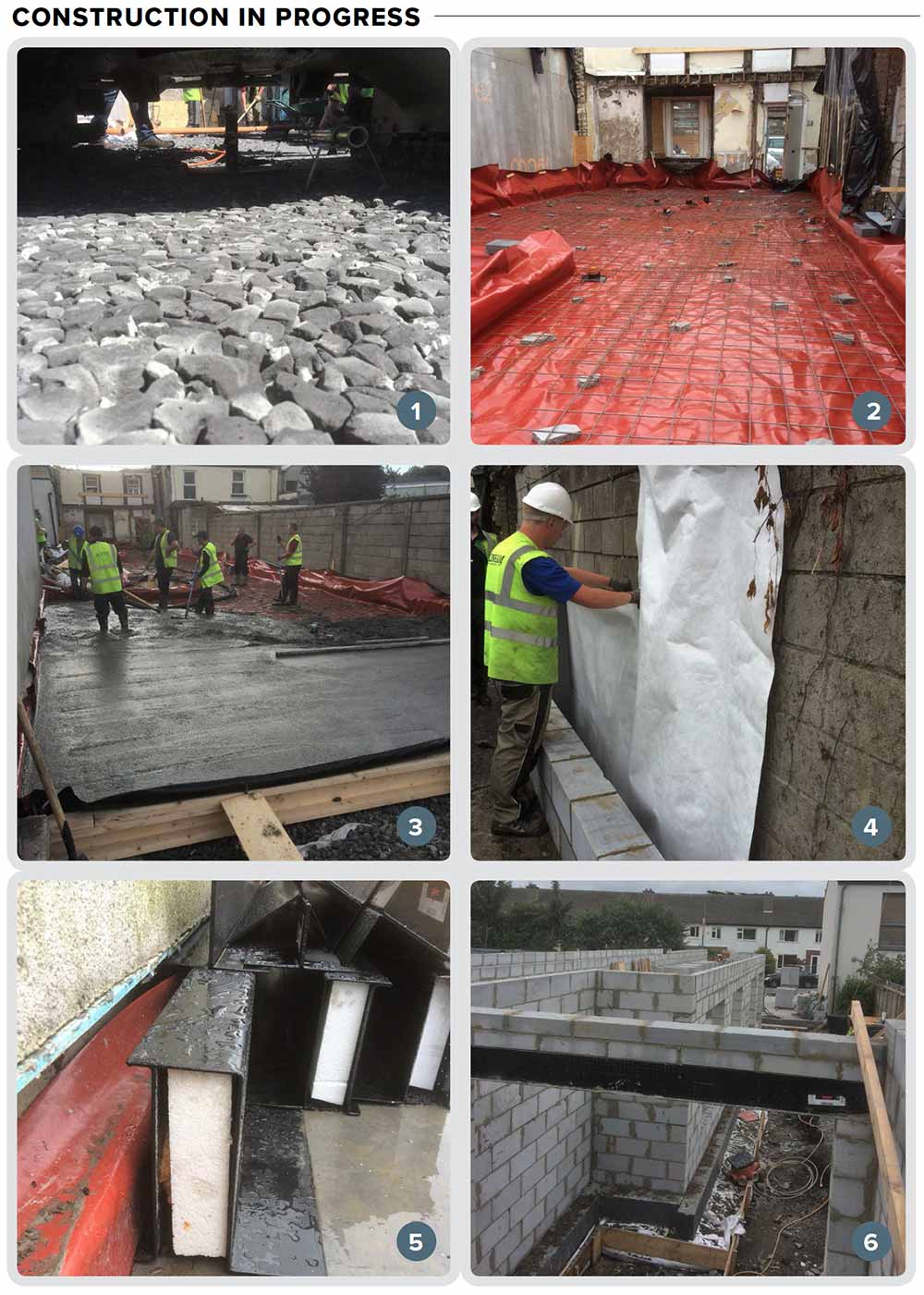 1 The foundation is composed of 350mm Geocell foam glass gravel and aggregate under the concrete slab; followed by 2 a radon barrier; and 3 225mm reinforced concrete with a power float finish; 4 Tyvek breather membrane behind insulation at boundary wall; 5 Catnic thermally broken lintels reduce the potential for heat loss from thermal bridging; 6 The 200mm Quinn Lite thermal blocks improve the overall U-value and reduce heat loss, and are rendered internally for airtightness.

Not all of the apartments are yet occupied, and it’s too soon to draw conclusions about actual energy use. But resident Roseanna Murphy loves her new apartment.

“Talk about a hell of a big difference? I lived in a private flat for eight years and it was very damp. This is my little dream home. I haven’t got one complaint about it. I’ve got central heating and air conditioning. My breathing got a little bit better since I moved in...I couldn’t have asked for better.” 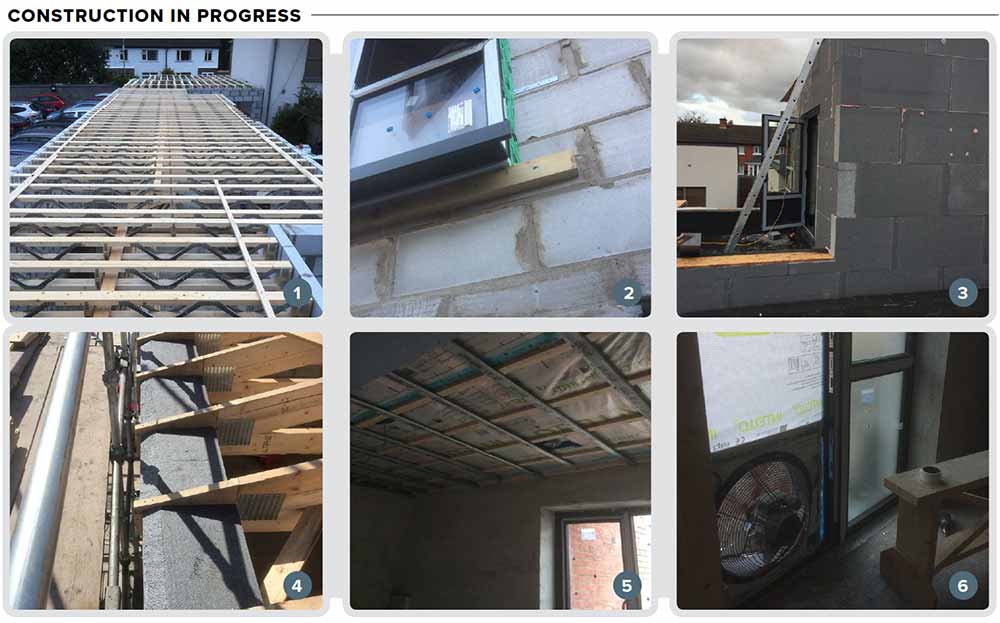 1 Wolf Easi-Joists in the roof for organised installation of services; 2 Windows bracketed externally onto blocks to reduce cold bridging; 3 The walls are externally insulated with 200mm Xtratherm platinum EPS 100 insulation; 4 EPS brought up into eaves to meet roof insulation; 5 Airtight parge coat to walls, with Intello membrane to ceiling and battening for the Gypframe ceiling to contain services inside the airtight layer; 6 Cooper Insulation’s Wincon unit, which enabled the Linham team to test for obvious air leakage points as they worked.

Estimated heating costs: €89/year or zero, calculated based on Deap and assuming an electricity price of €0.14 per kWh. The cost differs based on excluding / including effect of PV array on heat pump running costs, and ignore any additional contribution the PV arrays may make to reduce electricity costs for non thermal loads.The figures are based on temperature assumptions in Deap (Given an average living area fraction for the five apartments of 39.07%, these estimates assume each apartment is heated to 19.17C for eight hours per day during the heating season.)

Roof windows: Two Keylite double glazed windows, one in each stairwell – outside of thermal envelope of apartments.