An award-winning social housing development in South Dublin points to a sustainable way out of Ireland’s housing crisis.

The architects’ department in Dún Laoghaire-Rathdown County Council has done something impressive: by building The Mews in Sallynoggin, a development of four apartments, it has proved that, even in the midst of a housing crisis, we are capable of building homes that are sustainable, comfortable and healthy.

That they are also social housing only strengthens the case.

Unfairly, local authority building projects tend to be the poor cousin when it comes to reporting on construction and development.

Of course, this is not surprising: much architecture coverage, particularly in popular media, focuses on either giant buildings by ‘starchitects’ or else Grand Designs-like one-off houses. Neither is without merit, and ideas do cross pollinate, but neither corporate headquarters nor flashy one-off houses are the be-all and end-all of architecture. 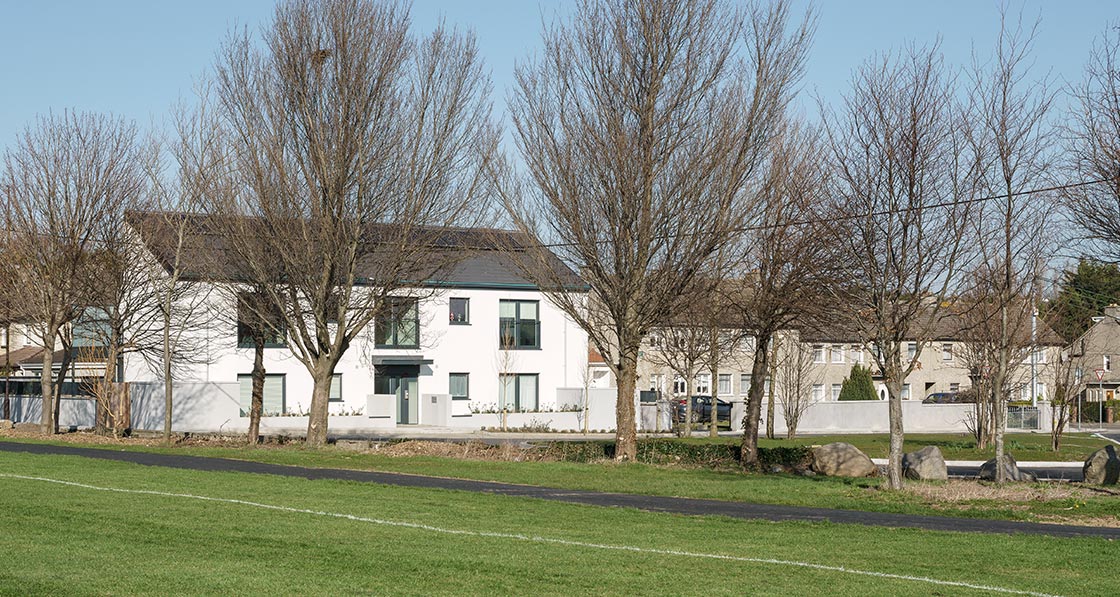 Dún Laoghaire-Rathdown has long been noted as one of the more progressive local authorities in Ireland, both in terms of sustainability and social housing. It was one of the first councils to adopt its own tougher building energy standards locally, back in 2007. Then in 2016, the council introduced a rule that all new homes in the district must be to “passive house or equivalent” standards.

Local authority architect Joanne Maher says that while energy conservation is central to it, the core mission of sustainability is a wider issue, and one that she tries to build into her own work. This includes environmental concerns, but also wider social issues.

“What we were trying to achieve was a social as well as environmental build, [and] what the RIAI [Royal Institute of the Architects of Ireland] felt was that the scheme could be easily replicated, but also [that it] addressed two issues: how to increase housing supply and also what to do about our existing low-density suburbs.” 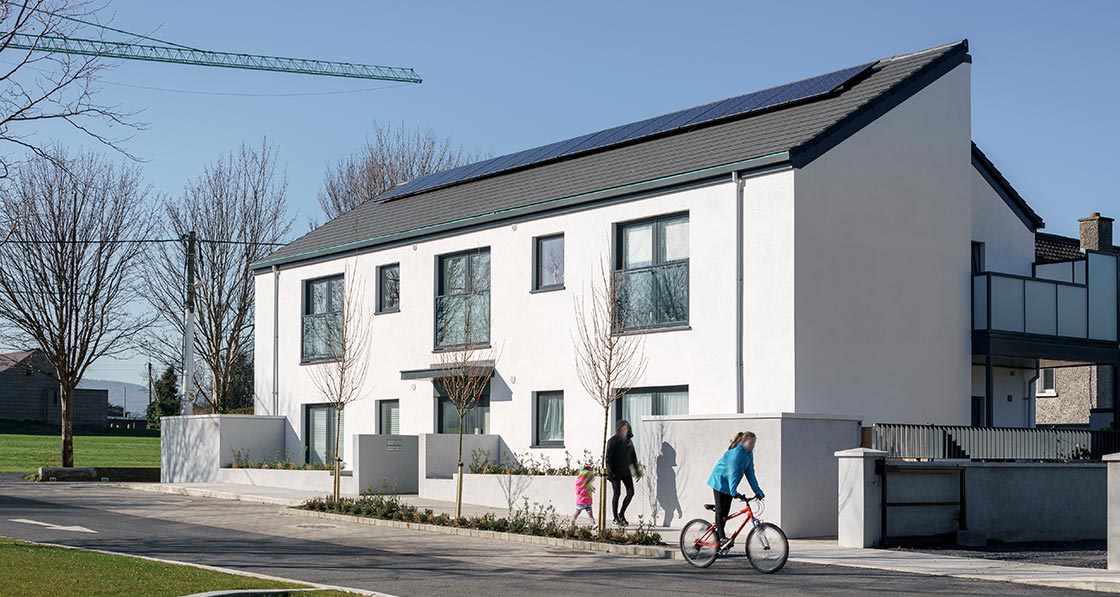 The RIAI’s interest was not just a case of a nice notice: The Mews won the sustainability category at the 2018 RIAI Architecture Awards.

The Mews blitzes Ireland’s incoming nearly zero energy building (nZEB) standard (see ‘nZEB? No problem’), with all the units achieving A1 building energy ratings. And while it did not aim for passive house certification, the spec is for insulation, thermal bridging, airtightness and ventilation — along with the building’s comparatively simple, compact form and sensible glazing levels — are straight out of the passive house playbook. 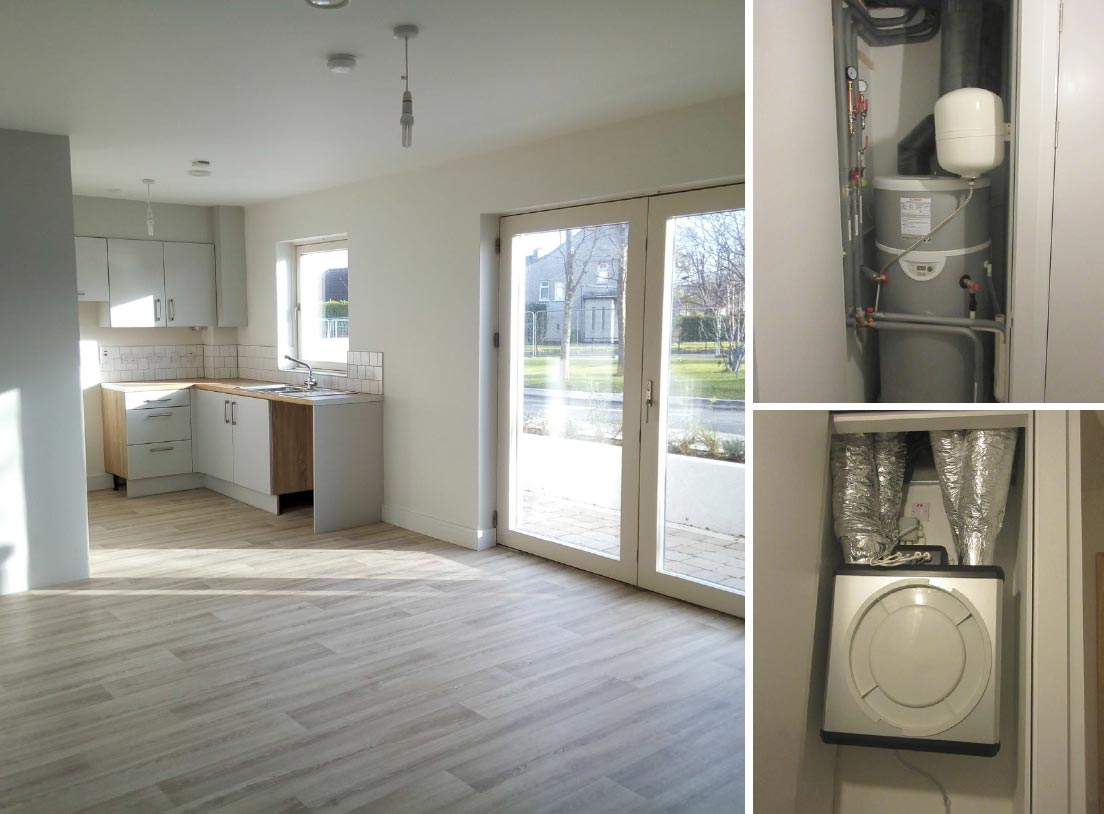 It allowed the residents to stay in their locality, rather than have to move.

Indeed, one of the primary design goals at The Mews was to keep things simple, using traditional cavity wall construction with a strip foundation, for a start.

According to Maher, this was done in order to develop a form of building that does not require massive amounts of re-training for tradespeople on site. “It was intentionally a very simple design that any contractor could replicate,” she says.

“It was full-fill cavity insulation; it’s a straightforward, known system, and because of the compact shape we didn’t have any thermal bridging.” The team used Cavalok BigBlok cavity closers during the build, which provide a frame in window and door openings around which blocks can be laid, while simultaneously sealing up cavities up to 300m wide. 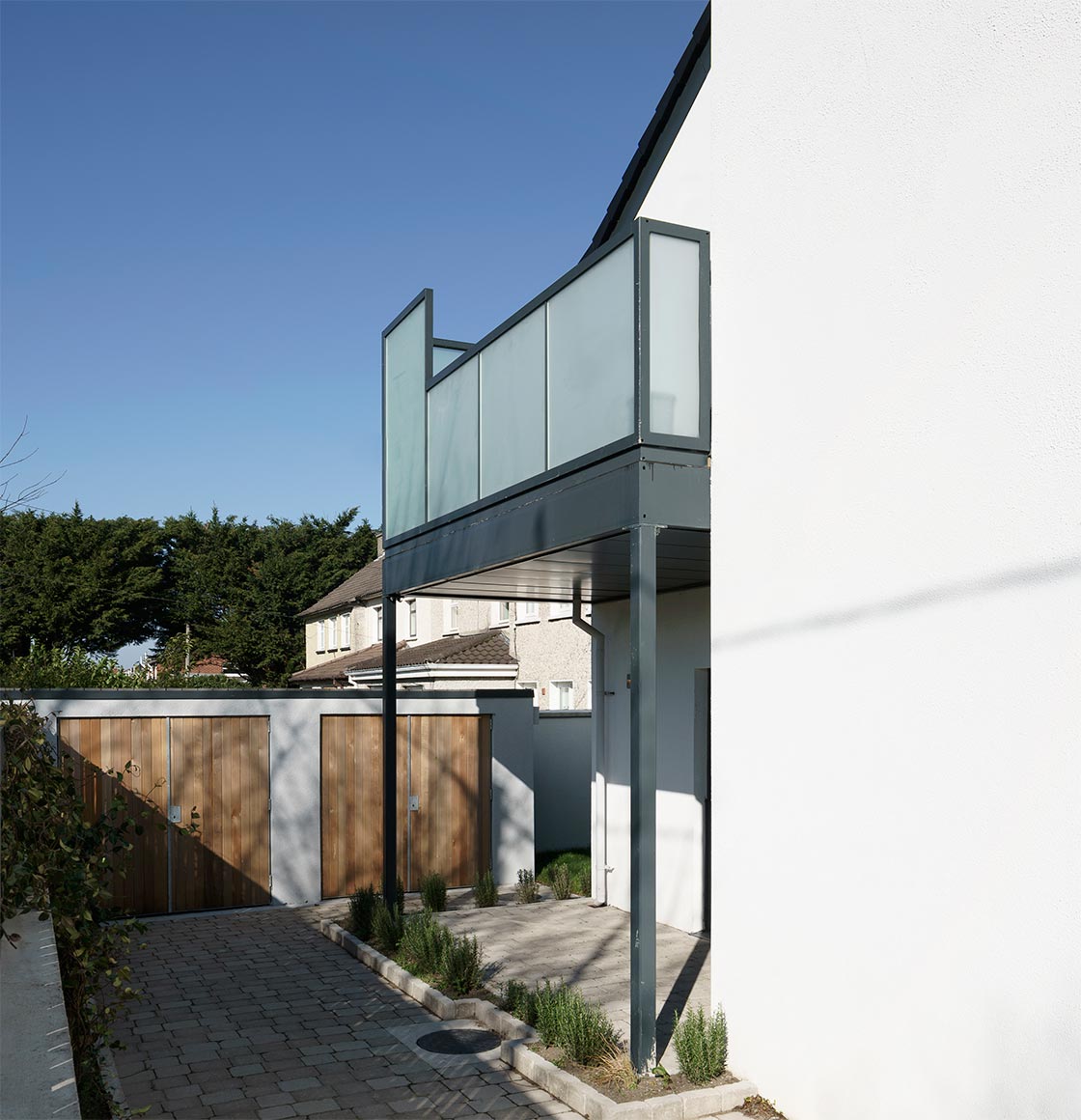 The Mews is as much a model for the future as it is a social housing development.

Issues such as passive solar gain were also considered.

“The building has a 170 square metre footprint [so] it’s quite dense, but in its shape and orientation it’s very simple: it’s a rectangular block with the main orientation to the southwest, with the glazing facing that way and very small windows to the northeast,” Maher says.

“We always think about things like solar gain and loss and cross ventilation.” In terms of buildings services, there is a small Dimplex heat pump generating hot water, and a heat recovery ventilation system. Space heating is provided by four radiant Dimplex electric panels in each apartment, while four solar photovoltaic panels on the roof help to meet electricity demand.

Dún Laoghaire-Rathdown County Council is currently in the early stages of monitoring temperature, humidity and indoor air quality in the dwellings. 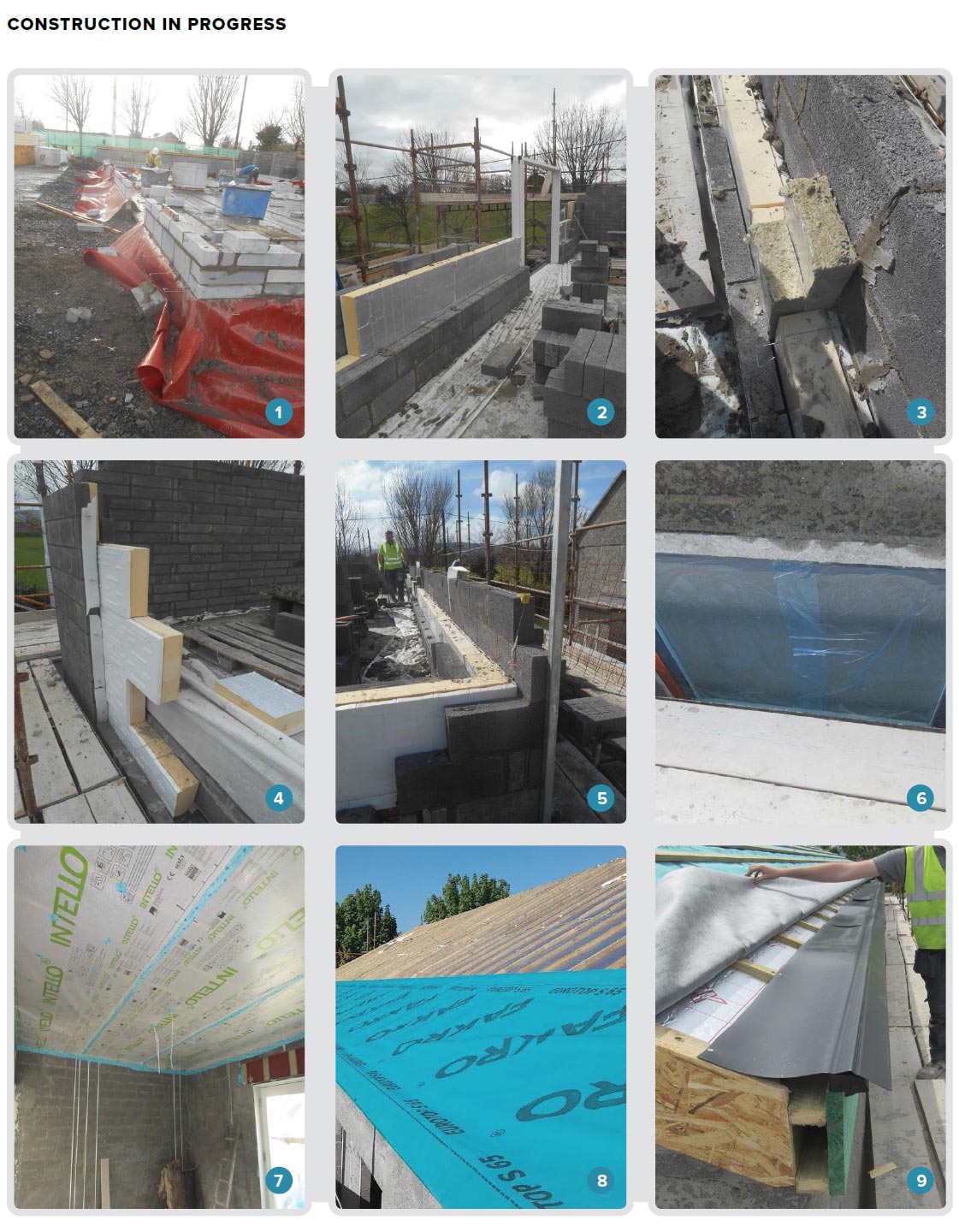 1 The ground floor features several courses of Quinn Lite AAC blocks to minimise thermal bridging, plus a radon barrier;
2 Cavalok BigBlok cavity closers provide a thermally broken frame in window and door openings around which blocks can be laid, while simultaneously sealing up the wall cavities;
3, 4 & 5 the build is traditional cavity wall construction, with full-fill Xtratherm Cavitytherm rigid PIR insulation, a method chosen for its simplicity and repeatability;
6 installation of the triple-glazed Rationel aluclad windows;
7 Intello vapour control layer installed at ceiling level with airtightness taping at seams, where it meets the wall, and at cable penetrations;
8 the Fakro Eurotop S65 breather membrane protects the roof structure against moisture;
9 Xtratherm insulation installed over roof afters under the membrane.

This design simplicity also appears to have paid-off in more ways than simply impressing the majordomos at the RIAI. As a result, The Mews is as much a model for the future as it is a social housing development.

“One thing we were trying to show was that you can achieve airtightness through good detailing and good energy performance through materials, but do so with what was a typical build: we wanted to keep things to a simple way,” says Maher. The construction process itself – oftentimes ground zero for conflict – was also smooth, she says, with a wry joke.

“The build went very well. Everyone was talking to each other at the end, which was really good.

“The contractor hadn’t any experience with passive house or what we were trying to achieve but they were very willing to learn and ready to take it on board. We were very lucky with them,” she says.

Maher strikes a pragmatic note, saying that while new techniques are always welcome, a path of least resistance can also be used to produce sustainability – if the design is right. “No-one is really interested in going out and spending money and learning if they don’t have to. We also had to work within a budget.”

In a way the apartments are modest enough: clean and modern in design rather than proffering the ‘shock of the new’, and intended to belong to the community in a general sense of not being jarring.

This is perhaps the greatest success of The Mews and its designers, though: by thinking in terms of social need Maher and her colleagues were able to create a repeatable scheme that, if widely applied, could go some way to both easing the ongoing housing crisis and also improving the overall Irish housing stock.

Built on a garden site, the building also seeks to address the issue of low density in the south Dublin suburb. As it is suitable for elderly or less abled inhabitants it has a further social function in that it promotes continuity and cohesion.

“It allowed the residents to stay in their locality, rather than have to move out,” she says. 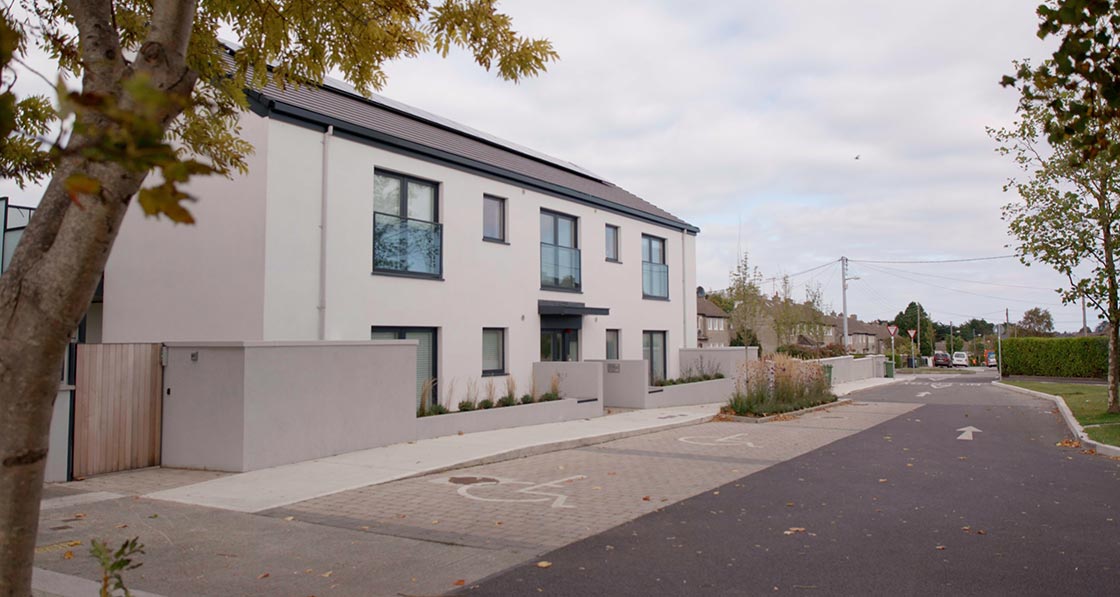 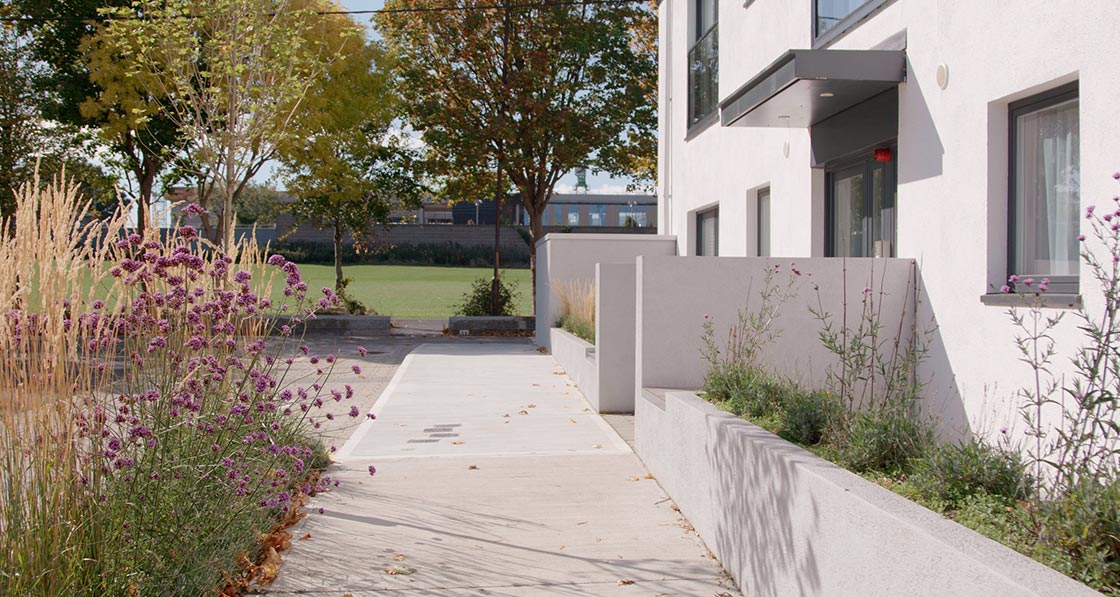 The bottom two units are wheelchair accessible, and all four units feature braille signage, with the designers and council recognising that they needed to think about the occupier in the broadest possible terms: the goal was to give them freedom, Maher says.

“We never know who’s going to use a unit. It was important, for instance, to have turning circles and allow it to be completely open and accessible, and to use materials that were neutral to allow people to put their own stamp on it at as home.” 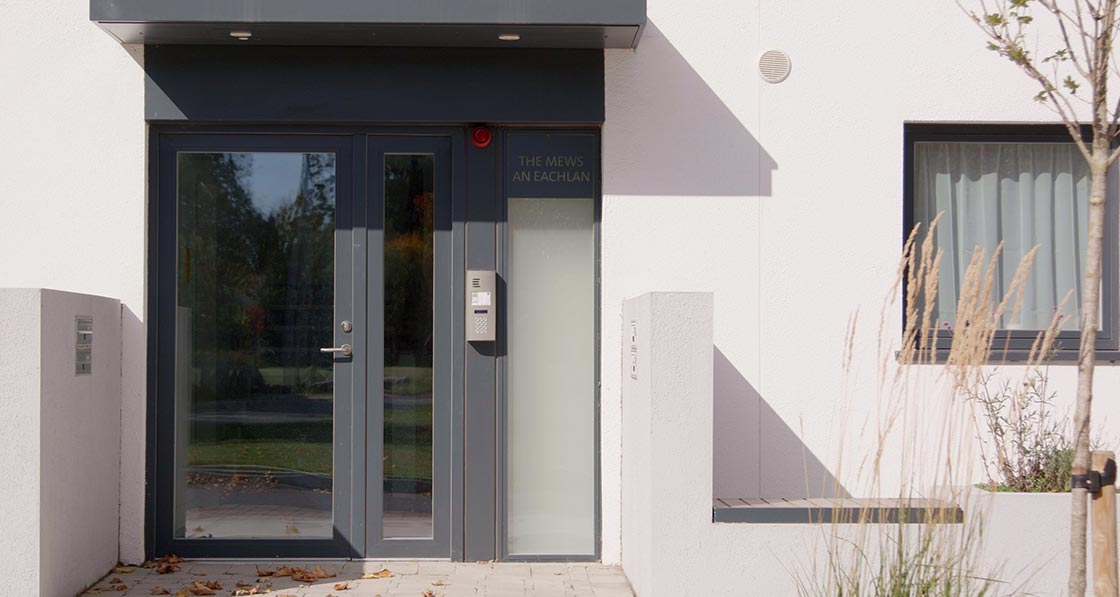 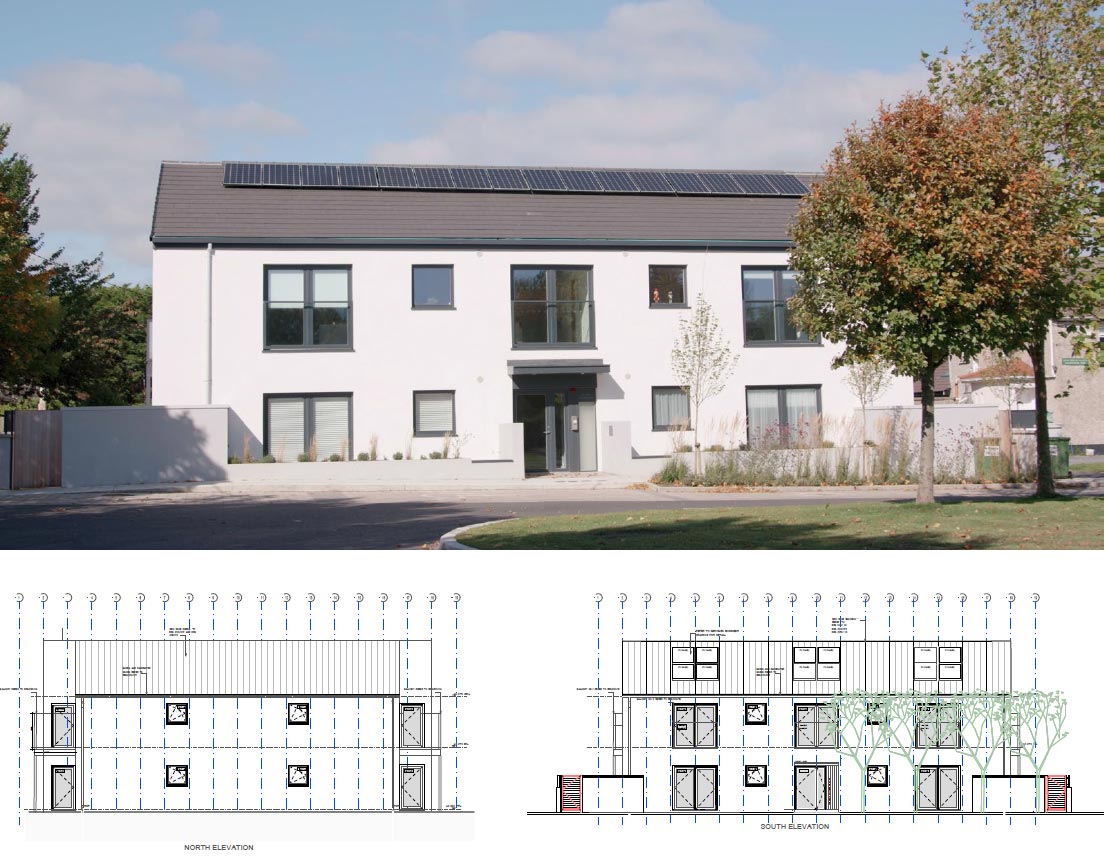