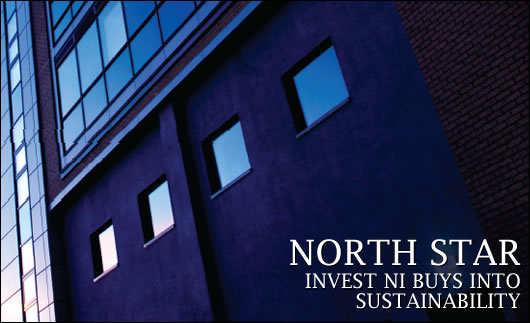 News about the North of Ireland in the last decade has, unsurprisingly, tended to focus on the on-again, off-again, on-again nature of the peace process. Of course, the difficult end to over thirty years of violence is undoubtedly the most important story on the news agenda but the focus on politics alone does tend to obscure another side of the story: economics.

While the North is far from being an economic powerhouse it is seeing a renaissance after what amounted to three decades of recession. Central to the effort to at first kick-start and now invigorate the economy is the quasi-autonomous non-governmental organisation Invest Northern Ireland. As part of its commitment to supporting economic development, Invest NI has itself invested in a new headquarters in central Belfast that it hopes will be seen as a model for sustainable development, as Richard Linger, Sustainability Director, White Young Green Ireland explains.

The Invest NI HQ in Bedford Street is one of the most unique office buildings in Ireland. Not only was the construction of the £25 million (approximately e37 million) building considered to have been amongst the fastest and most efficient accommodation procurement projects delivered through public-private partnerships (PPP), but end-of-life sustainability has been incorporated from the inception, with the entire building designed to be totally deconstructed and recycled for future use.

This latter feature was just one of many that were introduced by the building’s development team to ensure that it was one of the most environmentally friendly in Ireland. Other measures included Ireland’s first water-mist sprinkler installation, close control environmental heating and cooling; solar domestic hot water pre-heat, full lighting-control installations, low energy powered ceiling void recuperators and rainwater harvesting, all of which were designed to reduce heating and utility costs and ensure low carbon emissions.

The offices represent a significant step in the development of environmentally friendly buildings in Ireland. The market for low energy environmentally friendly buildings is now here to stay and this building is a major step in the right direction as all new public buildings in the North now have to have the BREEAM excellent rating or equivalent. In taking this project forward, Invest NI, with this building, sought to provide the industry with the relevant hands-on experience to develop further buildings in this manner. The ultimate goal of the project's consulting engineers, White Young Green, was to reduce energy requirements and eliminate environmentally damaging materials and also to help their client reduce its energy needs, environmental impact, and thereby reduce operating costs.

Indeed, White Young Green’s network of sustainability experts have worked extensively across Ireland, but with particular emphasis in Northern Ireland, where the public sector insists on a very high rating for its buildings.

For the Invest NI headquarters project, which was built on a brownfield site in Bedford Street in the heart of Belfast’s financial and commercial district, White Young Green was appointed to provide the technical advisor role to the developer MRDE (a joint venture between McAleer & Rushe and Dunloe Ewart), providing employer’s agent, quantity surveying and planning supervisor services. WYG also provided full mechanical and electrical engineering design duties, including low carbon design in conjunction with the Carbon Trust.

Officially opened in December 2005, 18 months after work commenced, the development is now home to over 580 staff.  The 140,000 sq. ft. (13,000 sq. metre) building with purpose built office space was constructed as part of a major PPP agreement and was delivered both on time and on budget.

The scheme was designed by Todd Architects and was fully fitted out and ready for occupation by Invest NI in October 2005. According to project director Peter Minnis, who assisted in the design of the scheme: “The Invest NI headquarters is a new landmark building in the city of Belfast that will provide the agency with a modern working environment of the highest quality. Invest NI’s aspirations for a low energy, environmentally friendly design were delivered in close collaboration with White Young Green.”

The building’s design features a double height, glass fronted reception area where movement up to the first and second floors level can be seen. There is also a visual link through to a ground floor coffee bar.

All floors are fully open plan to encourage a collaborative working environment and improved communication. This creates an open dynamic that can really be felt throughout the whole building. 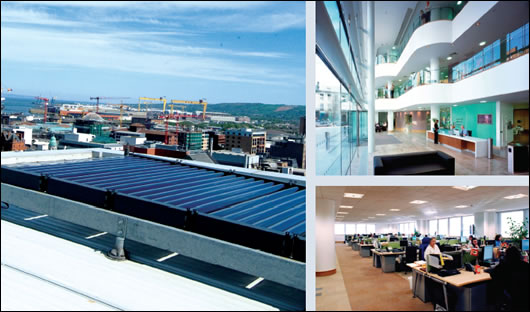 (Clockwise from left) Evacuated tube solar panels on the roof othe building; The double height, glass fronted reception area where movement up to the first and second floors level can be seen; All floors are fully open plan to encourage a collaborative working environment and improved communication; floor voids form a vital part of the building's ventilation strategy

While some developers may be concerned that introducing environmentally friendly elements to the building would slow the construction process, the Invest NI project is considered to have been one of the most efficient PPP construction projects to date. This is demonstrated in part by the speed of construction: the lower basement floor slab was cast in September 2004, the ground floor slab was cast in December 2004; Invest NI started occupation mid-October 2005 and the building was fully operational in early November 2005.

MRDE and the project team ensured this speed of construction and also, because of the nature of the city centre site, they made sure that there was minimum disruption to traffic. Instead of scaffolding, for instance, which would have constricted movement in side streets, mast climbers were used.

As employer’s agent, White Young Green's role consisted of advising the developer on all technical issues pertaining to the submission process through preferred bidder to financial close and liaising with the bank’s representatives in order to secure funding for the development. The role then progressed to monitoring the construction process and reporting to the SPV Board, Invest NI (the Client) and the funder’s due diligence surveyor in order to ensure that cash flow was maintained. White Young Green also successfully managed the delivery process for the building to meet the strict handover requirements of Invest NI.

As well as looking for a flagship building, the end user had also developed an employer’s requirement document which placed the issues of sustainability, waste, material selection, energy use, carbon emission and running costs, high on its list of priorities for the development.

With the scheme being a PPP project, to be procured as a result of a developer competition, finance was also a prime consideration throughout the development of the design of the scheme.

This meant that not only did costs need to be controlled to make the overall submission competitive in terms of cost against its competitors and to satisfy the demands of the public sector comparators, but also in-depth cost in use and life-cycle costings had to be developed. These were necessary in order to ensure that the higher initial costs of the design as being advocated by the design team to incorporate the sustainable design features could be accommodated within the overall life of the PPP and the pay-back period throughout the life of the contract did not make the proposals uneconomic.

White Young Green's role as building services engineers commenced at the conceptual stage of the project whereby the mechanical, electrical, lift and sprinkler systems strategy was evolved in conjunction with Todd Architects. The development features were all practical low carbon design techniques and sustainable engineering was used to deliver low carbon emissions.

This was ideal for an open plan situation and allowed the client to meet its operational needs of collaborative working and promoting working efficiencies.

Personal control: With floor fan tiles mounted approximately one every 10m², the individual’s requirements can be controlled.

Air filtration: The zone units are fitted with G4 panel filters and even higher F7 can be fitted to remove pollen.

Energy efficiency: The system is used for night time cooling to reduce energy costs. As the discharged air is in contact with the building structure itself, which is used as a thermal mass, night cooling of the building gains some cooling effect the following day.

Construction: The flexible office building had some major advantages over a traditional building, as the slab-to-slab height was reduced, saving on building materials and reducing the overall height of the 12 storey development. The nature of the system also allowed the construction period to be reduced as there was no first fix and the actual system became part of the fit-out.

The end result of all this activity is a building that perfectly combines form and function to deliver one of the island’s most environmentally friendly corporate headquarters.

Invest NI's chief executive, Leslie Morrison, said he and his staff are all extremely happy with their new accommodation: “As our home for the next 25 years, this remarkable building will further complement the vital work carried out by our local and international office network, providing a perfect mix of expertise which will strengthen our economy by increasing the competitiveness of Northern Ireland business in global markets and securing inward investment. It will clearly add value to everything we do,” said Morrison.