A new development in Tipperary aimed to combine excellent levels of airtightness and insulation with generous glazing and natural ventilation to deliver ultra-modern, comfortable, low energy offices. How did it work out?

This site in Tipperary Town is home to decentralised offices for the Department of Justice and Equality, and new civic offices for Tipperary County Council. Arranged in two separate buildings east and west of a central civic plaza, the project is underpinned by a sustainable ethos that can be identified at almost every point in the design process.

Bernie O’Brien is caretaker at the civic offices. He says that the staff are delighted with their new quarters. “My last building was an old period building that was converted for offices,” he says, “but it was cold, draughty and hard to heat. It needed a lot of maintenance. This building is state of the art.” 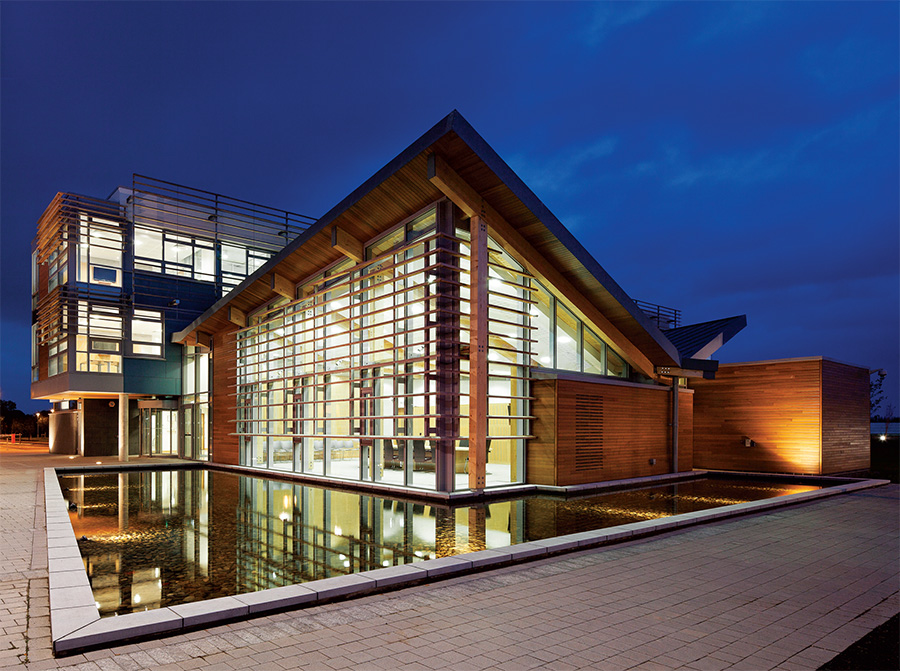 District engineer, Aidan Finn, agrees. “They’re bright, airy offices,” he says, “it’s a really pleasant place to work in.” Finn, who was town engineer during the build, explains that a committee within the local authority co-ordinated with the Office of Public Works (OPW) to develop a full specification ahead of the tendering process.

The contract was won by a building firm, Stewart, a company which has a long-established track record in sustainable building. The Galway firm built the Bucholz/McEvoy designed SAP offices in Ballybrit, Galway, along with the BREEAM Excellent rated decentralised offices in Roscommon in 2010.

MD Paul Stewart says that the design and build model works well with a sustainable agenda. “You don’t get as many design iterations or changes,” he says. “It’s much easier to drive efficiencies because people know where waste can occur, and they all work together. There’s no incentive to do that on traditional build projects.”

He points out that since the recession, the tendering process has frequently precipitated a race to the bottom, as contractors sell at or below cost simply to keep going. Because price isn’t the sole criterion on design and build projects, there is much greater scope to deliver an optimal solution. It also gives the lifetime costs of the building a priority that can be lost on traditional builds.

Stewart retained Coady Partnership Architects for the project. The two companies had worked together on a number of other buildings, including the aforementioned decentralised offices in Roscommon.

Tomas Sexton, project architect for Coady, explains that the design team employed a collaborative approach. Contractor, architect, structural, civil and M&E engineers, landscape architects and others all came together in a round table format to tease out the various issues. 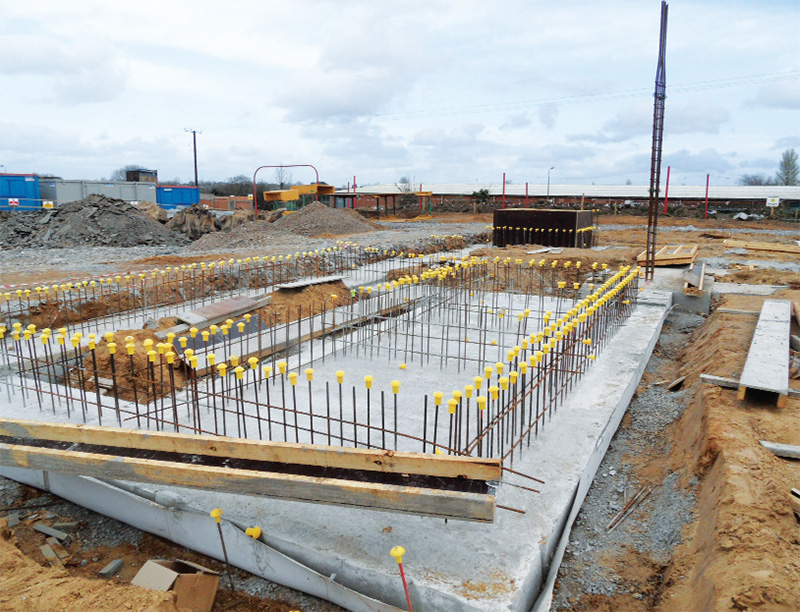 “We worked all our strategies out early on,” says Sexton. “Buildability solutions, structural solutions, we talked with M&E about ventilation strategies, we discussed building width, grid depth, steel versus concrete, precast versus insitu, grid structure, the depth of the plan for light penetration and so on.”

The Stewart-Coady partnership had used a poured-on-site concrete slab with columns on the Roscommon project. In Tipperary, they had intended using the same approach, but then realised that by using precast concrete sourced locally, onsite wastage would be cut. “So even at that stage we were looking at supply chain,” says Sexton. “We wanted to show the OPW that we could improve on the green credentials of the project, even at that specification level.”

The design team sought to preserve as many of the site’s natural features as possible. Work exclusion zones were instigated around trees, while archaeology discovered during excavations was preserved and documented. The civil engineers used a natural dip in the terrain to facilitate a drainage solution and avoid the need for attenuation tanks. Swales were created to collect run-off water from car parks, which meant that petrol interceptors were largely unnecessary.

“These kinds of approaches,” says Sexton, “allowed the contractor to keep his price down, and at the same time, it demonstrated to the OPW that we were taking a better environmental approach to developing the site.”

Paul Stewart says that making a building both aesthetically pleasing and environmentally sound can sometimes be difficult. Extensive glazing is a frequent requirement, both to provide the right look and to deliver daylight into office spaces. “But that isn’t necessarily the most environmentally friendly to design or build,” he says.

In large office buildings, the cooling load is typically heavier than the heating load, which is why conventional developments invariably require large air conditioning systems. In Tipperary, both buildings are naturally ventilated. The natural ventilation strategy not alone reduced the M&E bills for the project, it also makes both buildings much cheaper to cool. 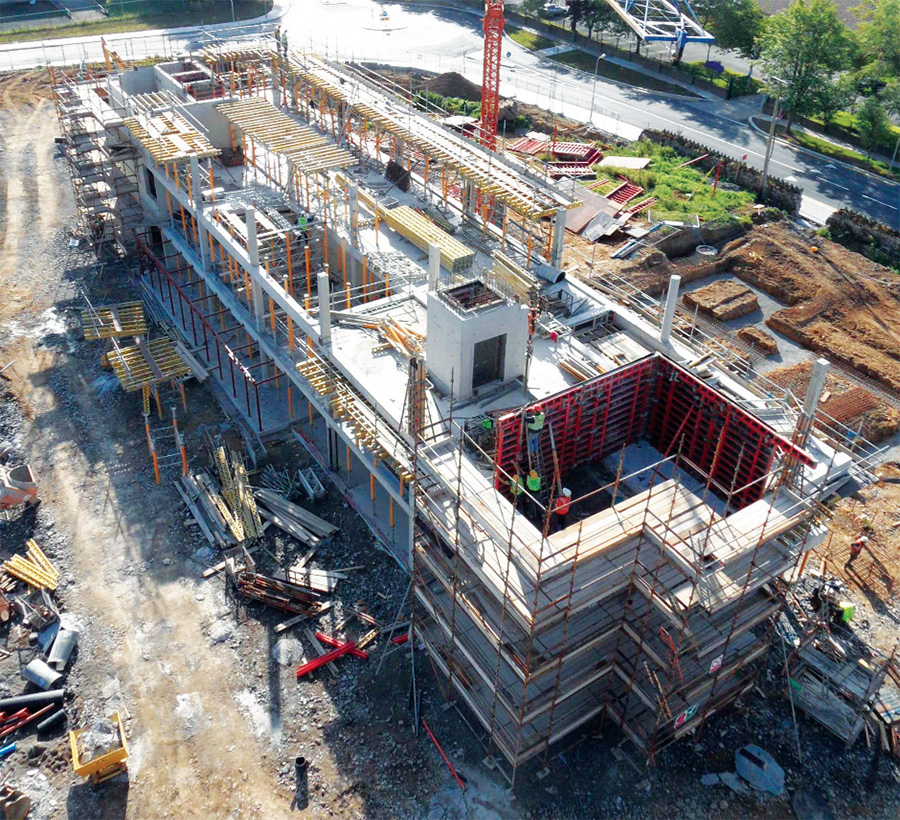 Construction proceeds at the site

This system is facilitated by windows at high and low level. The top hung sashes are controlled by the building management system (BMS) linked to temperature and CO2 sensors. These facilitate automated indoor environmental control, night purging and summer cooling. There’s also sufficient flexibility for staff to override the system and open or close windows as they require. It was deemed that only meeting and conference rooms, because of their higher occupancy levels, required mechanical ventilation.

District engineer Aidan Finn says that over the summer months, the Tipperary County Council building maintained an even, comfortable temperature even on the hottest days. “You can manipulate the temperature in each individual room. Some people are colder than others, some people are warmer than others. It’s about playing around with that, making sure that you get everything just so.”

But he says that the brise soleil fitted to the southern elevation to deal with glare didn’t do that job quite as well as had been hoped. Indoor temperatures in the Department of Justice building also rose a bit above comfortable temperatures during the summer heatwave in 2013.

Flexibility was also an integral element of the design. The natural ventilation strategy had to address, not alone the current layout, but also the possibility of future layout changes. Tomas Sexton again: “The brief required office spaces to be fully adaptable from cellular to individual and vice versa, so we needed a ventilation strategy that would work for both.” Again, in order to provide for future design changes, open spaces were designed with raised floors to facilitate distribution of services. 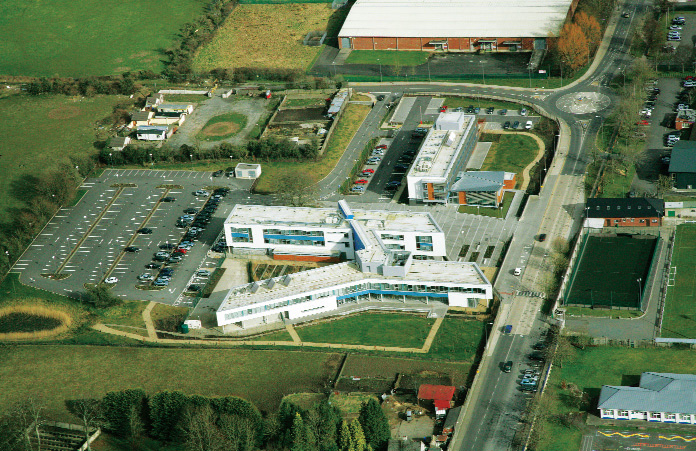 An aerial view of the site, with the Department of Justice building in the foreground

The use of precast concrete, in addition to delivering a greener supply chain, also allowed the buildings to benefit from thermal mass. “It gave a very high quality finish internally,” Sexton adds, “and good reflectance.” Because the buildings are naturally ventilated, there was no need for suspended ceilings to contain the ductwork (although many passive houses with stainless steel ductwork shun suspended ceilings, instead expressing the ductwork as part of the architecture). Instead the fair-faced, precast concrete was given an aesthetic finish and left exposed.

Single leaf block fitted with external insulation was deployed throughout the project. “It’s easier, quicker and more cost-effective to build,” says Sexton. “And by having a good rational structure, you have a better chance of keeping a very high standard. Often if things are overly complex, and very dependent on trades, your quality can drop and the eventual performance of the building can drop.”

The external insulation system chosen was Soltherm HD Weather from Solix. “It’s specially designed for British and Irish weather,” says Waldemar Malec of Soltherm. He explains that the key advantage of the mineral texture coat applied to the insulation system is that it dries by chemical reaction rather than by evaporation, which means that it can be applied during cold and wet months. “The texture coat is wash-off resistant in two hours,” he says. “Because of that advantage, we were able to start in December, and deliver the job three months before schedule.”

Simplicity and rationality were also central to the decision to rely on wet plastered blockwork internally to deliver airtightness. This was supplemented by tapes and seals at key junctions. The Department of Justice building achieved an airtightness result of 1.73(m3/hr)/m2 at 50Pa. While large buildings sometimes hit what seem like comparatively low airtightness results, thanks to their often low surface area to volume ratio, this still seems a strong showing for a building with a natural ventilation strategy demanding over 500 opening sashes, while the Tipperary County Council building achieved 2.64 m3/hr/m2.

“The design team and the contractor realised from an early stage that designing and constructing an integrated building envelope was one of the key contributors of having an energy efficient building,” says Brian Shannon of BE Technologies, who advised on the thermal envelope. 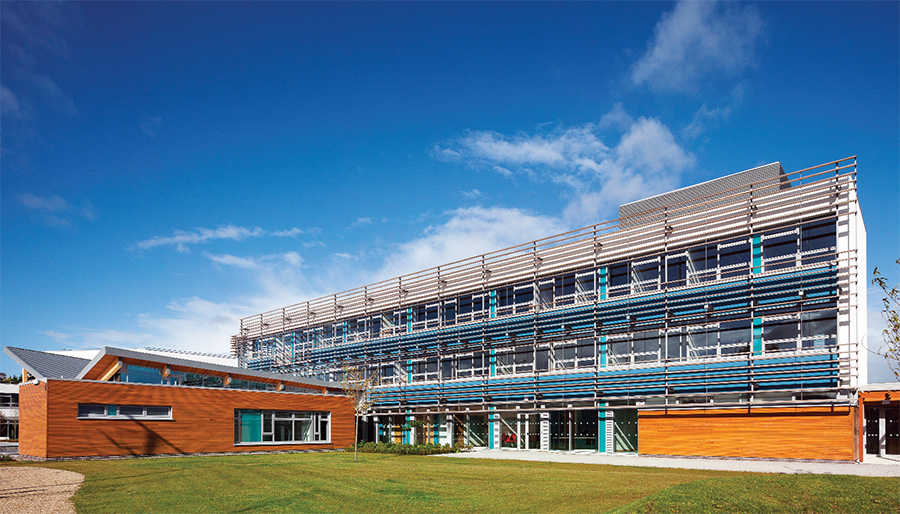 The heating solution incorporates a range of Jaga trench and low-water content wall-mounted radiators located throughout both buildings. Andrew Treacy of Versatile, who supplied the units, explains that low-water content radiators deliver heat far more efficiently than conventional radiators by achieving target temperature more quickly. The system is exceptionally responsive. “The system shuts down so quickly in response to free heat sources like solar gain and occupancy,” he says, “that you’re always staying closer to your heat set point; so you don’t have these peaks and troughs.”

The roof of Tipperary civic offices has also just been fitted with 45kW of solar PV panels as part of the largest project of this nature in the country. Organised by Tipperary Energy Agency (TEA), fully nine public buildings throughout the county have been kitted out with solar PV arrays totalling 800 panels. TEA estimates that the array on the roof of the civic offices will supply 10% of the building’s electricity requirements. 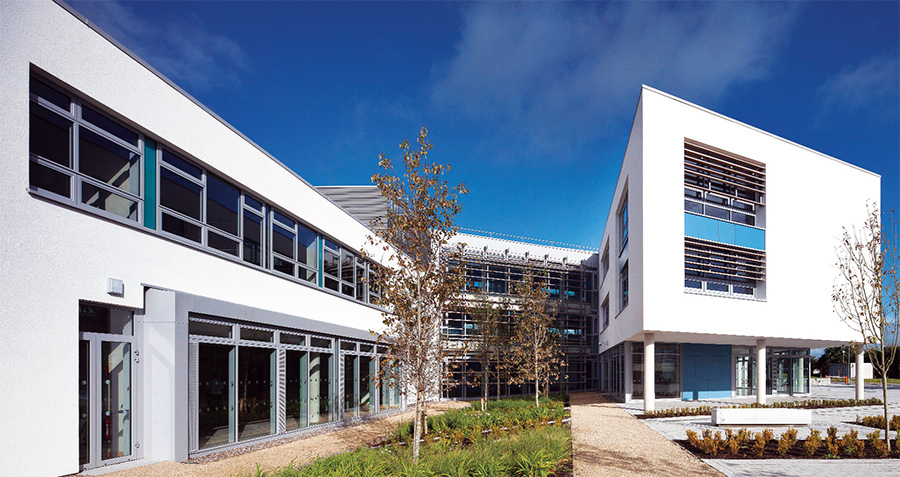 The Department of Justice building has been designed to achieve ‘Gold’ standard certification under LEED, the US Green Building Council’s certification program which takes into account a building’s energy use, location and transport, materials and resources, water efficiency and indoor environmental quality. The overall project has also been commended for sustainability by the RIAI, Irish Concrete Society and the Fit Out Awards. 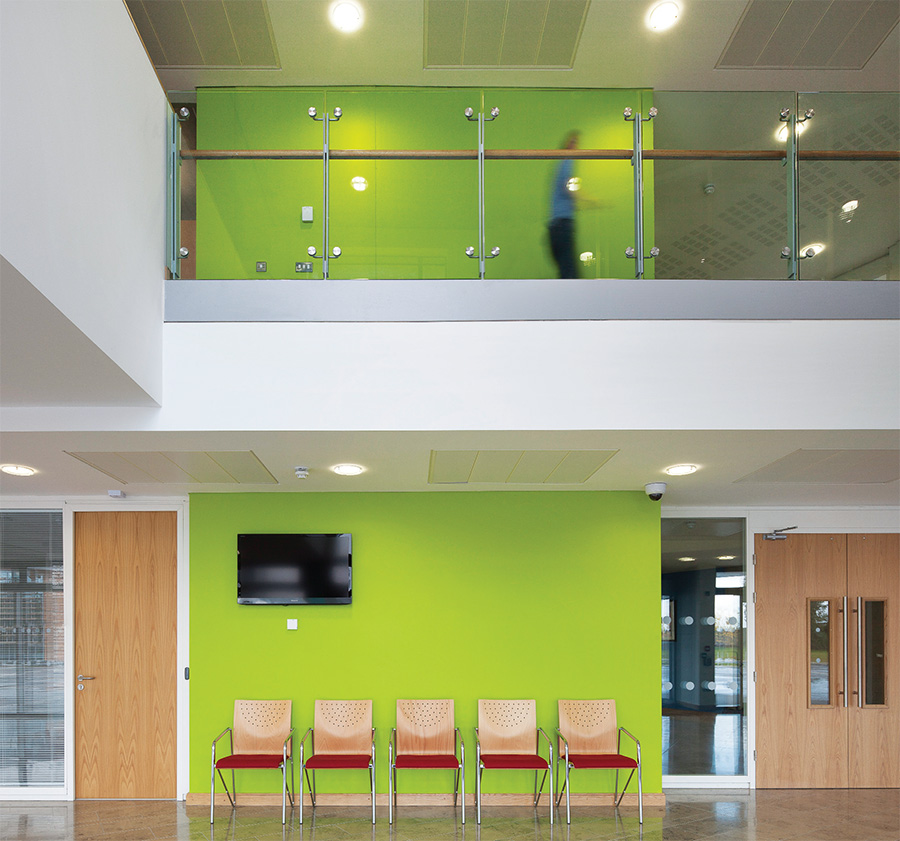 Environmental certification: The Department of Justice building will be submitted for LEED ‘Gold’ certification.

'Tipperary Energy Agency has been successfully supporting Tipperary to reduce its energy demand for 20 years.

'Tipperary Energy Agency has been successfully supporting Tipperary to reduce its energy demand for 20 years.