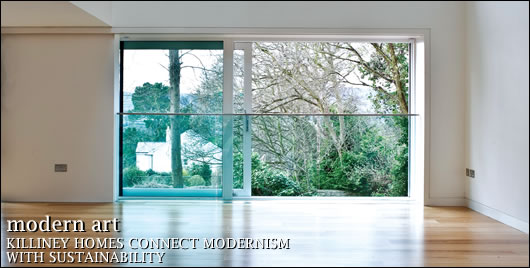 Killiney is an area known for both its natural beauty and the desirability of the existing built environment. Jason Walsh visited two new houses in the exclusive south County Dublin village which show it as being at the forefront of the drive to create a lasting beauty.

For many residents of Dublin living in the Killiney area is something of a dream. For one family, this dream has become reality with the construction of two impressive houses, one a family home, the other currently on the market.

Located off Church Road in Killiney, County Dublin, the houses are 3,450 square feet (320 square metres) and 2,850 square feet (265 square metres) respectively. Anyone who knows the area will be well aware of the fact that it is dominated by its hilly nature. The two houses are aligned along a retaining wall that divides the steeply sloping site into an upper court and a lower garden.

Designed by John Parker of ABK Architects in Dublin, the houses received a “highly commended” award at the recent RIAI 2008 Irish Architecture Awards. The houses are both breathtaking and sustainable. Truly modern in every conceivable way, with the Killiney houses one can see design modernism meeting modern reality – architectural design and sound engineering have been brought together to make memorable, comfortable houses that make few sacrifices on the road to energy conservation.

Both architect Parker and mechanical & electrical consultant Brian Homan of Homan O’Brien Associates have a history in sustainable building: " Brian and myself have worked on a number of projects, including the Offaly County Council building which won the award for being the best sustainable building in 2002," said Parker.

More recently, Parker and Homan also worked together on Cork City Civic Offices, a building that has just won the sustainable building award in the RIAI 2008 Irish Architecture awards. It's hardly a surprise then, that these houses were designed to minimise their impact on the environment: "Sustainability was coming from all sides on this project," said Parker.

Work began in December 2006 with the demolition of the existing house on the site: "It was a traditional 1970’s house, quite worn out," said Brian Homan. Design of the two new dwellings began in April 2006, with construction starting in January 2007 on the ¾ acre site. 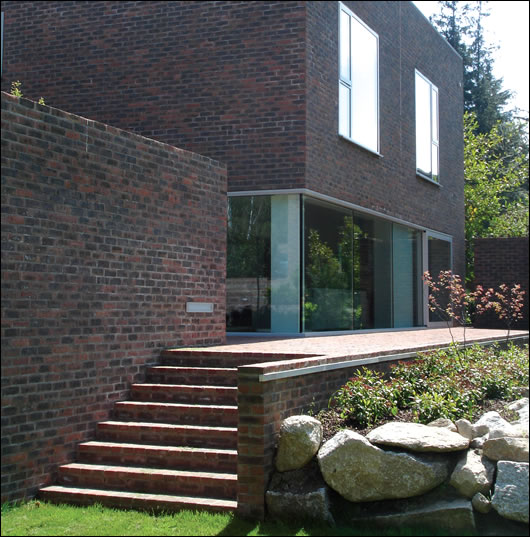 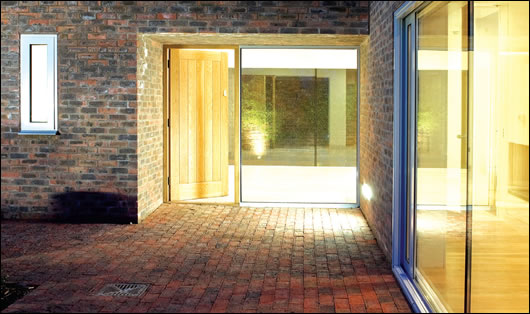 The houses were assessed using the DEAP software and achieved a calculated A3-rating – however because the planning application for the houses was lodged prior to the mandatory introduction of BER for new homes, it was not possible to have them officially rated – something of an anomaly in the BER system. According to Sustainable Energy Ireland, a voluntary BER can be awarded to the unoccupied house before it is sold, but the client’s own house cannot be given an official BER certificate given that it is already occupied.

Going green
With sustainability moving ever higher up the agenda many builders are looking  away from traditional blockwork housing toward manufactured houses, particularly timber frame. This is one area where this project does not gain green points, as the houses use concrete floor slab, roof slab and solid concrete walls, due in part to the client’s view that it would add solidity. The heavy structure is apparently also of benefit in giving the houses a large thermal mass. “With a concrete slab [floor] you can build-up a thermal mass with the underfloor heating and geothermal," said Homan.

Despite the traditional materials, in particular the brick outer leaf, the houses have a striking design. Shades of modernist heroes Ludwig Mies van der Rohe and Le Corbusier can be seen in the strong but simple form of the dwellings, but they also lack the dogmatism that is often associated with high modernism.

"The office has a tradition of modernism going back 40 years," said Parker. "It's a rich and complex tradition – we don't do it in a pedantic way, we have a relaxed, catholic approach to modernism."


Energetic performance
Of course, an essential element of any purportedly sustainable building is energy, both generation and preservation. The renewable energy component comes in the form of Thermomax solar thermal collectors and a Nibe geothermal heating system, both supplied by Unipipe in Bray. 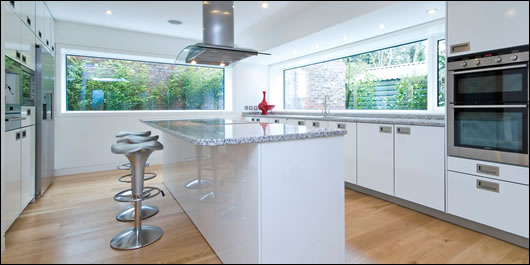 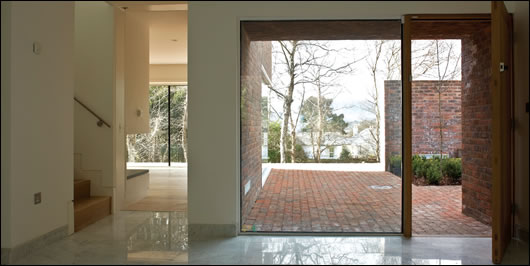 Low-energy lighting is used throughout the buildings, including in circulation spaces, although extensive glazing reduces the need for artificial lighting

"There are two boreholes for each house," said Homan, "each is 120 metres deep”. A special rig was used because of the site’s hilly nature. Heat from the boreholes is then used for the underfloor heating system and to heat the hot water when the solar panels are not active. "Underfloor heating is ideally suited to geothermal," Homan said.

"The temperatures from the ground have typically been eight degrees coming up from ground and six degrees going back. When you get the source and heat out temperatures close together you get a greater COP [Coefficient of performance]. With heating water out temperature of 35 degrees, the COP is 5.7.

Lighting throughout is by mini fluorescent spotlights and LED spotlights consuming only 11 and 9 watts respectively.

Beyond the on-site generation, there is also the pressing issue of lowering energy requirements and conserving the energy in the building, something Homan and Parker have not shied away from addressing.

"Sustainable architecture is good architecture from our point of view," said Parker. "It's one of our main interests but we temper it with other design concerns."

The walls were insulated with 60 millimetre Kingspan Thermawall TW50 insulation board, with all joints taped. The wall construction gave a U-value of 0.23 W/m2K.

Project architect Criona Nangle told Construct Ireland that other insulation methods and materials were considered including full-fill materials: "[...] We were initially very interested in using [full-fill insulation], but the problem was using it with brick in severe exposure conditions. Given that the site is on the side of a hill near the coast we considered it an unsuitable option," she said.

John Parker expanded on this point: "We had wanted to use a full-fill cavity insulation for a number of reasons, primarily one of on-site workmanship but when we looked at it the full-fill insulation performance wasn't quite good enough.

Making full use of the site's mature woodland was an important aspect of the design brief. Large windows on this rear elevation overlook the garden and wooded area out to the Wicklow mountains

"We were also concerned about water infiltration so we retreated to a partial fill insulation", he said.

Nevertheless, an innovative approach to  the building resulted in better workmanship on-site and, ultimately, better performance: "Instead of shoving the insulation in blind into existing walls we decided to approach the problem differently.

"We brought the internal leaf up first, then added the insulation, taped it heavily and brought the [external] blockwork up afterwards," Parker explained, noting that by taking this approach the insulation was not broken at any point. "The traditional method is done for reasons of labour efficiency. I don't think people have been cognitive of the fact that holes and gaps are a problem.
"There are lots of obvious things like that in the construction industry," he said.

The roof insulation is 140 millimetres of Kingspan Styrozone.

Glazing was, as always, a central area for eliminating heat loss. Both houses are extensively glazed so it was essential to achieve as good a U-value as possible.
All glazing units were supplied and fitted by K&K Windows Ltd. in Gorey, County Wexford. All windows are Reynaers TS57 units, patios units are Reynaers CP155 and doors are Reynaers TS57. The glazing, supplied by CareyGlass, is Vistatherm Elite with a U-value of 1.1W/m2K. K & K Windows offer Vistatherm Elite in all their products.

"The HRV in both houses extracts air from the bathrooms and supplies it into   the living areas," said Homan. “There are no vents in these well sealed houses.
"It's an efficiency issue in the winter. In summer it is timed to operate during times of bathroom usages as most of the windows are notched open” he said.

(Above and Below) Renewable energy sources meet the buildings’ space- and water-heating needs, combining solar thermal and a geothermal heat pump 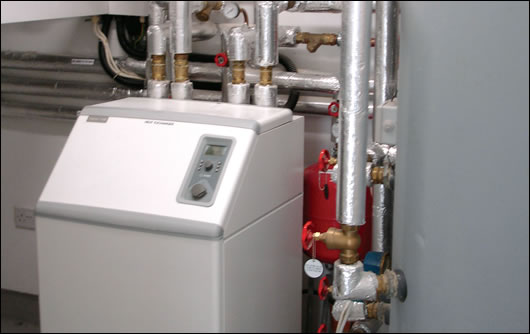 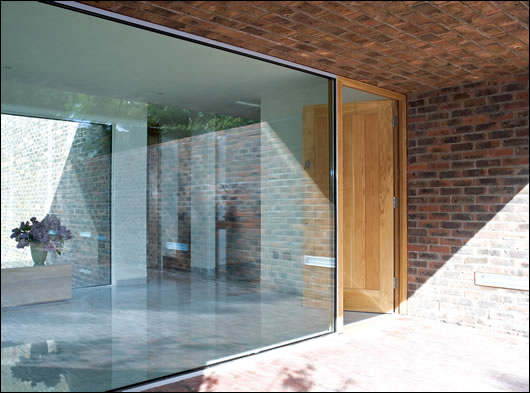 Blower door tests are set to enter every builder’s vocabulary due to their mandatory role under the new Part L which came into effect on 1 July. However when the planning application went in for these buildings in 2005 there was no such requirement and a blower-door test was not performed. Homan and Parker are nonetheless adamant that the buildings are air-tight. During the design and building processes special attention was paid to ensuring minimisation of cold bridging and leakages.

"One of the most common areas for losing air-tightness would be fenestration so   that was important for us. [For example] All of the window frames have bonded EPDMs [ethylene propylene diene monomer rubber] sealed back to the building," Parker told Construct Ireland.

"It's not necessarily apparent in the structure but it's learnt from our work on larger buildings. We did a wet plaster interior rather than dry-lining – dry-lining can result in micro cavities."

Overall, Parker is satisfied with the result: "They would be quite air-tight buildings," he said.

In addition, despite the spaciousness of the houses, both were actually designed with lowering energy requirements in mind: "They're actually quite compact in terms of their footprint," said Parker. "They don't have extensive external walls."

Having dense footprints result in lower energy loss but also brings a minimalist aesthetic into play: "I like the fact that they're not flamboyant," said Parker. "There's an economy in how they're designed."


Nature reserved
For Homan and Parker, though, sustainability doesn't begin and end with energy. When planning the houses, particular attention was paid to site issues.
"We placed the houses to keep as many of the [existing mature] trees as possible and do as little excavation as possible. All of those kinds of things use energy," said Parker.

He also notes that orientation is vital: "They're oriented to get passive solar energy [and] they're made out of concrete to give thermal mass."

Parker admits that concrete doesn't have the strongest green credentials but that it can be used in innovative and sensitive ways: "There is a sustainability issue with concrete," he said, "but it was an important build for the client and he wanted a solid house. We had looked at lighter structures but a masonry structure seemed appropriate."

Interestingly, the focus on site orientation has had a significant effect.

The houses' front elevation look south-west towards the Wicklow mountains as opposed to overlooking the sea.

"I don't think there's a single main elevation," says Parker. "The project was designed around the existing woodland and the courtyard."

Parker explains that this follows from attempting to make the natural landscape a central focus.

"There was a house near Collimore harbour [between Dalkey and Killiney] that I remember seeing. Someone opened their front door and there was a view straight out to the sea and to Dalkey Island beyond. In the larger house the view toward the Wicklow mountains is designed similarly. There is always that kind of dialogue between the landscape and the space."

Together Homan and Parker have created two sustainable houses that don't make any sacrifices in aesthetics, a remarkable achievement.