A unique new home in the Forest of Dean, designed by Loyn & Co Architects and nominated for this year’s RIBA Stirling Prize, features the second largest expanse of Internorm’s HS330 large scale glazing system used to date in Europe.

Outhouse is a purpose designed, site specific home for two artists, constructed as a replacement dwelling in a remote location within the Forest of Dean, and with a major emphasis on sustainability and low energy consumption.

Airtightness was one of the biggest challenges on the project, given the complex building form, the variety of wall assemblages and the large expanses of glass. Nonetheless the project achieved a blower door test result of 0.49 air changes per hour for the building envelope, which includes 80 linear metres of the HS330 Internorm timber-aluminium large scale triple-glazing system, including glass corners and in-line glass joins, and has a whole-window U-value of 0.7 W/m2K.

The system was supplied and installed by Internorm’s No1 UK partner, Gloucestershire based Ecohaus Internorm, who also provided the same system for the Caring Wood House in Kent, which has the largest expanse of HS330 in Europe to date, and was designed by Macdonald Wood Architects. 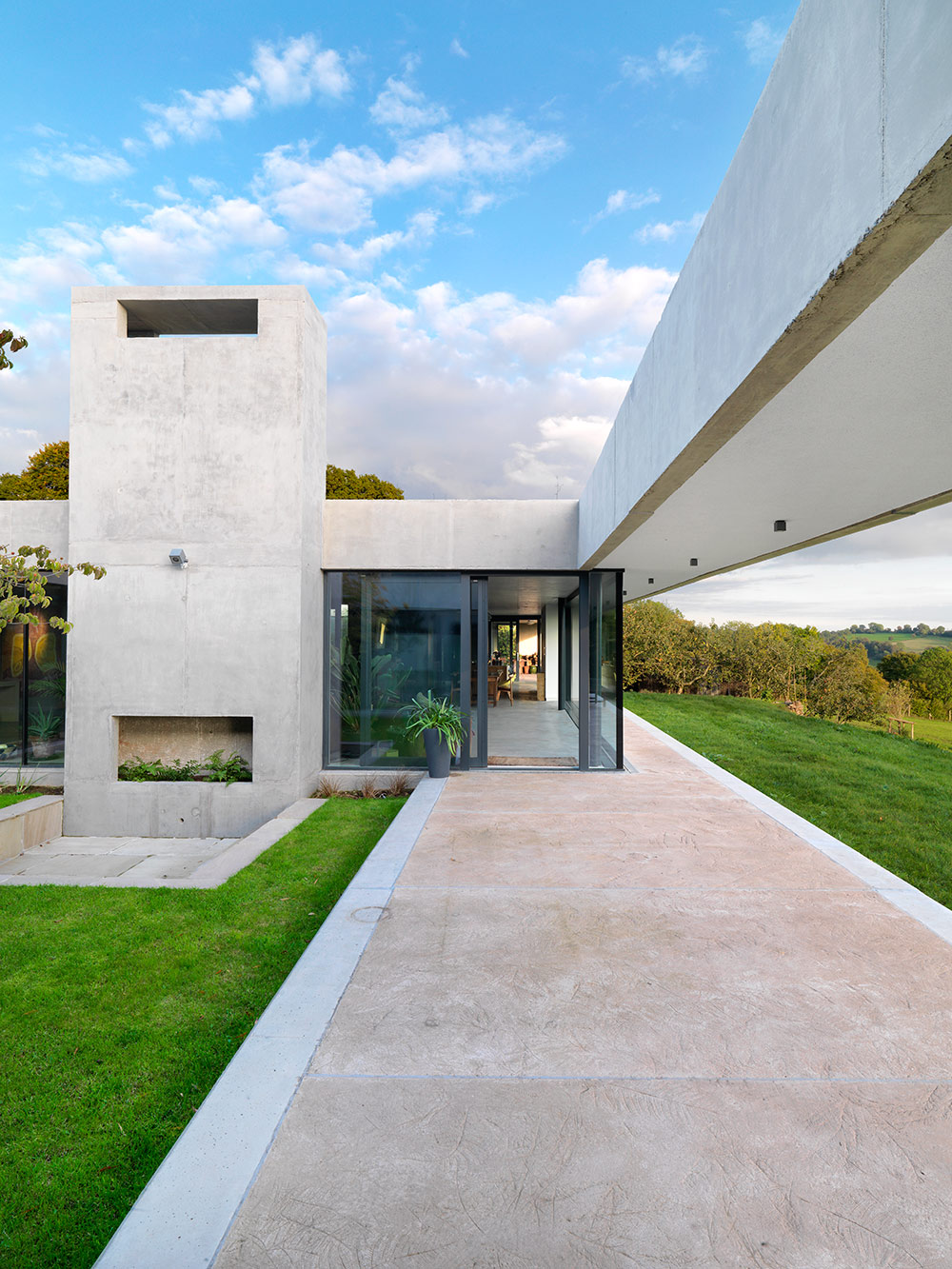 The brief for Outhouse took into account the clients’ passion for the landscape and environment, along with their requirement for two artist’s studios and a gallery-like space to display their art collection.The response to the brief, and breathtaking site, was to create a single-storey dwelling that is embedded into the hillside.

The layout of the house is organised around a series of external courtyards which trace the footprints of the three buildings formerly on the site, which have been conserved and converted in the new dwelling. The roof is created by continuing the existing upper field along and over the building to create a highly insulated, intensive green roof.

The low lying dwelling is hidden from view from the north, concealed within the existing topography. While the footprint of the 490 square metre dwelling is significantly increased, its visual impact is considerably reduced. 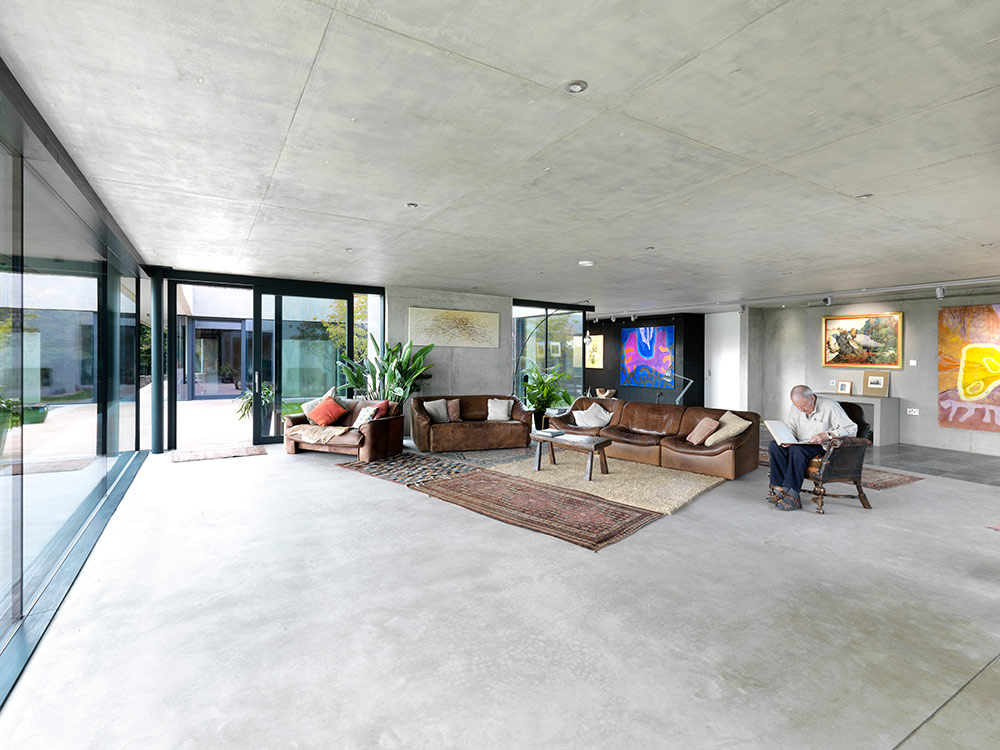 The buried retaining walls are exposed cast insitu concrete with a high percentage of GGBS (a low carbon alternative to conventional cement). Elsewhere steel and highly insulated timber panels form the external walls, along with the 2.5 metre tall Internorm glazing.

The dwelling has an EPC of 96/100 and includes whole house ventilation, a ground source heat pump, solar thermal and photovoltaic panels. U-values for most of the opaque building elements are around 0.09 W/ m2K.

Outhouse was nominated for the RIBA Stirling Prize, and won the people’s vote for the award, despite not winning the overall prize. The project also won the Sunday Times British Homes Award for one-off houses over 5,000 square feet, and the prestigious Manser Medal. 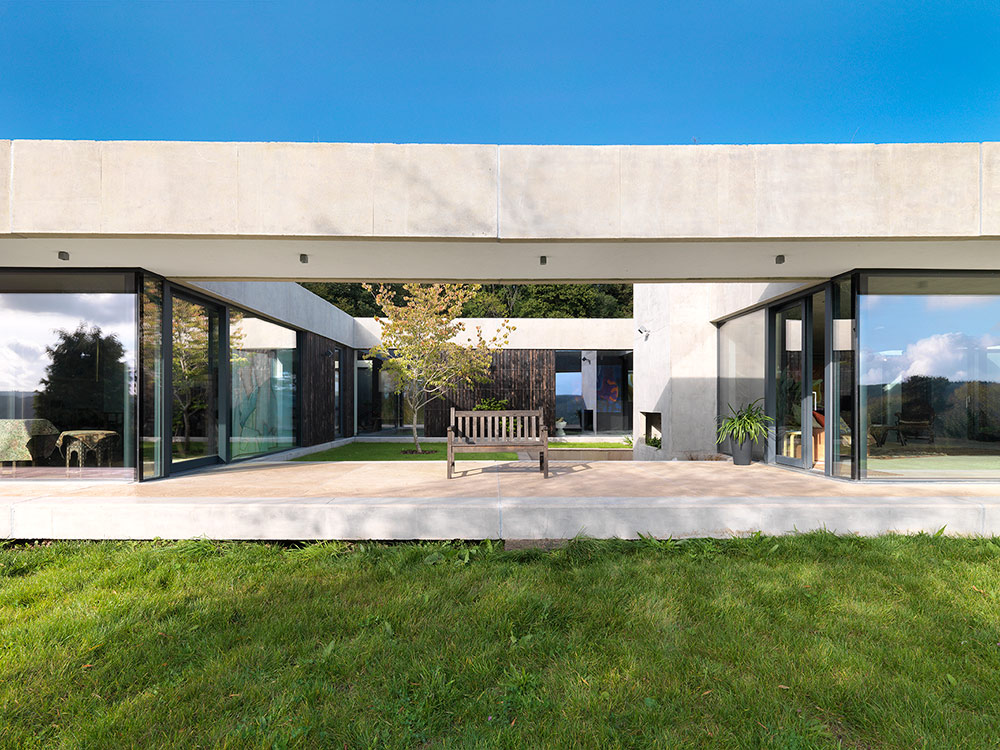