A building doesn’t have to be designed as a cube to meet the passive house standard, but it helps. This as yet uncertified passive house in Carlow shows that, climate permitting, less compact designs can be made passive – by pushing the envelope.

Most passive buildings are compact, south-facing and simply-shaped. Starting from these first principles maximises solar energy gains and reduces heat loss — a big leg up for any project trying to meet the passive house standard.

But this house in County Carlow threw the rulebook in the bin, and instead adopted the aesthetic of a traditional Irish farmstead: a cluster of buildings around a central farmyard — not necessarily the ideal layout for saving energy.

But it proves that achieving the passive house standard needn't mean building a boring box, particularly in the mild climate of south-east Ireland. 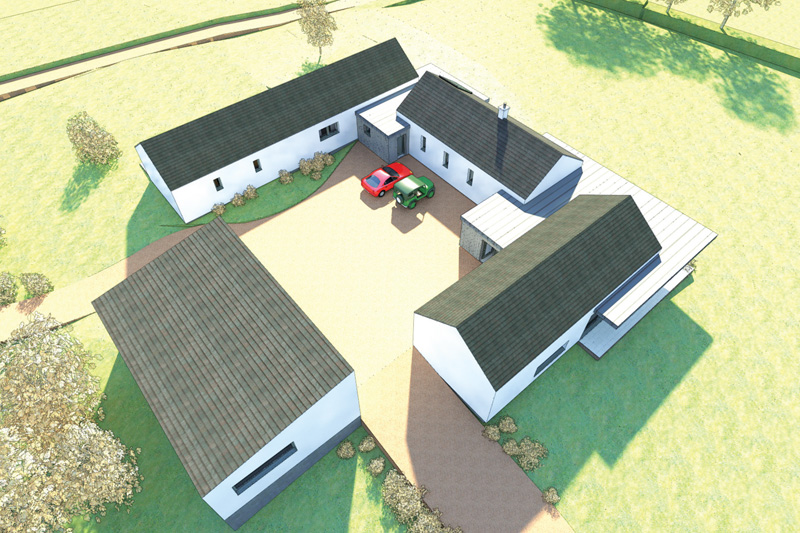 Since the house was finished, it has become one of Ireland's flagship passive house projects — not just for its energy efficiency, but also its thoughtful vernacular design. It was one of the finalists at this year's Isover Ireland Energy Efficiency Awards, and won in the residential section of the Saint-Gobain awards last year.

But homeowner Tony Holden says he didn't build a passive house for environmental reasons — that was just an added bonus.

"The main reason I'm building a passive house is that it's a quality control stick. It's a standard I can test. I've got good metrics to ensure my house is as it's supposed to be," he told us back in 2011. He's been living in the house about 18 months now — so how was it performing?

"I'm very happy with the house," he says. "I'm very relaxed in the house and delighted [the build] is all over."

There was some overheating this summer, but he acknowledges temperatures rose unusually high this year.

Plus, he was keen to have a generous amount of glazing on the south and west facades, and knew overheating could become an issue from the design stage.

"I wouldn't say it's uncomfortable, we've kind of got used to it at this stage," he says. 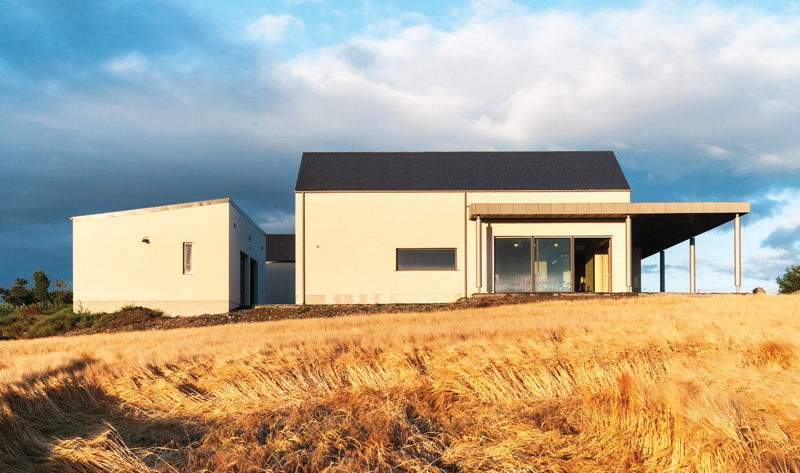 One particular overheating issue occurs on the west-facing wing in summer.

"While we did put a brise soleil to the west it is never very effective, as the sun is setting and is therefore very low on the horizon,"  says project architect Cathal O'Leary of OLS.  He says internal blinds will probably be necessary to help control any overheating here.

But Cathal says he's not generally a fan of using internal blinds to control overheating — it often means closing off views on the sunniest days of the year. Generally, he thinks getting the balance of glazing right, and designing in external shading is the answer.

Heating in the house is distributed by wall-based Variotherm panels — essentially pipes encased in Fermacell board — and Tony wants to work out whether circulating water through the panels at 10-15C can provide adequate cooling."I can't go too cold or I'll have condensation on all the walls," he says. 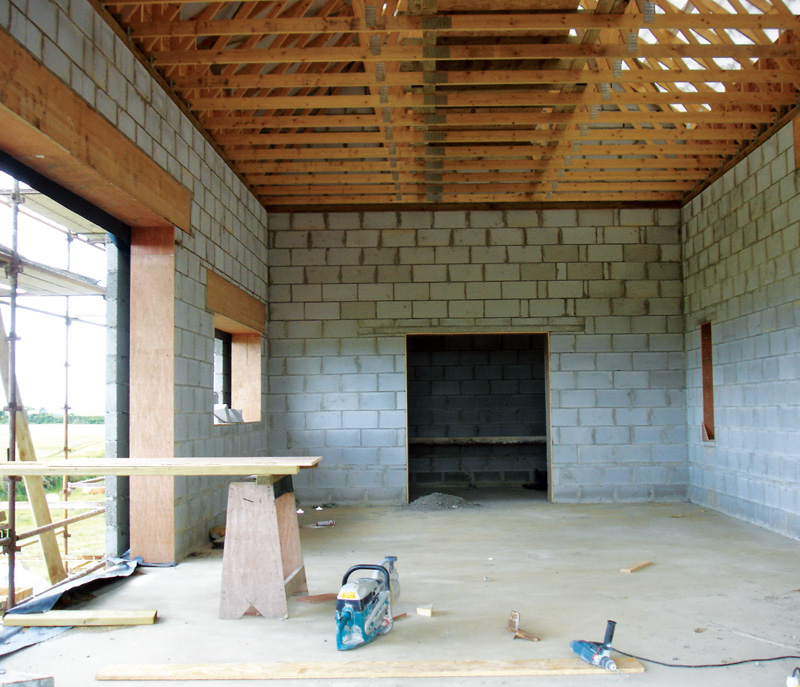 He had originally planned to install a wood pellet stove, solar thermal system, plus heating elements in the heat recovery ventilation. But he says that plan grew too elaborate and expensive, so he scrapped it and put in one ground source heat pump for space and water heating. Damien Mullins of Heat Doc, who designed the system, says in practice at Tony's house the heat pump has a COP of about six for space heating, and seasonal performance factor of around 460.

"If you were to run it in any low energy building like the Holdens’ house, then your seasonal performance factor will be higher because your input temperature from your bore holes is high and your output temperature is low. The SPF for space heating in this case might be 6 or 7," Damien says.

Heat pumps work most efficiently when they’re gradually feeding low temperature heat into a thermal store – typically the floor itself, via underfloor heating pipes. But the Variotherm wall panels aren’t intended to provide a thermal store – instead they offer quick response, even with low temperature heat. Heat Doc’s solution was to install a 400 litre buffer tank so that in addition to the hot water cylinder, the heat pump can operate consistently at optimal efficiency, u topping up a reservoir of hot water so that it’s there when needed.

The house has a room-sealed, airtight solid fuel stove too. 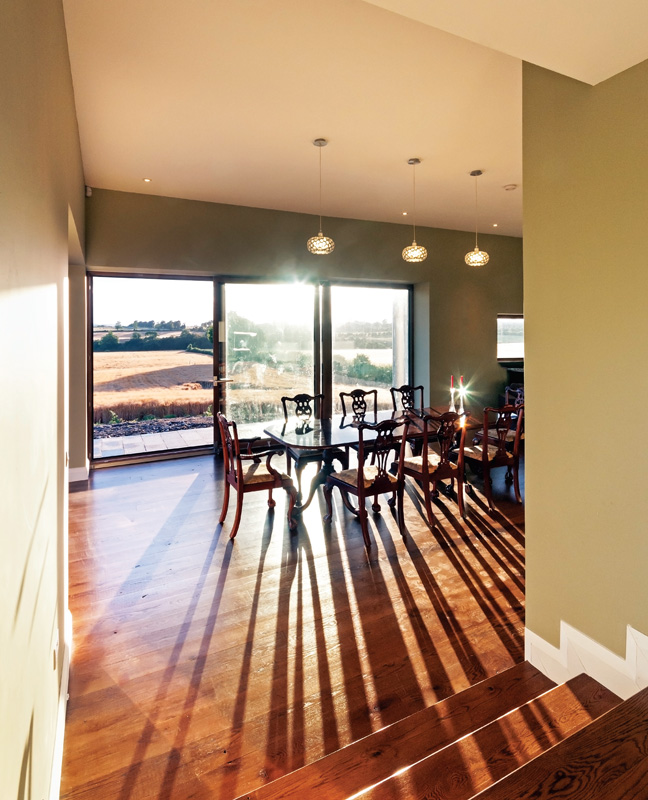 Light shining into the dining area in the west-facing wing of the house. This can be a cause of overheating in the summer as the setting sun is too low in the horizon for the brise soleil to be very effective

"The thing that I really liked about Tony and Siobhán is that when we met them, they said they wanted a house that fitted in the landscape," says architect Cathal O'Leary. "We designed it first and then tried to make it passive after, if we could within the budget."

The house is divided into three 'blocks', centered on a courtyard. The bedroom wing lies to the east to catch the morning sun, the kitchen and living areas face south, while a more formal entertaining room occupies the west wing. The yard is then enclosed by a separate workshop/garage to the north.

Of course this kind of design doesn't usually lend itself to energy efficiency, though architect Cathal O'Leary says the volume to surface area ratio in this case is surprisingly good at 0.79.

But to be sure of hitting the passive house standard, the team had to compensate by designing an ever more efficient thermal envelope.

"We had to exceed the passive standard because we didn't build a compact form house," Tony says. "The airtightness had to be a lot better than the minimum requirement." 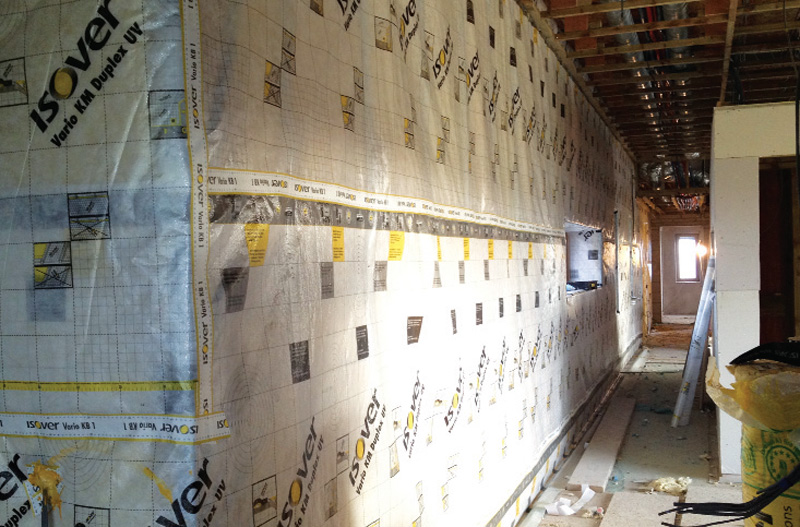 This meant a daunting target of 0.3 air changes per hour (which was achieved), rather than the usual 0.6, and the building’s walls, roofs and floors are heavily insulated even by passive house standards, with all U-values below 0.1.

Before the build Tony went out to tender for cavity wall, single leaf block and timber frame construction, but cavity wall came in cheapest.

The build-up features 100mm Cemex block externally, 150mm Quinn-Lite Aircrete block internally, and a 300mm cavity in between that's filled with Korefill bonded beat insulation. Inside the inner leaf, there's a further 75mm insulated service cavity. u
For airtightness, there's a Gypsum Airtite Quiet parge coat on the inner block leaf, plus a vapour membrane in the service cavity build-up.

Cathal O'Leary says the extra-thick build-up adds to the vernacular feel of the house, evoking the bulky walls and deep reveals of old Irish houses built from random rubble or mud.

Upstairs, the roof is insulated with Climowool KF2 glass fibre, while airtightness here is provided by an Isover Vario vapour barrier. 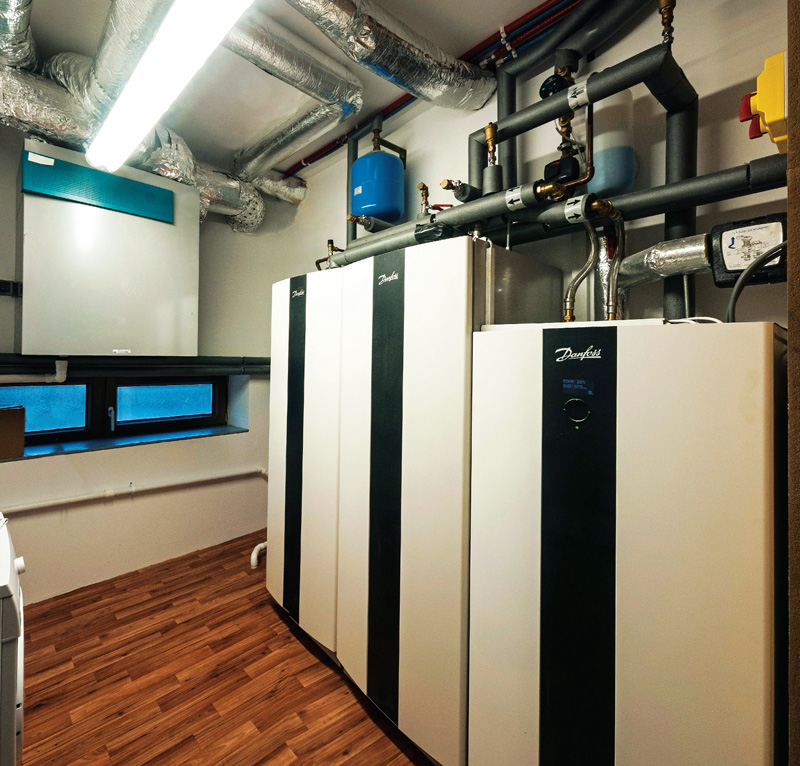 While Tony and his wife Siobhán have been living in the house for nearly 18 months, landscaping work has just begun, and Tony says that because of this, the house doesn't recede into the landscape as much as he'd like just yet. u
"The colours are quite stark at the moment until we get the landscaping done," he says. He also plans to do some planting on the wall of the garage, and the gable ends of the house, to help blend it in further.

OLS have yet to submit the house for passive house certification, but plan to later this year.

Tony reckons that because the less-than-optimum layout required the house to go the extra mile in terms of thermal performance, it wasn't the most economical build.

He's not sure if the extra cost of reaching the passive house standard, considering the design, was justified.

"I'm very happy with the house and a lot of the cost is probably associated with the design rather than the fact that it's passive," he says.

But he says hitting the passive house standard verifies the house is well built.

"It's a real measure of the quality of a build."

Heating: an 8kW Danfoss DHP Opti Pro ground source heat pump with a closed loop collector in a 110 metre vertical bore hole. The tested COP is 4.34/4.88 under different test conditions, but more likely circa 6.0 here due to the low Delta T required in such an efficient house. The heat pump feeds a three hundred litre hot water cylinder.