Not every site lends itself towards passive house, or so the story goes. Intent on making the most of spectacular views to the northwest, Rob Davies and Amy Staniforth’s ecological self-build shows that passive house can overcome orientations that turn their back on the sun.

Artist Rob Davies and his wife Amy Staniforth didn't set out to build a passive house. "We were just aiming for something that would keep us warm and wouldn't cost the earth," Rob says.

The couple started looking for a plot a few years ago, before they got married. Rob was living in Worcestershire, where he'd built his own studio. Amy was working at Aberystwyth University in west Wales.

They looked at sites in both locations, and half-way between, but ultimately decided to settle in Tre-Taliesin, near Aberystwyth. "As long as I've got a studio I can work anywhere basically," Rob says.

They bought a site, and Rob started sketching designs for the house. They both wanted to maximise views facing north west to the sea and hills.

If you keep doing that over and over again, he says, and keep making mistakes, you eventually get it right. 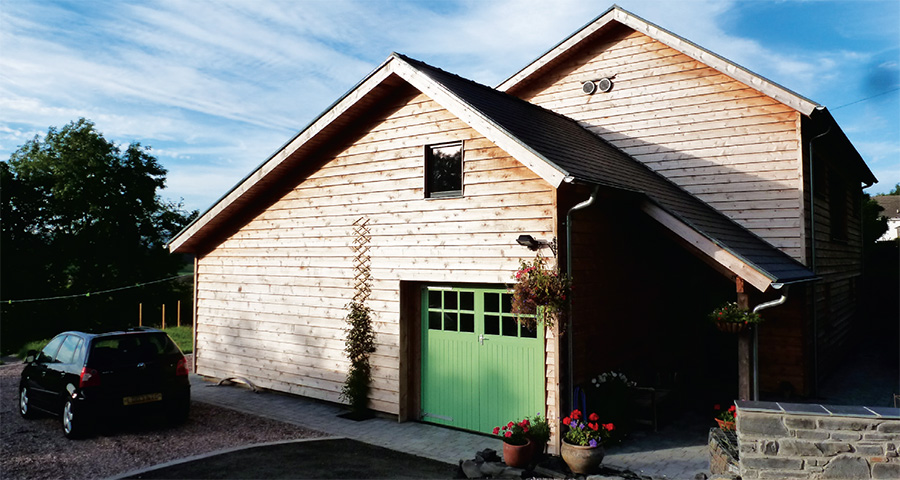 "We were interested in the process, so we went through it ourselves rather than just giving it to an architect. We could have designed a much flashier building, but we just wanted it to work."

One of the early design challenges was posed by the couple's two dogs and two cats. "We had to design the house so they could co-exist but not meet each other."

Rob and Amy had already secured "reserved matters" planning permission when they met local heat pump engineer John Cantor, who recommended they talk with passive house designer Nick Grant. Rob called him, and Nick agreed to come on board as passive house consultant.

Rob decided to act as project manager. "I think in a way that's not such a bad thing if you're spending your own money," he says.

He hired architects Daffyd Tamos to help make his designs a reality, and appointed local firm Tai Dyfi as the contractor. Rob and Amy knew from the start that they wanted a timber house — not just a home built from timber, but clad with it too.

And indeed wood is at the heart of the structure: the walls are timber frame, they're insulated with 350mm of Warmcel, and clad with Welsh red cedar weatherboard. Airtightness is provided by a Pro Clima Solitex DA membrane, supplied by the Green Building Store. 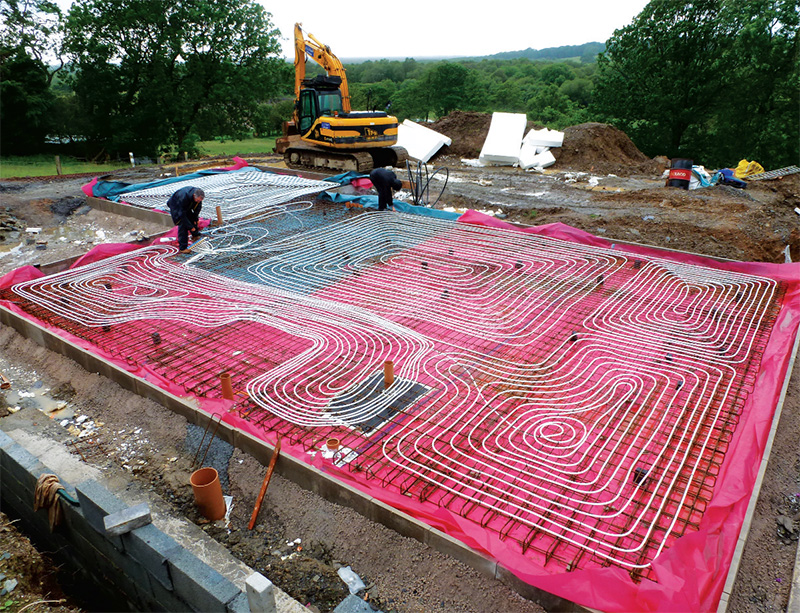 Powys-based company PYC Insulation (formerly Pen y Coed) installed the Warmcel insulation, while their sister company PYC Systems carried out the final airtightness test, which produced a result of 0.365 ACH — an improvement of around 22% on the first test result.

"The second tests were carried out after second fix, but we believe that the main reason for the improved score is the full-fill of Warmcel," says PYC's Rich Hibbert. "We have carried out other tests over the years and have come up with very similar results."

The windows are Optiwin Alu2wood triple-glazed units, which were supplied by the Green Building store and have an overall U-value of 0.77.

But when it came to sealing the building envelope the pets again posed a challenge: how do you make a cat flap airtight?

For Rob, the answer was to make one himself: a simple box with a flap on either end that's surrounded by insulation and taped in place. Rob had seen an airtight cat flap online for $1,000, but his version cost just £25.

"One of the cats, Parsnip, she actually sleeps in it," he says.

Mike Neate of ECO DC, airtightness consultant and window fitter on the project, says there was a substantial difference between the pressurisation and depressurisation results on the first airtightness test. This is because during depressurisation, membranes and tapes are "sucked" against the building structure, improving the seal. This helped the team diagnose a leak at one window box. 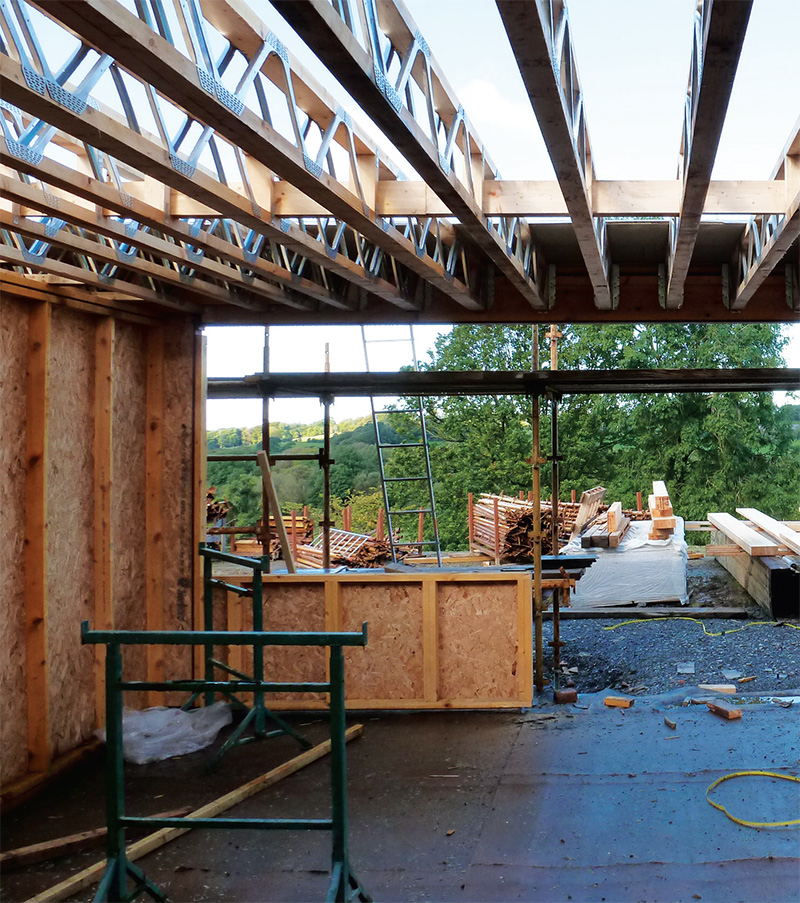 The windows were installed proud of the main timber frame, to form a complete insulation layer once cellulose is added

One gable wall was built too high during construction. Mike Neate says this would have led to thermal bridging where the gable structural stud passes through the roof insulation zone, and would have been tricky to seal for airtightness, so the height of the wall was lowered.

Rob says one of the best decisions he made was getting the whole project team together for a planning session twice prior to the build commencing to hammer out any issues.

"I guess that really did help, because the build went smooth," he says. “The contractor or his guys turned up every day of the build at 8am and left at 5pm and were very conscientious in their work, even though it rained almost every day they were on site.”

Rob looked into all sorts of ways to heat the house. There's no gas network in the area, and he didn't want to store fuel on site either. He was also keen for the heating to be as automated as possible, so he ultimately plumped for a ground source heat pump, supplied and installed by John Cantor. 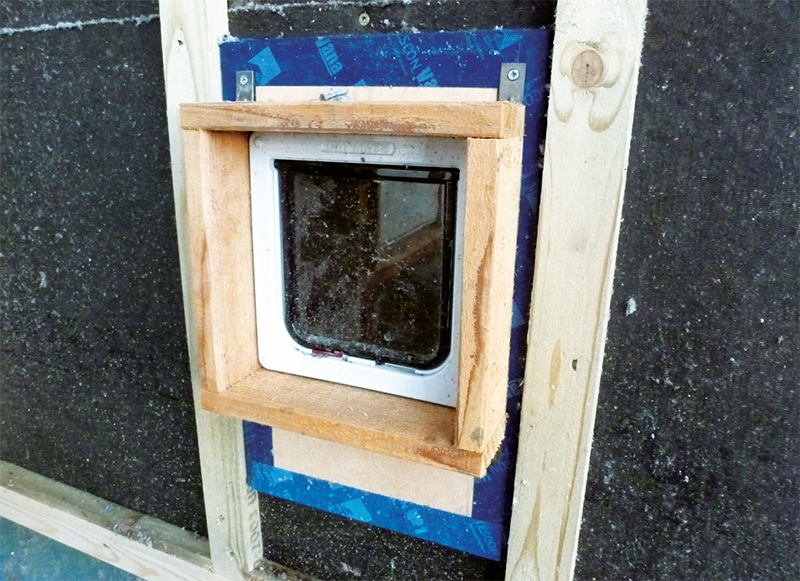 An airtight catflap, built by the client for just £25

"The first decision was between a high and low temperature range heat pump," John says. Rob went for a high temperature unit because, in a passive house, hot water rather than space heating is the biggest load.

"The second decision was buffer cylinder or no buffer cylinder. Since space was limited, we decided to use the floor screed as a buffer. This provides enough mass to absorb heat and minimise cycling of the compressor,” John says.

To aid buffering, 900 metres of underfloor heating pipe was laid down under the polished concrete floor. Extra underfloor heating was installed in the downstairs wet room and the studio, in which he works all year round and is single storey. Rob and Amy helped John install the pipework.

The team decided to remove all but one thermostat from the house for the first year as an experiment. They'll monitor the performance of the house closely for 12 months, then decide what kind of control setup will work best. "The house is mostly open plan, and being a passive house, the rooms tend to equalise," John Cantor says, "in part due to the self-regulating effect of underfloor heating in such a well-insulated house."

The house has a 3.4kW solar PV array too, also supplied and installed by Llani Solar. At the time of writing it has produced just under 3,000 units of electricity — compared to 1,000 consumed by the house. 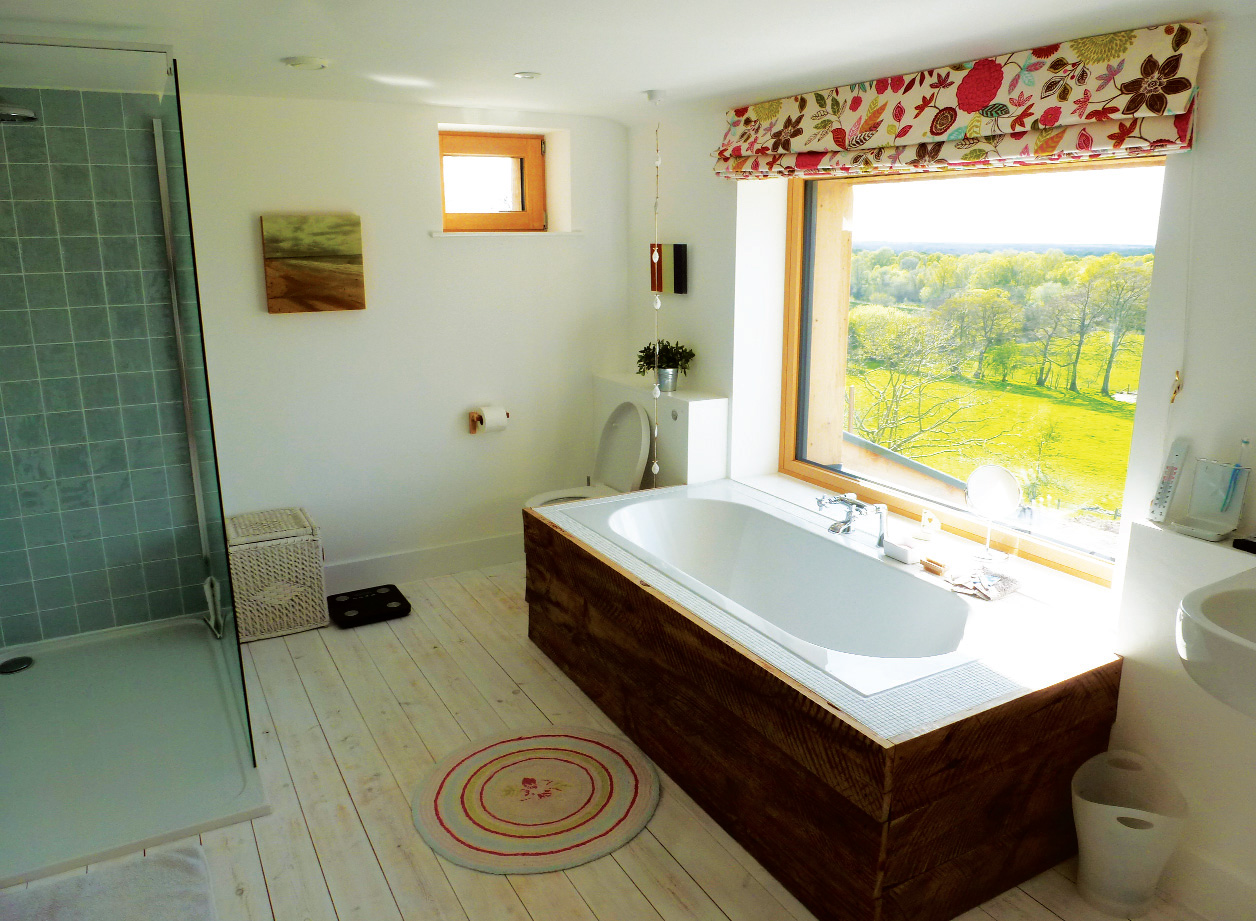 At one stage Rob considered ditching the PV to save money, but ultimately put it in. He's not regretting the decision. "You feel like you're making less of a mess of the world," he says. "Now we're really pleased with it."

He's happy with the solar thermal too. "It’s lovely to think you can have a hot bath or whatever, and there's no cost."

Nick Grant says when he came on board, meeting the passive house standard didn't look feasible. A mountain to the south east reduces solar gain, and there’s glazing to the north — not ideal for maximising passive gains.

But on the other hand, the house has excellent airtightness and a decent surface-tovolume ratio to its advantage. The wall and roof U-values are also superb.

The design heat load is 10 W/m2, while the space heating demand is 14 kwH/m2/yr, meaning the design meets the passive house standard even though Rob isn't looking for certification.

"Overall I think it is a lovely building and I look forward to return visits as it settles into the landscape," Nick Grant says.

Almost as soon as Rob and Amy moved in, west Wales experienced a spring freeze."Considering the plaster had only been on the walls a few weeks, and the concrete still hadn't dried out, it was amazing," Rob says.

"The house is such a fantastic pleasure to be in. I'm sitting at a window now looking out towards the sea. It's been 20.5 degrees or above for the eight months we've been here."

Rob says his 88 year old father, who was a builder himself, had told him: "You don't build your own house, you build other peoples' houses."

But then he came to see it. "It was great, they were really blown away. My dad said to me ‘I can't believe you took this on, but it's really good’. And I was dead chuffed."