In spite of having no construction experience Steve O’Rourke decided to make his self-build home a passive house, a feat achieved by a well-considered and collaborative approach.

Steve O’Rourke’s passive self-build in Co Laois didn’t start out passive. In fact, it didn’t even start out low energy.

“We got a house drawn up that was your typical sprawling boom-time elaborate design,” he says. “I knew nothing about energy efficiency, I knew nothing about passive house.” He began building in October 2009 and got as far as the rising walls before a change in personal circumstances meant that the project had to go on hold.

It was while he was away from the site that he began to rethink the entire build. The passive house concept had begun to gain ground in Ireland. Moreover, O’Rourke wanted a big house – in excess of 3,000 square feet. When he realised that running a house that size would generate huge energy bills, he re-applied for planning permission for a more energy efficient building, while reusing the footings that had already been put in place. In a bizarre twist of fate however, planning failed because on the day the planners visited, the site notice had fallen down. 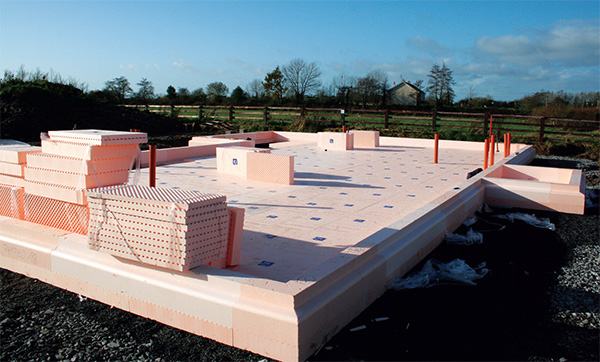 “So here was another delay, and at that stage myself and my wife Suzanne came to the conclusion after many months of debate that we would go back to first principles and design a passive house.” This was a tough decision to make, not least because it meant demolishing the footings they had already put in place. “The way I looked at it was, we had invested ten grand. Am I going to make a decision on a house that we will live in for the rest of our lives for the sake of ten grand? Plus we were fortunate enough to be in a position where that wasn’t the end of the world for us.”

Instead of relying exclusively on professional advice, O’Rourke went online, and on both boards.ie and this magazine’s predecessor constructireland.ie, he drew substantially on the experiences of other passive house enthusiasts, in particular a Donegal-based self-builder. “He was six to twelve months ahead of me on an identical spec build. We went with the same foundation system and the same wall build up. We went in different directions on the roof but I was able to learn from his mistakes and he was great to share with me.”

He also got in touch with the Passive House Institute in Germany and negotiated a deal for full PHPP (the passive house design software) modelling, guidance on detailing and certification. Detailing junctions to ensure the absence of thermal breaks is vital in passive house design. The approach the Passive House Institute took with O’Rourke involved reviewing the details he supplied and either approving them or declaring the detail thermally weak and instructing him to come up with something better. 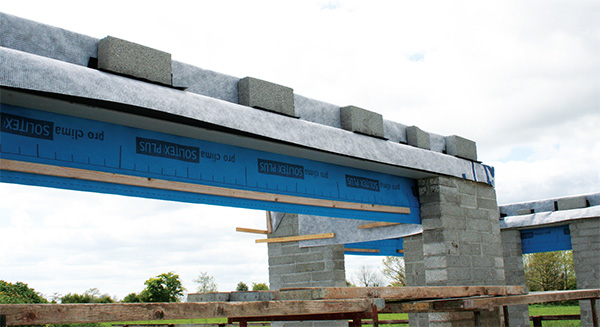 Though he had no construction experience, O’Rourke actually ended up drawing up many of the details himself. He points out that at the time in Ireland, it was difficult to find someone to model the junctions at reasonable cost. The house itself, while large, is a relatively simple L-shaped design. The combination of block-on-the-flat with external wall insulation – a Sto system featuring 300mm of EPS insulation adhesively fixed to avoid thermal bridging from mechanical fixings – together with an Isoquick insulated raft also helped by creating a continuous external insulation layer which automatically did away with many of the thermal bridges that would otherwise arise.

“I didn’t have any complex junctions, I didn’t try mounting a balcony through the external insulation to the masonry, I didn’t have to worry about thermally broken steel fittings...There’s polystyrene underneath the house and straight up to the roof the whole way around. So apart from a couple of soil pipes that go through the floor, and ducts for wiring, that was pretty much it.”

O’Rourke had a unique approach to hiring tradesmen. “Anyone I engaged with, I explained what I was trying to do. Then you let them get over the initial shock. I would say, ‘I’m not asking you to believe. There will be details which you will be unfamiliar with. If they contravene building regulations, speak up, if they’re going to set the house on fire, if they’re structurally questionable, again, speak up. If they’re just different, but there’s nothing wrong with them, you have to accept this and move on. If you’re happy to work with me on this basis, you can work with me, if we can agree a price, and if you’re not, thanks for your time.’”

O’Rourke also set great store by actually liking the people he worked with. The atmosphere he created onsite encouraged everyone involved to report problems and mistakes as they happened, rather than burying them in the hope that they would not be noticed. 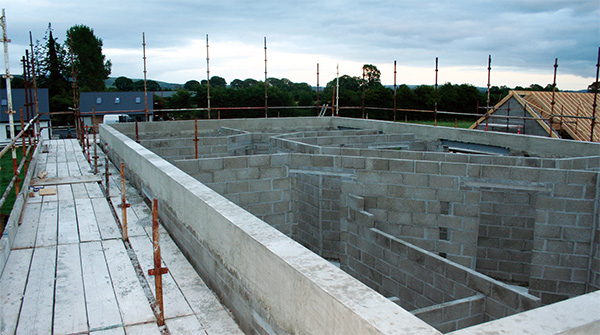 A ring beam forms part of the airtight layer

While he ran the project himself, he also relied heavily on carpenter Bryan MacNamara. Together, he and O’Rourke worked through most aspects of the build alone. In addition to relying on testimony from web forums, he also had support from Archie O’Donnell of Integrated Energy.

O’Rourke considered both masonry and timber frame construction, opting eventually for the former, primarily for cost reasons. The building required a rendered finish and at the time, the only cladding product which he considered suitable carried a price tag of €40,000. This alone made the timber frame option – which he would have favoured otherwise – prohibitively expensive.

Achieving an airtightness result of 0.6 air changes per hour or lower was of course one of the central challenges of the project, and one which O’Rourke was particularly focused on. In driving for that standard, he was heavily supported by Roman Syzpura in Clioma House, and by the experts at Ecological Building Systems, while Damien Hogan directed the installation of the airtightness membrane on the ground.

“Looking back, it wasn’t that hard, it was more about discipline with your trades,” he says. O’Rourke made sure he was present for all critical stages, including the installation of the hollowcore ceiling on the ground floor. Prior to the arrival of the floor, which was to be craned into place, O’Rourke’s blocklayer laid a protective layer of mortar all along the top of the wall over the airtightness membrane. He also instructed the hollowcore company that they could not crowbar the slabs into place. It was crucial that they be dropped into their final position from overhead in order to avoid dragging across the top of the membrane. “They did exactly what they were asked to do, and again it worked out. The membrane didn’t leak and that’s a notorious spot for leaks.”

O’Rourke also oversaw the construction of a ring beam at ceiling level on the first floor. While the beam is structural, it was specified primarily as an airtightness detail. “The idea is that mass concrete is pretty much airtight. That ring beam is exposed about four inches below ceiling level upstairs and it extends up about twelve inches above ceiling level, so my joists are fixed to that concrete, and downstairs we plastered up over that concrete.”

This approach meant that there was no necessity to tape the airtightness membrane around the floor joists. The downstairs plaster simply overlaps the airtight concrete. 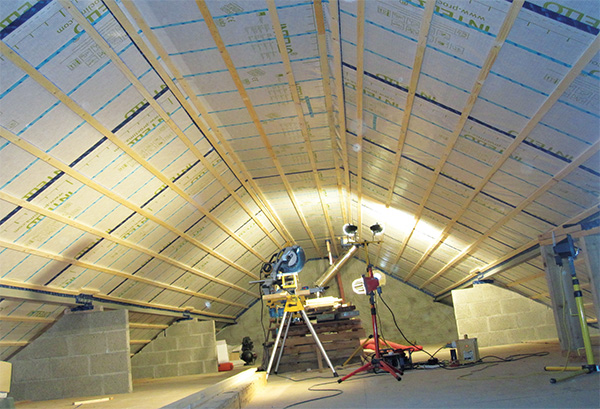 In the run up to the blower door test, O’Rourke sent out invitations to the self build community he’d been corresponding with online. “I said I’d love you to come along and see my moment of victory or failure.” The first and only test delivered a result of 0.32 air changes per hour, which amounts to a tremendous victory for a first-time self-builder with zero construction experience.

Attention to airtightness also extended to the Stuv Cube 16/78H, a wood-burning stove adapted for airtight buildings, supplied by Murphy Heating, and fitted with an outside air inlet directly beneath the stove. To ensure that the stove was genuinely room sealed, O’Rourke conducted a simple test: he lit the stove and blocked the external air supply. “The fire went out,” he says.

As the project progressed, O’Rourke admits to becoming increasingly focused on details. “I became entirely lost in the build process...I lost track of the need to keep the thing moving. I spent weeks worrying, visiting and revisiting before I would make the call.” He even considered ripping out electrical sockets to try and improve what was a hugely impressive airtightness result, simply because he knew it could be done. “I said to myself, that was a first attempt, we can do better. My friend in Donegal talked me out of it. He said, ‘You hit your results, move on, you’re talking about saving yourself a couple of euro a year extra if you improve it, but you could spend a grand getting there.’” 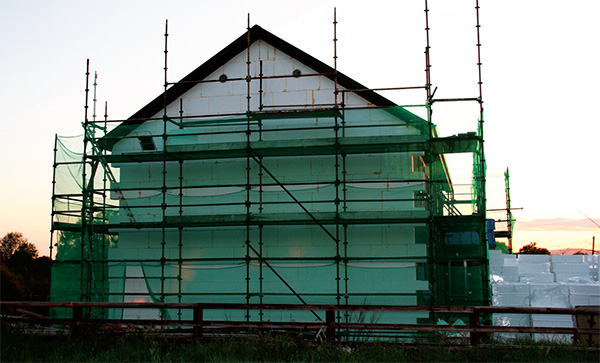 Steve and Suzanne O’Rourke eventually moved in in May 2012. The house, they report, has delivered on all of their expectations. “We had a party in the house last night, and people were asking, what heating system have you in? I told them that there was an underfloor heating circuit downstairs, but that we hadn’t switched it on since November 2012.”

So it was worth it? “I would do it again in the morning.” 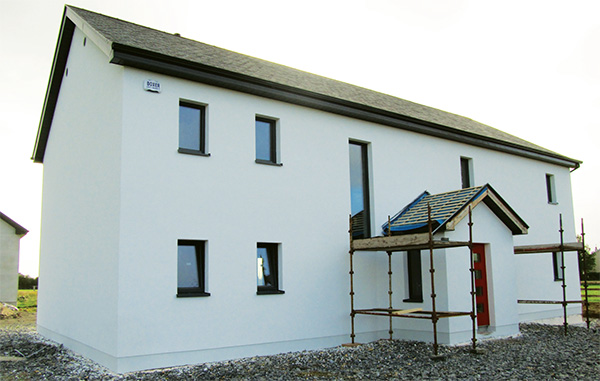 The house is rendered with a Gypsum plaster finish

Passive house certification: pending – some final detailing to be accounted for

Thermal bridging: Based on prescribed and precalculated values from the Passive House Institute