Virtually any building, anywhere can achieve certified passive house status, as these four transatlantic buildings show – including a Viennese skyscraper, an upgrade to an NYC home predating the Empire State Building, a German museum housing valuable works of art and a net zero energy home in New Mexico. 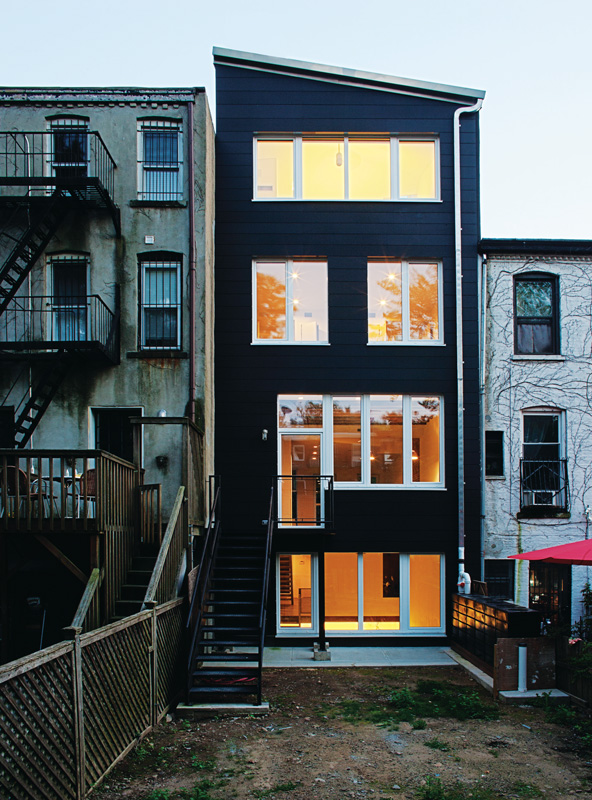 Architects Fabrica 718 and passive house engineers Zero Energy Design decided to insulate the walls and roof both externally and internally to reach the required performance. 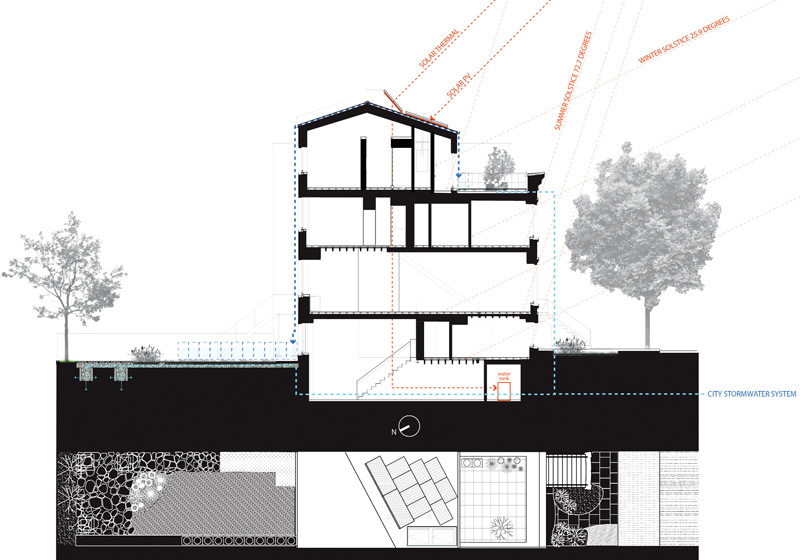 "We definitely were convinced by exterior insulation and were lucky that the building wasn't landmarked so we could actually use the exterior insulation," says architect Julie Torres Moskovitz. "We actually achieved our airtightness with [external insulation] combined with some critical membranes."

Spray foam insulation was used on the walls and roof internally. "We used open-cell spray foam, which is vapour permeable and will allow drying to the interior," says Jordan Goldman of Zero Energy Design.

The green agenda here is about more than just energy efficiency though: rainwater collection, solar thermal and photovoltaics also feature. The architects say the house – which was certified by Irish passive house pioneers Tomás O’Leary and Art McCormack of the Atlantic-straddling Passive House Academy – needs 90% less heat than a typical dwelling. 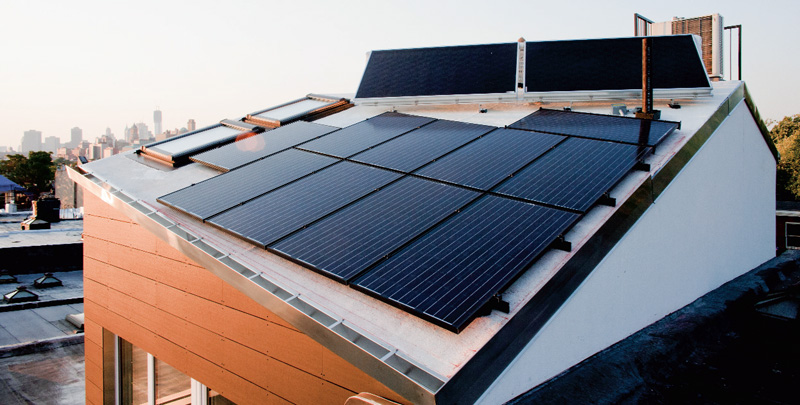 "We have been monitoring the house carefully for about 9 months...and making various tweaks along the way," Julie says. "Once we have 12 months of data — covering us through a complete heating and cooling season — we will have a lot more specific data on the home's performance. The home is doing very well now though and the owner is thrilled." 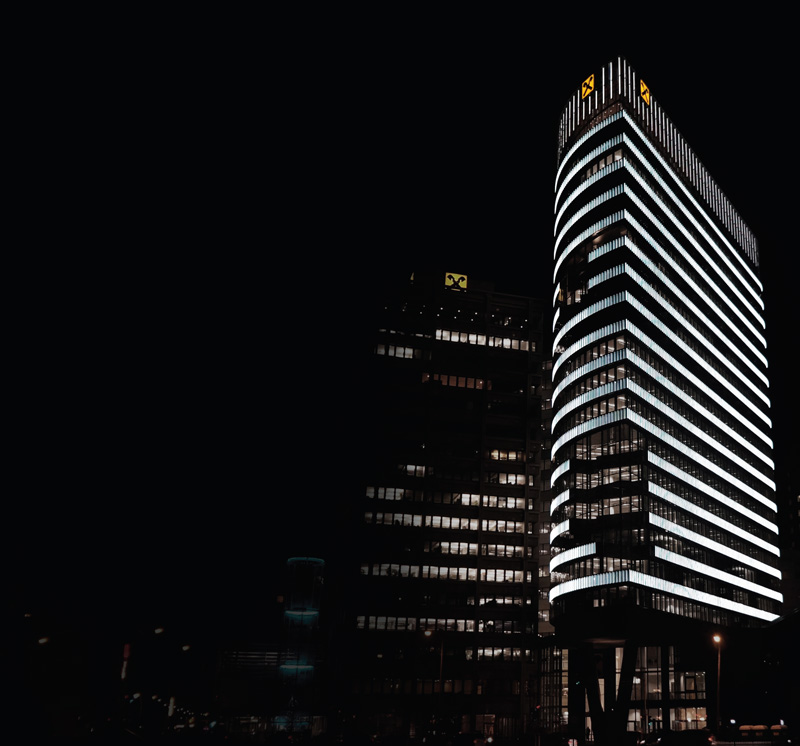 Tall buildings tend to be among the worst environmental and energy offenders – but one new Viennese project shows that high rise doesn’t have to mean high environmental impact.

From 1965 to 2009 the site housed the headquarters of OPEC (The Organisation of Petroleum Exporting Companies). That building’s now been replaced with the tallest building in the world to achieve passive house certification. Perched on the bank of the Danube canal, the glazed facade of RHW.2 rises almost 80 metres high. The 21-storey building is home to 900 employees of the Austrian Raiffeisen-Holding banking group, and also houses a kindergarten and public café. 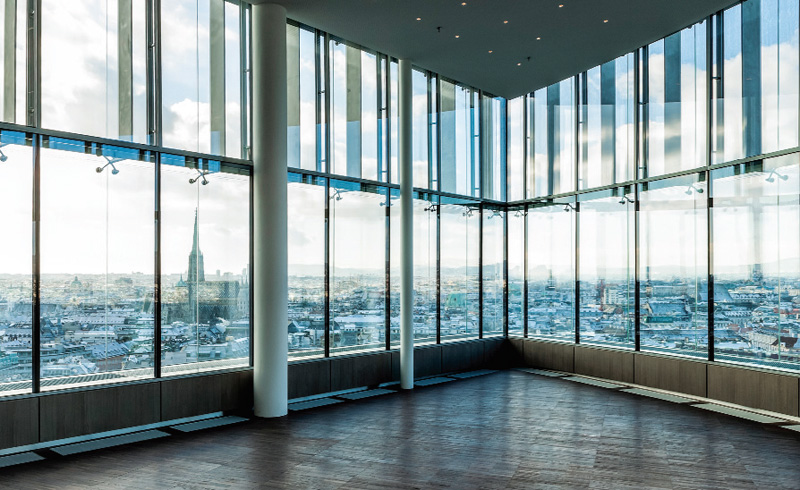 "This building proves once again that the passive house standard and good architecture are perfectly compatible," says Prof Wolfgang Feist, director of the Passive House Institute.

The tower's heating and cooling demand was reduced by 80% compared to conventional high-rise buildings. A photovoltaic array and geothermal heat pumps help to meet the building's electricity and heating demand respectively, but the bulk of the building’s energy is supplied by a biogas-powered combined heat, cooling and power plant. Even waste heat from the data centre is re-used, with cooling partly coming from the Danube canal itself.

Cool water from the canal is circulated via pipes embedded in the building’s concrete frame. The building also features a twin façade, consisting of triple-glazing in the building’s thermal envelope sitting inside a glazed façade. In addition to reducing the risk of glare and overheating, this design gives the building another advantage over typical high rises: windows can be opened without fear of the wind wreaking havoc inside.

The building’s green credentials go beyond passive house certification – RHW.2 scored close to a perfect score of 949 out of a possible 1000 points in achieving a gold rating under the ÖGNB (Austrian Sustainable Building Council) quality label.

In July, the RHW.2 tower's passive house certificate was presented by Susanne Theumer of the Passive House Institute on the 20th floor of the tower, overlooking the old city of Vienna.

The project cements Vienna's status as a passive house pioneer, with the city's new residential Eurogate passive house district currently under construction and due to be completed next year. 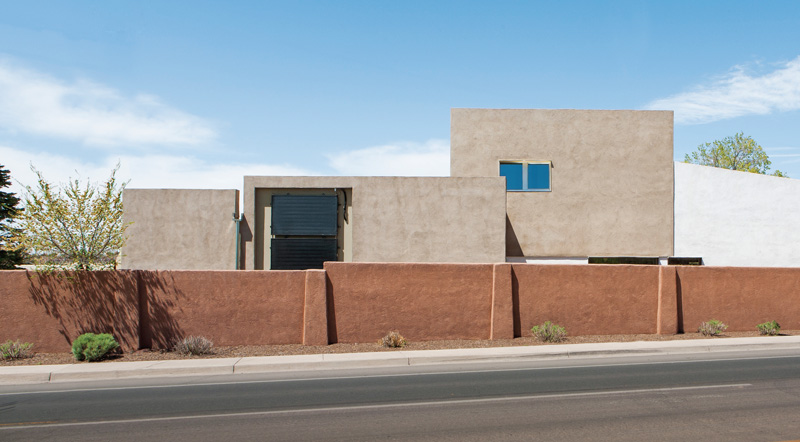 Architects MoSA didn't just design a passive house, they claim to have built a net-zero-energy home that costs 6.5% less per square foot to build than a typical dwelling.

Another building that was certified by the Passive House Academy, the VolksHouse also gets an Emerald rating — the highest available — from the National Association of Home Builders.

This timber-frame home boasts 250mm of EPS wall insulation, triple-glazed Optiwin windows and doors, plus solar thermal panels and photovoltaics. And it smashed the passive house airtightness standard with a pressure test result of just 0.3 air changes per hour (the requirement is 0.6). A layer of structural OSB boards within the timber frame structure provides the airtight layer. 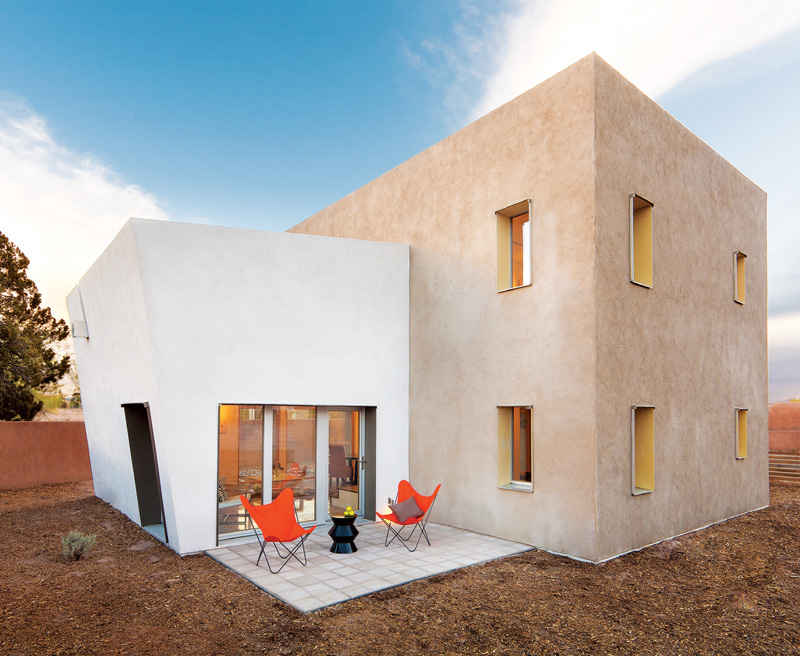 To avoid thermal bridging between the two structures, the house's garage is set ten inches away from the main dwelling.

Energy consumption and bills are now being monitored to verify savings. Architect Jonah Stanford says on the project website, worldecohouse.com, that one of the key ways to keep passive house construction cost down is to focus on simplicity.

"If you find that the systems are getting complicated then stop, and think about how you got there," he writes. 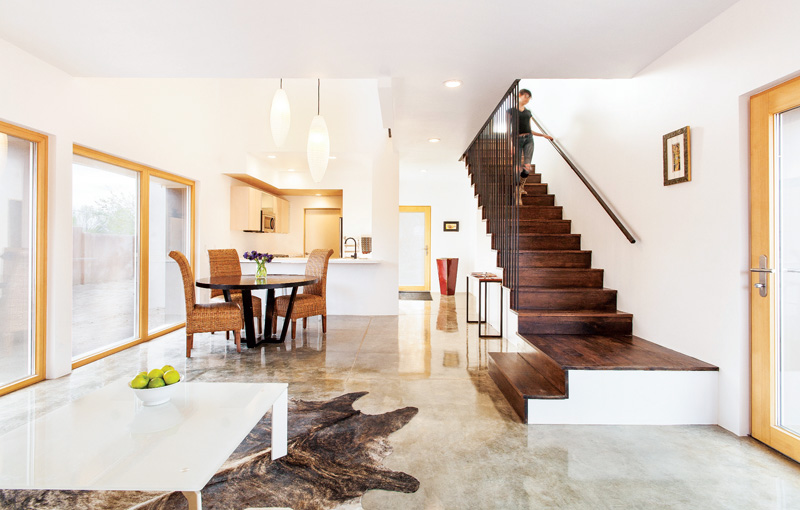 He also says: "VolksHouse sets a baseline for driving down construction costs, serves as a model for training and educating builders, establishes new standards for affordable housing, and unlocks economic potential for the expansion of green living and eco-construction. If a passive house uses far less energy and costs less to build, there’s no longer any reason to build anything else." 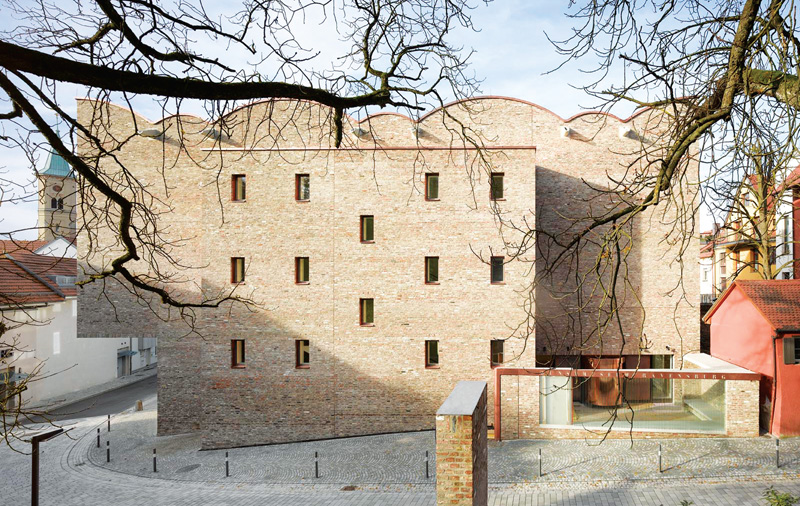 The world's first certified passive house museum opened in Ravensburg, Germany earlier this year. The museum houses the private art collection of advertising executive Peter Selinka, who died in 2006, and his wife Gudrun. Their collection features works of German expressionism and the avant-garde COBRA movement.

The external walls are constructed from a cavity wall system: on the outside, 200-year old bricks recovered from a demolished monastery, and behind this 240mm of mineral wool insulation, followed inside by concrete blocks.

"The greatest challenge was the small number of windows," says Florian Lang of Bavarian firm Herz & Lang, who were responsible for passive house planning and certification on the project. Artwork cannot tolerate natural light and is best displayed under artificial lighting, but this reduces the building's solar energy gains. However, internal heat gains from visitors to the museum help to compensate. "The passive house principle of keeping the heat inside the building turned out to work extremely well in this context," says Lang.

The building was designed by Stuttgart architects Lederer Ragnarsdóttir Oei and built by construction firm Reisch. 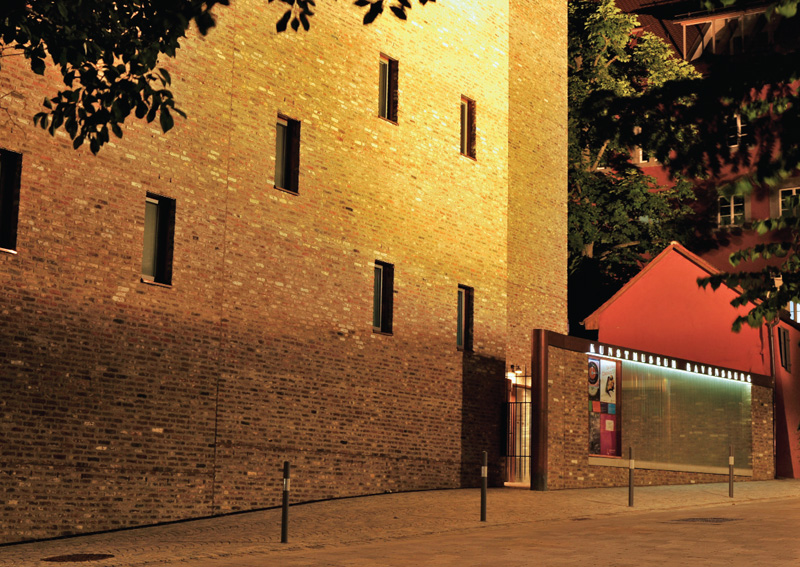 Some of the building's components had to be re-thought to meet the passive house standard. Cavity wall brackets with minimal steel content were developed to cut thermal bridging across the wall cavity, while the team even came up with a new Passive House Institute certified revolving door for the entrance.

Passive House Institute founder Dr Wolfgang Feist says this is a typical example of how the low energy standard can drive innovation.

"The passive house is an innovation engine. In particular small and medium businesses have always met the challenges head on and developed many new and improved 'made in Europe' products, which have significantly improved energy efficiency," he says.

"I very much hope that the museum in Ravensburg becomes a model for many other projects of this kind."

Heating and cooling — plus humidification and dehumidification — takes place via a ground source heat pump paired with a gas absorption heat pump. Conditions in the exhibition rooms must be kept very close to 20C and 50% humidity throughout the year. 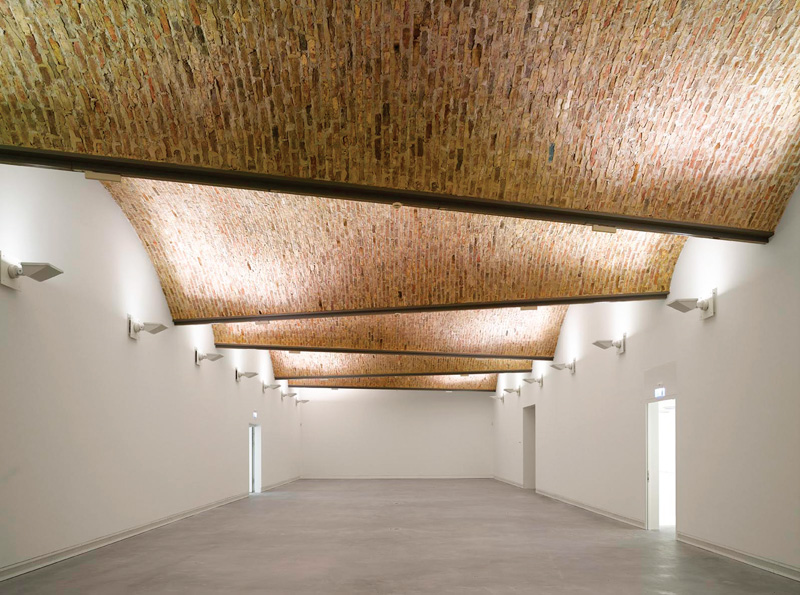 "In the end, it turned out that passive house was the perfect solution for the high indoor environmental quality necessary for these valuable pieces of art," says Florian Lang.

Stephen Quinn is a civil engineer with Herz & Lang.