Oil days are over

TV presenter Duncan Stewart has warned that soaring oil prices will “cripple our economy” unless Ireland embarks on an energy revolution. Backing our Energise Ireland campaign the architect has called for massive action to make our buildings, power supply and transport networks greener.

Meeting Construct Ireland in his production company’s editing suite near St Stephen’s Green, Stewart is brimming with ideas and opinions. “The oil days are over. We are in a state of emergency,” he says. “I think it’s going to come very quickly, I think we’re going to see oil prices rising. It’s going to hit people. We will see petrol and diesel for transport at two euro per litre very shortly.”

Peak oil was once a fringe eco issue, but mainstream analysts are starting to warn that global oil supply will peak in the coming decades — if it hasn't already. Peak oil is the point at which the rate of global oil extraction is at its all-time highest, and subsequently starts to fall or plateau. Many analysts believe that because the global economy is underpinned by oil, the peaking of supply will cause serious economic and social disruption.

Last November, EU energy commissioner Günther Oettinger said he believed we have already passed peak oil, while the International Energy Agency's chief economist expects output of conventional crude oil to plateau around 2020. The UK’s Energy Research Centre, Lloyds of London and the UK Industry Taskforce on Peak Oil have all issued similar warnings. Meanwhile, a report issued by Ernst & Young last month warned that if the price of oil hovers at $120 per barrel, the Irish economy will contract by 2.6% this year.

“If speculation gets back into the market of oil, and we see prices soaring because of artificial spikes, it will cripple our economy,” Stewart says. “People will not be able to drive, they won’t be able to move. Transport will come to a halt.”

Ireland is more dependent on importing energy than any other country in the EU15. We import 90% of our energy — almost two thirds of that is oil. “We really have to deal with breaking the addiction to imported oil,” he says.

He believes our dependency on imported oil — coupled with rising costs — will stifle hopes of an economic recovery. This view has long been echoed by Construct Ireland’s resident economist Richard Douthwaite. He argues that as the global economy recovers demand for oil will rise too, pushing its price up. This means we’ll need to spend more importing fuel, negating any extra income we might have seen from rising exports.

“It’s going to be a huge stumbling back holding back our economy,” Stewart says. “Prices of energy rising is going to make it more and more difficult for companies to compete.”

All political parties have preached about the need to develop a green economy — one that is energy efficient, based on clean energy and thriving with jobs in green, hi-tech industries. But Stewart suggests they’re only paying lip service to the idea.

“It’s all rhetoric at the moment, there’s no reality to it. We’re way behind the rest of Europe in terms of green. We’re probably one of the least performing countries in green tech.”

Like Construct Ireland, Stewart is calling for a massive drive to upgrade Ireland’s poorly insulated building stock. He reckons there are 1.6 million houses in Ireland in need of renovation — and that we should aim to get these down to 20% of their current energy use. “We’ve got an incredible challenge,” he admits. “We’ve got to transform our houses — all of our buildings — over the next 10 to 20 years.” 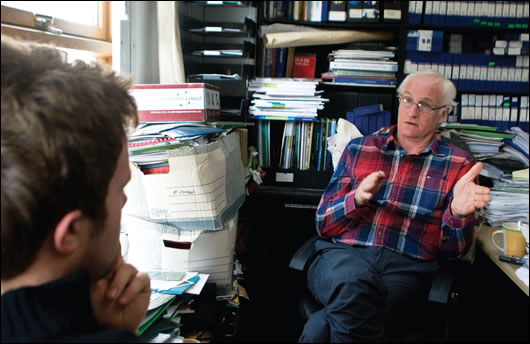 Ireland’s growing energy import bill will be a “huge stumbling block holding back our economy,” says Duncan Stewart, chatting to Construct Ireland deputy editor Lenny Antonelli at the office of Stewart’s
production company Earth Horizon in Dublin. “Prices of energy rising is going to make it more and more difficult for companies to compete,” the presenter says.


Doing this, he estimates, will cost €40 billion. “That’s not going to come from grants. We have to move from a grant structure to a different way of incentivising.”

From 2013, Labour and Fine Gael plan to introduce a pay-as-you-save mechanism to fund energy upgrades. This will allow homeowners to renovate for no upfront cost, instead paying over time on their utility bills. But because their energy costs will be lower after the upgrade, adding the cost of the retrofit shouldn’t leave the bills any higher than before the work was done.

Construct Ireland has campaigned extensively for pay-as-you-save over the past two years. Stewart believes this is one part of the solution — the other is making homeowners aware how much they’ll spend on energy if they don’t upgrade. “I think a way of doing it would be if we put a value on the energy we’ll consume in our homes over the next 25 years,” he says.

He offers a quick calculation: if an oil-heated house has an annual heating bill of €2,000, and the price of oil rises by 5% per year over the next 25 years, it will cost about €100,000 to heat it over that time period.

He wants to see this kind of calculation included in a more sophisticated building energy rating system — one that estimates the cost of a building’s energy use over the next 25 years.


His logic is simple: if a homeowner knows they’ll be spending €100,000 to heat their house over the next 25 years — and that upgrading will cost €30,000 and substantially reduce their bills and improve their comfort — upgrading suddenly looks more appealing. “It could drive a change in my view,” he says.

Stewart says income from the carbon tax should be ring-fenced to provide pay-as-you-save loans, and to alleviate fuel poverty. He’s also calling for a property tax based half on a dwelling’s value and half on its carbon emissions.

Public and commercial buildings should have to display their 25-year energy certs publicly, he says. “It’s making them realise what their energy consumption is. Every supermarket should have it up in its foyer, every office building, and every shop would have it up where the cash register is.”

Stewart says a massive retrofit programme would have huge economic benefits. Not only would less money leave the country to pay for oil, but tens of thousands of jobs could be created. He estimates that for every energy upgrade, about 50%-60% of the cost is labour. “We probably would have 40,000 or 50,000 people employed continuously in this area if we put our mind to it.”

That’s just direct labour though — there’s also potential for the developments of industries that make energy efficiency products like insulation. “If you know there’s going to be a market and it’s a guaranteed market, industries will come into that market and fill that gap,” he says.
Of course the energy efficiency of our buildings is just one side of the coin — the other is the electricity that powers them. “I think we should be looking at onshore and offshore wind, and we should also be looking at micro wind.”

“At the moment we’ve got huge opportunities along our east coast [for offshore wind] that we’re not taking advantage of yet,” he says. “By 2020 we’ll be exploiting on the west coast, with floatable turbines and also wave energy, into the deep Atlantic where the big energy sources are.” He reckons our rich renewable resources and low population mean we won’t need to face the question of whether to embrace nuclear power or not. 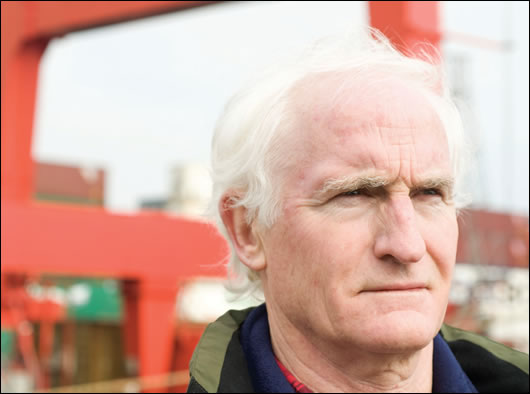 He also sees huge potential for biogas, a fuel that can be made from various types of organic matter, from farm slurry to grass. It could be pumped into the national gas grid, used to power cars or for combined heat and power (CHP) plants. CHP is a power-generation technology that produces both heat and electricity from the same source.

He sees biogas and electric cars driving side by side in future. And he envisions farmers’ co-operatives using anaerobic digestion to produce biomethane, and selling it via their own filling stations. He wants to see electric or biogas-powered trains throughout the country, with express inter-city services on new tracks and local, commuter and expanded freight services on the old lines.

Stewart credits his youth in the relative wilderness of Glenasmole in the Dublin mountains for his passion for green issues. "My parents were a bit back to nature, you know, but we loved it up there," he says.
While studying architecture at UCD he got involved with the environmental group Rage — Radical Action for a Good Environment. Rage campaigned on issues such as the demolition of Georgian buildings, the pollution of the Camac river and the replacement of glass milk bottles with plastic. They fought battles on planning too, including the expansion of Tallaght. "It was quite obvious that this was all being led by developers and politicians," he says. "The cronyism that was going on was huge."

But he didn't apply his green principles to his architecture until the 1973 oil crisis hit. After working in Amsterdam and Vienna, he was back in Dublin running a small practice and lecturing in DIT.

"The oil crisis came and I just discovered that everything I was doing was completely mad," he says. His buildings were “completely wasteful in energy”, he says. “It was just totally stupid. And I knew straight away that I couldn't be giving my clients these buildings. So basically I looked at how I could change my architecture."

The oil crisis changed his approach to design too. "It brought me to a new aesthetic of architecture.”  A sustainable building, he says, should be, "expressed visually by the way it functions ecologically.”

“We're still designing for the oil age. We're using glass in a completely inefficient way." He's calling for "a whole new aesthetic” of sustainable architecture — one that’s identifiable and appealing to the public. “Because it's not for architects, it's for people.”

Stewart made his first TV show — Our House — in 1991. He says architects weren’t engaging with the public at the time. "My profession wasn't interested in this, and they weren't interested in engaging with householders, so I felt a TV programme would be a good way of doing this." He's done over 350 shows since, including many episodes of Eco Eye and About the House.

As Construct Ireland went to print, the Fine Gael and Labour government was just bedding in. Stewart says our new government have huge opportunities to put us on a sustainable energy path.

He lists off the green issues he'd like to see Fine Gael and Labour prioritise: a climate change bill, water conservation, biodiversity, special areas of conservation, protection of the bogs — it goes on.

"There's so many priorities," he says. "We've got to get our greenhouse gas emissions down and meet our targets."

New energy minister Pat Rabitte, he says, has an opportunity to start an energy revolution. "He's got great opportunities because energy's going to become such a big issue, and we're facing a crisis with oil.”

“We are blessed with the natural resources. We are sitting on a gold mine with renewable energy,” he says. “This is our lifeline.”