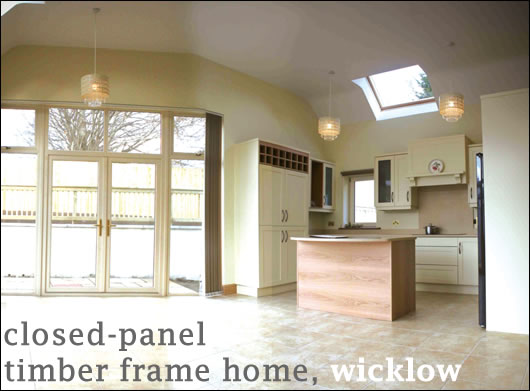 McGlinchey was looking for a closed-panel system – which means wall insulation is fitted in the factory rather than on site – and was seeking an Irish manufacturer. When it came to building the 250 square metre house, he plumped for Wexford manufacturer The Timber Frame Company (TTFC).

Energy efficiency was high on his list of priorities. “I wanted to get as good a rating as possible,” he says. “I was trying to get an A3 rating on the house, with good insulation and airtightness.” 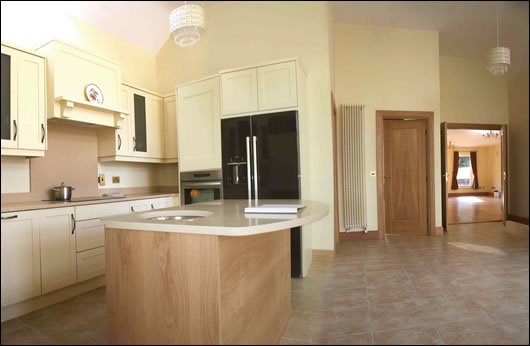 McGlinchey chose a wall system with a U-value of 0.18W/m2K – from the inside-out it features 12.5mm fibreboard, an airtight vapour barrier, 220mm of Metac insulation quilt between the studs followed by 9mm OSB board and a breather membrane. Manufactured by Isover, Metac is a glass wool insulation produced from silica sand and recycled glass.

The build-up is finished internally with Rigidur, a high density plasterboard composed of gypsum, cellulose (recycled paper) and water – both the product and manufacturing process are certified by the Rosenheim Institute of Construction Biology and Ecology. Outside, the building is clad with traditional concrete block, with a ventilated cavity between the block and timber frame. 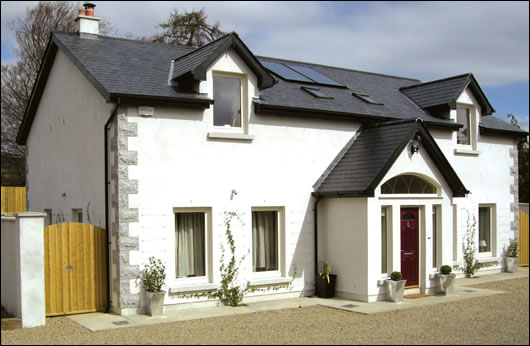 He discusses how the company’s timber frame systems tackle cold bridging. “[They] meets all current regulations with regards to cold bridging. We’ll look at each design individually and try to eliminate cold bridging as much as possible.” He mentions balconies as an example of a common point of cold bridging, and says TTFC prefer to support balconies from underneath rather than with a cantilever out from the house, which would create a significant cold bridge.

McGlinchey chose double-glazed PVC windows from another Wexford manufacturer, Senator – the units have a U-value of 1.5W/m2K and feature low-e glass. They carry an A rating from the British Fenestration Rating Council – the BFRC rates the energy performance of windows from A to G based on factors such as the insulating ability, airtightness and solar gain of the windows. TTFC fit and seal windows and doors – from various leading manufacturers – into the frame in the factory before transporting the panels to site.

McGlinchey asked TTFC to get the airtightness down to 3 air changes per hour (ACH), but they managed to get even lower – to 1.87 ACH. Closed-panel construction allows for careful attention to detail and sealing in the factory, and once on site TTFC did the final airtightness detailing, which included sealing the overlapping panels with silicon. “If it’s two storeys you need to make sure the vapour barriers run through from the ground floor to the first floor,” Devereux explains. “All windows and doors are factory fitted and sealed around in the factory.”

McGlinchey chose to heat the house with a Vortex condensing oil boiler from Grant, with heat distributed via standard radiators. He also put two 2m x 1.1m flat plate Grant solar panels on the roof – he chose flat plate panels over evacuated tubes as he feels they’re better suited to the look of the house. “They’re producing plenty of heat,” he adds.

He put in a solid-fuel burning stove too, which is connected to a Schiedel Air chimney. The chimney is a sealed system – combustion air is delivered directly to the appliance from outside the house, with no air taken from inside. Flue gases from the stove are released to the outside, but no heated air from inside the house is lost up the chimney – in essence it’s designed so there’s no exchange of air between inside and out.

The closed-panel system from The Timber Frame Company being assembled on site - the walls here have a U-value of 0.18 W/m2K

Outside, the house has quite a traditional facade, with a more modern interior that includes two reception rooms, a kitchen and dining area, utility room, plant room, en suite bedroom and WC downstairs, and four more bedrooms – two of them en suite – and bathroom upstairs. That’s another reason McGlinchey was keen on TTFC – they allowed him to develop his own custom design with his architect rather than asking him to choose from an existing selection.

McGlinchey considered heat recovery ventilation but opted against, both because of budget and because he wasn’t keen to run ducts throughout the house. Instead he installed Fresh 90 ventilation units in the walls. The units sit in the wall between the outside and inside and allows for user control over minimum air flow. They feature a pollen filter too. “It’s an improvement over just pushing a hole in the wall, there’s more control over the flow,” he says.

The house features two reception rooms downstairs – the windows throughout the house are double-glazed with a U-value of 1.5 W/m2K

With only some internal decoration left to be done, McGlinchey reflects on the project. “The main thing is the house is airtight, I’d say that’s probably the most important thing. Secondly it’s very well insulated.”

He hasn’t finalised the BER yet, but is hoping to get an A3. He data logged the house during the freezing months of January and February and was impressed with the results – while he says a conventional house will lose all of its heat in an hour, his house drops just 2C over eight hours. “It’s a dramatic difference,” he says.