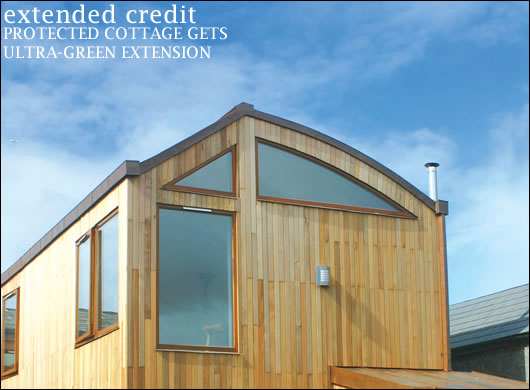 Award winning green architects Solearth have been at the vanguard of sustainable design in Ireland for over a decade. Solearth’s Brian O’Brien describes a highly ecological extension designed by the practice in west Dublin.

The clients Ruth MacMahon and Keith Murphy approached Solearth in 2005 for a consultation on their early 20th century cottage in Rathfarnham, Co. Dublin. We discussed the context of the building, their lifestyle and the kinds of houses and spaces they liked and tested each other’s eco ambitions and expectations. The consultation turned into a full appointment to transform the existing building into a bright, energy-proofed and healthful family house. Importantly, the clients didn’t feel that the main cottage itself should receive much attention as it had been recently upgraded and instead urged us to concentrate on the design of the extension. Our goal as architects then was (as it usually is) to uncover the untapped potential of the site and brief by (ecology led) design explorations. More specifically, we wanted to create a new element that contrasted with the old in terms of scale of spaces, orientation / solar access, connection to the garden and healthfulness.

Early design research showed that the existing building, dating from approximately 1903, was deemed a protected structure due to it forming part of an enclave of semi-detached workers cottages. Essentially two room cottages (with returns and outbuildings to the rear accommodating kitchens and outhouses), the buildings are of an intimate scale with simple attractive external details to the street side. 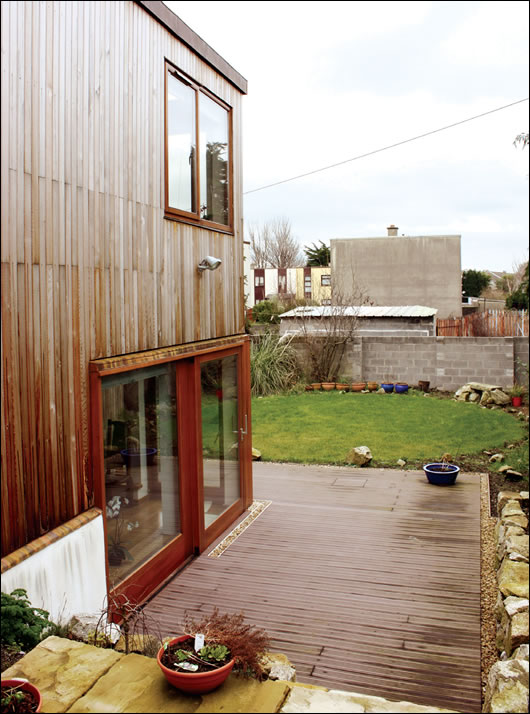 A wood polymer composite from JFC Earthwood was chosen for decking 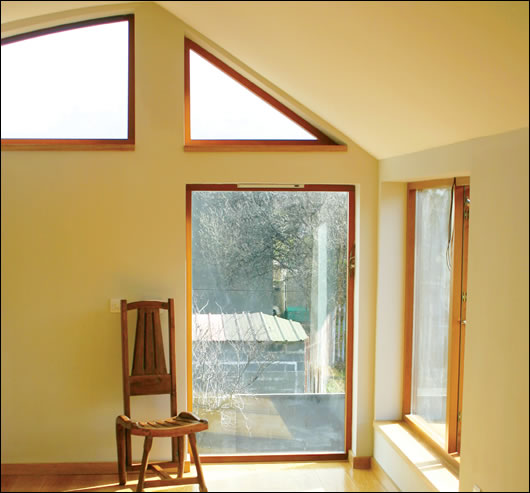 The new extension was designed to be bright and spacious


The current cottage was at street level but a slope in the garden to the rear seemed to allow the possibility of making the extension be a two storey element. However consultation with the local authority (as part of the pre planning process) threw up two interesting constraints on this emerging design. The conservation section requested that the height of the extension not be above the ridge height of the existing cottage, while an existing shared sewer running under the garden (and therefore under the extension) led the drainage section to impose this as a lower limit for the buildings sub-structure. Essentially there was 5.6m height in which to build.

The design that evolved zoned the existing cottage as a ‘night/winter’ zone – snug, heavy and relatively dark – leaving the new extension to be made of more bright, larger scaled spaces with a layered relationship to the garden. Importantly, the extension could stand at right angles to the east-west cottage and achieve perfect solar orientation. A single storey link connects the two together while providing the visual differentiation between old and new – a pre-requisite of adding to protected structures in any case. The link accommodates a generous entrance hall now at the centre of the house and thus minimises space lost to circulation.

Thus the extension could incorporate the necessary features of passive solar design, smaller windows and service zones to the north, larger openings and habitable spaces to the south, super insulation and so on.

The form was to be simple, working with the minimum ratio of exposed envelope to useable space inside, while – hopefully – making a design virtue of this necessity. At Solearth we try to first replace sustainable (servicing) technologies with the building space and fabric or secondly, if we must rely on technology, to integrate them into the form of the building. The roof form here does this; to the north it’s a curve (inhabited so as to maximize usability within the height constraints set by planners), while to the south it slopes toward the sun to allow incorporation of the solar thermal system at the optimum angle. 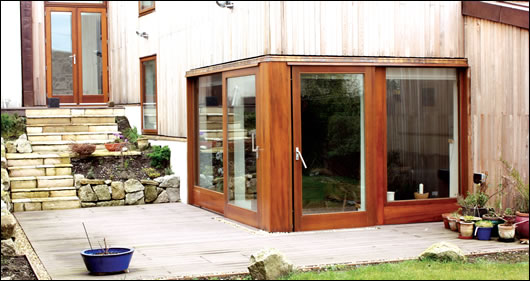 Due to the slope of the garden, the architects were able to add a two storey extension to a single storey dwelling 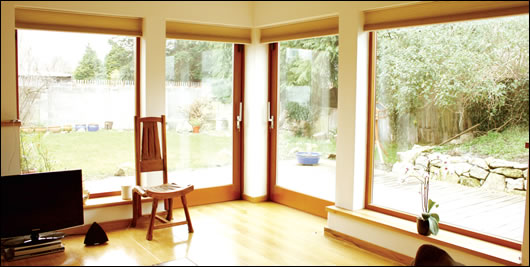 The extension achieves perfect solar orientation, and there is plenty of glazing to take full advantage


The building is super-insulated with the main envelope elements having U-values of 0.19W/mk. This is achieved strictly with natural insulants affording more breathability – a benefit to both the timber structure and the occupants, and lessening the embodied energy of the building overall. The walls are made of 150mm main studs with sheepswool insulation between, onto which the dynamic vapour check is applied and an additional insulation layer added. This in turn protects the membrane, provides a space inside it for first fix electrics and plumbing (again to protect the integrity of the air-tightness layer) and adds to the insulation performance of the wall.

Internally the walls are finished in plasterboard, while externally timber cladding to the south and lime render to the north elevation and street (a planning stipulation) above a ventilated cavity form the outer skin.

The devil of construction is of course in the detail and there were many on this project that needed thought and thoroughness. 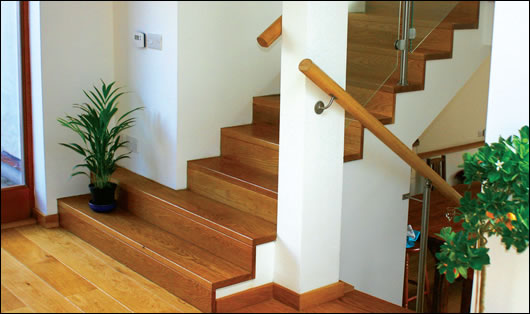 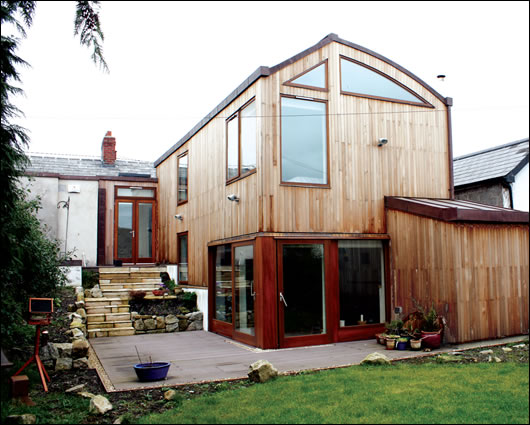 
Our engineers, Casey O’Rourke, designed the timber frame which, despite having large corner windows at ground level, has only one steel element in it – quite a feat. They also solved the thorny conundrum of how to keep the shared sewer, now under the building, working and stable. Part of the extension was below ground level and required tanking also.

The planning stipulated that the new building join the old below eaves level on the protected cottage which would have led to a height of two metres so a stepped beam had to be employed, low at the eaves and immediately stepping up to a more acceptable ceiling height across the link. An inner layer of insulation was added where the rising walls, serving as semi basement, were of solid construction leading to the development of a wainscoting detail to the interior.

The limitations in the height of the main day room ease once past the existing sewer, where a split in the level increases the volume of the living room adjacent to the garden. This split level leads to the development of two bespoke elements; a moveable stair that allows flexibility in use of the space and a storage unit running the width of the room and under the upper level.

In terms of services, a zero carbon heating system and solar thermal system were to be installed. Previous experience had led us to be wary (on domestic scale projects where typically a mechanical and electrical consultant isn’t involved) about the successful integration of different ecological systems together. Typical experience for eco architects is that the solar thermal system may be fine but not speak to the heating system, or the biomass or heat pump heat source may not link to a pre-existing radiator system, and so on. Each part may be fine but they may not operate as one whole leading to a loss of effectiveness. On this project we selected Micheal Meehan of Ecosave to design both the sustainable technologies, the less challenging underfloor heating system and the conventional domestic plumbing arrangement, as well, crucially, as the signals and communications between them. This was complicated by the client’s understandable preference to maintain the existing gas boiler as a back-up to the new biomass heating system being installed, but it meant we had a single point of reference for queries and it worked out well.

A new in-room 13kW Palazzetti biomass stove is the focus of the living room and supplies water to the underfloor heating system as well as heating the largest space in the house directly.

A small Thermomax solar thermal system links to the domestic hot water system via a large 300 litre calorifier, which is also heated by the biomass boiler.

Significant effort went into trying to create a pellet storage and conveying system that worked with bulk buying, suited the dimensions of the design and supported the lifestyle of the occupants. Off the shelf storage systems from Darionti were considered for storage but in the end a four tonne sealed but breatheable pellet bin from Biobin Ltd was selected and a timber cladding wrapped around it to blend it into the aesthetics of the house. In terms of conveying of pellets, we as architects sought a system that delivered the pellets from the storage bin to the location at stove, thereby minimizing labour. Customized augers and even vacuum system conveying devices were explored but for various reasons including costs, were discarded. In the end the client proved quite willing to manually load the pellets keeping it, as the saying goes, as simple as possible but no simpler!
Other aspects of the construction were interesting also. The timber frame was chosen for its renewability, low embodied energy and speed of erection. This would normally lead to a lightweight underfloor heating system. This was not our preference and we instead employed a metal deck and lightweight screed system called Easy Screed, allowing for a more thermally massive emitting surface. 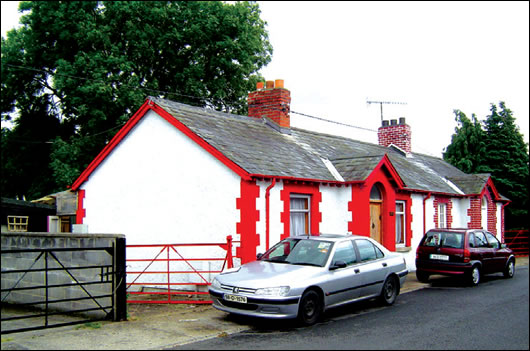 The walls are lime-rendered to the street-facing north 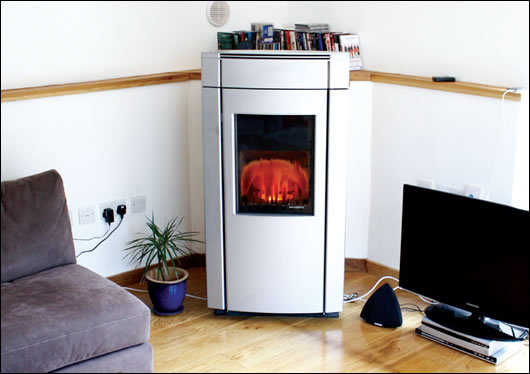 A Palazzetti biomass stove is the focus of the living room


Windows and doors were specified as being from temperate softwood FSC. I had previously used cedar on my own house and Hillcrest joinery sourced the same wood and made the windows and doors in their joinery.

Insulation, as mentioned, was of natural origin. Principally this was sheep’s wool with wood fibre Holzflex installed in the inner services cavity. To allow back diffusion in summer, these were combined with the Intello dynamic air-tightness/vapour control layer supplied by Ecological Building Systems.  In our new Emerald project, now under construction, we will supplement this approach with an extra anti cold bridge wrap of Gutex insulation outside the studs.

Our approach to the external envelope is consistent with ecological precepts. The walls here are clad in (again) cedar heartwood – untreated – to the south and west. To the north and east, they are finished in a lime render laid onto Heraklith wood wool boards, a detail we’ve employed in the Daintree Building and elsewhere. The roof cladding follows our principle of using a small amount of copper where necessary, a high embodied energy material to protect a large amount of a lower embodied energy material (the timber frame and cedar cladding). Critically, copper is one of the few materials that, due to its value, attractiveness and the fact that it is mostly used on the outer surface of a building, is salvaged and reused over and over again.

All finishes and protective coatings were organic, with Auro paints supplied by Healthbuild Consultancy through their Dublin distributor, Klee Paper. To avoid the use of tropical hardwood (an absolute no-no in Solearth, FSC or not) we chose to specify a composite ‘new’ material called Earthwood. It’s a blend of chipped plastic (HDPE), wood dust from sawmills and benign polymer binders.

In the end, much credit goes to the builder Martin Sherwin, of MTS Construction, for creating a beautiful green home on a tough site under a demanding architect! 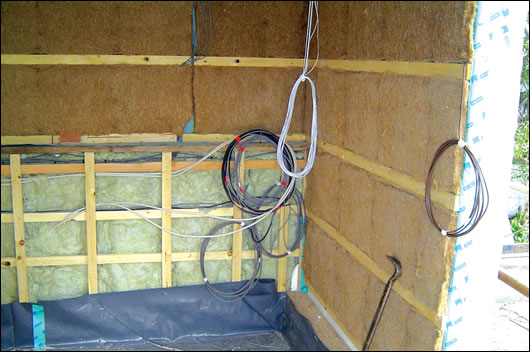