Most energy upgrades to historic homes in architectural conservation zones take a fairly gentle approach to insulation and airtightness — this one did the exact opposite.

For an architect designing the energy retrofit of a Victorian home, who better to have as a client than a building physicist?

Robert Prewett of Prewett Bizley oversaw this east London upgrade for homeowner Robert Cohen, who has a doctorate in energy conservation.

In 2008, Robert and his partner Bronwen bought a run-down house in Hackney with the intention of upgrading. The dwelling sits in an architectural conservation area, so any upgrade would have to tread lightly on its character.

“We were initially thinking we would do the conventional energy efficiency upgrade, relatively modest,” says Cohen. 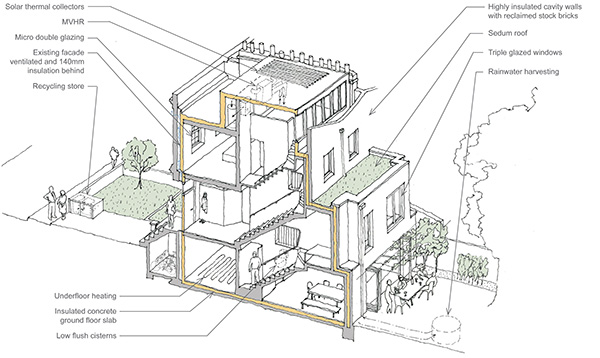 But the couple and their architect studied the options, and developed a more radical plan — a deep energy retrofit that would require gutting much of the house.

Prewett was consciously avoiding small extension projects at the time, but couldn’t resist taking on an ambitious energy upgrade.

“Until the project was complete Enerphit didn’t even exist,” he says. “But I think there was implicitly the aim of: how far is it possible to go?” 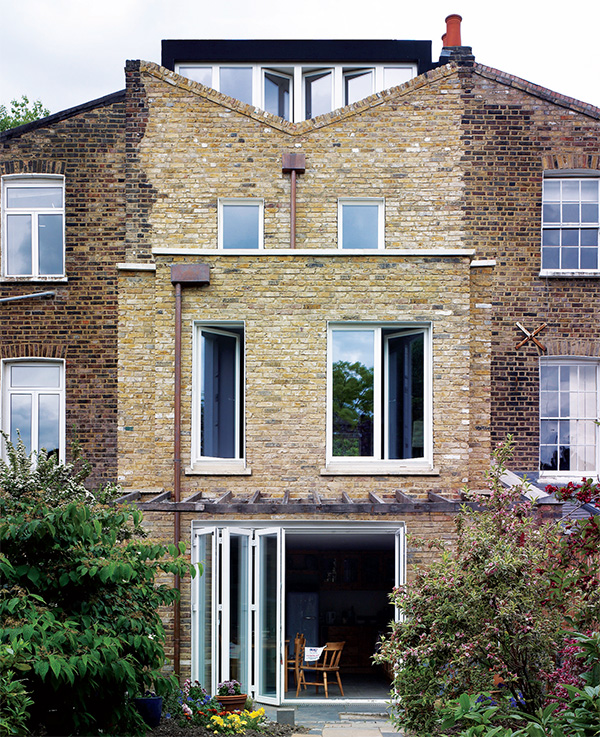 “In some ways it was probably a bit naive, but sometimes a bit of naivety is probably good.”

Convincing the planners to approve the project took over a year. “They were very nervous about the invasiveness of our approach, because we ended up stripping out most of the house interior and rebuilding it,” says homeowner Cohen.

Personnel in the planning office kept changing, which slowed things down further, and it took a last minute meeting with a senior planning official to keep the project on track. 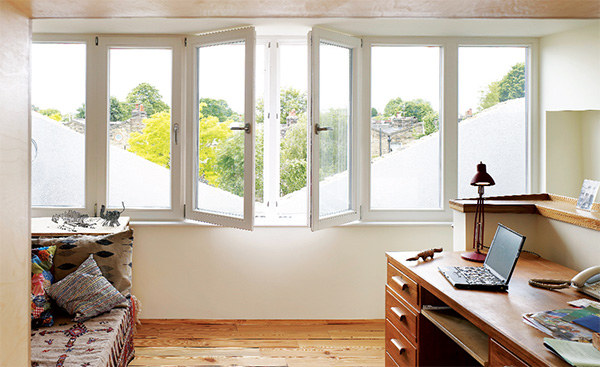 “It went through at the last moment. It was quite a strange sequence of events, because up until that meeting we really did think we were going to be refused,” Cohen adds.

He says passive house principles guided the design — though he knows the very term can be controversial.

“There is a sort of feeling in the UK, if not further afield, that people who say they’re designing to passive house principles are not doing passive house properly, and they try to shout you down.”

But in this case, it accurately reflects their approach. “We were trying to do passive house properly, but we had constraints.”

The team removed the rear facade and built a new cavity wall system in its place: brick externally, a 200mm cavity insulated with Knauf Dritherm 32, and lightweight concrete block inside. Low thermal conductivity TeploTie wall ties, and Foamglas Perinsul blocks at the junction between inner leaf and floor, cut out thermal bridging. Foamglas Perinsul is a low thermal conductivity structural block made largely from recycled glass.

The team insulated the front wall with Knauf’s Thermoshell internal wall insulation system, which employs polystyrene-OSB composite studs to minimise thermal bridging, meaning less insulation is needed and less floor space is used. Here there’s two layers of studwork — one vertical, one horizontal — insulated with Knauf Earthwool. A ventilated cavity just inside the existing masonry will help the structure dry out should any moisture accumulate here. The party walls are insulated too, partly in case the neighbouring houses are ever unheated, partly to provide an acoustic barrier.

Downstairs, the team insulated the ground floor with Knauf Eco Floorboard, a rigid insulation board made of extruded polystyrene (XPS).

The front windows are of bespoke joinery with slim double-glazing, chosen to maintain the house’s traditional facade.

“Those windows contribute a lot to the heat loss of the house unfortunately,” Prewett says. But he adds: “I think on this one we struck the balance between conservation of history and conservation of the planet probably as best we could with the technology we had.”

The team completely overhauled the house’s internal layout. At the lower and upper-ground floor, the rear wall was built further out to extend the living space, and its flat roof is topped with a mat of sphagnum moss, while the old dog-leg staircase was replaced with a straight flight. Prewett says these two changes opened up the house substantially. Upstairs, a bedroom-cum-study was built into the attic — an external Mermet blind was fitted on the west facade here to control glare and overheating. A new flat roof on the attic space was constructed with 160mm of PIR insulation, and provides a shadow-free platform for a small solar PV system.

The project was Prewett’s first deep energy retrofit — and a learning experience. He says that while thermal bridging could be modelled, predicted and managed, airtightness was more challenging.

The first blower door test score came in around 3.5. “That was the best result the tester had ever got, which made the builder really happy but my life really difficult, because I had to say it wasn’t good enough,” he says.

The team brought in airtightness expert Paul Jennings to hunt down leaks and ended up with a final result of 1.3 air changes per hour — exceptional for such an old property. 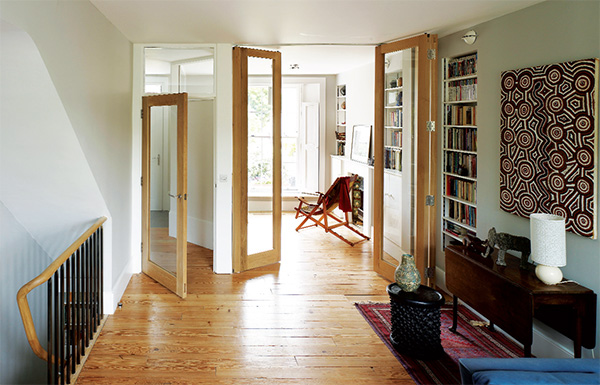 Builder Dave Manby agrees airtightness was the biggest challenge. Blogging about the build, he wrote: “If you go near the airtightness line with a tool - think! Of all the things I have learnt during this build, this is the most important.”

Near the end of the build, the team were trying to get the result down from 1.3 to one, and it appeared the airtight windows were leaking a little.

Manby says: “We cleaned the seals and wiped down the joins and when we re-pressured the building the reading was slightly worse! Removing general London grime had reduced their airtightness.” He thought plastering would get the house over the line, but it didn’t.

He also adds: “Us builders are going to talk more and more about temperature gradients and dew points to clients as insulation levels increaseIf the education is not there in several years time we are going to have problems.”

To cut down thermal bridging as much as possible, the team studied the house in 3D before work began to identify thermal bridges. This was crucial, as Cohen had decided to install a very minimal heating system — and to rely mainly on the building fabric for warmth.

“We were going to live with the consequences of any failings of the design in terms of low temperatures,” he says.

He did install a new modulating Ecotec gas boiler, with output between 4.9 and 12kW, but this only supplies hot water, underfloor heating in the kitchen — supplied by Continental Underfloor Heating — and a bathroom radiator. Not installing a full central heating system was a leap of faith.

“As a building physicist that’s what I wanted to test. The theory said it would work, and we never quite know if the theory is going to work out in practice.”

So how did it turn out? “We put on an extra jumper if it gets very cold outside, or we retreat to the kitchen where there is underfloor heating. But essentially the house is very comfortable,” he says.

Architect Robert Prewett reckons the house could do with one more radiator on the upper ground floor, where there’s a large sash window —just for the very coldest days of the year. But by all accounts the house is warm and comfortable.

Heating demand is within 10% of what was predicted. At the outset Cohen envisaged a 40 or 50 year payback, but as energy prices have risen this has dropped to 25 or 30 years.

Due to very low energy use and the feed-in tariff from the small PV system, his household energy costs are “around zero”.

The PV system consists of six Sharp 220 watt PV modules, giving a total system size of 1.32kW. According to Jonathan Bates of Photon Energy — who supplied the system — it should produce 1,180kWh and displace 650kg of CO2 per year.

The renovation cut the house’s carbon emissions by four fifths, leading its architect to dub it the 80% House.

But the attention to sustainability here goes beyond direct energy savings: there’s the green roof, kitchen furniture made from old floorboards, a counter made from recycled glass, low water toilets, reclaimed pitch pine flooring, and more.

But for the homeowners, perhaps the most important thing is comfort. “The benefits of what we’ve done are very much in making a nice place to live in. That is paramount,” Robert Cohen says. “And we think that that’s been achieved.”

Measured electricity consumption 2011: 13 kWh/m2 (of which only 3 kWh/m2 was imported from the grid)

Front wall: timber joists removed from front wall prior to internal wall insulation. These rehung on new steel spanning party walls. Lots of other one off details at junctions.

Front windows bespoke joinery with real timber astragals and slim double glazing (6mm cavity filled with argon and with warm edge spacer). U-value not verified but assumed to be approximately 2.0.