Some buildings are beyond saving, such as a south Dublin cottage which had to be knocked to deliver the first phase of a sleek new low energy home.

For one family, building a low energy home in the hills of south Dublin proved to be a bit more of a rollercoaster than they anticipated. In 2010 Nick Burrett and Orla O’Shea bought a Victorian cottage in Stepaside, Co Dubin with the intention of renovating it a year or so down the line.

“When we bought it, it was in a terrible condition anyway, we knew we had to do work on it,” Nick says. Both the roof and back wall were in danger of collapse.

They planned to renovate the cottage and build a large extension in one go. Architect Hugh Geoghegan’s practice Archi-i was appointed to design the project, with Dublin-based Bourke Builders as contractor

“The build quality was terrible – it allowed for massive heat losses and rodent infestation,” Hugh says. And the team weren’t long on site when they got a big shock. “We were three weeks into work on site when it became clear that the fabric of the existing dwelling could not be salvaged.” 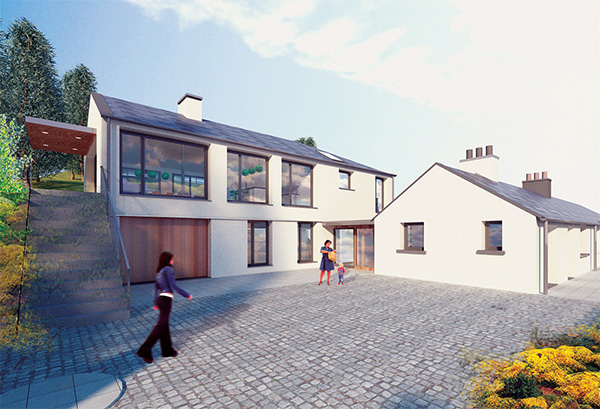 The existing structure was infected with dry rot and mould, and there was substantial water damage. Pipes had frozen and cracked while Nick and Orla were away, soaking the roof timbers. The level of damage caused by water ingress only become obvious once the builders started pulling apart the old cottage.

They decided to knock the original structure and build a new cottage instead. “There was a lot of on-the-hoof design, it was quite challenging,” says Hugh. On the positive side, it gave Orla and Nick a chance to build a new, energy efficient home

What’s more, the clients had more difficulty getting a mortgage than they expected. They put plans for the extension on hold and opted to finance the rebuilding of the cottage out of their own cash reserves.

The site is also on a granite hill, and the team worried they would end up having to excavate a big chunk of granite — potentially another big cost. But they wouldn’t know until the diggers were on site. Pushing the extension back and focusing on the cottage first would help to keep those groundwork costs under control should they arise.

The external walls of the new cottage are concrete block insulated

Munster Joinery triple-glazed Future Proof Passiv timber-alculad windows were installed through the property, and there are triple-glazed Velux roof windows too.

The airtight layer is provided by plaster on the block walls, and by Pro Clima membranes and tapes — supplied by Ecological Building Systems — in the roof. The final airtightness test, performed by Gavin O Sé of Greenbuild, produced a result of 1.95 air changes per hour. Greenbuild also assessed the house under the Code for Sustainable Homes, and it came in at level four.

There’s no whole-house ventilation system, only standalone extract vents in individual rooms, but the house has been built to take HRV ducting which will be installed when work on the extension begins — though Nick now says he wishes they’d installed it up front.

Of course Nick and Orla’s goals went beyond energy: they wanted the house to fit into the local landscape, and to avail of the site’s views over Dublin Bay. The original cottage was on a low point of their site, and the view was blocked by a hedge.

The new design opens up the view, and makes more use of the surrounding site. 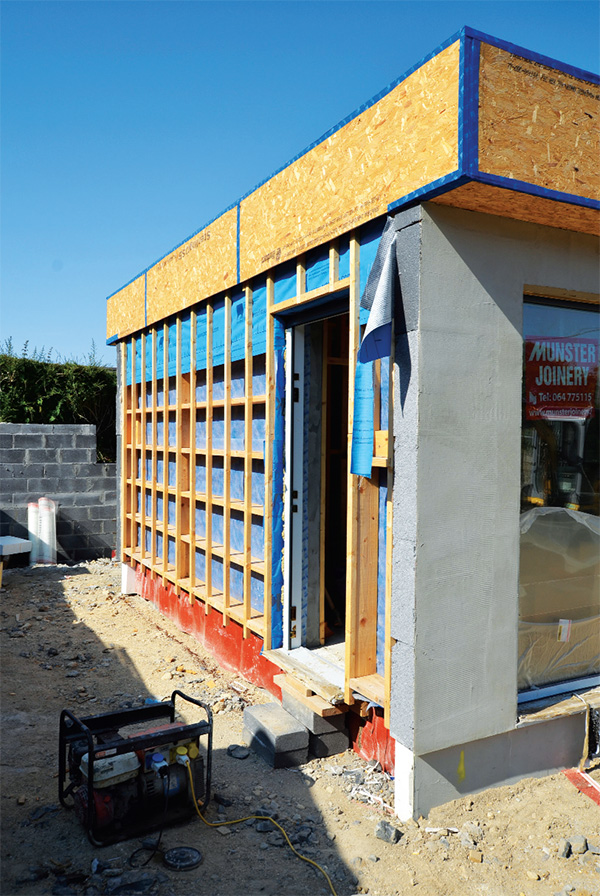 “The project threw everything at the client and they dealt with adversity with character and good humour,” says Hugh. He adds: “I take my hat off to Neil Skelly, our quantity surveyor. A cool head was needed at times and he provided that.”

Ironically, the team ended up finding no solid granite. But Nick thinks that ultimately, not being able to do the whole extension at the same time was a blessing in disguise. “I think if we’d have done it all in one go like we were going to, we’d have had a big problem financing it in the end.”

Nick and Orla moved in last October, and have been impressed with how the house has performed over the winter.

“There’s very little temperature drop throughout the night so it’s quite comfortable to just sit around in the early hours of morning, which we have been doing because we have a young baby. Heat retention has been very good.”

“I realised that it’s better to invest the money in insulation and doing it to a high specification, because it saves a fortune in the long run really.”

They’ve only used up about a quarter of their 600 litre oil tank since October, whereas previously they’d have gone through a 1,000 litre tank every six to eight weeks.

Nick expects detailed design of the extension to begin in the autumn — considering it will be almost four times the size of the cottage, the energy efficiency goals will be higher there.

“We’ve rebuilt a cottage and have an understanding of the materials used in the construction and their performance,” Nick says. “We have an energy efficient home and a much clearer idea of how to improve things for the construction of the larger extension.”

Ventilation: no whole-house ventilation system. Reliant on extract fans to individual rooms, plus infiltration, chimney and opening of windows. MVHR to be retrofitted as part of phase two.