Sustainability centre with a passive message

One of the UK’s first nondomestic buildings to gain passive house certification, the Simmonds Mills designed Green Base centre is an embodiment of the environmental ethos it seeks to promote.

A central factor in the success of the Green Base project in St Helens, Merseyside was the fact that the client bought into the passive house idea at a very early stage.

Simmonds Mills Architects tendered for the job just after they had completed the Centre for Disability Studies, a building in Essex that achieved passive house certification. During the selection process in Merseyside, the architect brought the client down to the centre to view the passive house approach in action.

Explaining passive principles while actually in a passive building makes that message so much more powerful. “They immediately saw those high levels of daylighting,” says architect Andy Simmonds. “They saw the sunny spaces. They sensed the air quality and then the thermal comfort.”

Simmonds – the current CEO of the UK sustainable building association the AECB and co-founder of the Passivhaus Trust – also gave a presentation on his own home, Grove Cottage, the first building in the UK to be certified to the Passive House Institute’s retrofit standard, Enerphit. “The clients really liked the presentation as it was relevant to a new building in the middle of a housing estate,” he says. Given that the same energy saving principles apply to passive house and Enerphit projects, the client was taken with the idea that it’s new nondomestic building might point to what’s possible with a retrofit. 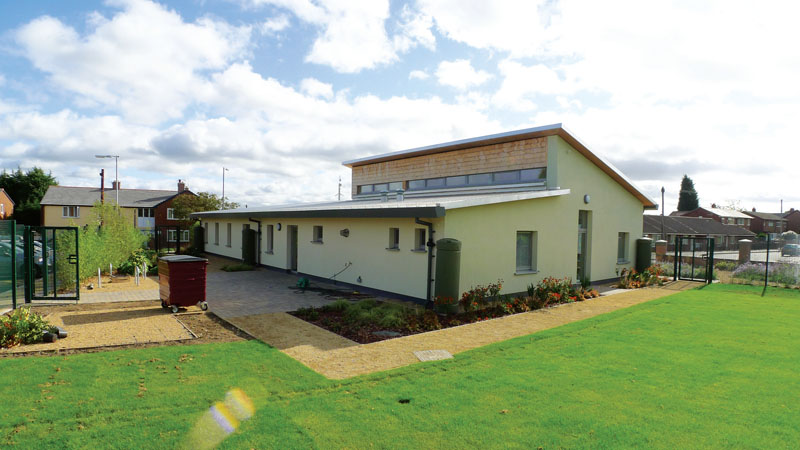 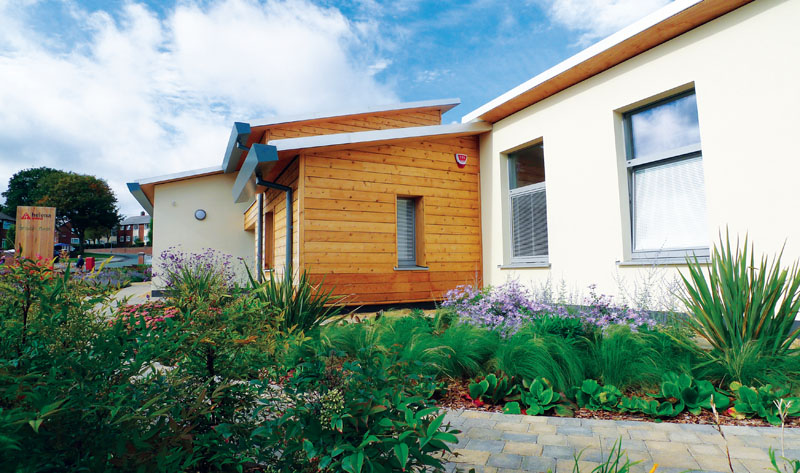 The client, Helena Homes, is a housing association and registered charity. Liz Ackerley of the association explains the need for a new building arose when it was decided to bring the organisation’s landscape maintenance services in house, with the aim of promoting horticulture and sustainability in the local community. At their 13,000 household Queensland Estate in Thatto Heath, the company set out to create a building that would harness this ambition.

The site chosen was in an area which Ackerley terms ‘backlands’ – a landlocked site surrounded by houses which had become a dumping ground. The idea was to transform the site into community gardens, where various horticultural projects could be showcased. The building at its centre would provide office accommodation for Helena Homes’ Green Space Service, and an information centre for the local community.

“We wanted to link into the green agenda in the context of the building itself,” says Ackerley. “What we didn’t want was a bells and whistles approach where we had a bit of this and a bit of that and a bit of the other. We didn’t want a high-tech building, but one which would demonstrate sustainable principles, something that wouldn’t guzzle a lot of energy. Passive house was the obvious choice.”

The focus wasn’t simply on energy conservation. The building also had to address the landscape in which it sat in a way which reflected the broader aims of the project. “They wanted us to come up with a way that a building might fit in and integrate with Helena’s imaginative edible landscape concepts,” says Andy Simmonds. “We were asked to propose ideas about how the building created a variety of external spaces with different orientations, so we paid close attention to the way the building and pedestrian movement on site related to the street, the more private areas and the existing pathways through the backlands – suggesting these should be ‘green’ corridors.”

Passive building principles always favour tight, non-dispersed footprints simply because they’re easier to heat, but meeting the needs of the Green Space Service called for a building that wasn’t that straight-forward. In addition to ensuring that the building addressed the external landscape in a particular way, the design team also had to allow for the possibility of extensions in the future.

Passive house specialist M&E consultant Alan Clarke explains that at this stage the design process became a circular one. The architects came up with a concept, Clarke modelled it on the passive house software PHPP, and if it wasn’t hitting the targets he reverted with suggestions about how it might be changed.

“In this case, with a single-storey small building, it was a case of first of all seeing what we could do about reducing the external area,” says Clarke. “We used PHPP to work out the external area to floor area ratios.” He adds that though the initial model included the same U-values as the Essex project, a combination of fenestration, overall size and climate data kept putting it just out of range of passive targets.

Andy Simmonds says that at this stage, there’s frequently a ‘nervous dynamic’ within the design team. You want to make maximum use of the leeway passive house gives you, but you don’t want to jeopardise certification by straying over those strict limits.

Once it hit construction phase, the project became detail-oriented. At the time, Simmonds was refurbishing his own home to the Enerphit standard. Building on the experience gained here and during the Essex job, the design team were able to re-use tried and tested details to address thermal bridging and airtightness issues.

A shipping error resulted in shallower I-beams being delivered to site than the intended depth of 450mm. In order to keep to schedule and retain the right U-values, the design team found a solution in specifying a high performance foam instead of the mineral fibre that had originally been envisaged. “This caused consternation in our office because the foam had very high global warming potential,” says Simmonds. “We’ve always tried to avoid chemically complex insulants where we don’t need to. And we were very reluctant to be a practice that now suddenly had to start using them.” 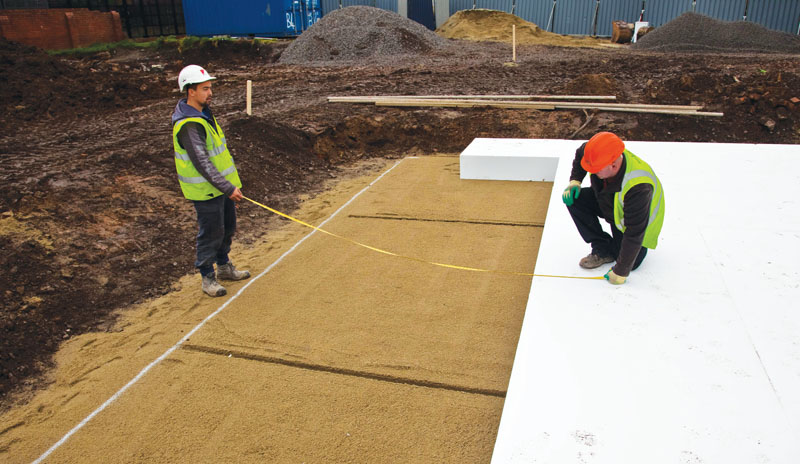 The raft foundation is insulated with 250mm EPS

But because the alternative would have involved disposing with the shallower I-beams – which were custom manufactured for the lengths and shapes needed for Green Base – arguably the foam became the most environmentally friendly fix. Several of the details now had to be reworked to ensure that airtightness targets were met without introducing thermal bridges. To avoid too many different insulation installers on site the decision was made to insulate the Larsen truss walls – which were previously specified with Perimeter Plus insulation too – with the foam as well as the roof structure.

Airtightness was achieved primarily through what Simmonds describes as ‘robust’ methods: a combination of internal plastering, tapes and mechanically clamped airtightness membranes, together with the aforementioned PU foam in the ceiling. Some issues arose when cabling was accidentally rerouted through the wrong area, but remedial action prevented it from compromising the passive house standard’s air change target.

Though main contactor Paragon Construction had previously built to levels four and five of the UK’s Code for Sustainable Homes, Green Base was the company’s first passive house project. “It was quite untracked territory for an English contractor,” says Paragon MD Paul Barrow. “Because it’s a partnered scheme with a local housing association it allowed the contracts to be conducted in a very hands on way with a collective buy in from the client, the architects and ourselves.” Barrow says that in some regards the build “was pretty in keeping with the type of stuff we do – Grand Design type properties. The in-house build team we have are used to working to high quality levels.”

The build process itself was fairly straightforward, though Barrow stresses that heavy emphasis was placed on maintaining the airtightness throughout the scheme. Paragon’s mechanical and electrical subdivisions installed the building services, enabling tighter control to ensure the trades paid attention to the airtight layer. “It just lent itself well to a passive house level of build, given the emphasis that’s required on airtightness,” says Barrow. “Before we even set foot on site we had numerous workshops to educate our site team about what passive house meant, what it would entail and to get full buy in from everyone. That really paid dividends on site.” A first airtightness test before the walls were plastered internally came in at 1 air change per hour. “We made sure before we plastered that all the junctions were taped to be absolutely airtight,” he says. A second test after plastering gave a result of 0.44 ACH.

Citing former UK Energy Secretary Chris Huhne’s speech at the 2010 UK Passivhaus Conference, Barrow says that Paragon see a future in passive house. “It’s how things should be done in terms of sustainable build quality,” he says, adding that the company has developed designs for passive house within budgets for affordable housing schemes. “We’re actively trying to get clients to consider passive house, whether it’s housing, commercial or anything else for that matter.”

Space and water heating is provided via a conventional combi gas boiler, together with conventional radiators. “You give that to a plumber,” says Alan Clarke, “and he'll know what to do.”

Solar thermal water heating was considered, but given the fact that office buildings have low hot water requirements, it was decided that it wouldn’t be an appropriate investment. Ventilation comes via two separate Paul MVHR units. Again, simplicity was the watchword. Clarke explains that two separate systems were chosen to avoid any customised control design.

“We steered very strongly away from air heating partly because we see the ventilation as running during the day time when loads are high. On the other hand, from Friday to Monday, while you may still need to put heat into the building, you only need a tick over of ventilation.”

In its first year of occupancy, measured energy usage is actually coming in below forecast values. Liz Ackerley says that while the building is simply working well, the occupants are highly motivated and tend to watch their energy use.

“We have a number of other buildings in the association. At our head office, you’re either too hot or too cold. That doesn’t tend to happen here. You don’t get draughts and the air is really high quality. We have hot desks here, and we’re finding a lot of people tend to come here to use them. The whole space has quite a calm sort of atmosphere.”