A new research centre in Northern Ireland could stake a claim as being one of the greenest buildings on these islands. Not only is it passive, it boasts a whole suite of ecological features, and aims to be at the cutting edge in the research and development of new sustainable and renewable technologies.

The Crest Pavilion which now forms part of the South West College campus in Enniskillen wears its sustainable credentials on its sleeve. It’s the first building in the UK to meet three separate sustainable standards: passive house certification is pending, as is Breeam Excellent accreditation, while the building has also been designed to be net carbon neutral in terms of “regulated” energy use – including energy used for heating, ventilation, lighting, etc., but excluding “unregulated” energy use by occupants for cooking and operating electric appliances.

The ambition that drove the project towards these standards was written into the building's DNA. Crest, the Centre for Renewable Energy and Sustainable Technologies, is a research facility designed to foster innovation in these fields. 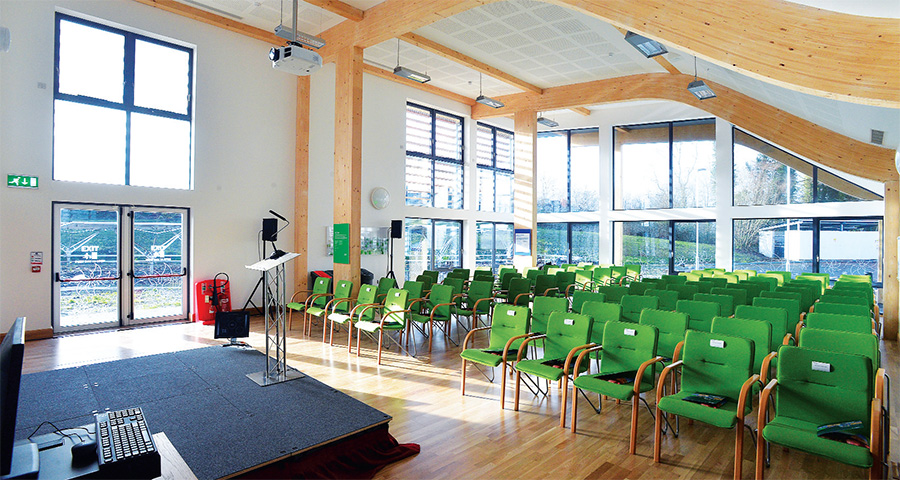 Funded by the EU together with the UK and Irish governments, the facility is available to both businesses and individuals within Northern Ireland, the border counties of Ireland, and western Scotland, who have ideas for relevant products or process developments but don’t have the physical or technical capacity to develop or commercialise them. The centre includes lab space, testing equipment and demonstration technologies, while technical staff are also available to help bring ideas to the next stage of development.

The centre also functions as a living demonstration of itself. It’s a showcase of the sustainable building methodologies and renewable technologies which it embodies. In the words of architect Paul McAlister: “The building itself is the story of sustainability.”

McAlister was Northern Ireland’s first passive house designer. Two years ago, after completing a new passive build in Co Down, he published detailed costings for the project, which demonstrated just how cost-effective passive house had become in Northern Ireland. The meticulous attention to detail that delivered that project was also brought to bear on this project, where the tender process put cost ahead of all other considerations. 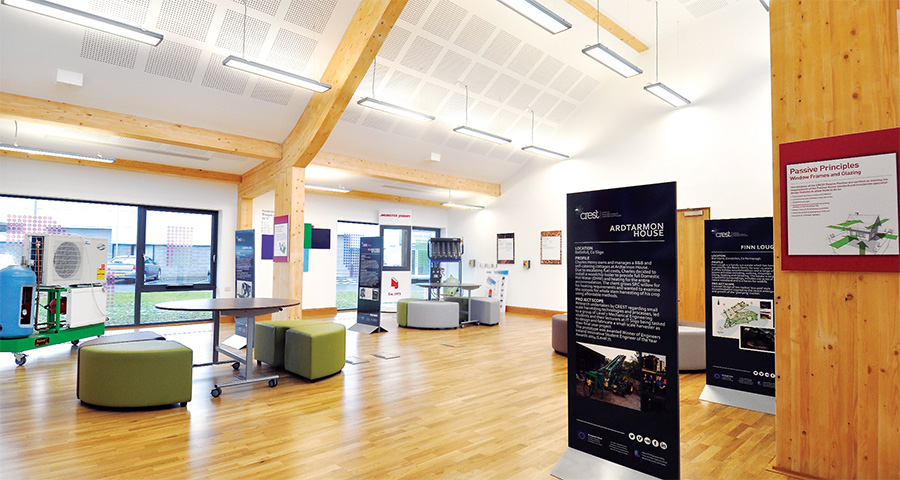 The project team was presented with a brownfield site, overlooked by a large wind turbine. There was, however, sufficient space and latitude to orient the building towards the south to optimise passive solar gains, and still create links between existing college buildings.

“Form always follows function,” says McAlister, explaining that the large lecture room the pavilion required was sited at the southern elevation, which is extensively glazed and dominated by a large overhang and an extensive louvered section to prevent summer overheating. “We also have high level glazing in the exhibition spaces, which has the advantage of bringing in passive solar gain when we need it, in the spring, autumn and winter. Again, the form of the building responds to the need for both passive solar gain and light. We’re ticking both boxes.”

Both bathrooms and plant room are sited on the northern elevation, where glazing is minimised. The plant room was deliberately oversized, specifically to facilitate easier access and give visitors the space to view the renewable technologies incorporated in the building.

“You can probably fit about half a dozen people in there comfortably,” says Crest manager, Tim Stokes. “You can go right around the heat recovery system, you’ve got the air source heat pump, the rainwater harvesting controls, the building management system (BMS) in there. And outside on the wall, we’ve got diagrams showing how the systems work.”

Stokes explains that a screen is to be installed in the reception area which will show the building’s energy usage and production stats in real time. “Once you’ve sealed up the walls, it makes it difficult for people to see exactly what’s gone on in there,” he says, “whereas we’ve made an effort to help people to interpret the building and show them how it works.”

Building to the passive house standard meant a super-insulated structure. Meanwhile Breeam, and its emphasis on using low embodied energy materials, led the design team away from steel and towards timber. Structural insulated panels — made up of polyurethane insulation sandwiched between OSB boards — were chosen for walls and roof. The factory-built panels made for fast, precise onsite assembly. Preformed openings for windows and doors cut down on waste and sped up construction. Each element is constructed on the ground and then lifted into place by crane.

The glulam timber framing system was chosen for several reasons, says architect Paul McAlister: low embodied energy, the fact that the timber came from sustainable sources, and efficient assembly. But it wasn’t simply about function. “The timber structure of the pavilion is expressed in the internal spaces as part of the aesthetic of the scheme, and creates an elegant interior space.” 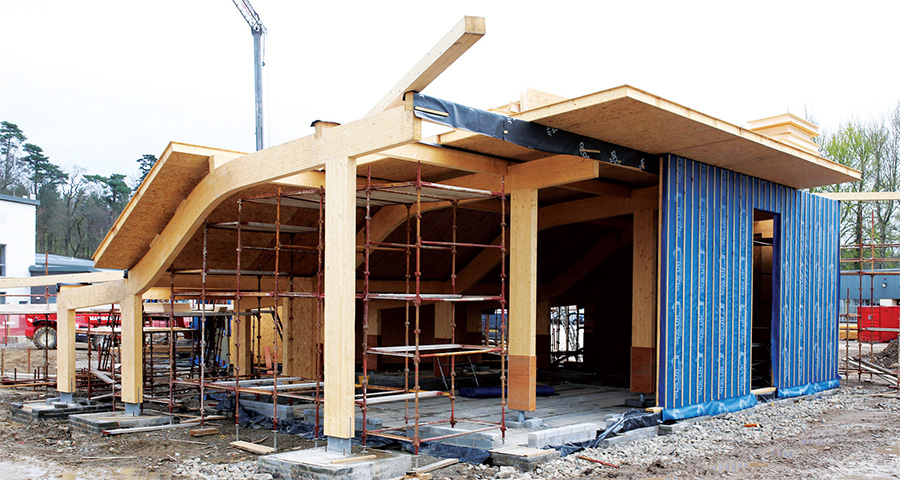 The building was constructed from a factory-built timber frame system insulated with polyurethane, with a Quinn Lite subfloor, while the ground floor features 250mm of Kingspan TF70 insulation under the concrete screed

A thermal model of the building was created early in the project, allowing the design to be tested and modified to make sure it would meet the desired passive house target space heating demand of 15kWh/m2 per annum. McAlister explains that while simultaneously chasing three separate sustainability criteria added to the complexity of the build, there were obvious synergies too.

“The carbon neutral target helped a lot with the Breeam points,” he says. “We got almost all of the available points for energy. We had an extremely efficient building, and one that was generating all of its own electricity for lighting and heating, so from that point of view, it made our job of getting Breeam Excellent a lot easier.”

“Passive house and carbon neutral are a very good fit. You have a very efficient building, so you need fewer renewables to get it carbon neutral.”

Airtightness, is of course, one of the pillars of passive building. Achieving the passive target of 0.6 air changes per hour required a great deal of extended effort on the part of the contractor, PJ Treacy & Sons. Sean McCarron was Treacy’s man onsite. “Maybe the best thing to say is that it was a learning curve for all concerned... but we did achieve the target in the end.” McCarron explains that airtightness was delivered primarily using a combination of airtightness membrane and tapes.

The building’s timber walls are constructed on thermal block sub walls, with perimeter insulation around the inside of the external walls to help eliminate cold bridging. The connections between the structural insulated panels are formed using expanding glue and screw fixings to ensure a thermally continuous joint. In addition, a 20mm shadow gap was created between the vertical glulam columns in the main demonstration area. This allows visitors to see the timber structure as a structural element separate to the walls. 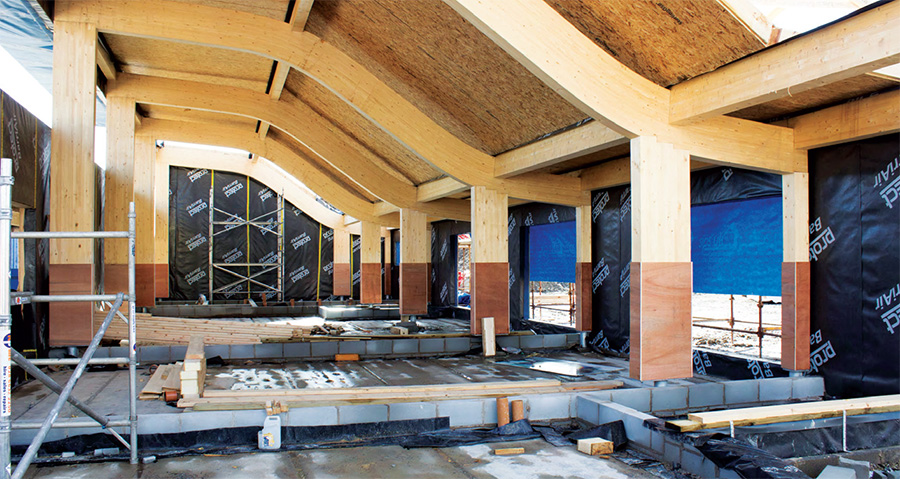 Cold bridging is always a major issue at the junctions between existing structures and the buildings. No such problems arose in Enniskillen however. “The link,” McAlister explains, “is an external walkway, which is a thermally broken element of the build, which means no cold bridging issues arise. The pavilion is entirely standalone. In all, the design team created 56 A1 drawings which detailed away cold bridges from the myriad of internal junctions.

Sean MacDiarmada of Cuilinn Engineering was the M&E engineer on the build. He explains that because of occupancy profiles, building control regulations require more exacting ventilation standards on a commercial building than would be required with a typical dwelling house. Passive house and Breeam targets however meant that achieving those standards couldn’t be done using conventional air conditioning systems, which use a lot of refrigerant — and a lot of energy. Instead, the design team specified a combination of mechanical heat recovery ventilation (MVHR) and a natural ventilation strategy.

An external weather station feeds data to the building management system. “Whenever conditions are favourable,” MacDiarmada explains, “when it’s not freezing cold or bucketing rain or the wind-speeds aren’t huge, the BMS will shut down the MVHR and automatically open up windows to ventilate the building naturally.” This way, you get rapid ventilation and free cooling without the need for fans. In addition, temperature, CO2 and humidity sensors located around the building trigger vent opening as required.

Between Breeam, passive house, budgetary constraints and building control regulations, getting the ventilation and cooling strategy right was, in MacDiarmada’s words, “exceedingly difficult”. Nor did it help that the building was largely open plan, and that there were no ceiling voids to house ducting systems. MacDiarmada made extensive use of modelling software at design stage to work out the optimal design for the system. “That was a particular challenge,” he says, “working within the restriction of passive house and Breeam, but yet making the building work as a commercial building.”

Breeam also drove the selection of a wide range of low-embodied energy materials in the build: zinc for the roof, cedar cladding on external walls, and the aforementioned timber frame. All lighting is LED, while rainwater collected from the roof is used to flush the toilets, reducing the potable water requirement. Water reduction technologies are also in use throughout the building. 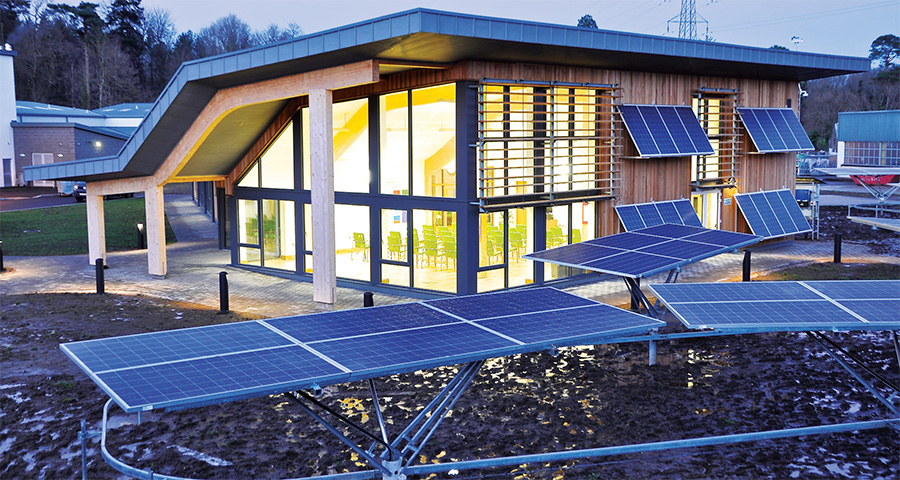 One of the showcase renewable technologies on display is the robotic solar tracker, the first of its kind in Europe. Solar PV panels are mounted on a motorised frame which tracks the movements of the sun throughout the day, optimising the efficiency of the system, and bringing the building a long way towards its carbon neutral target.

Crest manager Tim Stokes says that initial reactions to the building — occupied now since January — have been very positive. So far, the pavilion has attracted a range of research and demonstration projects: “We’ve got things like an air source heat pump rig — a working rig suitable for teaching students and for demonstrating to businesses as well. We’ve also got a solar hot water installation and a hydropower demonstration system.”

“The building has a wonderful feel to it”, he goes on, “the exposed timber and the high ceilings give it a warm, open feel. The first comment you always get is: ‘This is lovely.’”