The beautiful and unspoilt North Norfolk coast provides a haven for visitors, not just in the Passive fishermen’s cottages on Norfolk coast summer months when the population swells dramatically, but also out of season for those seeking a tranquil idyll or perhaps enjoying the ornithological diversity that the area provides. This in turn has led to a thriving second home community, which has had the unfortunate effect of making affordable housing for local people very difficult to find. It was this background that led Hastoe Housing Association, in conjunction with the parish council, to bring forward a scheme for much needed local affordable housing in 2007.

A suitable site was provided by the local parochial church council on the western edge of the village on the main approach road into the settlement. 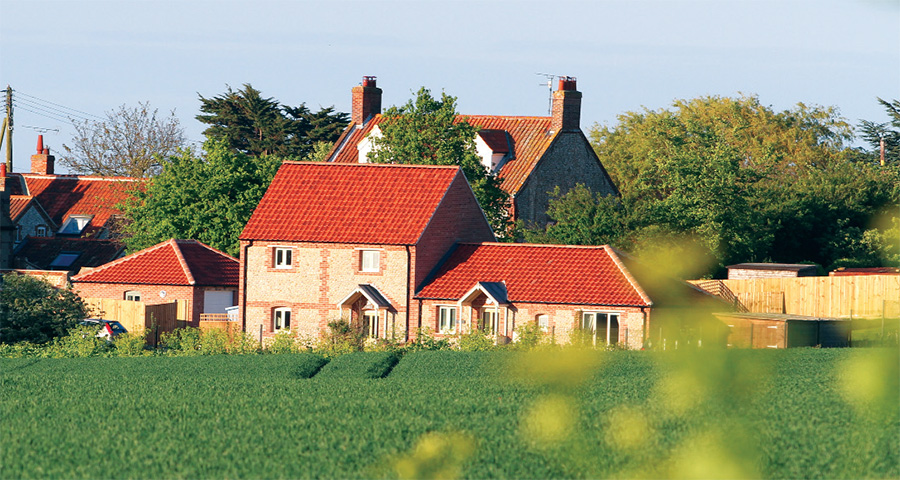 Being in a designated Area of Outstanding Natural Beauty and within a local conservation area meant that the design quality of the scheme had to be exemplary. A context study and careful consideration of local materials drove a scheme that also needed to take account of views into and out of the settlement. Planning consent was eventually granted in 2009 although legal matters prevented the scheme from getting underway until 2013.

By then Hastoe Housing were specialists in the delivery of passive house, having delivered the award winning Wimbish affordable housing scheme in 2010 and the subsequent Ditchingham passive house scheme. So it was no surprise when instructions were received to develop the scheme to the passive house standard, despite the fact that planning had already been gained for something much less ambitious. Hastoe expound passive house mainly because it is highly effective at relieving fuel poverty, a huge problem in their sector. They also find that passive house delivers other advantages such as fewer void periods and less ongoing maintenance, while keeping operational energy and the resultant carbon emissions low.

As architects for all of Hastoe’s earlier passive house schemes, Parsons & Whittley were unfazed by the challenge, but the timescales required meant that planning amendments had to be kept to a minimum. We were fortunate to have a planning authority who understood passive house, and who were keen to work with us to deliver the scheme while maintaining the design quality. We had modelled the original scheme on the traditional vernacular of fishermen’s cottages, and those guys knew a thing or two about working with the elements. We already had a compact form and good south orientation, with very well sheltered, minimal north facing windows. 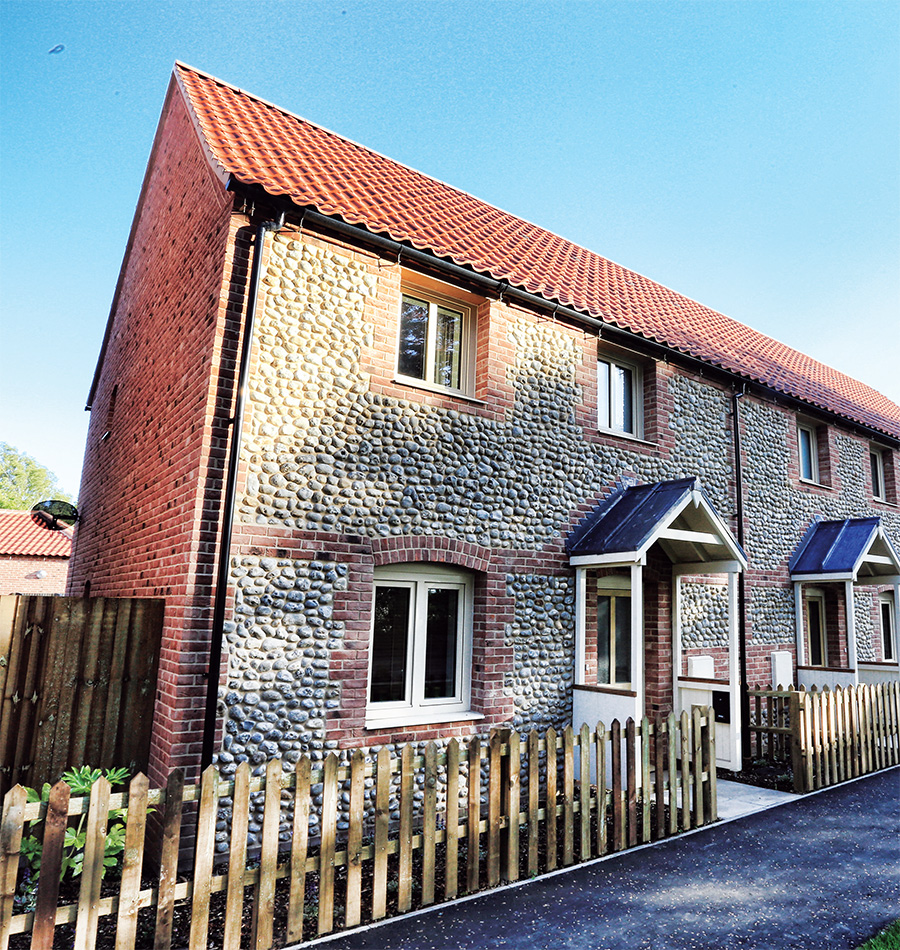 So the biggest challenge at Burnham Overy Staithe was to take a scheme that had considerable design constraints already imposed, that had not been designed as passive house, and deliver it to one of the most exacting energy efficiency standards.

First on the checklist was wall thickness. Taking the scheme from 300mm walls to 500mm grew the footprint. Similarly roof insulation and space for ductwork was always going to push the roof higher. The terraced homes had certain aspects in their favour though, such as the compact form (a terrace of three units will tend to have a good form factor, or area to volume ratio), the orientation, and the window arrangement, which needed almost no change. 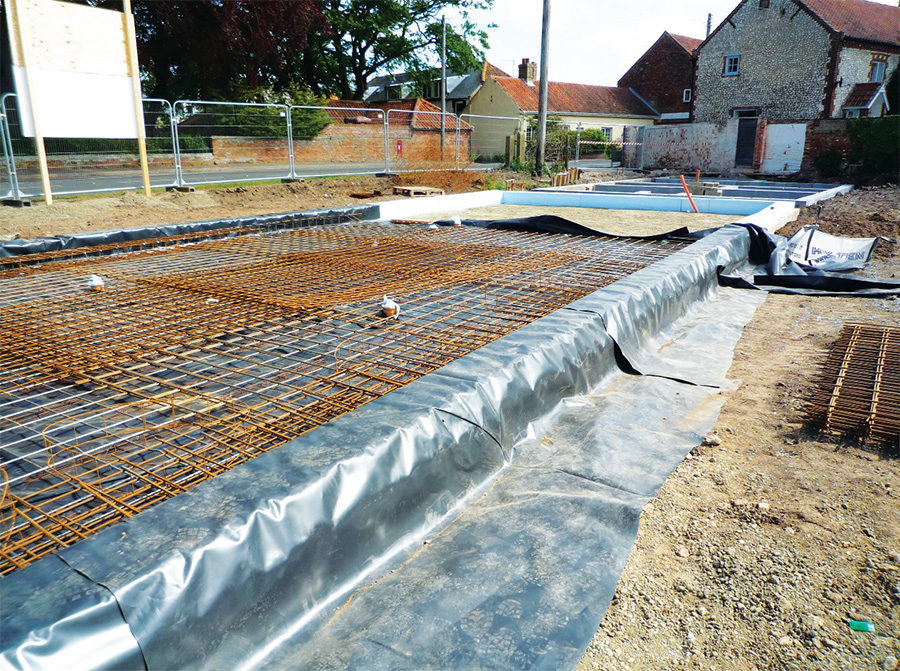 The raft foundation which was insulated with 400mm Styrofoam XPS insulation

The use of brick/flint faced walls under a clay pantile roof was fixed, and of course necessary given the sensitivity of the site, so cavities were expanded to take a full 300mm of insulation.

Despite its coastal location, the site is relatively well sheltered for a full cavity fill. The foundation became a raft type slab to accommodate additional insulation, although supporting a 200mm flint and block outer leaf without a thermal bridge led to some interesting discussions with the engineers, eventually resolved through the use of an independent strip footing supporting the outer leaf.

Interestingly, the additional wall thickness helped to bring the eaves height down despite raising the roof to accommodate the MVHR ductwork and service voids. The use of thinner PIR insulation at the eaves helped avoid the otherwise typical thermal bridge so often found at eaves details.

The thicker external skin, particularly where faced with local flint, helped to recess the windows to provide shade and a better thermal performance, while actually enhancing the definition of the fenestration. Segmental arches utilised precast concrete or self-supporting arches and the wider frame of the passive house windows kept this detail looking neat. Munster Joinery triple-glazed timber windows provided the necessary glazing performance while retaining a traditional appearance. 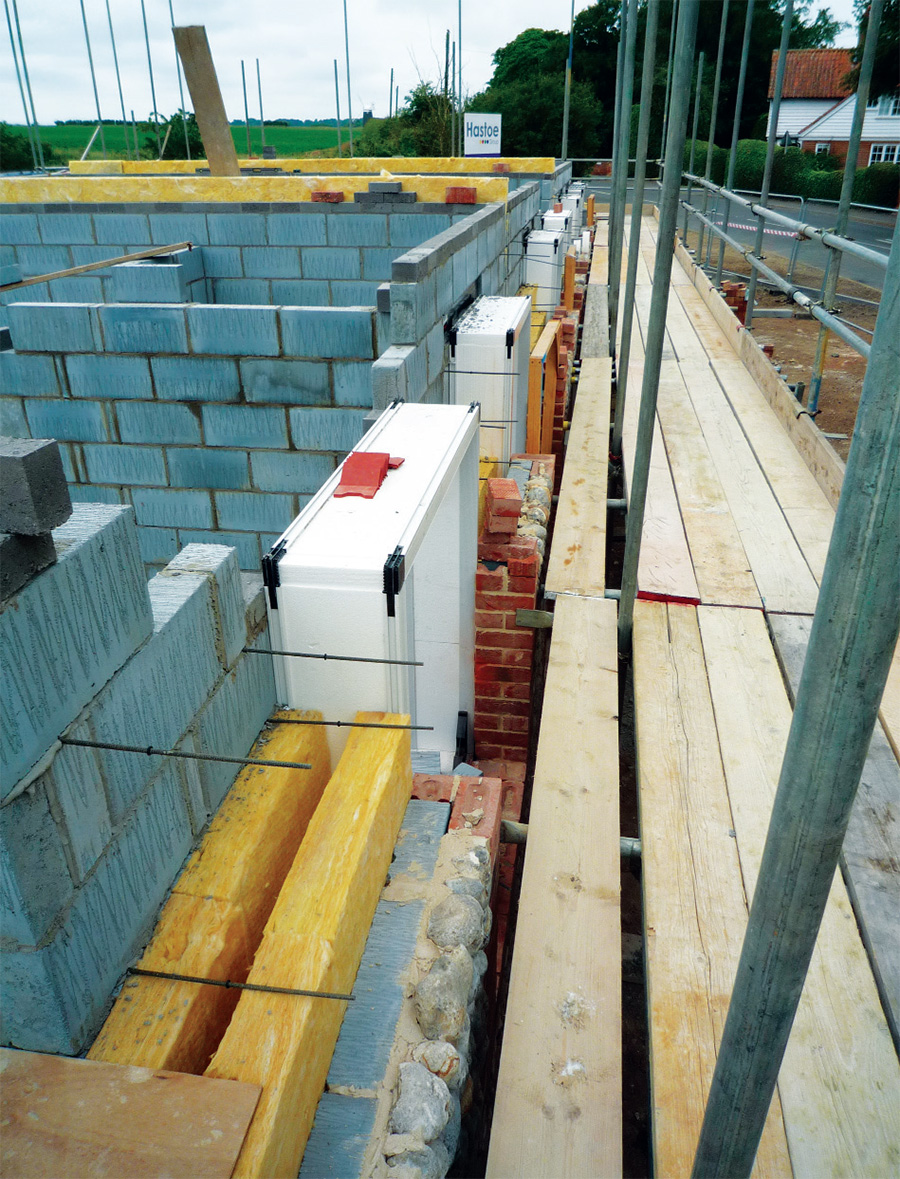 Taking the lead from the external finishes, the construction generally followed a masonry approach, for the advantages of thermal mass but also because the skills and materials are freely available. In addition, wet plaster provides an ideal airtightness membrane, leaving the consideration of this aspect down to just the critical junctions and the use of a membrane arrangement on the underside of the roof trusses.

Another limitation of the pre-fixed design centred on the space available for the mechanical infrastructure. Rural exception sites such as these rarely have ideal fuel supplies, and choices were limited in this case. Initially the scheme had been designed to consider community biomass, with a separate outbuilding on site to house the equipment. But fuel supply concerns and a more detailed consideration of carbon emissions from biofuels led to this being discounted. Eventually Genvex 185L compact units comprising an MVHR and exhaust air heat pump were chosen, giving the additional advantage of economy of space. They are positioned on the first floor of each house and the MVHR inlet and exhaust pass through the roof, with supply and extract fitting within a compact service void just below the trusses, or within the space of the metal web floor joists.

Normally a passive house might benefit from a deep roof overhang to provide summer shading, but once again the pre-fixed design prohibited this, so a cooling strategy was developed which included a sensible window opening allowance along with external blinds on the larger south facing glazed areas.

The project was tendered during the early summer of 2013 once the design was fully complete, (to RIBA work stage F), whereupon a local builder, EN Suiter, was successful and started work straight away. The contractor’s approach formed an essential part of the success of the scheme, with an openness and willingness to learn and consider the importance and sensitivity of elements that are normally taken for granted. The site quality demands of passive house were recognised and embraced, making the delivery of this exacting standard much easier. Coordination between design and site team continued throughout the build and ensured that milestones were passed without difficulty. The required airtightness of less than 0.6 air changes was achieved at the first attempt and the site was completed and ready to occupy in February 2014. 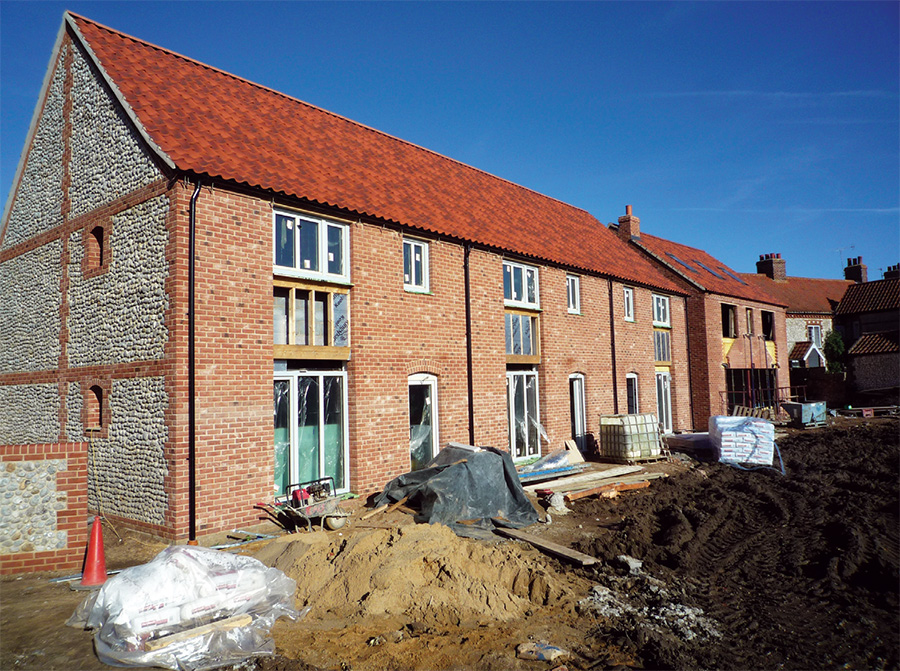 One of the lessons learned from Hastoe’s previous schemes is how to hand over something as innovative as passive housing to ensure that occupants get the most out of the dwellings. At Burnham Overy Staithe this was achieved through the production of a small and simple plain English operation guide included in the home owner’s manual. 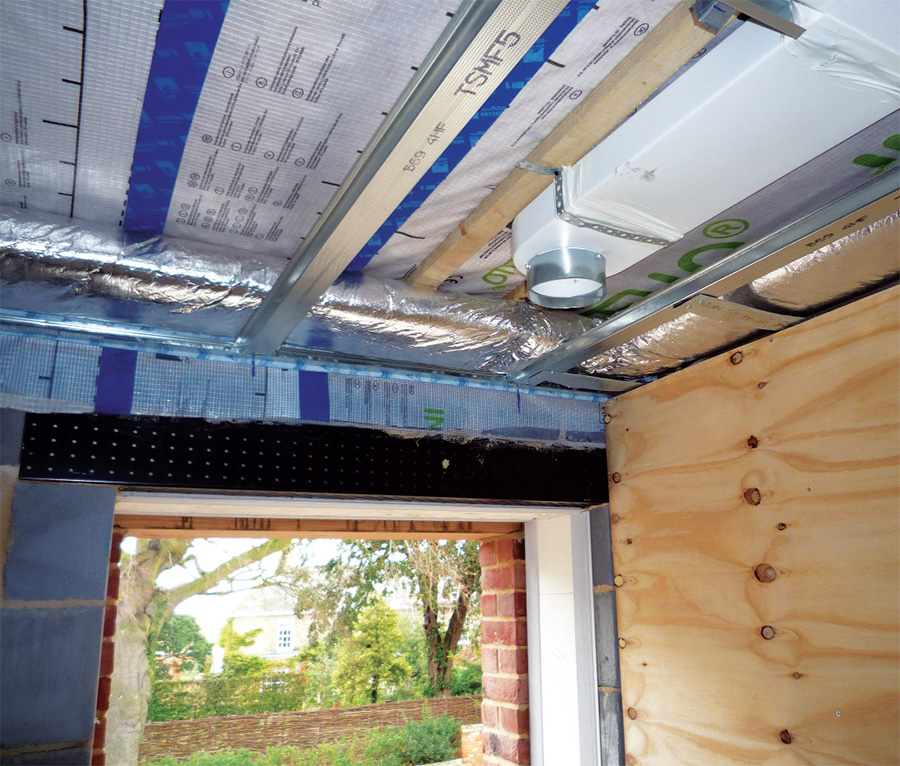 On move-in day the dwellings were set up and working so that the new occupants could concentrate on all the other stressful events that moving house entails. Then a couple of weeks after moving in, when the excitement of the move had subsided, Hastoe and the architects returned and spent an hour or so with each family taking them through the controls and the heating and cooling strategy. One of the most important aspects here is to ensure that occupants experience the controls themselves and get to play with them while experts are around to guide and assist. This process is then repeated at the change of season to ensure the differences between heating and cooling a passive house are well understood.

At the same time as the handover, monitors were installed with the occupants’ consent, to measure temperature, relative humidity and CO2. Early data shows that the houses are working to the passive house design intent, with space heating running at just under 9 W/m2. 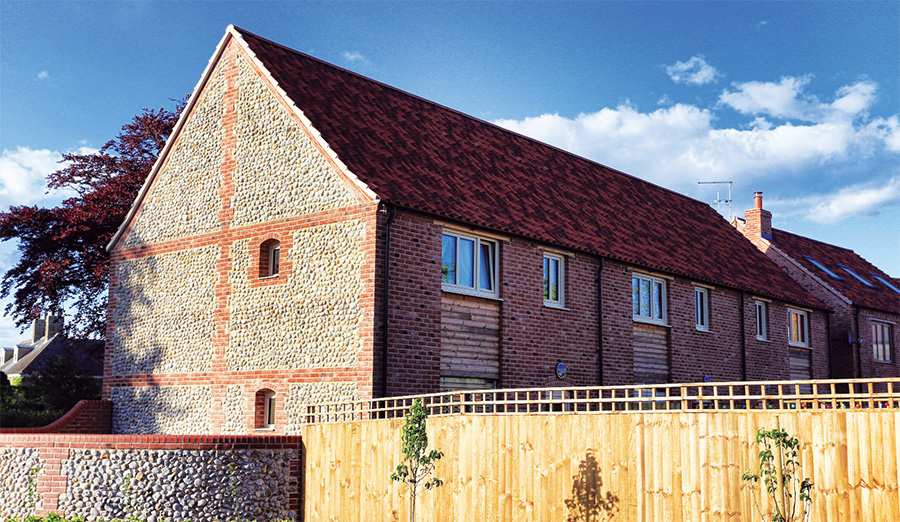 Passive house certification was obtained in June 2014. The overall cost of £1,745 per square metre includes the contractor’s overheads, significant external works and professional fees. The actual cost of the buildings themselves comes out at around £1,022 per square metre, which, given the additional material and design quality necessary in this location, represents a cost-effective delivery of the passive house standard.

The project has been well received by locals and passive house enthusiasts alike, and was this year’s winner in the UK Passivhaus Awards architectural design category. Most importantly, the Burnham Overy Staithe passive houses demonstrate that this most demanding of energy and comfort standards need not be compromised by architectural constraints and can be delivered in a wide range of traditional idioms.

Location: Burnham Overy Staithe, on the North Norfolk Coast, in an Area of Outstanding Natural Beauty

Other standards & awards: The houses also deliver against the Homes and Communities Agency’s housing quality indicators, while complying with the Joseph Rowntree Lifetime
Homes standard and achieving 14 points under CABE’s Building for Life standard.