This new home in Galway is inspired by local buildings but doesn’t look like anything else in the area, and delivers passive performance along with panoramic sea views.

Driving west from Galway City along the north shore of Galway Bay — through an area known locally as Cois Fharraige (meaning ‘beside the sea’) — one village blurs into the next in a blitz of bungalows that continues for more than 30km. This coastline contains some unfortunate examples of one-off rural architecture, dating from the 1960s right up until the boom.

Which is what makes this new barn-inspired passive house in Indreabhán by New Zealand-born, Galway-based architect Lester Naughton all the more special — it manages to be heavily inspired by the local vernacular yet unlike anything else in south Connemara. Put simply: there are plenty of barns out here, but this is the only one that’s a house.

I met Naughton, builder Niall Dolan of GreenTec Ecological Homes and homeowner Máire Aoibhinn Ní Ógáin at the house on a grey April day, as showers swept the west coast. For Naughton, the form of the house simply followed function — he wanted to raise the living spaces to make the most of its vista over Galway Bay, so a barrel-roof, inspired by the surrounding agricultural buildings, was an obvious design choice.

“Here in Connemara it’s quite a sensitive area, and you want to get up to get a view,” he says from the kitchen, as we look out over the patchwork of small fields to Galway Bay. “But If we made the same thing and put a pitched roof on it, it’d be a metre and a half or two metres higher.” 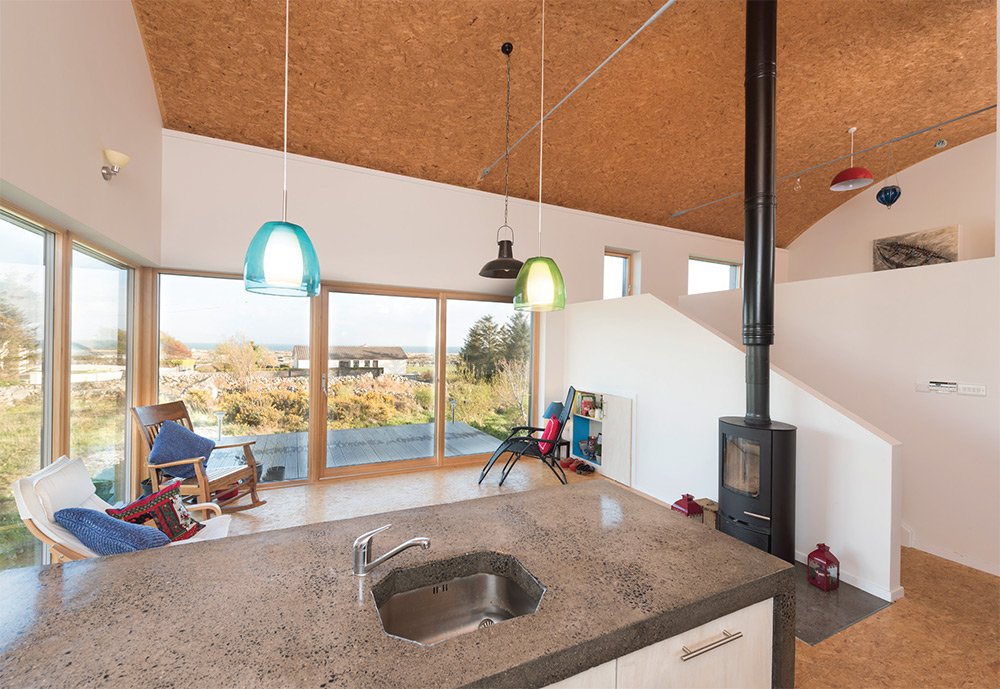 This would have made it difficult to get planning, and what’s more, Máire Aoibhinn wasn’t keen on a dormer with a pitched roof anyway. She had met Naughton at the Simon Open Door, an annual event at which architects give consultations to members of the public and then donate their fees to the Simon Community. Luckily for Naughton, she gave him the freedom to pursue his own vision for the house — and to build it to the passive house standard (while she was keen on a warm and energy efficient home, she didn’t insist on passive).

The project flew through planning. And in this sensitive landscape, it stands out for all the right reasons. It’s also deceptively small, with just 113 square metres of floor space. Downstairs, there are two bedrooms, a bathroom and a utility room. Upstairs, there’s the master bedroom, a bathroom and a small sitting room. And on a mid-level in between on the east side of the house, there’s a large height-and-a-half kitchen, overlooked by the first floor living area.

The kitchen extends right up to the roof, where a row of feature lighting sits in the gap between the white-painted walls and the vaulted OSB ceiling. “Passive wise that’s a compromise,” Lester says about the strip lights, laughing. ”That gap could have been filled with insulation.” 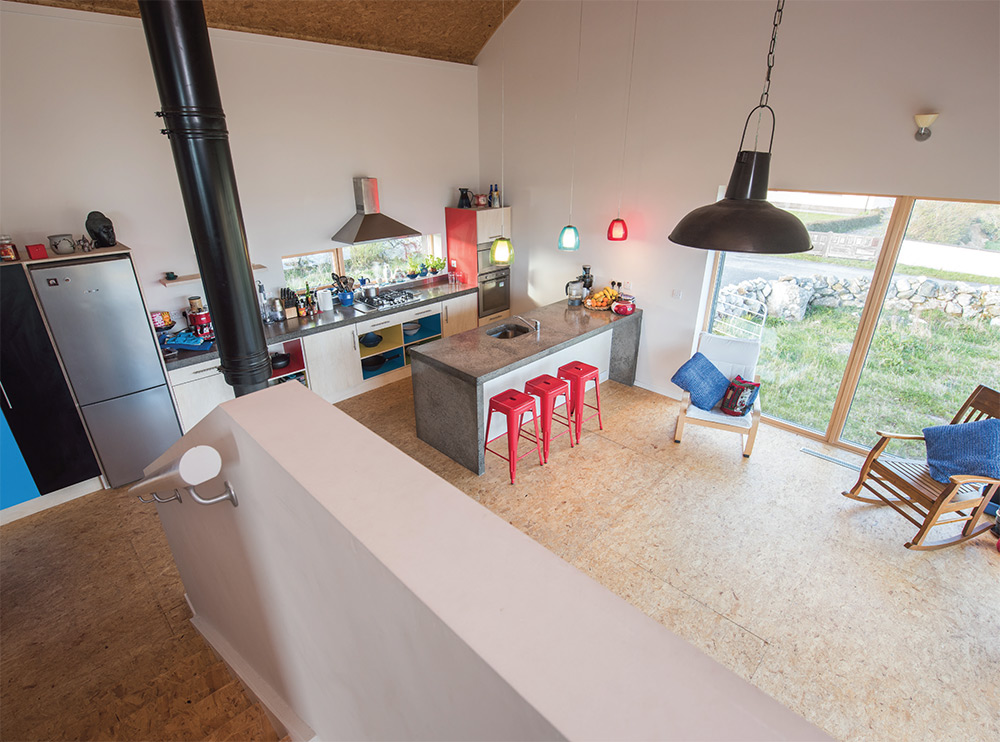 “It wasn’t even quite finished in February 2015, and I don’t know how many days I went out of the house in a t-shirt, and the car was frosted. It’s bizarre, it’s like a completely different climate”

Walking around the house, what’s immediately apparent is the intelligent floor plan — how cleverly the rooms fit together to maximise the efficiency of the internal space, which again sets it apart from your average sprawling boom-era bungalow. “It’s very easy to make it too big, or big and not efficient,” Lester says. “Every metre costs you the same, roughly. Why build a square metre you don’t need? That’s my take.” Máire Aoibhinn shared this belief too, and even sacrificed an en suite in the master bedroom to have more space.

From the kitchen, the large Nordan triple-glazed timber-aluminium doors face south across Galway Bay to the Burren. The doors open out onto a timber deck, with a ramp from this leading down into the back garden. This satisfied Naughton’s desire to raise the living spaces while keeping them connected to the garden. “There’s probably a bit too much window in terms of purely thermal [considerations],” he says, “but you’re not going to cut out the view.”

All that glazing poses a thermal challenge in two ways: it can let too much heat escape from the house in the winter, and let too much heat in during the summer, creating a risk of overheating. Naughton dealt with the first challenge by beefing up the insulation spec in the walls, adding rigid insulation boards to both the outside and inside of the timber frame. 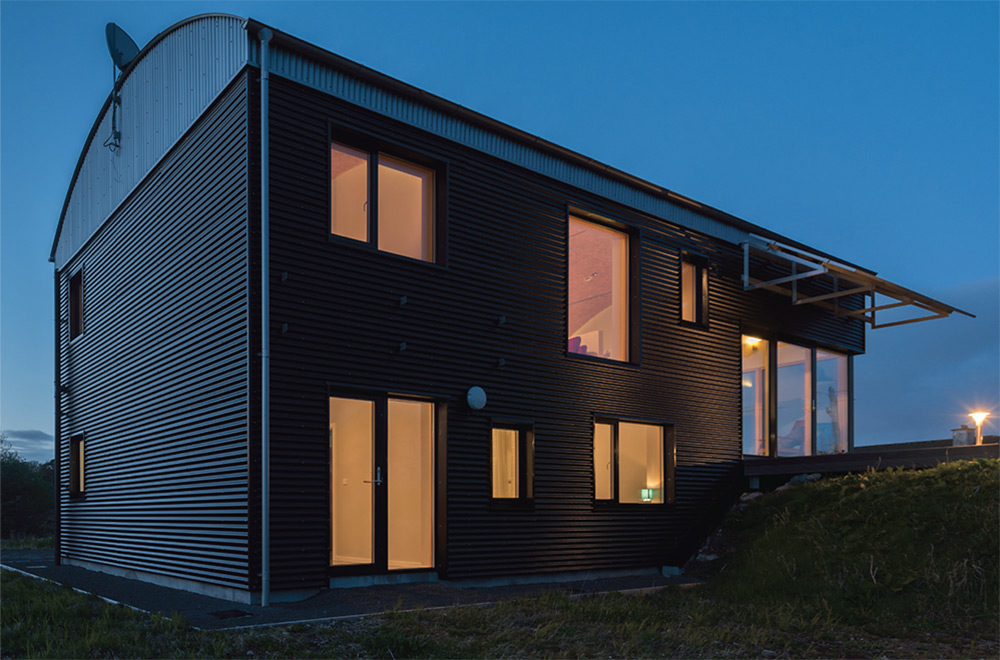 The threat of overheating posed a more complex challenge. “I’m more worried about new houses being too hot than too cold,” he says. According to PHPP, the passive house design software, the house is likely to overheat (ie, rise above an internal temperature of 25C) up to 20% of the time until some curtains are installed on the south façade, which will drop the figure down to 8%.

But Naughton would rather allow this overheating in the design calculations and give his client the ability to mitigate it with large openable windows and good ventilation than design it out with solar shadings, which might block the sweeping sea views (though there are 12 square metres of solar PV panels which provides some shading to the south-facing glass). “When you’re in the Irish countryside, and you’re not in an urban situation, and there aren’t security or noise issues, as long as you can open the windows and get the air through, you’re going to get to outside temperature, and in Ireland that’s rarely over 25C,” he says.

Máire Aoibhinn says the house can get quite warm inside if she’s cooking, or if she has lots of guests. But opening the right windows on either side of the house creates an effective cross-breeze. “It’ll cool down reasonable quickly,” she says. As a timber-frame building it’ll cool down quicker than a masonry one, too. 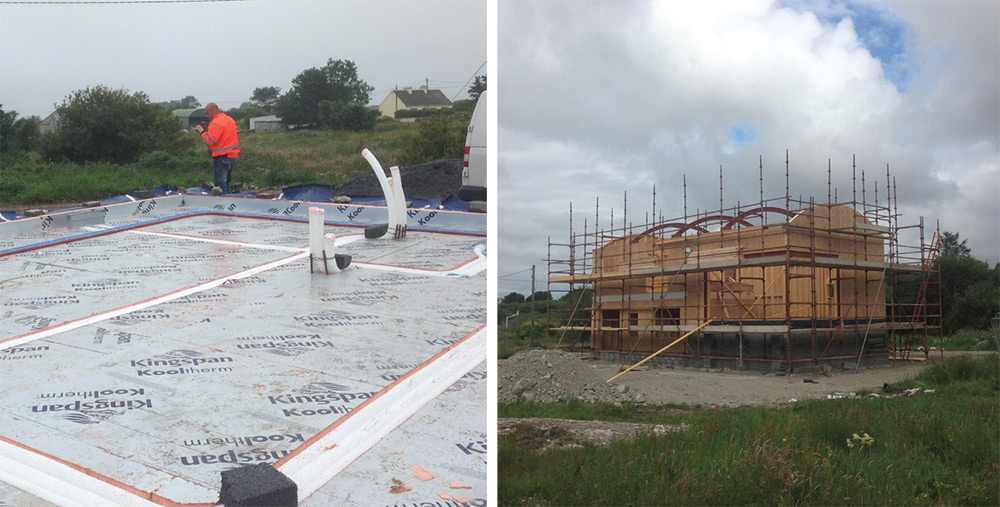 (Left) the lower ground floor features 200mm Kingspan K3 insulation – including channels cut into the top of the insulation layer to house the MVHR ductwork – with 70mm K3 insulation upstand to edges, (right) The timber frame was built by local manufacturer Irish Eco Homes and was erected in just five days

The thermal mass of the exposed concrete floors downstairs also helps to soak up excess heat. The concrete warms up so much that guests ask if she has underfloor heating (she doesn’t). Besides the polished concrete, one of the principal materials you notice inside is the exposed OSB, used for both the ceiling and staircases. It’s a clever alternative to expensive timber cladding and a nice way to show off the house’s timber structure.

For Naughton, building the house with timber was the obvious choice — given the height of the walls, building with blockwork would have required a lot more structural steel. The timber frame supports the load of the steel that’s needed to form the curve of the roof, so there’s no need to rest this steelwork on the foundations.

Meanwhile, the steel that frames the large sliding doors does sit on the foundation, but is isolated with a thermally broken plate, and well insulated on its external and internal surfaces. 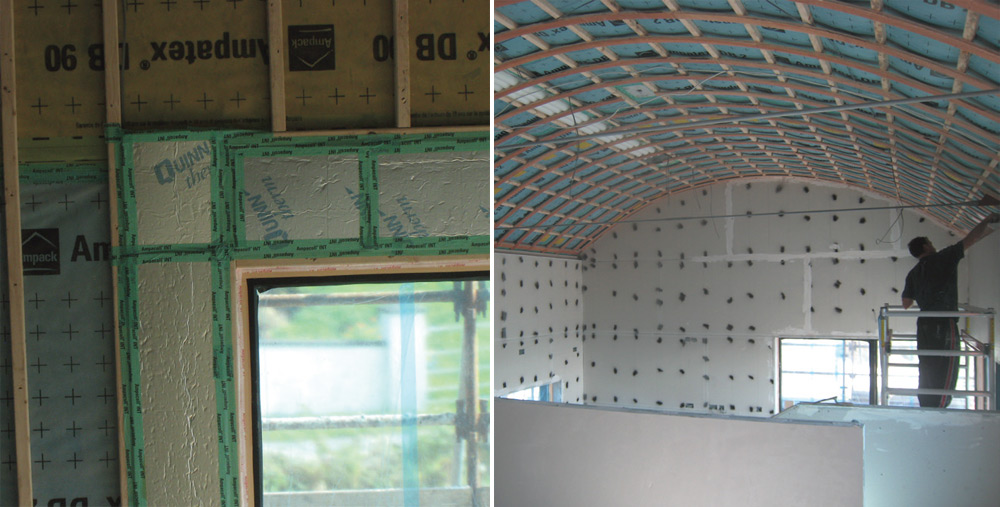 (Left) Airtightness taping around windows and over edges of PIR insulation; (right) Ampatex airtightness membranes were installed in the walls and roof

The timber frame was built by local manufacturer Irish Eco Homes and features 220mm of mineral wool between the studs, plus rigid insulation boards outside and inside, while the roof contains 400mm of pumped cellulose. “We saw it as an interesting and challenging project for timber frame with its vaulted barrel ceilings and double height spaces,” says Adrian Gallagher of Irish Eco Homes. “It required experience and ingenuity, culminating in the frame erection taking just five days.”

I ask Naughton if hitting the passive house airtightness target of 0.6 air changes per hour was straightforward. “With this guy,” he says, pointing to builder Niall Dolan, “yeah, it was.” Dolan in turn praises the quality and detail of Naughton’s design drawings. The house is principally heated by a Nilan Compact P unit, which combines heat recovery ventilation with a small air-source heat pump. The heat pump provides both hot water and space heating — priority space heating is via a 1.5kW post heater in the supply air of the ventilation system, then to towel radiators in the bathroom, all of which are thermostat and timer controlled.

There’s also a small, standalone solid fuel burning stove in the kitchen – a room sealed unit with external air supply. Passive house occupants often report that their stoves are redundant, but not this one. “You’ll notice the darker days, it’ll be cooler when you come home in the evening, and you’ll put on two briquettes. It heats up really quickly, the whole place gets warm really quick. It’s nice to look at as well, as part of the aesthetic,” Máire Aoibhinn says of the stove. 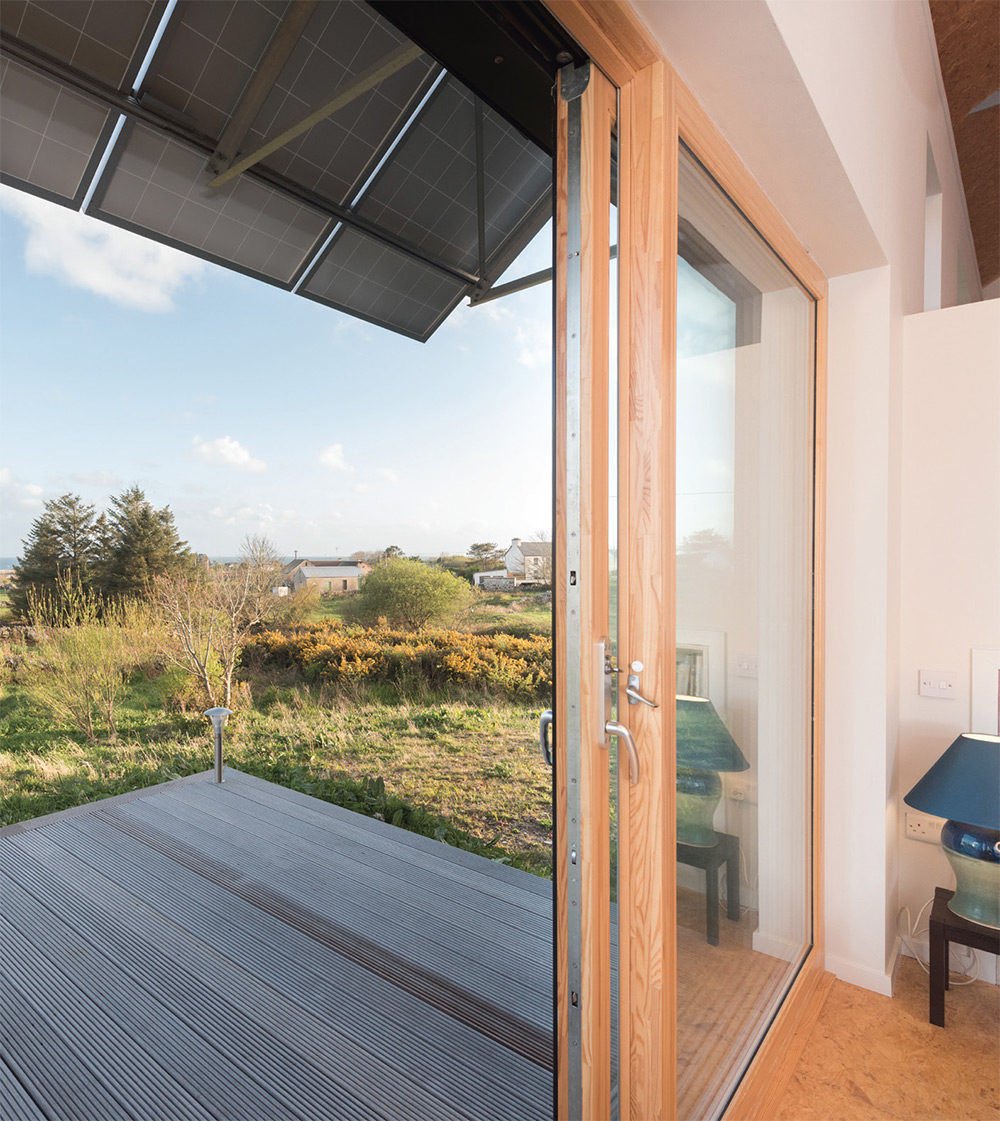 Lester Naughton says that, even when he designs a house close to passive standard, clients often want a full central heating system. But he says that for the same price as a boiler and full set of radiators, he could spec the Nilan Compact P, which can deliver space heating, cooling, hot water and ventilation.

While the house was submitted for passive house certification, it’s unlikely to achieve it now because the windows fall just short of the required thermal performance. But according to Lester’s calculations the overall space heating demand is inside the passive house target of 15kWh/m2/yr.

Máire Aoibhinn says the house is a remarkable contrast to one that was on this site before, and which was knocked to make way for this one. Her old home had no attic insulation, no central heating, and the kitchen was even prone to frosting inside.

But she was amazed by the warmth of her new house almost as soon as she moved in. “It wasn’t even quite finished in February [2015], and I don’t know how many days I went out of the house in a t-shirt, and the car was frosted,” she says. “It’s bizarre, it’s kind of like a completely different climate…the biggest complaint people have is that they’re too warm.”

Electricity: 5 Gintech solar PV panels, each with max output of 250 Watts each.