Designed in a traditional farmhouse cluster on a greenfield site amid the hedgerows of rural Cork, this new passive home by the River Sullane pays deep attention not only to energy efficiency but also to natural light, elegant design and preserving the ecology of its sensitive setting.

They say Macroom is the town that “never reared a fool”, and if the quality of a new passive house located near the Cork town is any evidence, it may just be true.

As well as being locals to the area, it probably helps that homeowners Oliver Long and Aisling Buckley work in the construction industry — he as a quantity surveyor and she as a civil engineer — and between themselves and architect Neil Kane, they were able to pull together a strong line-up of professionals to make their dream NZEB-beating new build a reality.

Built on a large site 3km away from Macroom town centre and where the River Sullane flanks its southern border near Linnamilla Bridge, this attractive cluster of farmhouse-style buildings nestles nicely within the wall of mature trees that surrounds the site. 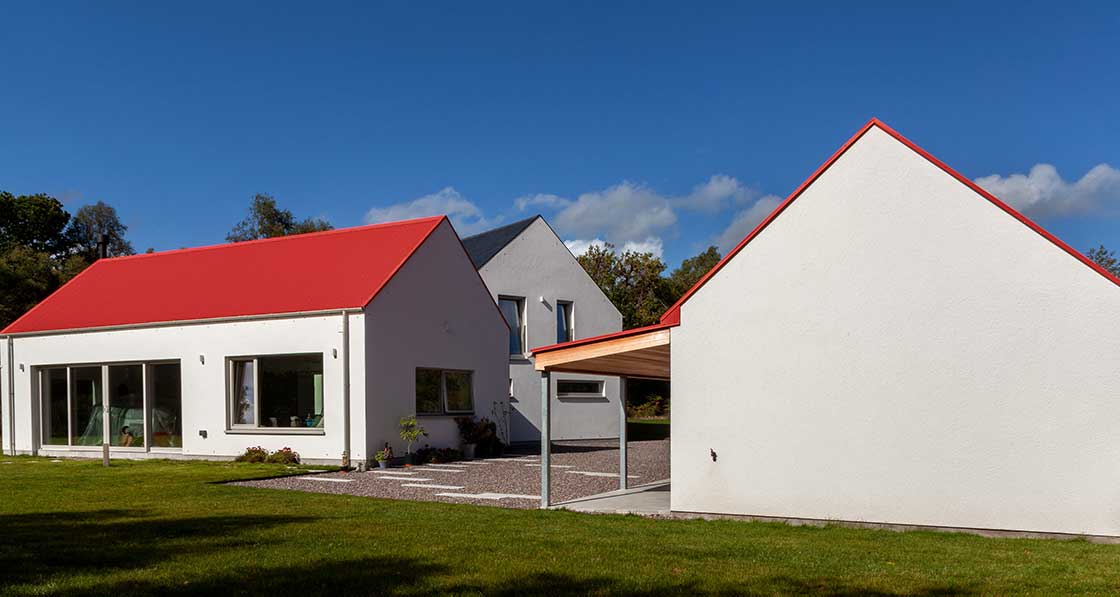 The building materials were chosen with an eye to low-maintenance, robustness and longevity.

If you’re familiar with Cork County Council’s design guidelines for rural homes, you can see straightaway that this home aligns nicely in terms of where the individual buildings sit on the site, as well as its simplicity of form and absence of frills.

But there was also a great deal of thought about the dwelling’s relationship to the landscape. Amid a fairly extensive design process, Kane produced a large (1:200) model that included the whole site, and which allowed all involved to see clearly the advantages and disadvantages of various locations.

“In planning terms this was always going to be a hard sell given the natural beauty of the site and proximity to the river,” says Kane. “So, when we met with the local area planner the design was well developed and we prepared 3D visualisations. The planner’s comment was ‘Wow…I wish this was my house!’”. 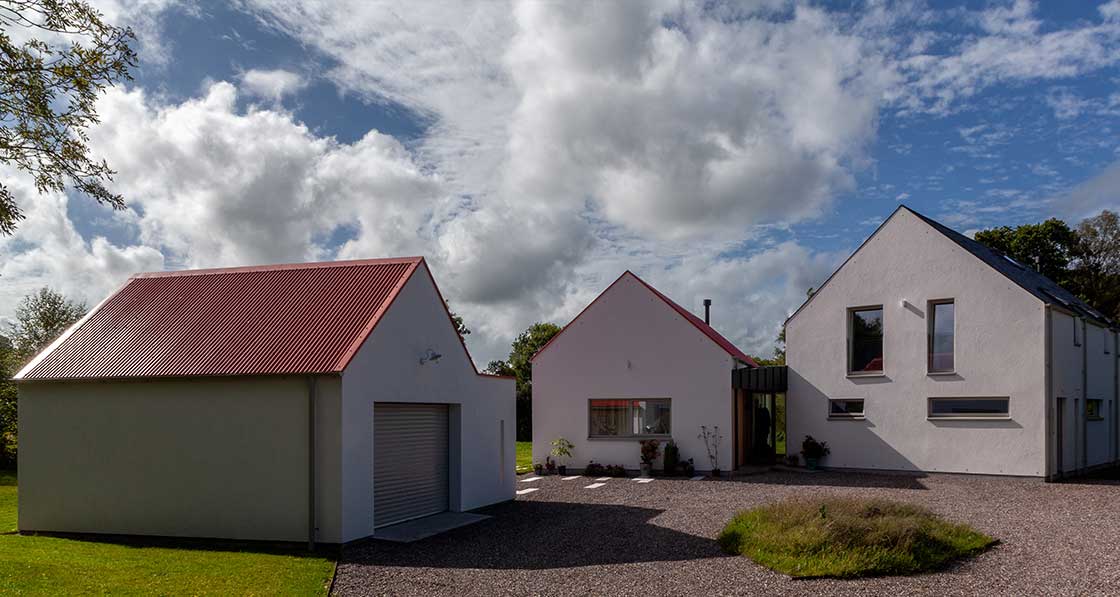 The garage, for instance, provides a barrier to the road for privacy and noise. “It was the logical location as it doesn’t affect views from the house,” says Kane.

According to Kane, the initial design began with the two main buildings parallel to each other (the smaller of the two contains the open-plan kitchen and living area), but a decision was taken to angle the bigger two-storey bedroom block to allow more solar gain to the north corner, and to enable better internal views throughout the house and out to the landscape. 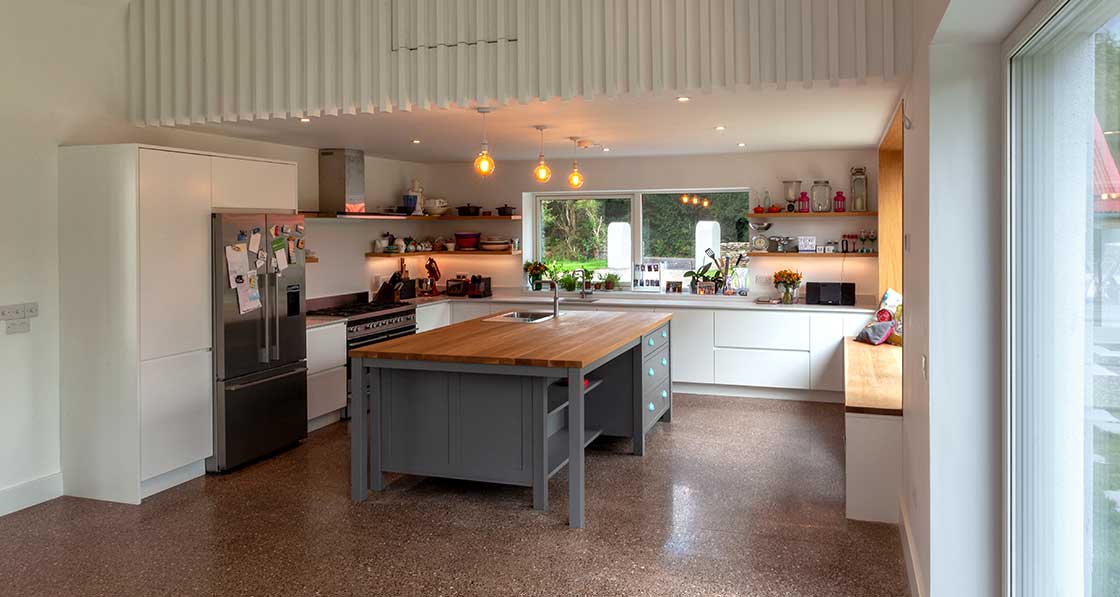 This had the effect of turning the linking block (and front entrance) between the two houses into a wedge shape and creating what is probably its strongest architectural feature.”It’s a bit of a design trick where the entrances are so important,” says Kane, describing the narrow and low portal that opens up to a wider and higher space. 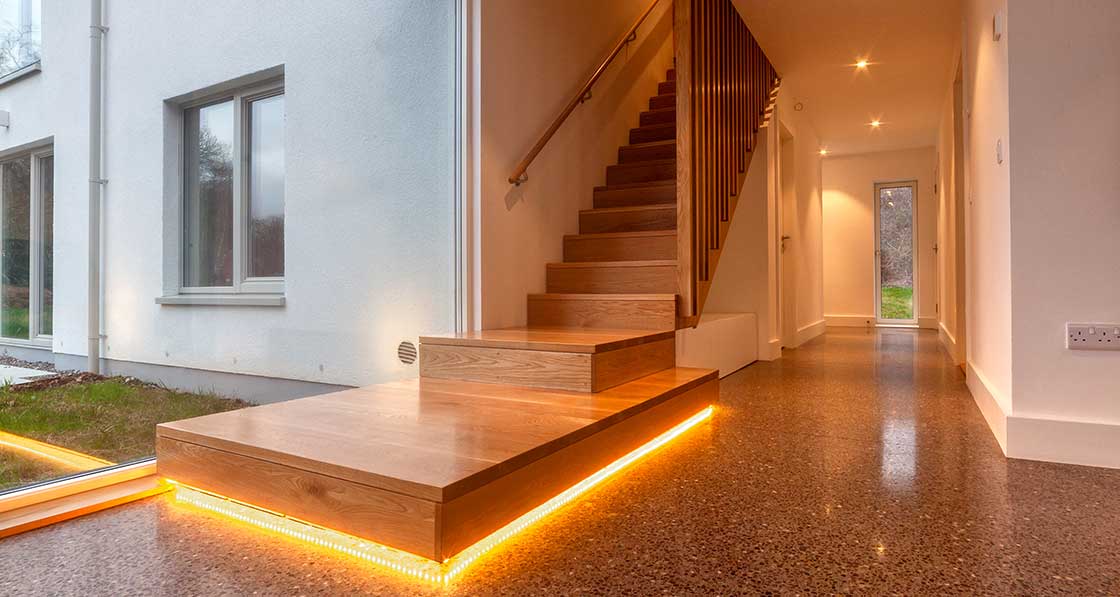 “Sometimes you need to get the maximum impact; it has less impact if you have a very high canopy above you when you walk into a space...[But] when you come into this space, it’s a little higher as you walk inside the lobby and then you have this large window looking out and the stairs to the right of that, and you’re looking straight out into the landscape.”

The large window looks out to the west of the site, which contains the thickest area of hedgerows and trees.

When the couple bought the site in 2014, it was somewhat overgrown and left to the wilderness, but they were anxious not to disturb its natural quality too much. 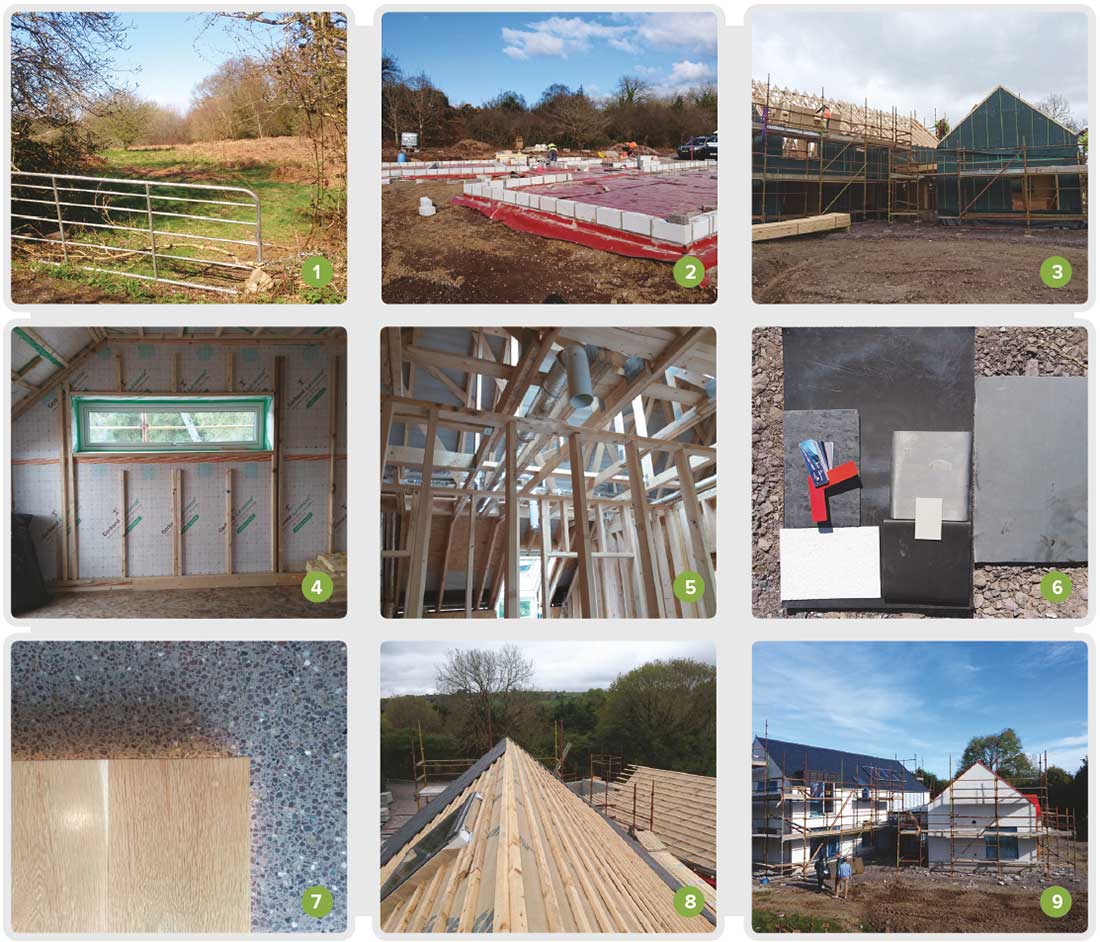 1 Site entrance view in April 2016; 2 the ground floor features a course of Quinn Lite B7 aircrete blocks to perimeter; 3 erection of the Cygnum timber frame structure almost complete; 4 Gerband SD2 Control airtight vapour barrier fitted to inner side of wall; 5 ductwork for the BEAM Axco heat recovery ventilation system; 6 palette of materials and finishes used on the project; 7 oak stair tread with the polished concrete floor underneath; 8 natural slates being installed on the roof; 9 the house nearing completion.

“When I first visited the site I was struck by the wild landscape of ferns, grasses, heather and briars and sound of the river as it sped-up towards Linnamilla Bridge,” says Kane.

“We avoided the common approach of cutting down the roadside hedges by meeting the local roads engineer on site and discussing sightlines and, through this discussion, the mature ash tree at the entrance was retained.”

This strong conservation mindset extended to moving, rather than chopping down, a relatively young blackthorn tree that sat in the centre of the site, and which now thrives in a new location to the south of the house. 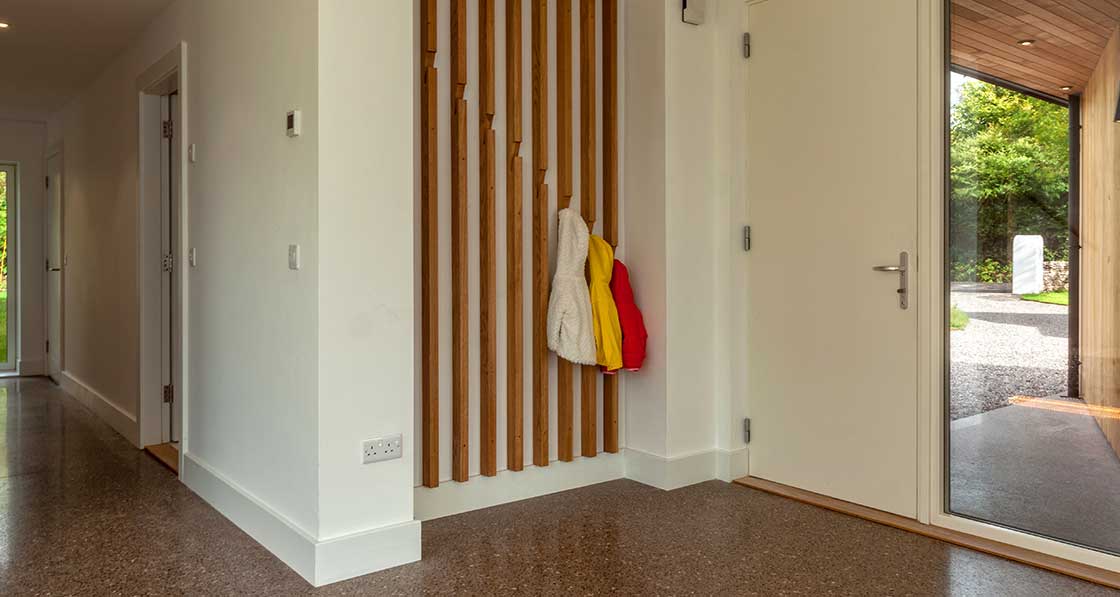 “The house is surrounded by nature and we are lucky enough to see lots of native species all around us here. We also intend to enhance the natural environment by planting native trees,” says homeowner Oliver Long.

The couple’s interest in conservation dovetailed nicely with an open-mindedness about building to the passive house standard, as per Kane’s recommendation.

“We were aware of and interested in pursuing passive house standards, but we did not know if they were achievable without compromising on design, floor area and/ or budget,” says Long. “As we set out on the project, we were willing to investigate this.”

The buildings are all timber-framed (which was handy given that suppliers Cygnum are based just 5km away) with a concrete block outer leaf and silicate render finish.

The building materials were chosen with an eye to low-maintenance, robustness and longevity — an environmental approach in itself, says Kane, but the green credentials are also bolstered by the use of cellulose (recycled newspaper) insulation, natural slates, and local field stone for the entrance walls.

The PHPP (passive house design software) calculations were done with site-specific climate data, and while the dwelling is not yet passive house certified, the clients plan to submit for certification this year. It also meets Ireland’s new nearly zero energy building (NZEB) standard (see ‘In detail’). 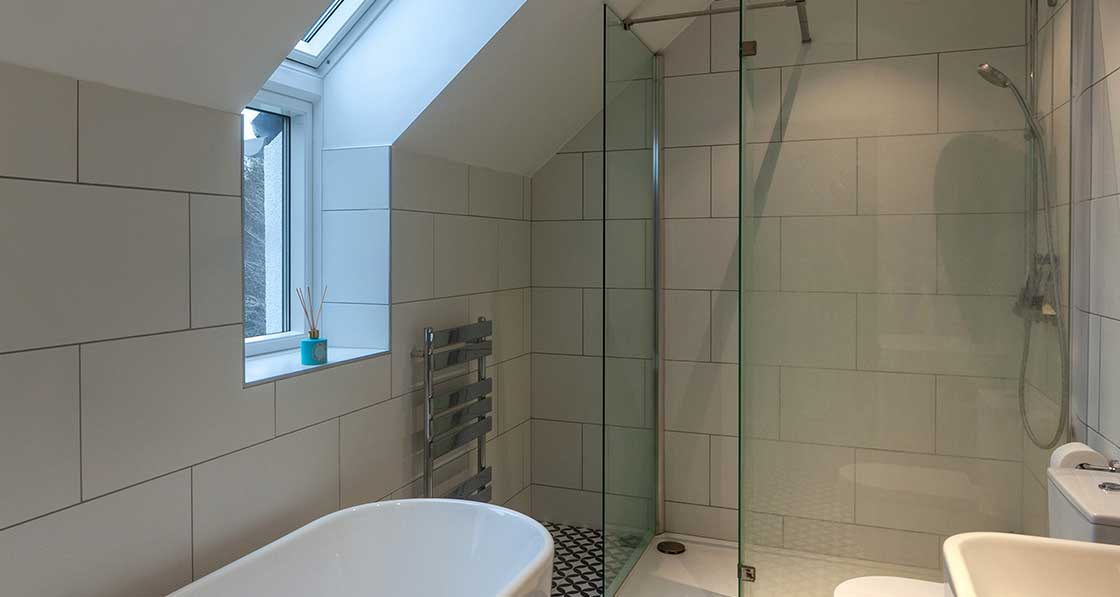 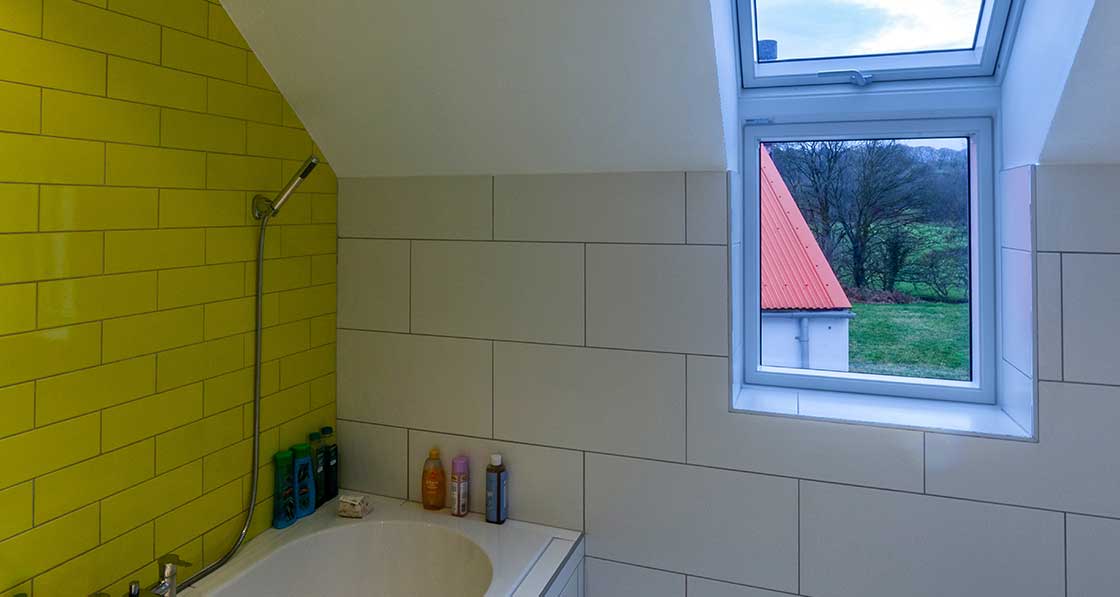 The couple love the large glazing for the light and views of nature.

Heating, meanwhile, is courtesy of an air-to-water heat pump and underfloor heating on the ground floor, plus some radiators upstairs, which altogether provide a heating load probably well above what the house needs. Unusually, as builder Rodney Cronin of Vinro Construction explains, the heat pump is controlled via individual room stats, for a couple of reasons – there’s the fact the house isn’t as open plan as many passive houses; and that it’s divided into two linked buildings. “The rear building is being shaded by the front building – so wouldn’t get anywhere near as much solar gain as the front building,” says Cronin. “The stats turn off the rooms that reach temperature sooner and maintain a heat supply to the Northern rooms – in order to get the house to an equal level.”

Long admits that the house’s two stoves very rarely get lit, and the couple may need to invest in blinds for the kitchen and living room area, as the south-facing rooms tend to get hot in the summer.

Kane says that “the mature trees do help with shading but that the addition of louvres or a brise soleil of some sort might be advised in the future if we keep having summers like 2018.” But he adds that good cross-ventilation strategy was part of the design detail, which enables hot air to escape quickly through opened windows. 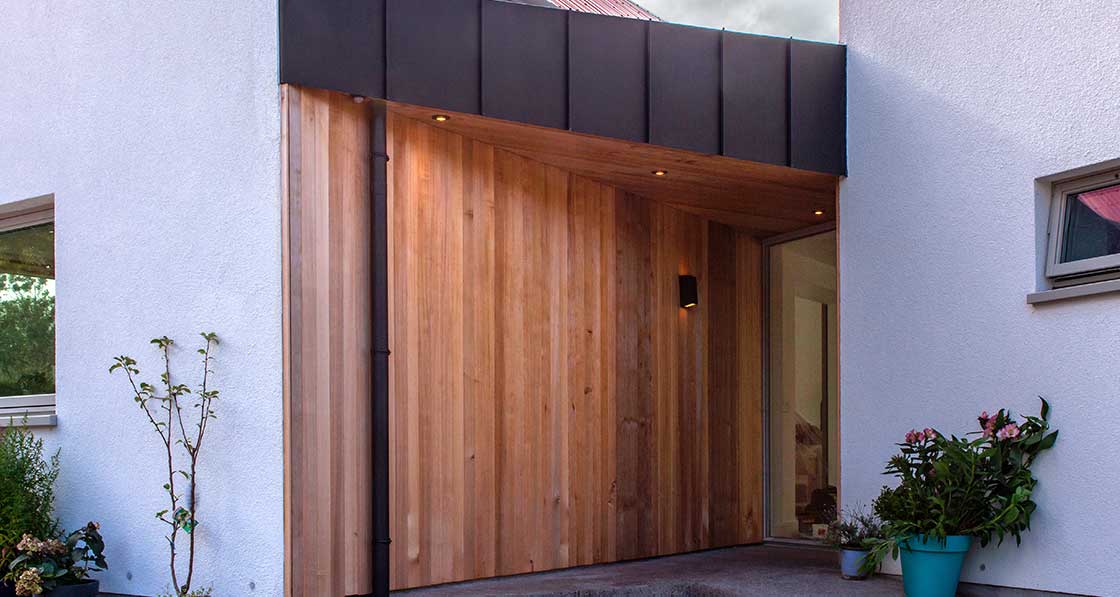 The consistency of temperature in the winter time is lovely.

Long reports that they managed to keep relatively close to the budget thanks to “a good set of contract documents” although Kane adds that some details from the tender design had to be omitted, including the brise soleil to the south facade.

“Generally, as an architect some of our good ideas are dropped because of budget, but thankfully some very nice items were retained on this project, including the oak coat hanger detail that I designed for the entrance lobby and made by Ruairi Brennan, a local joiner who also made the stairs.”

However, Kane sounds a general note of warning about the diffi culty of fi nding skilled tradespeople for passive builds now. “Due to increase in construction activity there is a shortage of skilled trades people now coupled with a shortage of construction apprentices coming through,” he says. " A skills shortage often results in delays and higher costs with some specialist elements of the works on site.” 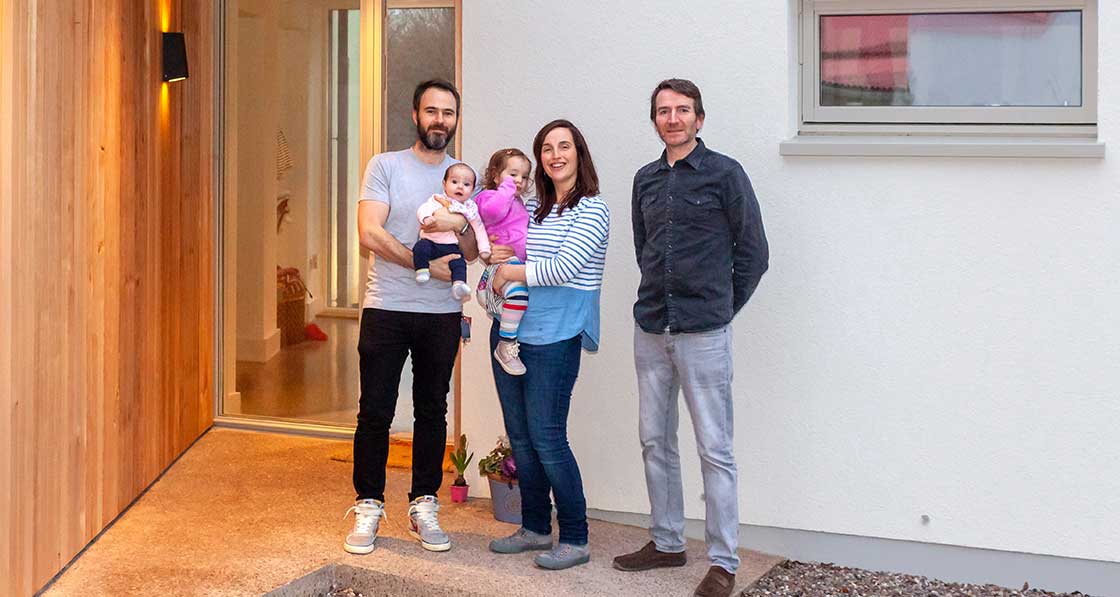 Having lived in the for about a year now, the couple love the large glazing for the light and views of nature all around them that it provides. “It feels diff erent to any house the we have lived in previously, or any building we have been in for that matter,” says Long.

“Th e consistency of temperature in the winter time is lovely, especially the warm floors and lack of drafts. We are still getting used to the comfort that it provides.” “Our electricity bill has hardly changed from the house that we were renting previously, even though it now also includes all heating costs.” 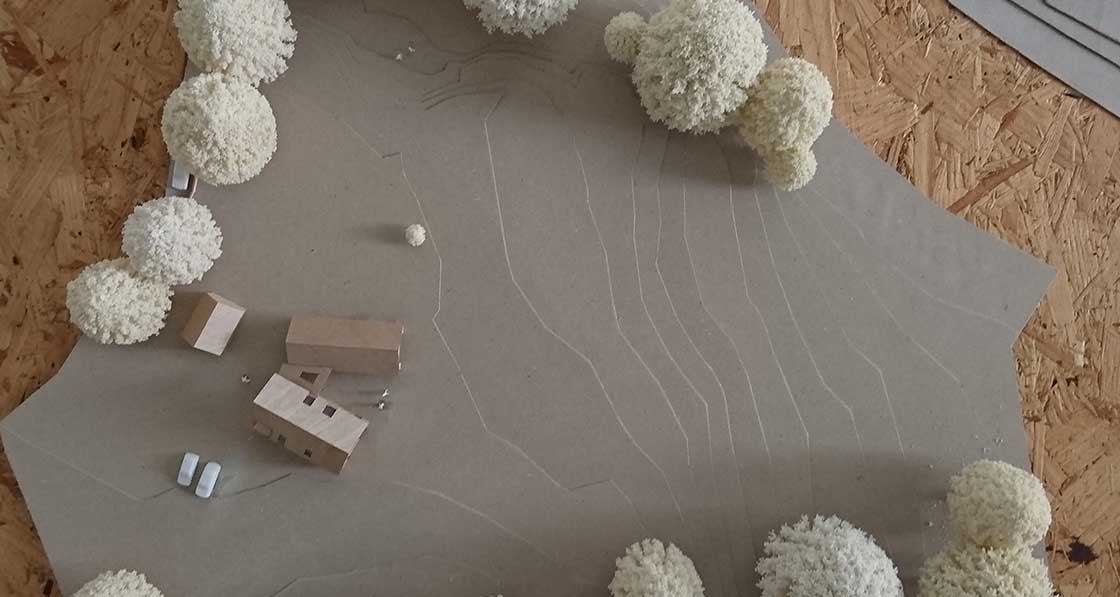 Airtightness: 0.56 ACH at 50Pa Thermal bridging (architect’s note): We included a Y-value of 0.08 in DEAP assessment, as all details are in accordance with Acceptable Construction Details (ACDs) for Part L 2011. We have bettered this value but without thermal modelling on each detail this default is used. There are also standard PSI values for standard details available from Part L, but the construction is not a standard timber frame construction and these PSI values may not be applicable, so we could not calculate a custom Y-value in this manner. We followed best practice for ACDs under Part L and/or followed passive house best practice detailing. 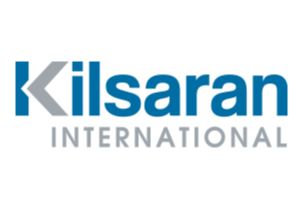