As passive house moves into the mainstream, construction costs are bound to keep coming down, with increasing competition among suppliers, and designers and contractors becoming familiar with the most cost-effective routes to meeting the standard. One recent self build shows that low cost passive house needn’t be a distant aspiration – it’s achievable now.

Meticulous attention to detail and a lengthy planning phase has delivered a 2,375 square foot passive house in Co Down which cost £192,000 to build. Paul McAlister Architects Ltd has published detailed costings for every element of the project, revealing just how affordable passive house can be.

“It reassures people that it can be done at a reasonable cost,” says Paul McAlister of the company. He points out that the passive house premium is typically set between 10 and 15% over conventional build. (ed.- it’s questionable whether passive house adds any additional cost in the Republic of Ireland, due to changes to Part L introduced in December 2011.) McAlister’s passive house however cost just 8.35% more than a house built to Northern Ireland’s building regulations. His figures include just £3,000 of PC sums and exclude professional and development fees.

He has compiled detailed tables which compare the house with one built to Northern Ireland’s minimum standards, as calculated using the UK’s Standard Assessment Procedure (Sap) 2009 software. McAlister logged each phase of the build, from foundations and ground floor construction all the way through to the installation of domestic hot water and space heating systems. 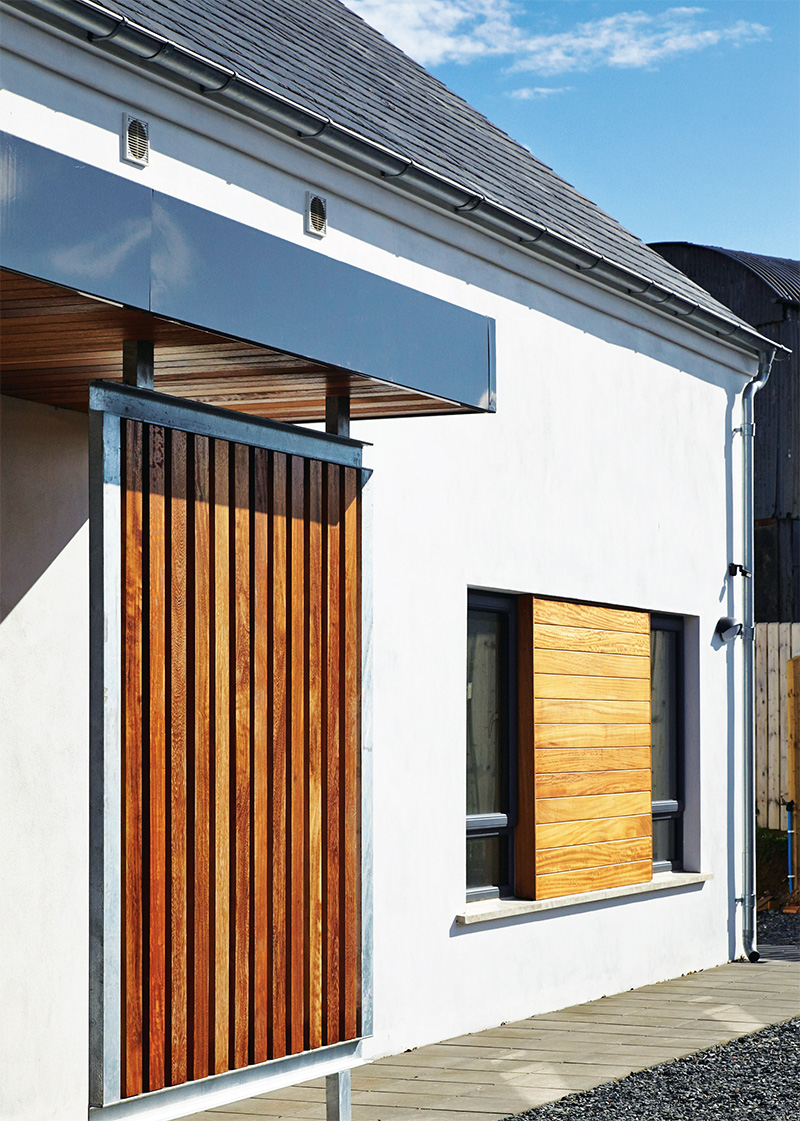 In the coming year, he plans to run a detailed analysis to identify the point at which the additional measures taken to deliver the passive specification will have paid for themselves through fuel savings. “It all depends on how oil and energy prices go, but those figures will give it a different slant.”

Nor is this the cheapest house that McAlister could have built. This, he says, was a high spec build. “We know we could do it cheaper if we had less sophistication. I believe we could do it for £75 a square foot if we used ordinary concrete tiles and so on. You used to hear some terrible stories about the cost of passive house, especially in the early days but I think that’s now in the past.” 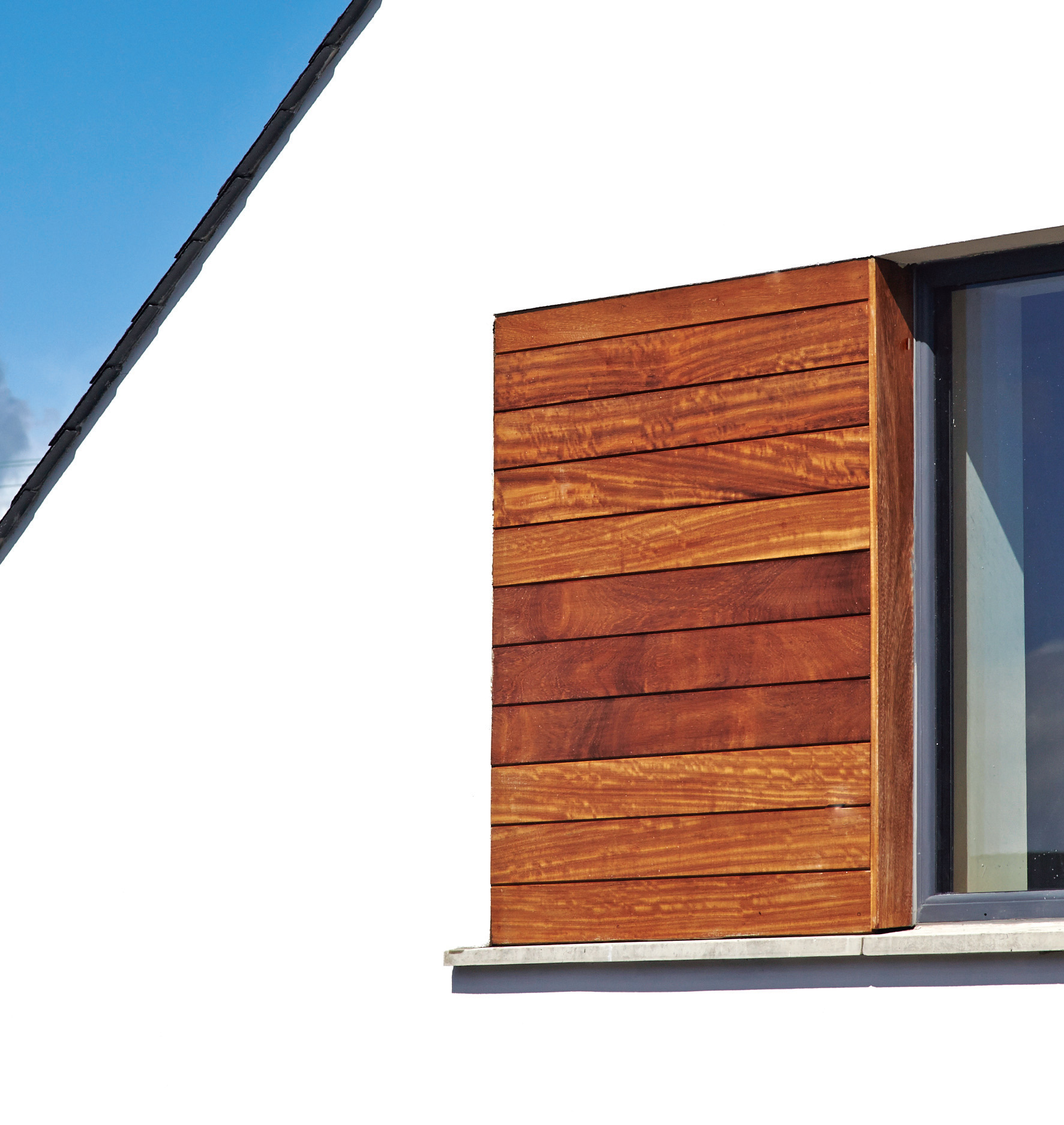 While the premium between conventional and passive continues to fall, McAlister acknowledges that delivering certified passive in a one-off residential setting still requires a highly motivated client. For the McGlinchey family who built this house, getting the energy profile of their house right was as much about doing the right thing as building a comfortable, cost-effective home.

The rural, elevated site on which they planned to build their home gave McAlister a lot of freedom when it came to orientation and layout. “We were very fortunate with the site itself in that the main view was south west facing, so immediately we were able to turn all the living spaces towards the view, and open up the glazing towards the view as well, which helped with achieving our energy rating.”

The brief specified a contemporary take on a traditional aesthetic. McAlister’s design takes the traditional Irish long house with pitched roof and gives it a modern feel. It includes iroko timber cladding, a porch feature at the entrance and double height space in the living room.

During the tendering process, the architect worked with one of the tendering structural insulated panel system (SIPs) companies to create working drawings for the project. But when that company didn’t win the tender, a whole new set of drawings had to be drafted. The resulting delay did however give the project team the time to work though plans and iron out any potential issues. 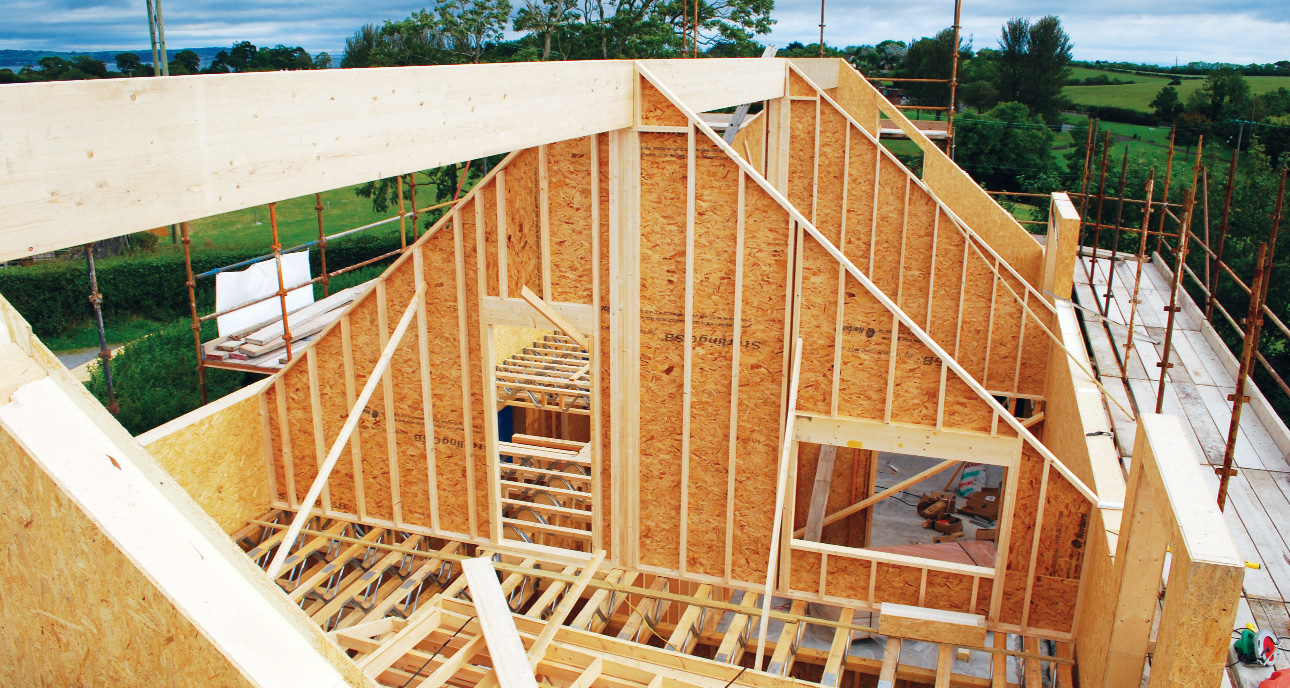 Erection of the structural insulated panel system, which facilitates eliminating cold bridges, because the system creates a continuous thermal envelope through walls and roof

“We stopped and said ‘let’s get this right before we go on.’ We didn’t do it on a wing and a prayer.

We took the time to get the details redrawn, then we got them certified and did the thermal bridge analysis to make sure it all worked, so we were quite rigorous in that sense.”

As with all projects of this nature, the central challenge for the architects lay in designing away the cold bridges. Because PMC want to build in-house expertise in this area, they did all of the calculations themselves, then forwarded the plans to the Passive House Academy in Wicklow for verification.

The team also used the passive house software, PHPP as a design tool, working throughevery nuance of the plan to ensure that they remained within passive house criteria.

McAlister explains that the structurally insulated panels (Sips) were selected as a building method because in the first place, the client expressed a preference for using timber in the build. “We liked the Sip panels because they’re injected with insulation in the factory and for that reason we did not have to rely on on siteworkmanship to the same degree. The house is a storey and a half with Sip panels on the roof as well, so we had a nice neat envelope. I liked it because I knew that it would perform.” 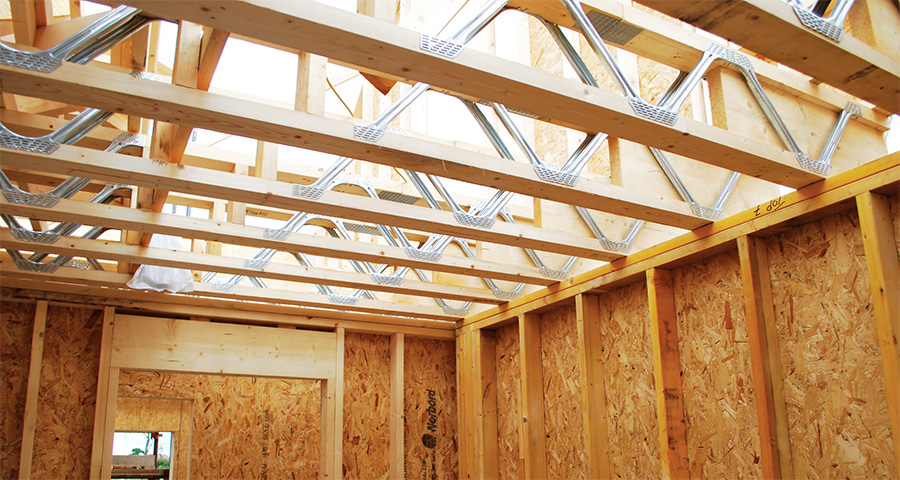 The passive tailored Sips – supplied by Warrenpoint based manufacturer Sipfit – are the single greatest cost item in the spec, and the element of the build which commanded the highest premium over the equivalent conventional spec. According to McAlister’s tables, the passive SIP frame cost a total of £56,000. By comparison, the SAP 2009 construction, which is also a SIP frame – albeit with substantially less insulation– cost £44,800, a difference of £11,200.

Primary responsibility for airtightness lay with contractor Kevin Mulligan of Baylands Construction. “There was a lot of work with the airtightness,” he says. “A lot of attention to detail and trying to get my subcontractors used to how you have to work around an airtightness membrane. Classic example: The plasterers nailed a three inch nail through the membrane to hang their radio. You’re just trying to teach old dogs you can’t do this, you have to try to get electricians and plumbers up to speed; you just can’t willy-nilly drill holes anywhere you want, you have to plan where you’re going to put your cable and pipe routes.”

Like Paul McAlister, this was Baylands’ first passive house, and inevitably, the project brought the team up a steep learning curve. Through repeated airtightness tests, Mulligan achieved successively lower airtightness results until he finally broke through the magic 0.6 ACH.

McAlister also cites choosing a heating system as another challenging aspect of the job. 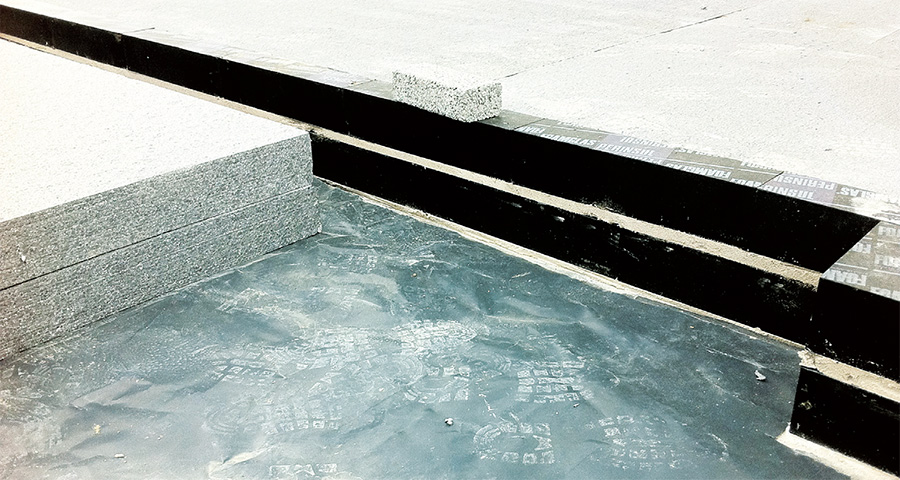 “It was designed to require 14 kWh/m2/yr. This meant it wasn’t a low enough heat load to be carried through the ventilation system so we needed some sort of heat source. The calculations showed that the maximum steady state heatl oss was three kilowatts when it was minusten outside, so we knew that we had to provide a heat source that worst case scenario would provide three kilowatts.”

A room-sealed wood burning stove in the living room provides approximately the required three kilowatts, but a back-up heat source was still needed. McAlister’s first solution was to install a small underfloor heating system connected to an air source heat pump, but because the capital cost of the underfloor heating came in close to £7,000, the budget wouldn’t allow it. “In the end, we decided to install direct electric radiators. They’re not in yet, but instead of costing £7,000, they cost £500. We have six kilowatts of direct electric which we hope we never need. But they’ll be there there if we do.”

A heat pump was nonetheless installed – an exhaust air heat pump, which forms part of an integrated heating, ventilation and hot water solution, heating towel rails in the home’s two en suite bathrooms and contributing to domestic hot water supply. The heat pump has controls in place to source the warmest air at any given time – whether from external air, from the extract from the MVHR system, or from the ventilated loft in the summer. How water is provided primarily by four square metres of solar thermal panels feeding into a 300 litre domestic hot water cylinder. According to renewable heating provider Solmatix, the solar will generate free hot water for six to eight months of the year with the heat pump taking over during the winter to provide cheap hot water. 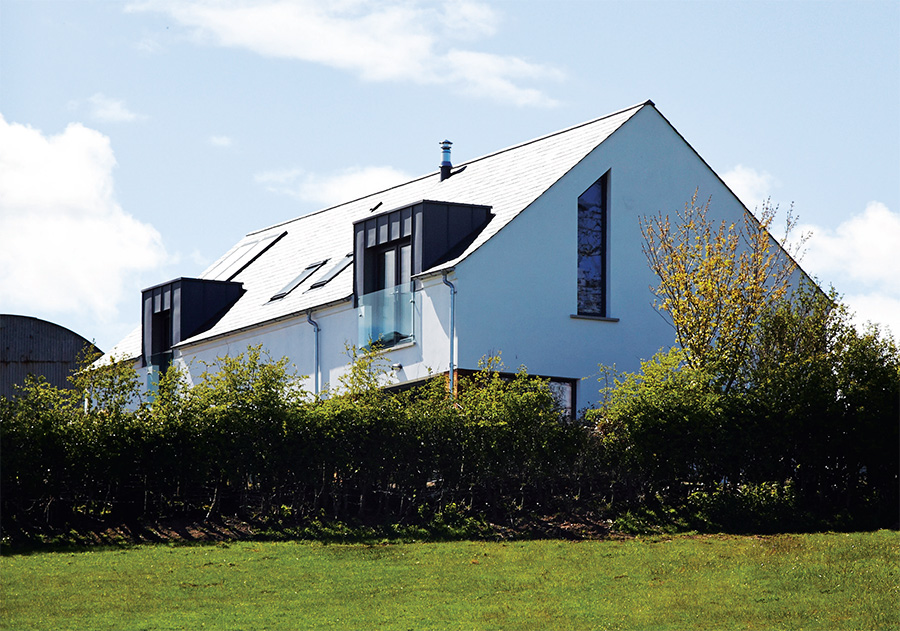 The McGlinchey’s have now been in the house since May – with the house wired for direct electric radiators that haven’t yet been installed– and so far, so good.

“There’s going to be a bit of a learning curve,”says Paul McAlister. “but they’re really pleased.What we really need now is to see how it performs in the winter”