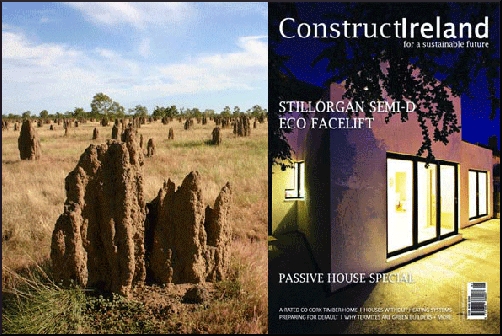 The "Sputnik moment" comments in President Obama's state of the union address reflected the received wisdom that the world must focus on new technology to counter the threats climate change and energy security posed to the human race and life on earth as we know it.

When award-winning green building magazine Construct Ireland asked Harrington to pick a handful of inspirational green buildings from around the world, the architect - famous for his York Street eco housing project in Dublin and the eagerly anticipated Rediscovery Centre in Ballymun - eschewed the work of high profile architects in favour of much more humble designers: termites. "Barossa termites — blind wood-eating insects found in Africa that are best known for building massive, finely engineered earth nests that can reach seven metres in height and come with fully integrated passive temperature control," he writes.

"When the central core of the nest becomes too warm or the air too stale, the termites unblock openings to ventilation shafts to
start the draft that drives the system. In extreme heat, this system is supplemented by evaporative cooling. The termites travel tens of meters down tunnels to the water table to collect minute quantities of water to place into the system for cooling."

Harrington's selection also finds green inspiration in the dry stone walls that have been built in the north west of Ireland for over 5000 years, the self-sufficient country houses that have been a feature of Russian life since the 1980s, and the minimalist existence of people living in barges on Ireland's canals.

The latest issue of Construct Ireland will be in newsagents nationwide on Saturday and is packed with practical information and inspiring examples for anyone looking to build or upgrade their homes to high standards of comfort and energy performance without wrecking the environment.

A synopsis of some of the other main feature articles in the new issue:

Living without heating
The advent of central heating improved the comfort of life for countless Irish people over the past century, but as energy efficient and passive building grows some pioneering homeowners think they can live without it. What’s life like for them?

Low energy upgrade and extension for Stillorgan semi-d
An energy-conscious renovation and extension in south Dublin breathes new life into a typical semi detached home — the house is now wrapped with external insulation and boasts breathable and ecological materials too.

Rosslare passive house scheme pitched to Irish buyers
A new development at Grange Lough, Rosslare, reveals that passive houses can be made Irish – both in terms of what they’re built with, and how they look.

How to prepare for Ireland's inevitable default
Taken at face value, the EU/IMF bailout deal seems to add insult to an already severely injured Irish economy. Richard Douthwaite explains why the bailout may turn out to be a gift to Ireland, and offers some advice for dealing with a default.