The Chester-based company are currently on site with the fourth of a series of domestic retrofit projects with Andy Simmonds of Simmonds Mills Architects, in and around the Hereford area.

The idea came to Ecovert MD Tim Hulse on Simmonds Mills’ Chestnuts deep retrofit and extension in Chepstow, which was practically completed in December 2021.

Hulse had worked with EPS EWI but wasn’t sold. “I’ve been trying to steer away from oilbased products. I don’t think we should be using such energy dense materials. And in this case the client wanted a boarded finish [rather than rendered insulation].” Hulse’s solution: I-beam timber frame pumped with cellulose insulation, with a timber clad finish. Hulse proposed using the system not just for the new build extension, but for the EWI too, meaning a seamless system for new and old wall alike.

A Partel airtight layer is then applied to the outer face of the insulation layer, with careful hygrothermal simulation proving its suitability at design stage, and ongoing monitoring via interstitial probes in the walls backing that up.

The system has another key advantage in a time-poor industry. “It’s a lot quicker,” he said. “I’ve done EWI with wood fibre and EPS and cork, and it’s quite a lengthy process cutting the blocks and everything.”

Hulse’s route to the vanguard of green building has been circuitous. He followed his parents and siblings in emigrating to Canada after completing an engineering degree at the University of Sheffield. His career took him into IT, moving back to the UK and into banking software before deciding a career change was in order. “I was in IT for 22 years. I’d been working with ones and zeroes for decades. The whole thing just smelt – it didn’t feel right. I ended up selling a banking system to a bank in Belgium for €30m. It was boring.”

A masters degree in architecture focusing on advanced energy efficiency and sustainability at the Centre for Alternative Technology in Wales drew Hulse in. Having bought a barn conversion after moving back from Canada, Hulse was shocked at the discomfort compared to Canadian higher energy performance levels. “It was freezing,” he said. “Because I was trying to figure out what to do with that house, I went on a SPAB course, and that, combined with the masters degree ended up doing a dissertation on making homes in conservation areas net zero. At the start of that I did a survey of every house within five miles of my house. It was shocking how people lived in the winter – people not using part of their houses.” 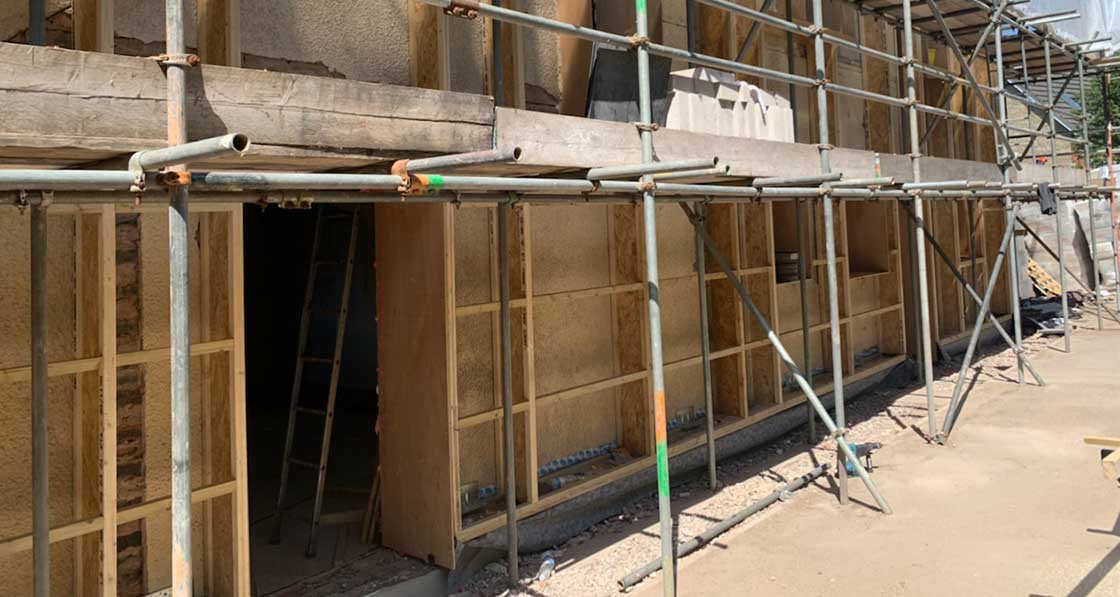 “I couldn’t put my finger on what energy efficiency meant in England - it wasn’t target based. I saw the passive house designer course at Warm and it was a bit of a revelation – you could actually use building physics to explain things.”

Having qualified as a certified passive house designer and certified passive house tradesperson, Hulse joined the Association for Environment Conscious Building (AECB) and reached out to Andy Simmonds, who combines his work at Simmonds Mills with the CEO role at the AECB, to ask if he wanted to collaborate. That relationship has included a certified passive house in 2013 and a subsequent build to passive house principles, before the current run of four retrofits. And the I-beam cellulose external insulation model is a consequence of a specification Simmonds made on the 2013 project. “Andy specified Warmcel in the roof, and it quickly became a standard, so I decided I might as well buy a machine and do it myself,” he said. The cellulose external insulation detail was an obvious conclusion for Hulse. “When you’ve got a hammer, everything looks like a nail. It’s quicker to install. It can be slightly messy if all the holes aren’t sealed. But you can do a lot of insulation in a day.”

Hulse project managed the first three retrofits using this system, working with and gradually upskilling a local builder. On the first project, Ecovert did the airtightness, windows and heat recovery ventilation system. Apart from supplying the critical materials, on the third project Hulse’s installation work is restricted to the cellulose. “We upskill the builder,” he said. “That’s the idea. We leave them behind and start working with someone else after.” The same process is now starting again on a fourth I-joist and cellulose extension and retrofit project with Simmonds Mills.

“The joiners down here we’re working with – One Port – are really good. They find it a doddle to work with this. They’d done timber frame extensions before – they understood the principle. The system is well detailed – we’ve done Sketchup models. A lot of builders can’t read drawings properly. You give them 50 drawings and they just end up in the bin. I bring tablets to the site for my guys and they can have a look in 3D.”

For Hulse, every day is a school day. “It was a big learning curve at the beginning and we’re still learning,” he said, emphasizing the key role the AECB has played to help in that process over the years, and in boosting his morale when much of the industry maintained a stubborn indifference to the substance of green building. “The AECB conference has been my one point of sanity in a year,” he said. “It’s hard to turn someone into a believer. You go into this conference and there’s another bunch of idiots the same, which keeps you going for another year.”