When it comes to actual energy usage, modern buildings rarely perform as expected, with many notionally low energy buildings falling disappointingly short. As discussion continues about how to solve the performance gap, one pioneering Welsh passive building has a different kind of performance gap – it’s using 40% less energy than anticipated.

When it was built in 2009, Canolfan Hyddgen in Machynlleth became the first certified non-domestic passive house in the UK. Four years on it's still picking up accolades, winning a UK Passivhaus Award this year.

The building's sustainability agenda goes way beyond energy efficiency to encompass materials, water, biodiversity and more. It has a BREEAM excellent rating, the highest available at the time.

Built for Powys County Council, the centre houses IT for a neighbouring school, facilities for adult learners, meeting rooms and a drop-in centre and council service point. 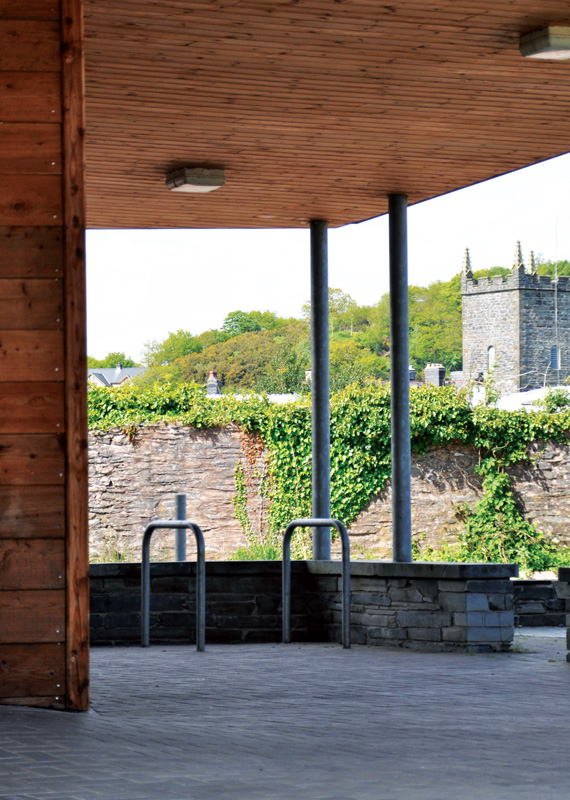 So how has the building performed since it was constructed?

"We feel the heat loss is fairly close to what we predicted," Williamson says. In fact measured space heating demand (14.8kWh/m2/yr) is almost exactly what was projected (15kWh/m2/yr).

Winter temperatures inside vary between a comfortable 20 and 22C, depending on how the thermostatic radiator valves (TRVs) are set.

Perhaps surprisingly, the building's primary energy demand (80kWh/m2/yr) is almost half that projected (144 kWh/m2/yr), mainly because computer use has been lower than expected.

Those familiar with the passive house standard know that even the latter figure is above the 120kWh/m2/yr demanded for certification. But because Canolfan Hyddgen houses electricity-hungry servers for other buildings, and because the team did everything possible to cut power use, the Passive House Institute still certified it.

The energy used to heat the building has dropped 40% since it was built, as occupants get to grips with how it functions — and learn, for example, that in a passive building radiators needn't be on if a room with lots of computers is full with people.

Now the boiler is only used briefly on cold mornings. And close monitoring has enabled the team to adjust timer controls and settings to cut energy use even further. Monitoring of a classroom full with 22 adults showed carbon dioxide, humidity and indoor temperature all within normal levels.

A small gas boiler provides space heating at Canolfan Hyddgen. "We didn't want to complicate the project with extravagant renewable systems," Williamson says. The boiler was the smallest the team could find, but at 9-22kW he reckons it's still too big.

"I've never seen so little plant in a building of this size," says building manager Edward Cain. If it's needed, the boiler delivers heat to low surface temperature radiators in the main teaching rooms and a few of the public spaces.

Heating controls are designed to be simple, robust and easily adaptable. "Boiling something complicated down into something simple is the challenge," Williamson says. 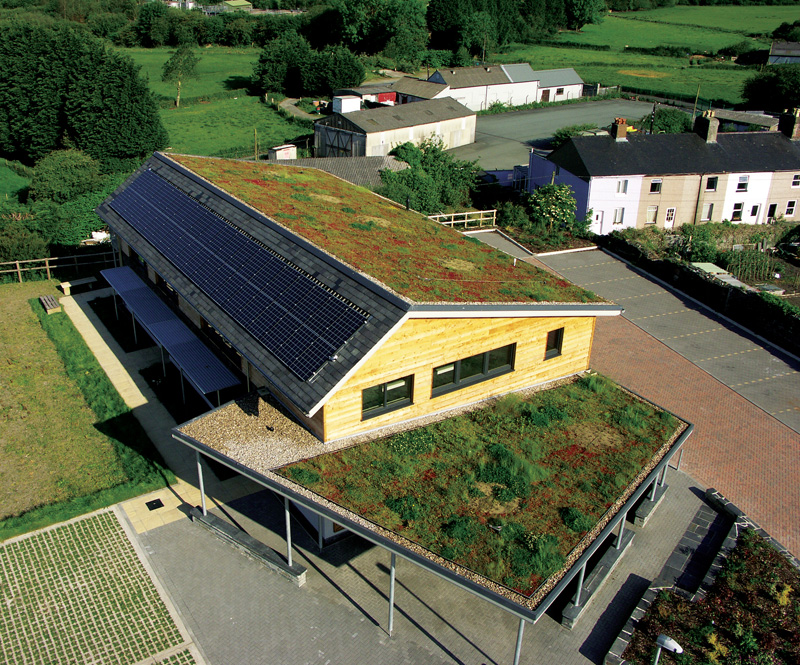 The building features a pitched roof with a solar PV array on the south-facing slope and a sedum roof, sown with local wildflowers, on the north slope

Radiators at Canolfan Hyddgen are equipped with TRVs to give occupants control. But the boiler also kicks in automatically if the indoor temperature drops below a set level.

The only hot water demand is from sinks, so point-of-use electrical heaters were chosen for water heating. But with minimal pipe runs, low flow spray taps and timer switches, water use is designed to be low.

"If you minimise the amount of water you need in the first place, then you don't need all this complicated kit behind it to provide the water," Williamson says.

Office and meeting rooms sit around the perimeter of the building to benefit from sunlight, with IT teaching spaces at the core. But a corridor and breakout spaces separate these areas from the glazed facade to protect occupants from glare and overheating. Brise soleils on the south facade, coupled with the asymmetrical pitched design of the roof, helps control these issues too.

300mm of Jablite insulates the groundfloor

Meanwhile the internal walls are constructed from Enviroblock, which is produced from secondary and recycled concrete aggregates. Made in the UK by Aggregate Industries, the blocks are suitable for use above or below the damp proof course, internally or externally. Enviroblock has been awarded the BRE's 'Responsible Sourcing' certificate, which is given to products that demonstrate environmental and social responsibility.

On summer nights, the building's ventilation system purges heat from the masonry elements to cool the building for the next morning.

The building is naturally ventilated during the day in summer, with the MVHR set to summer bypass mode to maintain extract requirements from toilets, and cooling the building at night if needed. “The natural ventilation strategy in summer has worked well to reduce operational energy use,” says Williamson, “particularly now the occupants are confident in its use.”

Williamson considered ventilating the building naturally with automated windows, but says this would have been ineffective on windless days, and expensive. So instead the building is ventilated by five Drexel & Weiss heat recovery ventilation units - comprising three decentralised and two centralised units. “They’re not certified yet, but they’ve been used successfully in many certified passive house schools and offices,” says Williamson.

While the core of the building is masonry, the thermal envelope is constructed from timber frame that sits on a thermal block -built plinth, together with an I-beam cassette roof. The timber frame elements are insulated with Warmcel cellulose, which is made from recycled newspaper made in Wales, installed by Powys-based firm Pen Y Coed.

Williamson says he particularly likes Warmcel for its hygroscopic buffering and excellent decrement delay attributes. u
The south-facing roof slope features a 7kW photovoltaic array, supplied by Dulas, that produces 25% of the building's electricity. The north slope features a biodiverse roof sown with local wildflowers, designed in conjunction with local wildlife groups.

Williamson says the sedum roof offers excellent decrement delay too. "It really helps with keeping the building cool," he says.
The dilapidated 1850s building that previously occupied the site was demolished, but its roof slates & cills were incorporated into Canolfan Hyddgen's roof, while the old building's walls were crushed and used in the construction of new drainage systems and hard landscaping.

Canolfan Hyddgen also smashed the passive house airtightness standard of 0.6 air changes per hour with a score of 0.25. The thermal envelope was made airtight using Pro Clima Intello Plus 'intelligent' vapour checks in conjunction with Pro Clima tapes and glues, all supplied by Irish company Ecological Building Systems.

But despite the runaway success of the project — it was the first building in the world to achieve passive house and BREEAM certification simultaneously — Williamson says some lessons were learned. 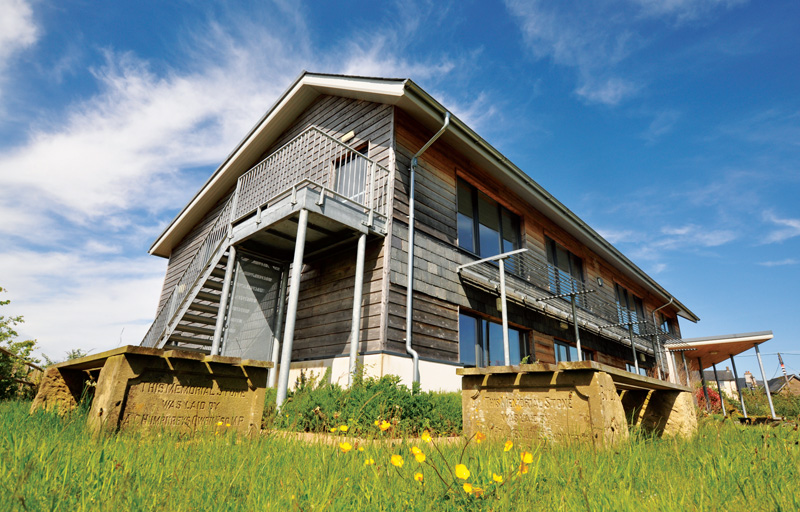 The building is clad in locally sourced European larch

For one, establishing a building's IT strategy at the outset is crucial. Late in the design phase Powys County Council appended a server room to the plans, which added 720 watts of heat. This demanded some late design tweaks to prevent overheating, such as adding a second brise soleil above the ground floor on the south façade and redesigning summer extraction ducts to the server room.

The cost of the build ended up at £1,537 per square metre — not including the PV, biodiverse roof and canopy — and £1,784 when these are included.

But the proof of the building's success is comfort: Williamson says that during recent cold winters, staff at Canolfan Hyddgen "couldn't wait to get into work".

Though the building is four years old it only entered the UK Passivhaus Awards this year, as real-world monitoring data is required for entry. And it emerged victorious in the non-domestic category, beating strong competition from both the Green Base community centre on Merseyside and the new offices of construction firm Interserve, two other flagship passive house projects. The project had previously won a Welsh Local Government Association sustainability award, and a CIBSE new build of the year prize.

Speaking at this year's Passivhaus Awards, Williamson praised the Passivhaus Trust for creating awards that recognised both energy efficiency and aesthetics.

He said: "We hope such successful examples of passive house will inspire others to adopt and engage with this proven approach to low energy buildings.”