A new timber frame house in Co Cork doesn't just meet the passive house standard, it does so for an impressive price.

Whenever people discuss the cost of a passive house, they usually debate how much more expensive it will be than conventional build, or how long it will take for the low heating bills to compensate for the extra capital cost.

But this detached passive house in Douglas, Co Cork is different — its designer Deborah Byrne says that, at €109 per square foot, it cost less than a typical Irish home built just to comply with the building regulations. 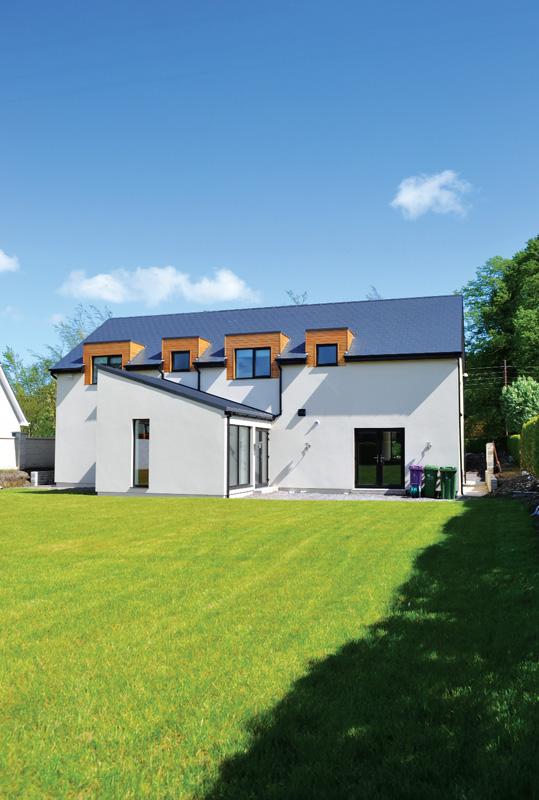 Byrne, an Irish engineer and passive house designer who has since relocated to Canada, became the project manager for this self-build project when a friend of hers who had initially taken it on decided to return to education. Her clients, James McSweeney and Breffni Noone, had acquired the site from James's parents.

"Having grown-up here, I was really enthusiastic about being able to build a house in Douglas and even more so, being able to build on my family property," James wrote in an email to Passive House Plus. The couple had been saving money to build, and by 2012 they had raised enough funds — and construction costs had reduced sufficiently post-boom — that they were ready to get started.

Deborah, who became both designer and project manager, asked James and Breffni to think about upgrading the spec to meet the passive house standard. 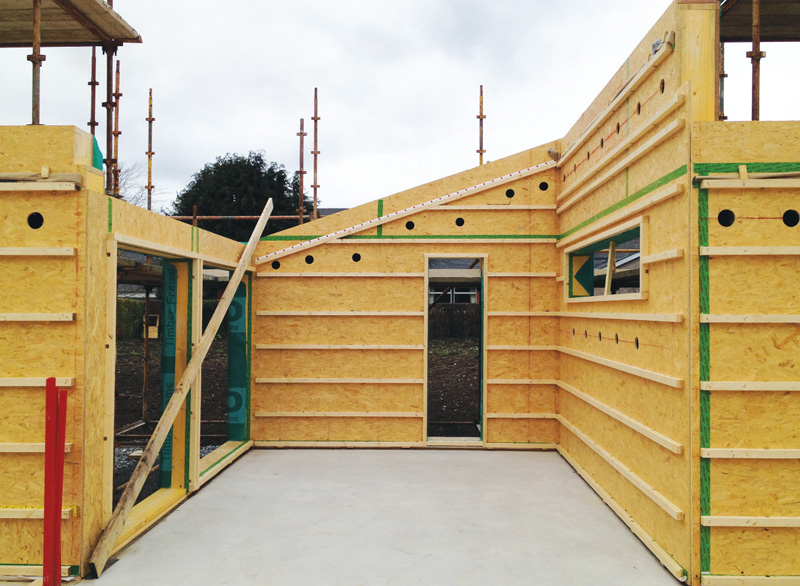 The timber frame structure in place, which was built by Eco Homes in their nearby Carrigaline factory

"We were not initially thinking of going down the route of building a passive home, mainly because, like so many other self-builders out there, we had thought that a low energy home would be very expensive to build," James says. "However during our first meeting with Deborah, she brought us through the pricing and logistics of a passive home and we were sold. Primarily, we were attracted to the concept of a low energy home by the positive impact on both the environment and our wallet – it seems like a win-win scenario."

But aiming for the passive house standard meant redesigning the house and re-applying for planning permission because, to take one example, the walls would have to be much thicker. This ended up delaying the project by six months. 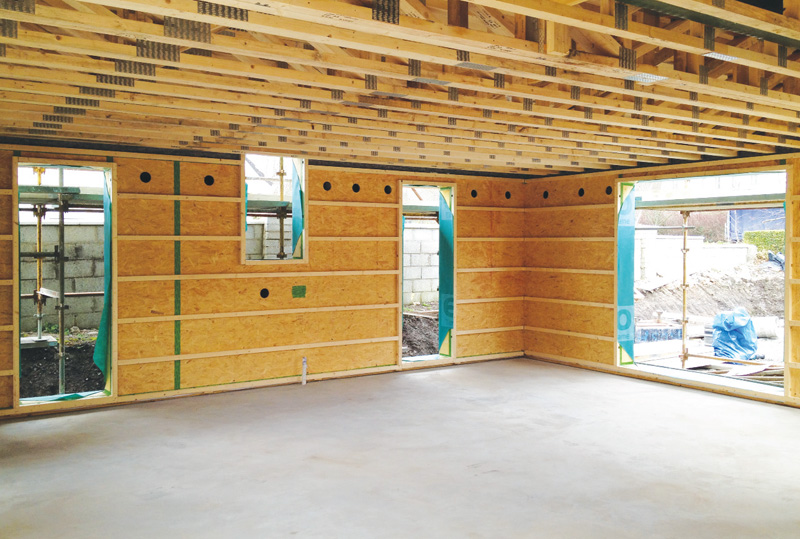 Deborah went to tender for a contractor, but her clients had a strict budget and she wasn't impressed with the prices. So she decided to act as on-site construction manager herself.

She wanted to build with timber frame but didn't think she'd be able to afford to until the bids came in, and she chose Cork-based timber frame manufacturer Eco Homes, who at the time of writing are on site building a passive house in Surrey.

James and Breffni hadn't considered timber frame initially, but they were impressed with the speed of build it offered, and by the cost too.

"It was apparent as soon as we started discussing the project with [Deborah] that cost and the overall budget were extremely important," says Stephen Spillane of Eco Homes. "It just meant that we had to be very sure of our pricing."

Eco Homes started by laying the Supergrund foundation, which is insulated with 300mm of EPS rigid foam, and built the timber-frame structure in their Carrigaline factory.

The walls are insulated with 235mm of Isocell cellulose insulation, with an extra 50mm of Rockwool in the service cavity. The taped-and-sealed OSB layer serves as the airtight layer, while externally the walls are finished with Limerick-based supplier Greenspan’s Aquapanel cement board system — a product with a much lower carbon footprint than concrete blocks. 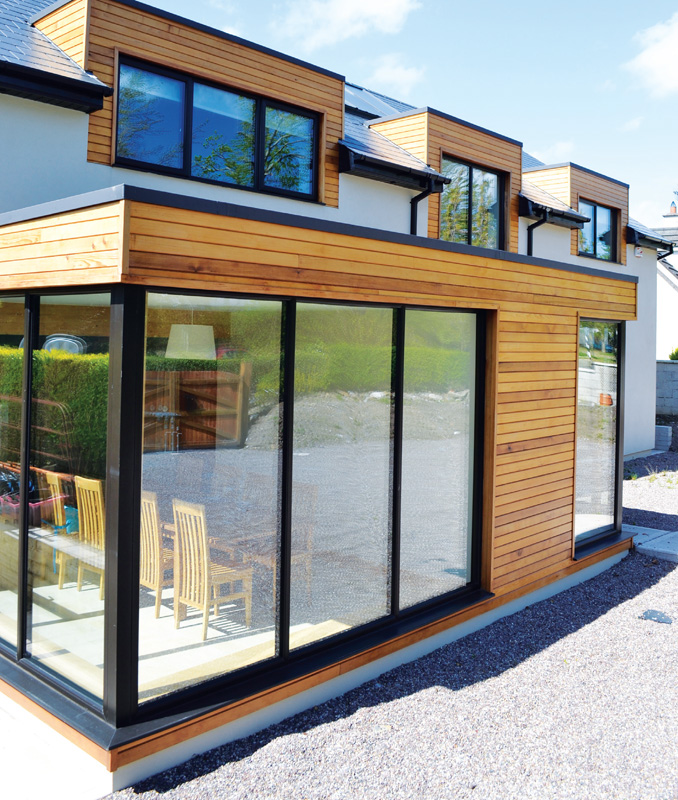 The large triple-glazed windows allow a lot of light into the house and, along with the entry door, are all passive house certified

The roof features 400mm of Isocell with an airtightness membrane, and is finished externally with fibre cement slates. The house's triple-glazed PVC windows are from Munster Joinery, one of the Cork-based manufacturers five certified passive house window ranges.

"The large triple-glazed windows…are great at allowing a lot of radiant heat into the house, but also a lot of natural light," James says.

A four metre square solar collector provides hot water, supplemented by a gas boiler that also provides space heating — though there is no central heating, only a few towel radiators in the bathrooms.

The first airtightness test on the house produced a result of 0.27 air changes per hour — more than twice as good as the passive house standard of 0.6. After the first fix of services, the final result dropped to 0.33 — still a formidable achievement.

But while the house meets all the usual tough energy demands of the passive house standard — highly insulated, airtight, thermal bridge free — Deborah believes its crowning achievement is the price.

"For me the exciting part was the cost," she says.

Deborah says the key to keeping the cost down was constantly watching the project spend, and always shopping around. She gives the cedar cladding at the front of the house as an example of how attention to detail and clever thinking helped to reign in the cost.

"Just by agreeing how we cut it we saved 30% on the timber," she says.

The house, interior fit-out and landscaping cost €294,000 — or €109 per square foot. That includes "blinds on the windows, carpets on the floor and beds dressed," Deborah says.

For comparison, she says the calculator on the Society of Chartered Surveyors Ireland website estimates the cost of this project at €124 per square foot — though this includes a hypothetical demolition (there was none here) but doesn't include loose furnishings or site works, so it isn't directly comparable. But she says €115 per square foot is a typical figure for conventional build.

James and Breffni are really pleased with the finished house. "Deborah oversaw the complete project and did an excellent job of managing all the contractors and amazingly brought the project in on time and within budget," James says.

He and Breffni both wanted an open plan, but there was a concern this would make it more difficult for the house to retain heat. But he says the temperature is comfortable throughout the house.

"We are still getting used to the house and how it works, but the whole experience of self-building has been very positive for us."

"It feels good to know that it is possible to build a low energy home that actually has equal or greater comfort levels than conventional homes and with comparable or lower building costs."

"We would strongly encourage any would-be self-builders out there to investigate the feasibility of building a passive home – but get yourself a project manager that knows the space – this is key."

Budget: €294,000 for building and interior fitout including Vat. €340,000 if you include including capital contributions and soft costs such as design, legal, consultation and professional fees