Motivated by the experience of building and living in a passive house, one of Ireland’s leading political figures has become a public advocate for the standard. Passive House Plus visited the house to find out why.

Former president of the European Parliament Pat Cox has perhaps become Ireland’s most high profile ambassador for the passive house standard over the last few years. The former MEP and TD moved into his own passive house in Blackrock, Co Dublin last year, and his experience of the design and construction process — and of living in the house — has driven him to become an advocate for the low energy standard.

After moving back to Dublin from Cork, where he had lived during his time as an MEP, Cox and his wife Cathy wanted to upgrade their semi-detached home. They hired an architect and received planning permission for a partial upgrade and rebuild of the house. 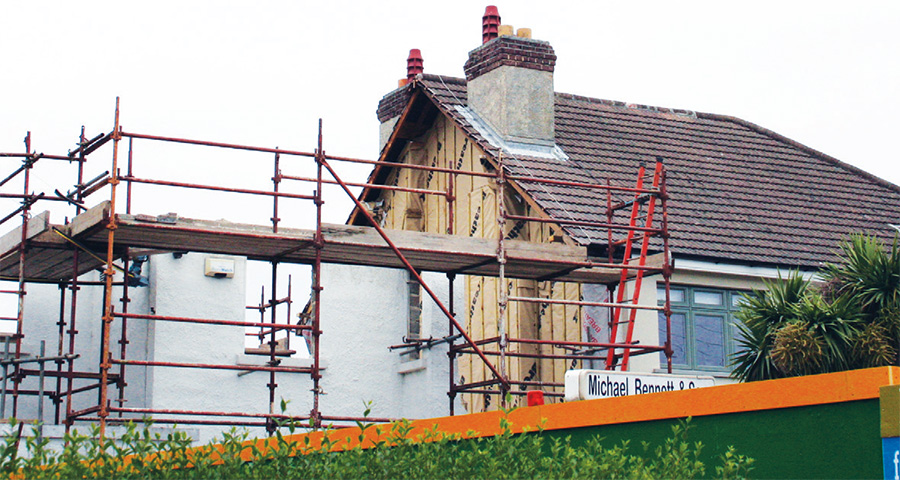 They sat on the plans for a few years, then went out to tender for a contractor. One of the bids that came back was from Michael Bennett & Sons, the builder and developer behind the Isover Ireland Energy Efficiency Award-winning Grange Lough passive house scheme in Rosslare, Co Wexford. Michael Bennett introduced the idea of passive house to the couple. “I had a very open mind to it. It was a term that I’d heard but I didn’t really know what it was,” Pat Cox says.

Bennett brought them to see the Rosslare project, and to visit Tomás O’Leary’s passive house in Wicklow, which was the first passive house built in Ireland, back in 2005. Cox says: “And then we decided okay, in principle, let’s go for it.”

But aiming for passive house was a leap of faith and a test of patience, because it meant designing a new dwelling from scratch, going back for planning permission, and demolishing the existing house — all of which was going to delay the build by a further six months. Tomás O’Leary’s architectural practice MosArt was charged with designing the new home. 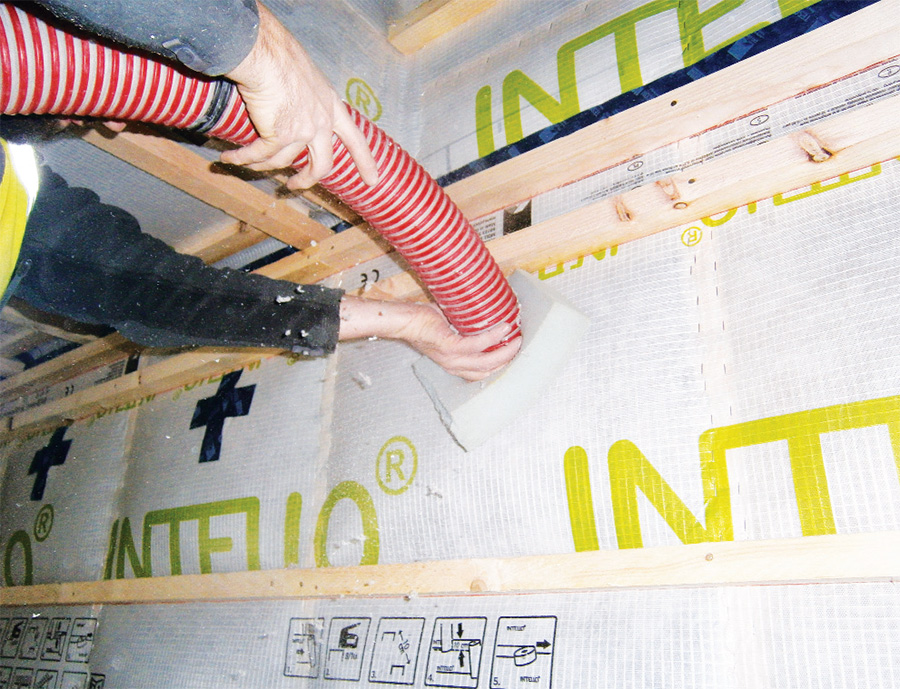 Cellulose insulation is pumped into the timber frame walls

Michael Bennett says: “We asked Pat to do something very big, and at times now I shiver a bit. We asked him to redesign his house completely and go back through planning.” Work began on site in July 2013, led by foreman Willie Burke. Knocking one half of two semidetached homes obviously demanded the total trust and faith of the neighbours.

“I was thinking, I’ve never done this before with anybody — how’s it going to work?” says project architect Art McCormack of MosArt. “But it worked, because [Bennetts] knew how to do it technically, but also because of the rigour and the procedure on site.”

The unusual nature of the site meant that, once the old house was demolished, the next item on the to-do list was the landscaping. The back garden slopes steeply down to Dublin Bay, and there is no access from the back, so the team was able to use the time between the demolition of one house and the construction of the next to bring landscaping equipment in through the front. 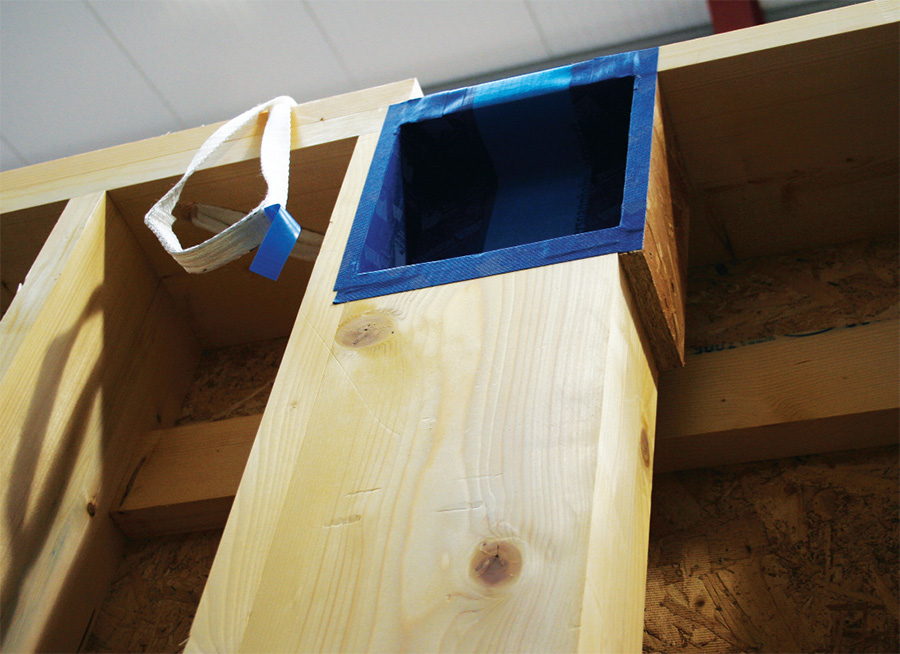 An airtight box for electrics

For Art McCormack, who is both an architect and a landscape architect, the project presented a unique opportunity to design a house and garden together. The challenge, he says, was “to make sure that both were of equal quality”.

The back garden now consists of a winding path that descends steeply through a series of a planted terraces to a small gazebo overlooking the bay, making the most of a fairly small space.

With the garden finished, the timber frame — built by Wexford-based Shoalwater Timber Frame — arrived on site in October 2013, and the structure was up and weather-proofed by Christmas. The Coxes moved in during April 2014. “So it was an extremely efficient build,” Pat Cox says. 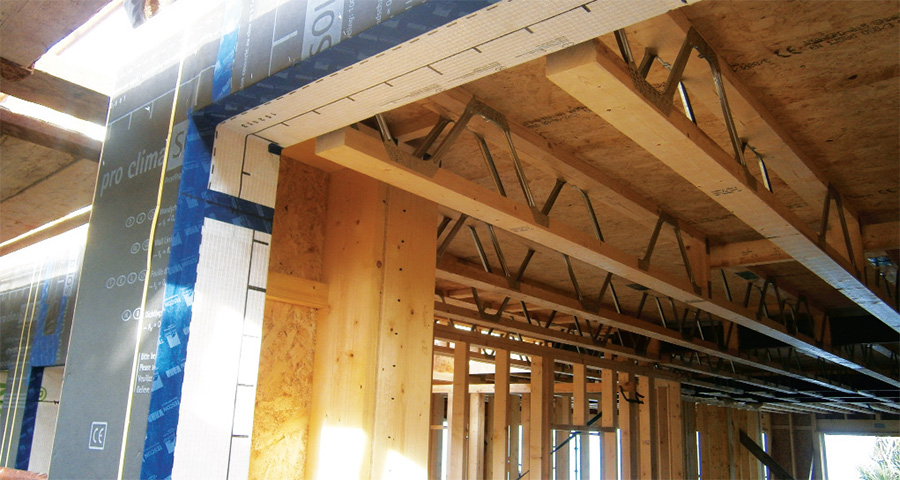 The timber frame is insulated with cellulose, plus glass wool in the service cavities. The pitched roof has an additional 80mm of wood fibre insulation over the rafters too, while the flat roofed terrace is insulated completely with glass wool.

The windows are Munster Joinery Passiv uPVC units, certified by the Passive House Institute, and manufactured at Munster’s plant at Ballydesmond, Co Cork. Bennetts also used these windows on the Grange Lough project in Rosslare. “We’ve got very comfortable with the product we know what to expect, we know it’s going to perform,” Michael Bennett says. Meanwhile, Pro Clima Intello intelligent vapour barriers, supplied by Ecological Building Systems, form the airtight layer for the walls and roof.

Engineer Niall Crosson of Ecological says that when he first visited the site, he was skeptical about whether the house could get over the passive house target of 0.6 air changes per hour, because of how complex the building is, and the sheer number of junctions. 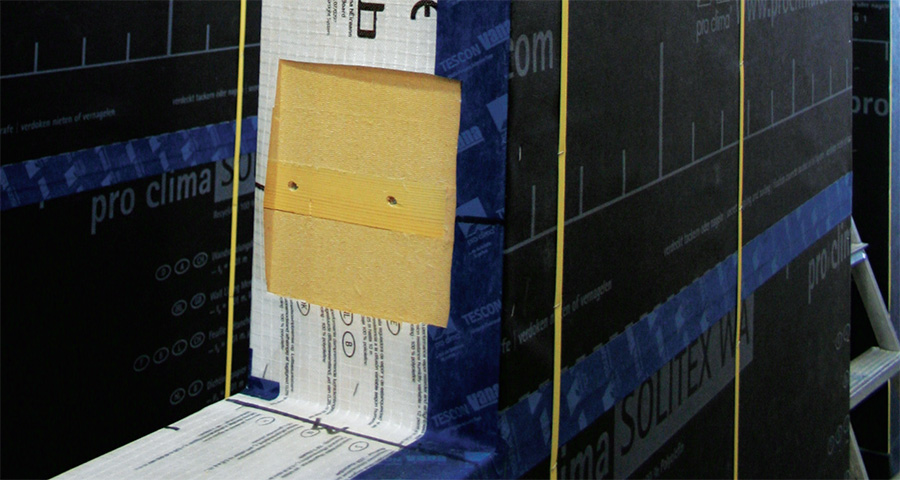 “The form of this construction is actually quite complex,” he says. Crosson credits the workmanship and teamwork on site, and the quality of the materials, with the fact the building easily met the passive house airtightness target. “I just thought it was phenomenal given the complexity,” he says.

One way Bennetts helped to ensure airtightness was by putting up a noticeboard on site — any time someone put a hole in the airtight layer, they had to record it for the whole team to see. “If anything happened – either deliberate or otherwise – it was acknowledged and dealt with,” Michael Bennett says.

As usual with a passive house, good communication was key to the project’s success. The whole team met on site with the clients once every two weeks. MosArt architectural technician Jill Noctor kept minutes of the meetings, and held everyone to account. “We left as clients with a lot of homework to do every time we had a meeting, because there were always choices,” Pat Cox says. “That intensity of contact pays back as well, because there’s a constant open communication flowing all the time.”

Michael Bennett adds: “I think that’s the secret. One of the rules that we have, and we stick rigidly by it, is every two weeks we have a meeting. We look to have the owner, or whoever is going to live in the house, with us all the way.”

He adds: “We walk away when we’re finished, and these are the people who have to live in it. 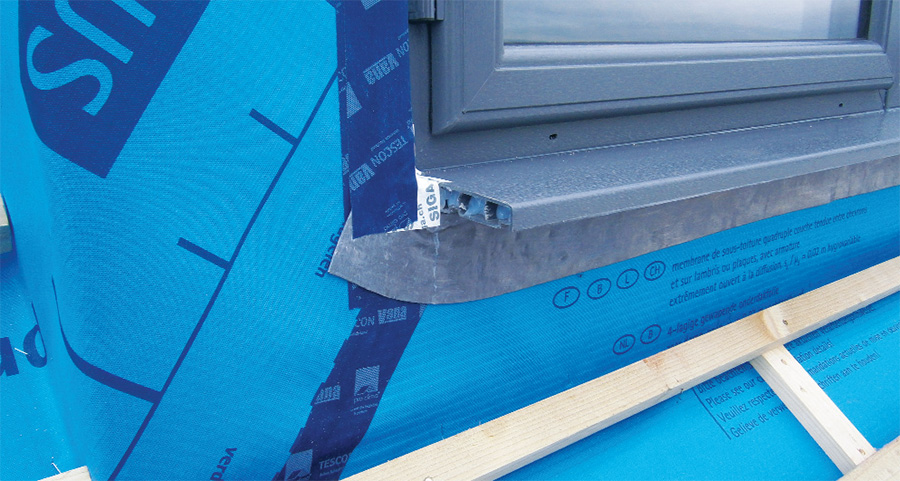 Wind-tightness detailing around windows and the insulated window cills

Cox was most impressed by the huge attention to detail paid by everyone on site — it reminded him of hi-tech manufacturing facilities he visited during his time as a politician. “The only place where I’ve seen quality control of this sort is in world class manufacturing plant,” Cox says. “When I saw that here, it reminded me of visits I made to really world class plants. It was I guess, in some ways, the last thing I was expecting with someone doing a construction job on a site.”

The house comfortably passed its airtightness test on the first go, coming in under 0.3 air changes per hour, though it ended up at 0.4 after further work on site. The Shoalwater team, led by Donal Mullins, was confident it would hit the mark, as they had been conducting their own airtightness tests all along.

Cox says the detailed attention to airtightness paid off in other areas too. “It’s interesting that the quality spillover isn’t just about getting the airtightness. People are so into quality, that they’re getting everything right first time up, which is a fantastic experience if you’re on the customer side of the equation,” he says.

The house is heated very simply, by a Greenstar condensing gas boiler delivering hot water to two radiators — one in the hall and one in the sitting room. Meanwhile solar vacuum tubes on the south-facing front roof provide a good chunk of the hot water demand.

When Passive House Plus spoke to Cox in November of 2014, he had only turned the boiler on once to check it was working — but he had to turn it off when the house got too hot. There’s also a Dantherm mechanical heat recovery ventilation system, certified by the Passive House Institute. 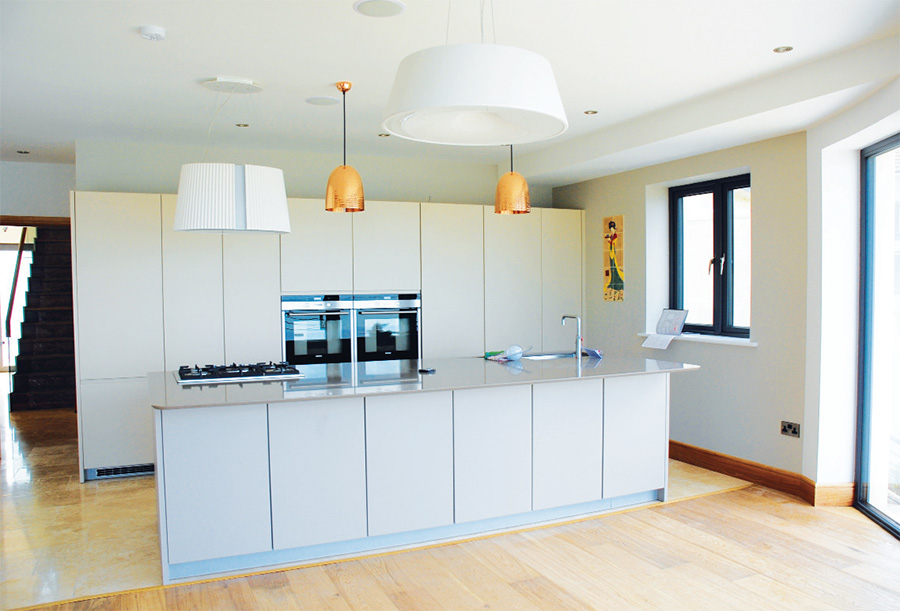 “I was pleasantly surprised how quickly we were living in the house. When you saw a hole in ground in October, and that you’re actually living in a fully completed passive house in April, it is a seriously good turnaround,” Cox says.

“Our strong feeling at the end of it is that we’re the beneficiaries of the delays. What we’ve got is such a comfortable house to live in. We’re sat with doors everywhere open and there are no draughts.”

Perhaps not surprisingly, Cox has become a public supporter of the passive house standard over the last couple years. He even addressed the International Passive House Conference in Aachen, Germany last year. And speaking later in the year at See The Light, the Passive House Association of Ireland’s annual conference, he called on Ireland to make passive house a national building standard.

“The time has come in Ireland for passive house standards to move from the margins to the mainstream, for building policy and its energy efficiency to become more active by becoming more passive,” he said.

He elaborated on this by saying the passive house standard should be recognised as an alternative means of complying with Part L of the Irish building regulations.

He continued: “Ireland has the necessary design and construction skills to succeed. I know, having walked the walk and moved into a passive house last April. I know the attention to detail, the quality of the process from concept to delivery and the third party independent validation procedures as to standards that are an intrinsic part of the construction process.”

“My call today is for Ireland to get more active on climate change by becoming more passive in building standards. Is anyone listening? Will an Irish city or county or the state finally see what so many others elsewhere can see and appreciate.” 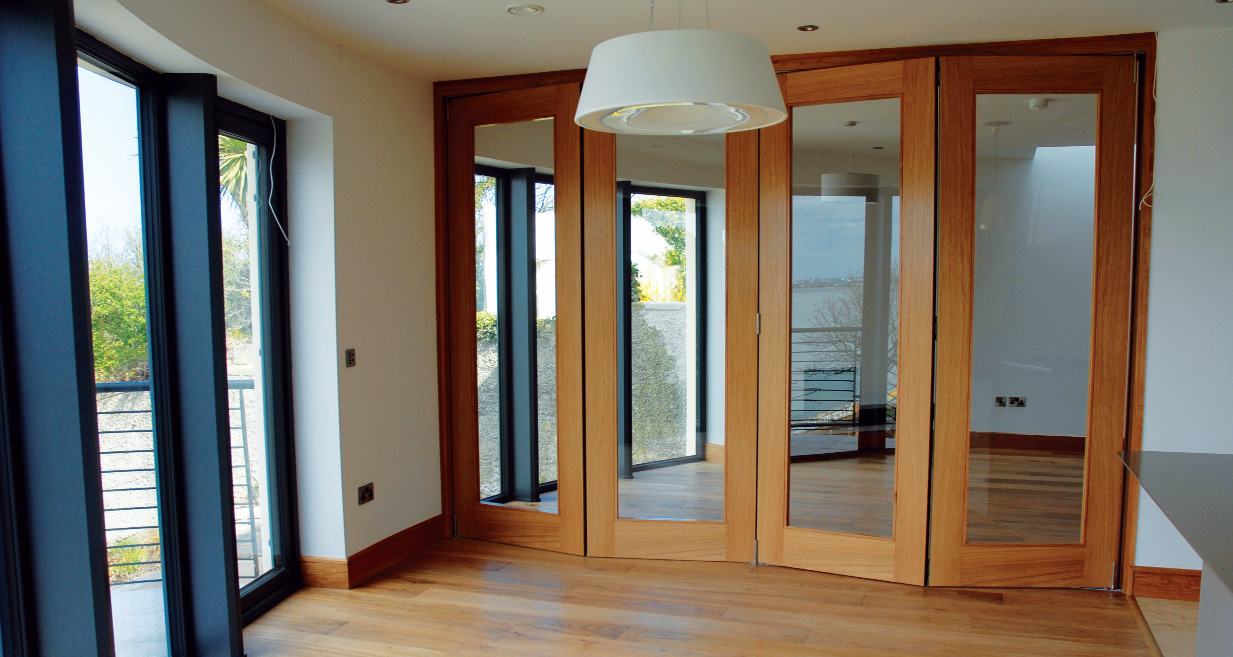 He elaborated on this when Passive House Plus visited his house in November. He said that what struck him at the International Passive House Conference in Germany was the sheer number of small and medium sized enterprises exhibiting. “It has spawned a whole industrial base,” he says — and it could do the same for Ireland.

He adds: “Whichever English speaking state gives itself first mover advantage in [passive house], I actually think it will become a go-to place. And the amount of spin-off to do with small and medium enterprise, could be really, really large.”

Building type: Semi-detached 242 square metre timber-frame dwelling on the site of existing house, which was demolished. The dwelling comprises two-storeys plus (dormer) attic with the ridge level to match previous dwelling.

Thermal bridging: details were designed as thermal bridge free, so no Therm calcs were carried out for this project. In PHPP an average of 0.01 W/mK thermal bridge is what Mosart estimate.