When passive house specialist Garrett Quinn of design-and-build practice GP Developments set out to build a home for his parents, he was very careful to avoid the passive house design clichés. This would not be a square, compact building with minimalist styling. In fact, the aesthetic would ignore all of that and take its references solely from the surrounding environment.

“I knew the site would work because the topography and shading were in our favour with tall trees to the north and smaller hedges to the south,” he says, “so it had a fairly good aspect, but I wanted to be sure that my parents weren’t going to be constrained in any way.” As architect Damien McLaughlin of Studio Rogers worked through the design issues with the client, Quinn kept in touch but didn’t interfere. 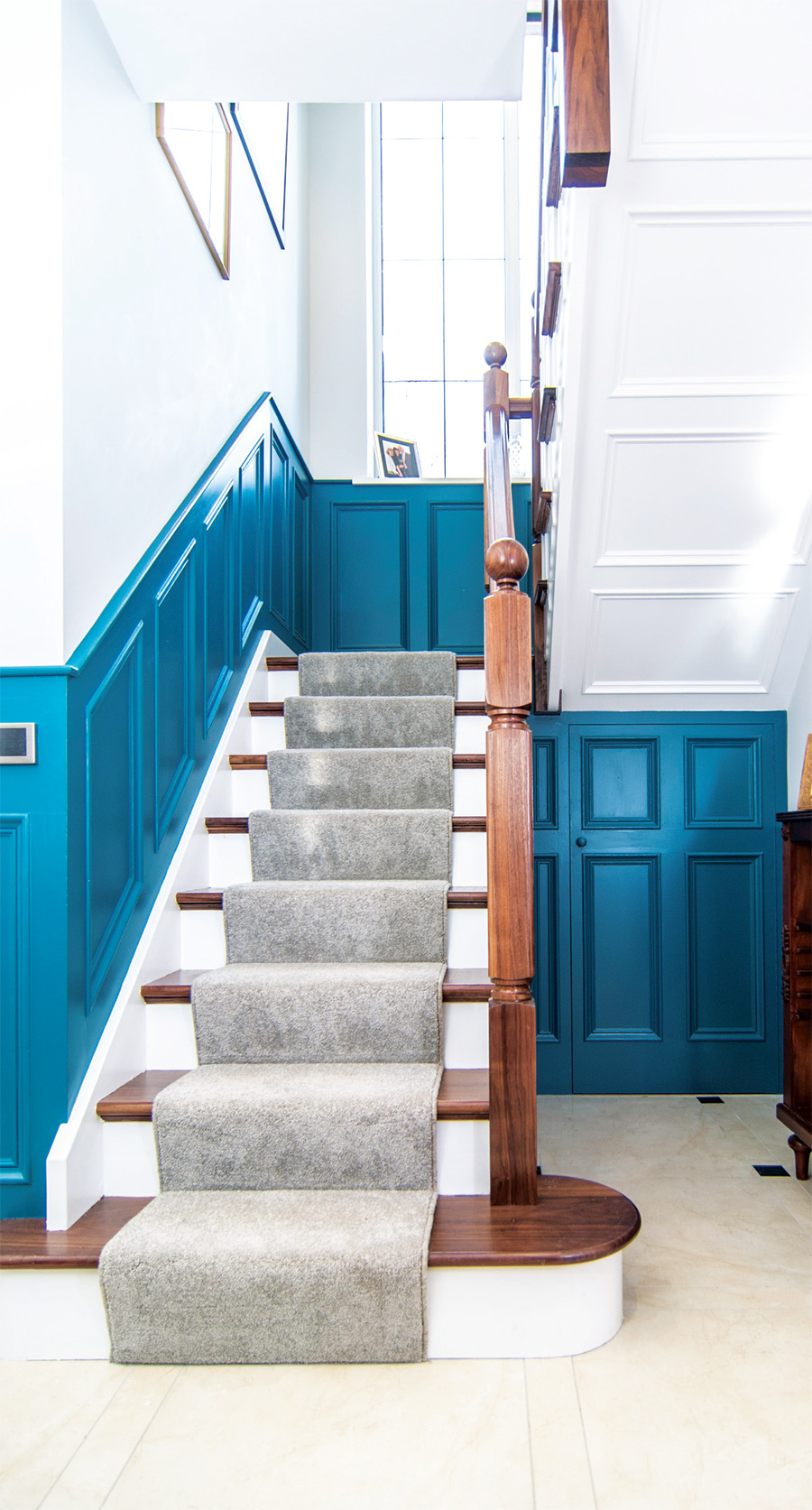 The design which they finally settled on owed a lot to the Arts-and-Crafts era houses found in this part of Dungannon. Featuring high, pointed gables with complex junctions and a distributed footprint, it’s about as far from the contemporary German box as you can get.

Though this was his first passive house, Quinn was delighted with the design and the challenge it presented. “I wanted to show that we didn’t need to be simple about things, that we could use what was being taught about passive house to be more adventurous. I was confident I could square the circle.” The only change he sought before planning was a 200mm reduction in the size of one north elevation window. 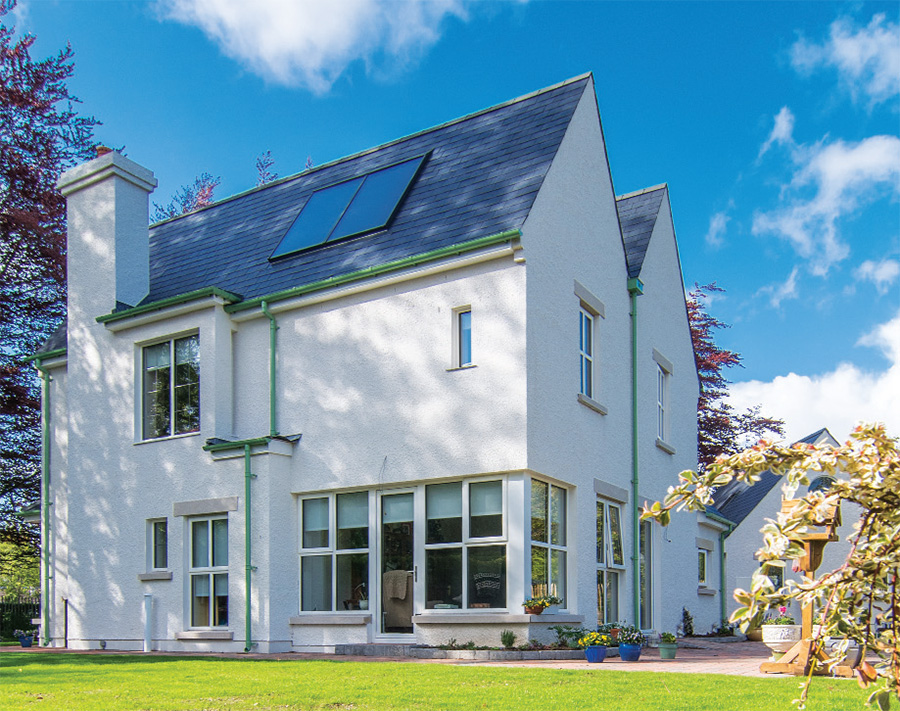 Quinn used the passive house software, PHPP, to work through the design and discover the right combination of fabrics and techniques to get all of the variables working within passive house thresholds. To compensate for the complexity of the build, he found he had to bulk up the insulation in key areas. “We have a lot more insulation in the building than we said we would at design approval stage, purely because of the irregular shape.” As a result the walls are up to 470mm deep.

An engineer by profession, Quinn went back to school after the construction crash and did a postgrad in renewable energies at the University of Ulster in Jordanstown. It was while working through the green building module that he discovered passive house, and became a convert overnight. 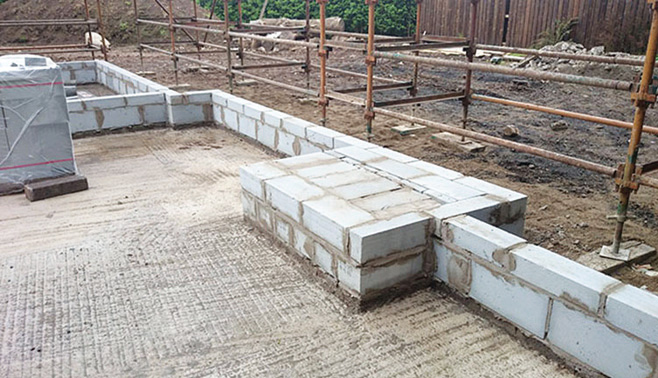 “I knew the way we were building was inherently wrong. There were key things that no one thought about and I was very frustrated with the contradictions in the building regulations. There was no joined up thinking.” In particular, he found the regs in relation to airtightness ridiculously lax. As it stands, new builds in Northern Ireland require an airtightness rate of just 10 m3/hr/m2 at 50 Pa, which translates to roughly 15 times leakier than the passive house standard.1 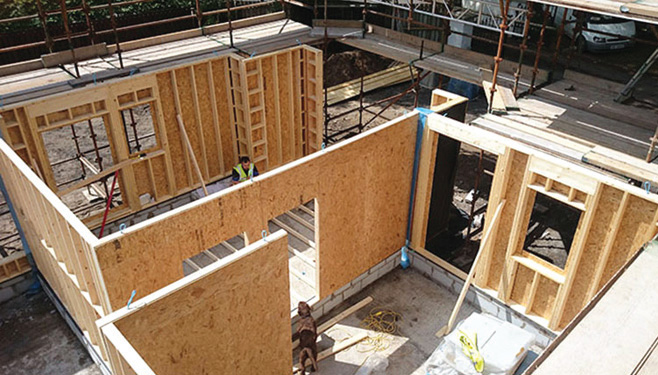 A timber frame system from Setanta Construction was chosen primarily for airtightness purposes. At the time, Quinn felt that timber frame would make it easier to hit the 0.6 air changes per hour (ACH) that passive house requires. The kit also came with ‘Easi-Joists’, a system which makes it easy for threading services through voids, especially ventilation ductwork.

Understanding just how important craftsmanship and professionalism is when aiming for passive standard airtightness, Quinn says he went through three different squads of joiners before he found a team he was confident could deliver the results he needed. Even then, close policing onsite was vital. 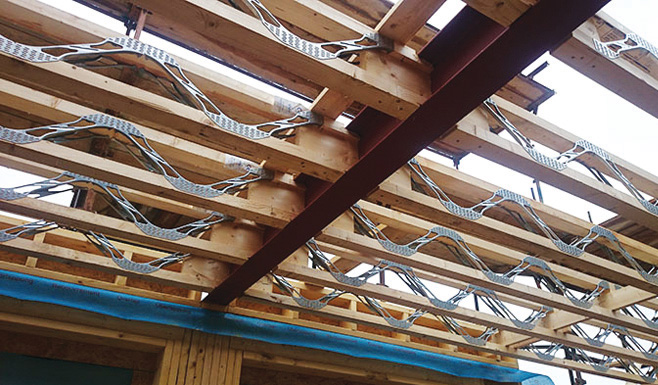 As any passive house builder will tell you, getting below the 0.6 ACH threshold for the first time is as tricky as it is nerve-wracking. Despite Quinn’s confidence, the first test revealed problems in the chimney breast, which had been constructed before the timber frame was in place, and before everyone fully understood what would be required to hit the target. With the help of Mark Gribben of Setanta Construction the problem was overcome by ‘wrapping it like a parcel’ and excluding it from the air test.

Ultimately, the attention to detail and remedial action around the chimney breast paid off. The second airtightness test recorded an ACH of 0.55, well inside the 0.6 target. “I’m extremely proud of that,” says Quinn. The result is equivalent to 0.429m3/m2/hr, roughly 23 times better than building regulations, he says. 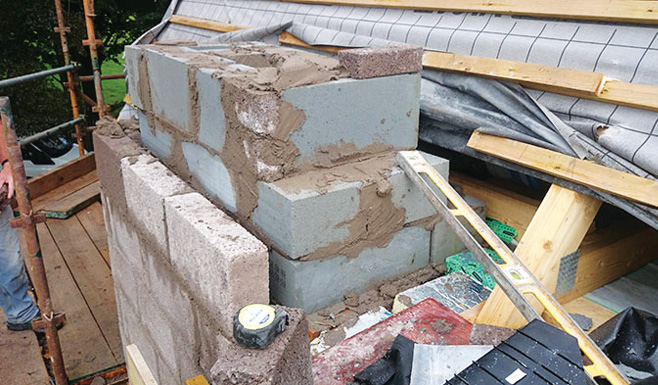 Just as he wanted to demonstrate that it was possible to make any home passive, he also wanted to show that you don’t need obscure materials to do it. “Bar a couple of items, we can use the components on the shelves of our local builder suppliers to create a passive house,” he says, “another myth dispelled.”

Quinn originally specified Foamglas blocks to tackle thermal bridging at the footings, but they weren’t readily available. Instead he went with Quinn Lite thermal blocks. They worked out perfectly, and have been used on all of Quinn’s subsequent builds. 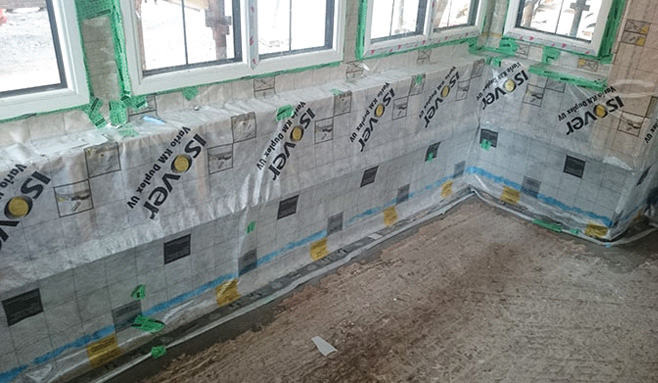 He points out that this key junction is systematically overlooked in conventional houses. “When you have a thermal camera in your hand and you see a building that appears well built, you can see exactly where the heat is leaking out. It’s amazing how some of what we think of as our best buildings are actually poorly constructed.”

One other interesting feature of this project was the client’s insistence on installing an Aga range. “It was bought,” says Quinn, “before the foundations were laid.”

Keeping the range within the house’s energy budget gave Quinn another ball to juggle. It helped that the client opted for an Aga Total Control – an electric version of the iconic range – as opposed to the traditional solid fuel version. “We are able to control how much energy it uses, and keep within our primary energy tolerance, but it’s actually proven to be a great asset in the house. On the coldest days, there is this extra heat source that can be turned on if necessary.”

Solar overheating is also a risk. The design team was, however, keen to keep the exterior free of the kinds of louvres and brise soleil that would wreck the house’s carefully finessed aesthetic. Instead, the design included a strategically placed pergola with the kind of seasonal vegetation that will deliver shading in the summer but wouldn’t compromise solar gains in the winter.

For the moment however, Quinn is monitoring conditions in the house to see how Aga heat and solar gains combine as the summer approaches. 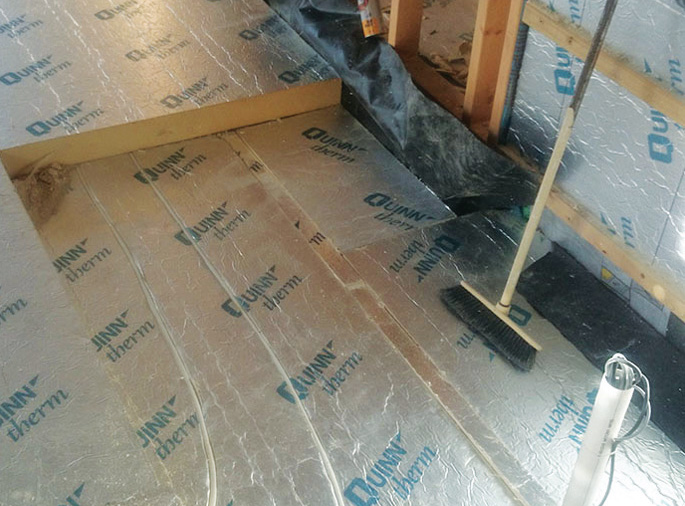 The ground floor is insulated with 370mm of QuinnTherm PIR insulation

The client has been in the house since Christmas and so far, so great. Temperatures are comfortable and even, and air quality is perfect. In order to minimise the control interface, the house is broken into two zones, upstairs and downstairs, each controlled by a simple, wall-mounted digital stat. If the temperature drops below the set point, a motorised valve releases hot water from the solar array to the ventilation system. A condensing oil boiler provides back up. 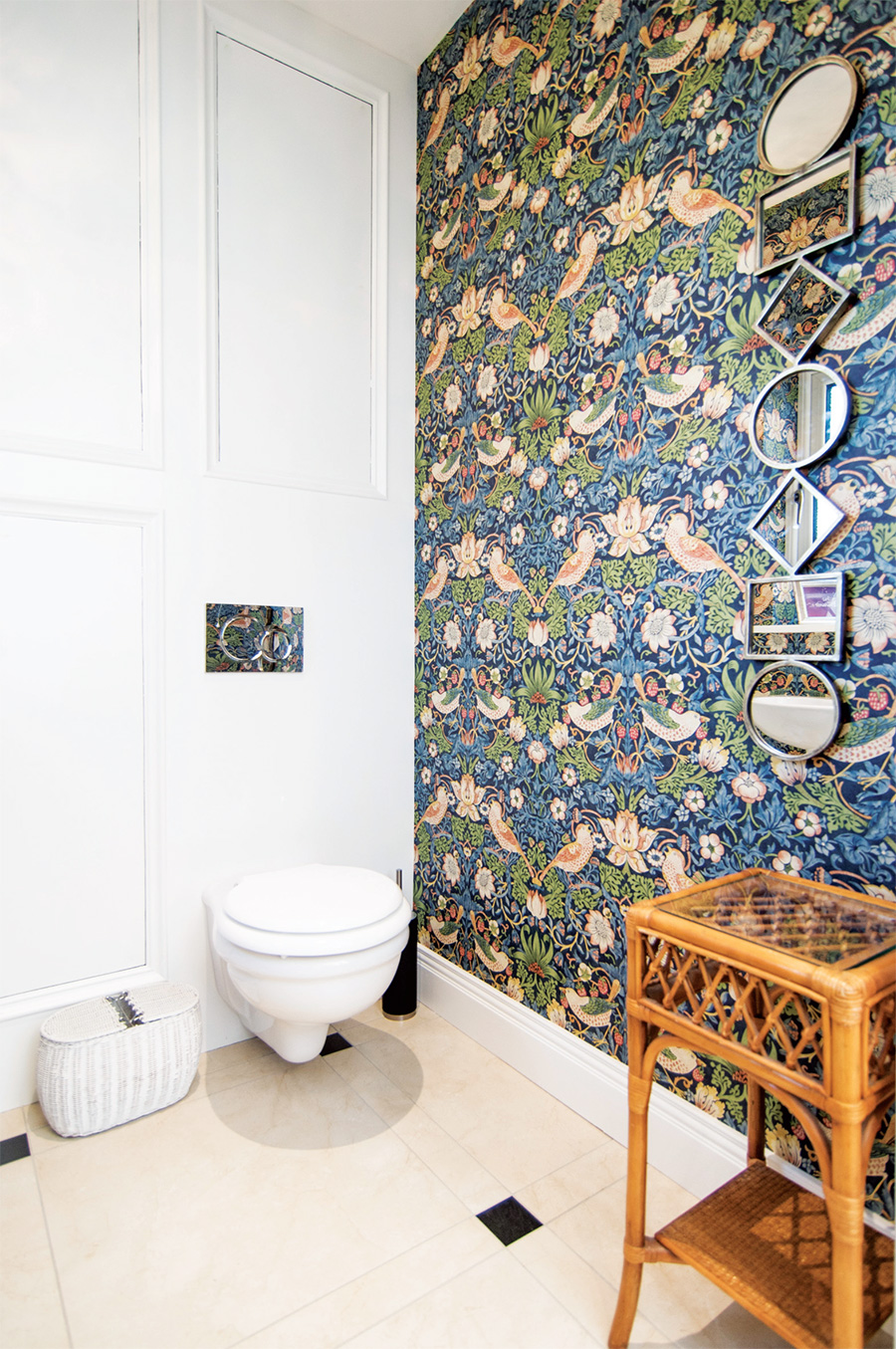 “The only thing that they control really is the ventilation system,” says Quinn. “If they have a few people over, they’ll boost it and if they’re going to be away, they’ll put it to an unoccupied setting. Apart from that it’s automated. They’ll always have fresh air in the room, at whatever temperature they want. They’re the only controls they want or need.” 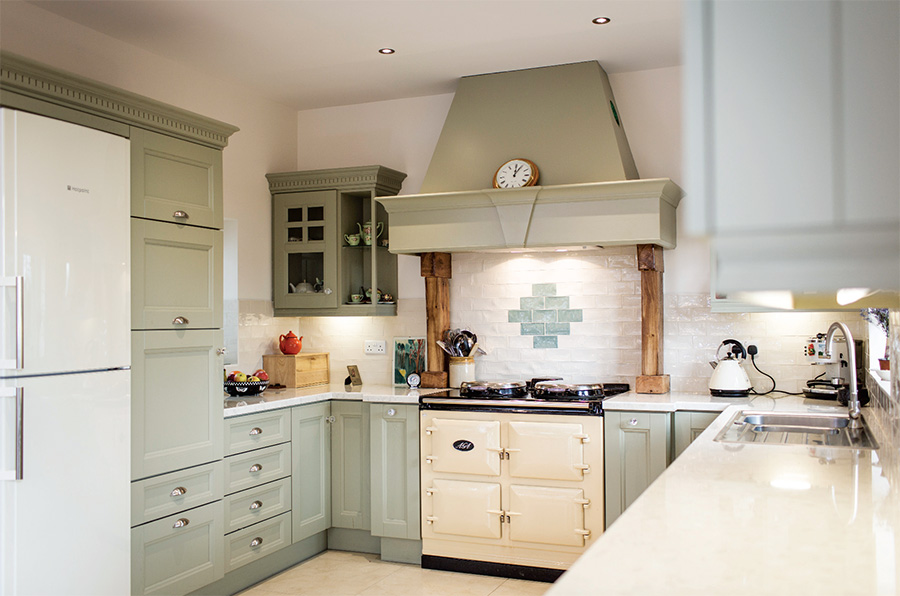 1A direct comparison is tricky because building regulations throughout Ireland and the UK express airtightness in terms of the q50 value (m3/mhr/m2 @ 50 Pa), whereas passive house requires an n50 value (ACH @ 50 Pa). The resulting numbers can vary wildly for larger and more complex buildings, but for typical dwellings they’ll tend to be close – so a house that hits 10 m3/hr/m2 @50 Pa is likely to be close to 10 ACH @ 50 Pa. To explain quite how bad that figure is, it means that with all vents closed, the leakage via the structure is so bad that one complete air change in the house occurs every six minutes at 50 Pascals of pressure (roughly equivalent to 20 mph winds hitting each side of the house). 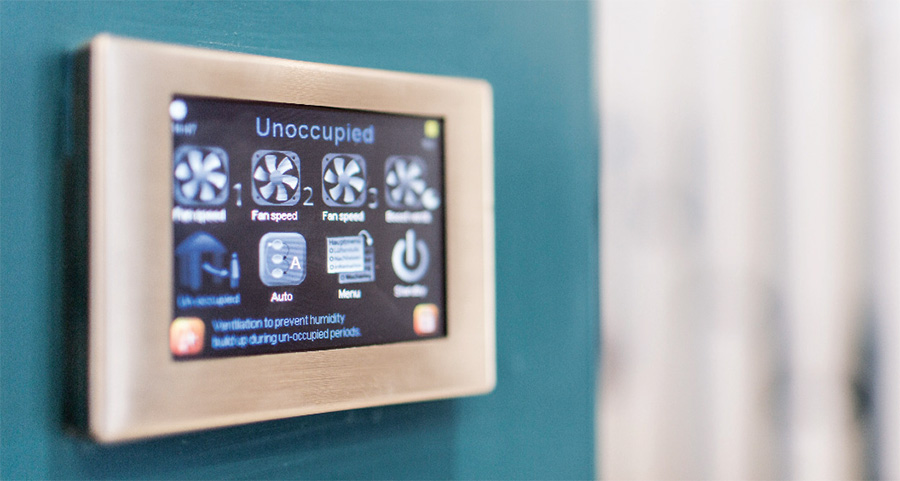