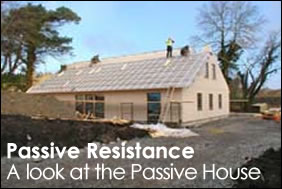 On Tuesday the 15th of March a passive house, a house that does not need to be heated, was built a few miles outside of Galway. The brain child of Lars Pettersson of Galway based Scandinavian Homes Ltd, it is believed to be the world’s first standardized and factory made passive house. The 2,500 sq ft passive house in Moycullen, which will be made available for the public to visit to experience the almost unbelievable concept of a house without heat, is the product of an emerging shift towards energy efficiency and improved comfort standards, as Peterson reveals.

Having said this, will the number of passive and low-energy houses increase dramatically in the coming years? In Germany, experts predict a substantial development in the passive and low-energy house market. In a survey conducted in 2004 among 180 architects, engineers and house-manufacturers it was estimated that on average, nearly every fifth new building will be a passive house, and every third building a Low-energy house by the year 2010. There are few reasons not to build all new houses to the passive-house standard or at least to the low-energy-house standard. The advantages are so clear, provided that the building costs are manageable, with low or no heating costs and increased living comfort. The identified drawbacks are few. Condensation can occur on the outside of the triple glazed super energy glazing in the morning, some people will miss the traditional fireplace, and some people do not like the complete silence; no noise from the wind or birds singing can penetrate the layers of insulation.

During 2004, Sustainable Energy Ireland’s Renewable Energy Information Office in Cork started to increase public awareness of the passive house concept. At Scandinavian Homes we have noted an increased interest in this desirable concept. However, there are many terms to keep track of. How many people know the difference between: kW and kWh, heat energy rating and primary energy requirement? There is the passive-house concept and the Swiss “Minergie” concept. We also hear about passive solar design meaning sunlight through windows in any house. This is confusing to the general public, and it is distinctly possible that the term “passive house” will soon degenerate into a catchphrase to promote all sort of products--Just like the phrase fat free is used to sell Cheerios and Frosties.

By simply improving our standard low-energy house Scandinavian Homes started building our first standardized passive house in Galway in March 2005. We expect the final construction costs to be only marginally higher than our normal low-energy house. A passive upgrade package is available that makes the standard Scandinavian Homes house a passive house, as many of the prerequisites of a passive house are already in place in the standard house. As with all houses we build, the building procedure is predictable and fast. The foundation works started on Wednesday the 9th of March, the pre-manufactured house arrived 6 days later on Tuesday the 15th, and the shell was erected with the roof fully felted in two days, just in time for St Patrick's day.

The house requires practically no heating at all. There is only one 900w electric heater built in to the Temovex 750 heat-recovery ventilation unit. In addition to this there are water pipes laid in the foundation under the tiled floors in the bath and utility rooms. The floor will be heated by solar collectors on the south-facing roof. A total of 6.3m2 of solar-collectors provided by Solaris of Macroom, Co. Cork take care of most of the hot-water requirements. The sun will provide all the hot-water needed throughout the year except during the four winter months when an electric heater built into the 300 litre water tank will supplement the sun. If the hot-water usage is substantial, a micro heatpump could be docked to the solar system to further reduce the electrical usage for the critical winter months. Alternatively, there are signs that wind power might soon be an option to help heat the hot water by dumping electricity into the hotwater tank from a turbine on the roof.

Low-energy houses have been built in Ireland for more than 13 years. That is at least how long Scandinavian Homes Ltd. have been providing pre-manufactured low-energy Swedish timber-frame houses to the Irish market, the company having been founded in Galway in 1991 by Lars and Linda Pettersson.

At that time these types of houses were considered very radical and the general public was quite sceptical--only one house was sold in the first year. Since then a total of 165 individual houses have been built by our company in Ireland. The emphasis is energy-efficiency and here the Swedish building methods and traditions play a large role. High levels of insulation and an air-tight building envelope in conjunction with ventilation heat-recovery systems and triple glazed low-emission-argon filled glass are important factors.

A cost efficient approach to building low-energy houses must follow rules of simplicity. The designer of a house must be aware of the negative implications of complex architectural shapes. Some features might be culturally correct and fashionable, but we should be aware of their energy consequences. Dormers, roof-windows, bay-windows, long and narrow extensions to the main body, and split levels are all examples of features that cost energy in practice.

The components of a building which are necessary in any case can be optimized for low energy losses, and include the shape and orientation of the building envelope, the performance and orientation of windows and doors, and the performance of the ventilation system. The standard houses we offer can be described as "low-energy". By optimizing these components further to the point at which a separate heat distribution system is no longer needed yields savings that help finance the extra costs of improvement of the energy performance.

The introduction in 2005 of the completely passive house upgrade redefines what is possible to achieve and sets a new standard of energy-preservation. A passive house is a house in which heat-losses are reduced to such a degree that no separate heating is necessary. The key elements of a passive house are superinsulation, absolute air-tighness, and elimination of all cold-bridging combined with a heat-recovery ventilation system. The U-values of the exterior building components generally range between 0.1 and 0.15 W/m2C. This standard has been named "Passive House" because the passive heat inputs – delivered externally by solar irradiation through the windows and provided internally by the heat emissions of appliances and occupants – essentially suffice to keep the building at comfortable indoor temperatures throughout the heating period.

It is a part of the passive house philosophy that efficient technologies are also used to minimize the other sources of energy consumption in the building, notably including electricity for household appliances. A passive house is a building in which a comfortable interior climate can be maintained without active heating and cooling systems. (Adamson 1987 and Feist 1988). Passive house is the most commonly used term for this approach, but terms such as “Zero-energy house”, “Body-heat house” and “House without heating” are different in name, but not in nature.

The criteria for a passive House per m² living area include a maximum of 10 W/m² constant heating-load , a maximum of 15 kWh/m²yr annual space-heat requirement and no more than 42 kWh/m²yr annual total amount of energy input. Amazing reductions in energy demand and the economic advantage of extremely low running costs are the obvious plus-factors for the passive house concept. As well as this, an ecological building advantage can be recognized. At the projecting stage careful considerations are made for every minuscule detail of the building, with the physical performance, as well as the environmental impact of all materials used being analysed.

The passive house represents the most consistent concept of sustainable building today. During the construction stage the passive house concept requires quality workmanship emanating from a good understanding of the passive principles by all participants. From our experience, this inclusive approach has been highly appreciated by the workmen and has further increased their motivation and work-satisfaction.