One-off house with a green conscience 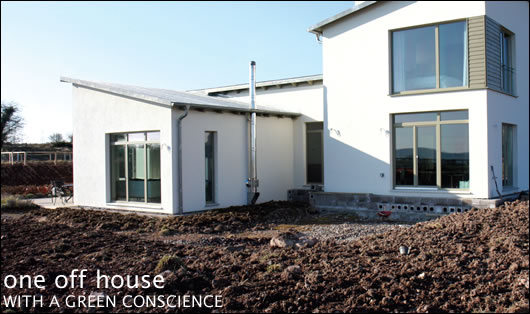 Mixing excellent thermal performance with renewable heating, efforts to boost biodiversity and plans for micro-generation, a new timber frame house in rural Cork shows that both appealing design and low environmental impact can be achieved with one-off rural housing.

Richard Linger's new home was always going to be green. An engineer and former sustainability director at consultants WYG, Linger is now with solar PV supplier Coolpower. "I couldn't just go and throw up a block house with single glazing and large oil burner," he says.

Returning to Ireland in 2006 after emigrating in 1990, Linger immediately started planning to build a house near Blarney, Co Cork. He spent a year and a half researching building options before choosing a timber frame system from German manufacturer Hanse Haus.

Hanse Haus’s turnkey package – with the structure, internal finishing and energy systems all included – appealed to Linger. "I knew what we needed from a technical point of view, and I didn't want multiple vendors providing solutions and conflicting," he says. He spent a week at the company's facility in Germany going through technical specifications and choosing internal finishings. Hanse Haus's pre-fabricated homes come with a 20 year structural guarantee, and the company has built around 40 in Ireland to date. 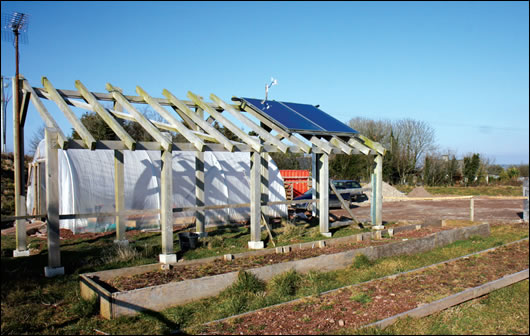 Eager to have an ultra low energy home, Linger asked Hanse Haus to beef up their standard wall insulation – they obliged, using 150mm of polystyrene externally rather than 100mm. From the inside out, the wall build-up features 12.5mm plasterboard, a vapour control layer, 8mm OSB board, 125mm timber studs insulated with mineral wool, another 8mm of OSB board, 150mm of polystyrene followed by a 3mm reinforced plaster and fibreglass mesh and a 2mm synthetic resin plaster. Insulation is fitted in the factory, and is glued rather than nailed to prevent sagging. The walls have a U-value of 0.12 W/m2K, and the spec used for Linger's house is now Hanse Haus's standard.

The roof has a U-value of 0.16 W/m2K – from the outside in, it features a roof covering with zinc sheeting, a sound deadening and isolation layer, a breathable damp diffusing membrane, plywood, 240mm of mineral wool insulation between the rafters, a vapour control layer, more battening and counter-battening, and plasterboard inside. 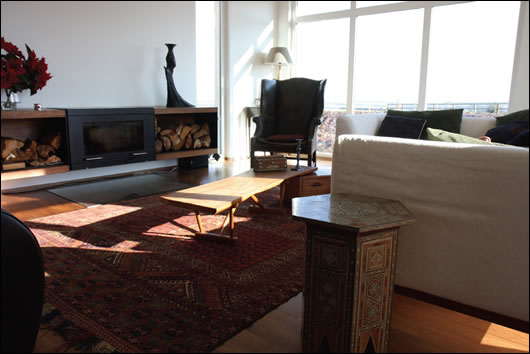 Hanse Haus manufacture their own windows – double-glazed units with a low-e coating and a centre pane U-value of 1.0 W/m2K. Based on energy modeling of the house using software from Integrated Environmental Solutions, Linger chose glass with reflective coating for the south face facade to prevent overheating.

An Oschner Airthermal super-split air-to-water heat pump, supplied by Eurotech, provides most heat. "It's fantastic," Linger says. "The guys [from Eurotech] came and upgraded the software a little while ago, and the [electricity] consumption has dropped further based on that upgrade. The equipment is excellent, it's certainly one of the best heat pumps I've come across and I've seen a lot of heat pumps about the place."

With a certified COP of 4.2, the unit has the highest efficiency rating of any heat pump listed on the SEAI's Harp database. The system has been designed with a horizontal evaporator – water generated when heat is extracted from the air drops to the ground rather than running down the face of the unit, minimising the risk of the system icing up. 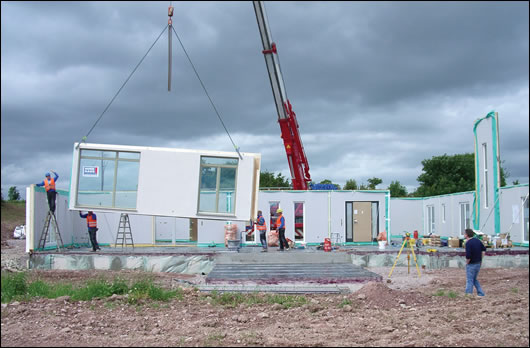 The turnkey timber frame home, supplied by Hanse Haus, comes together in sections

Air-source heat pumps in Ireland were put to the ultimate test during the freezing winter, but Eurotech's Gerry Duffy says no customers contacted him with complaints. "For it to have heated a house with no difficulty for the winter of 2009/2010 is testimony to the fact that the machine is ideal for what it's being used for," he says. Duffy adds that if any defrosting is necessary, three quarters of the heat used is generated by the machine itself, and a quarter from electricity.

An eight square metre solar array from Sonnenkraft – who are supplied to the Irish market through Unipipe – sitting on top of a gazebo in the garden, contributes to hot water demand. "I didn't want the [solar fixings] piercing the zinc roof [of the house], and I didn't want to impact the aesthetics of the building," Linger says. Putting the panels on the gazebo has caused some minor efficiency losses, but he says they're "not significant".

The Oschner Airthermal unit heats a buffer tank – from here heat is distributed throughout the house via an underfloor heating system at around 25C. The solar panels heat a second tank used for hot water, and if needed the heat pump heats this tank too to via a heat exchanger. 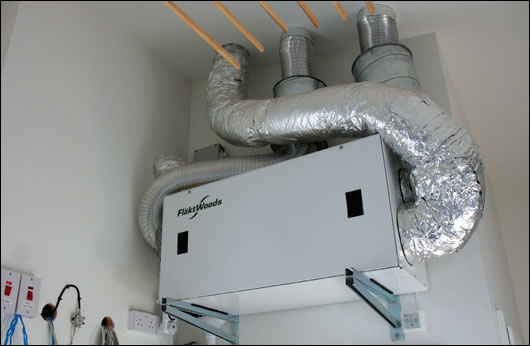 Having two tanks at separate temperatures – one for space heating, the other for hot water – is more efficient than having a single tank with a temperature gradient, Linger says, as it allows water to be heated just to the required temperatures. Having a stratified tank means needlessly heating water to temperatures between the two levels required.

Most rooms serve as separate heating zones with their own temperature controls, but the large living and dining space is divided into three separate zones. A central digital display allows for detailed temperature control too, displaying the current temperature in each zone and outside. This allows for – in theory – a very sophisticated level of control. But Linger stresses: "In real terms, because the building is so efficient the heat is very rarely on."

Linger installed two wood-burning stoves too – one from Conmoto and one from Kalfire, both with external air sources. The Kalfire unit uses out-going flue gases to pre-heat incoming air. A Fläkt Woods heat recovery ventilation unit contributes to space heating too. With an air-tightness result of just 1.16 m3/m2/hr, a designed ventilation system like this was key.

Hanse Haus wired the building for micro generation too. And though Linger has collected a year's worth of wind speed data at the house – he says it's a "reasonably good site" for wind – he'll put in solar PV first. He plans to orientate the array to maximize winter performance – this means angling it at 35-40 degrees rather than 25-30 to catch the low winter sun. "Average sunshine in winter appears to be increasing," he says. Once he installs PV, Linger reckons the house will achieve an A1 or A2 building energy rating (BER).

He's also planning to install Coolpower's Emma device, which will monitor how much electricity  u the house is generating and using and divert any excess to an immersion to heat hot water, allowing Linger to use extra electricity himself before exporting to the grid. 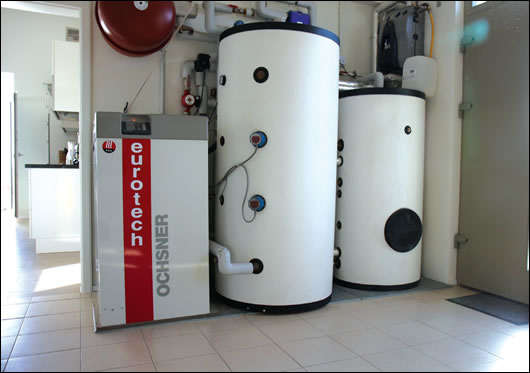 Beyond energy use, the house boasts other green features – Linger insisted that all timber had FSC or equivalent certification, and the concrete foundations contain Ecocem's GGBS. He plans to have the home assessed under the UK Code for Sustainable Homes, which rates the environmental credentials of buildings based on factors including energy, water, materials, waste and impact on biodiversity.

He's also planting 1,000 trees – all native species like hawthorn, oak and holly – to offset the carbon footprint of construction. 500 are already in, and one acts as a natural brise soleil outside the south facade too. Wastewater is treated by a standard septic tank with an oversized percolation area.

Linger followed Cork County Council's rural design guidelines in his planning application, incorporating many of their suggested features for contemporary design. But the house isn't at all vernacular in the boring – or just plain ugly – sense. The design is simple yet modern, and quite eye-catching.

Linger's home may be large – it's 310 square metres – but with attention to energy demand, the impact of materials and biodiversity, it offers lessons for buildings of all sizes.