The development of Coppinger Court, a high density apartment complex on Popes Quay, Cork City, has been broadly received with a warm response, picking up awards in 2004 including the RIAI Best Sustainable Building award. 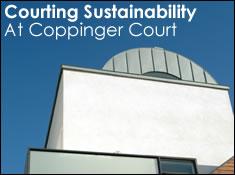 What - no grass roofs? No solar panels? No reed beds?

Yet Coppinger Court was awarded Best Sustainable Building 2004 by the R.I.A.I. in association with the Department of the Environment and described by them as a development which “embodies an aspiration to urban sustainability”. This mixed use, infill scheme on Popes Quay in Cork City, is so embedded in the grain and understated in it’s expression you may have difficulty finding it unless you abandon your car, take to your feet and ask for directions.

But what is Urban Sustainability?

Sustainability is a catch phrase that is most often used in terms of the development of green-field or suburban sites, but often the fundamental question of whether it is necessary to build on such sites at all is completely overlooked. Our general philosophy is more holistic and tends to focus on tapping the potential of our existing urban resources. This is what we try to achieve in our design:

Urban sustainability is a common theme throughout our work and has been the key to the success of Coppinger Court. 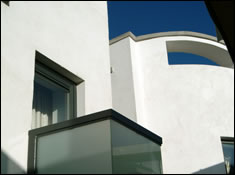 The brief was an apparently straightforward commercial brief. Our clients were two adjacent landowners with businesses on the quay, who decided to undertake a partnership venture when the site was designated under the Shandon Integrated Area Plan in 1999. This introduced incentives for residential and existing commercial and industrial businesses, and also favoured refurbishment of the quayfront buildings. We were asked to maximize the potential of the site under this scheme with good design as an essential prerequisite.

The site is nestled at the foot of the historic Shandon area on the northern bank of the River Lee, which is characterized by a dense maze of narrow streets and stepped lanes crisscrossing the hill, and is dominated by the distinctive spires of Shandon. It is enriched with a warm sense of community, which is epitomized in the description by the artist, Maud Cotter of “stepped streets, whose windows are dressed with richly detailed nets and more often than not, present an object or potted plant to the public realm.” Unfortunately this sense of community has become eroded along the river edge of Shandon by the recent incursion of a series of self-contained, car-centred apartment complexes. This approach is all too familiar in our cities over the last decade. However we eschewed this typology in favour of reconnecting with the sense of place, knitting into the grain of the existing fabric and humanizing the public spaces we created.

The site as we found it was a south-facing, brown-field area of 0.74 acres with five existing three/four storey buildings on the quayfront giving a sense of the traditional grain and scale. A series of stepped terraces with various outbuildings climbed the hill behind. Two old laneways entered the site from the quay, one linking to Shandon Street, and the other ending in a cul de sac. Scraps of remaining fabric gave clues to the former inhabitation of these laneways, calling to be brought back to life. 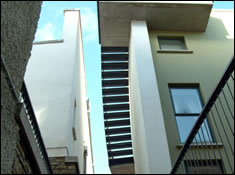 Historical patterns of use and movement informed the design layout. Commercial uses, traditionally associated with the quayfront ground floor were reinstated. An entrance to car and bicycle parking was also introduced at this level. The sloping section allowed us to use the commercial/service zone as a platform upon which to construct the residential areas above and behind the quayfront, giving a pedestrian character to the residential area. The pattern of routes through the site responds to the existing grain, with the old lanes substantiated and new links opened up between them. Lift access is also provided from the car park to the upper terrace.

The building blocks are carved to open up shared courtyard spaces off the main routes. These spaces are given a softer treatment with stone paths through gravel, and semi-private patios. Surfaces capture changing sunlight patterns throughout the day.

The density achieved is appropriate to an inner city area at 150 bed spaces per acre, made up of 43 one and two bedroom apartments and duplex units. The steep cross-section of the site, and the fact that it is south-facing, allowed easy front door access to be achieved throughout, even with three to four stories of densely packed accommodation.

Providing each home with its own entrance door fronting the streetscape helps to recreate a strong sense of neighbourhood. The doors are designed to reinforce important inherited values ingrained in the human psyche. The symbolic importance of the door is recognised: it is both entrance and barrier: it is the threshold between the world of individuals, family and home and the world outside. Doorways are designed to feel secure but friendly and we have endeavoured to define a special space at each threshold, using step, rail, window sill, canopy or bench to make this transitional space important and allow opportunities for neighbours to pause and converse.

Each apartment is individually designed to take advantage of orientation and views. The disposition of window openings, balconies, roof gardens and thresholds has been chosen for the comfort of the people "behind" them, and the room layouts optimize the benefit of sunlight corresponding use to time of day.

Private open spaces are integrated into the design concept, as natural extensions to the indoor living areas, rather than tack-on afterthoughts. Each space is individually designed to balance sunny orientation with shelter from the elements and good views with a sense of privacy. Some open spaces are more extroverted and others introverted, allowing for different personalities. Practical considerations such as clothes hanging areas, are shielded behind sandblasted glass screens, or timber paneling.

Budget constraints did not allow for any sophisticated eco-technology. However, basic principles of good design such as optimizing passive solar gain, using natural cross-ventilation wherever possible, and gaining shelter and heat loss benefit by stacking units, were used throughout. 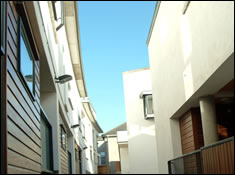 The palette of materials is restrained, using largely self-coloured render of white sand and cement with lime to give a homogenous, easily maintained finish on blockwork walls. This is coupled with exaggerated concrete projected moulding, which serves to protect the render from unnecessary staining and contributes to low maintenance. Timber paneled elements are carefully chosen to introduce softness and tactility. For the majority of the roofing we choose zinc, a material that is not only recyclable and low maintenance but eminently suitable for the variety of different roof profiles used in the project. These range from low mono-pitched roofs to barrel vaults, creating scale, rhythmic grain and individuality to each home within the complex and allowing an interestingly inhabited roofscape.

Zinc also plays an important role in the discourse between the old and new layers of the project. Its hue is in harmony with the natural slate used on the roofs of the quayfront buildings, yet stands in delicate contrast. The refurbished buildings were treated to hardwood sash windows, while the new buildings were given aluminium double glazing. Limestone walling has been specifically reinstated in key parts of the site as an acknowledgement of the layers of history.

The construction process was not easy, given the constraints of the site and the non-repetetive nature of the design, but the main contractors, Murnane & O’Shea Ltd., tackled the project with both skill and professionalism, and the end result has been rewarded by achieving the Opus Architecture and Construction Housing Award 2004 from the C.I.F. and the R.I.A.I.

What future for the City of Culture?

Coppinger Court was supported both by the planning authority and by An Bord Pleanála, who demonstrated their vision for the City when they reported in February 2000 that Coppinger Court “is a high quality and well thought out development that will preserve the integrity of Popes Quay and the fabric of the traditional laneways to the rear. I agree with the planning authority’s assessment that this is an innovative development which could be considered as an Urban Pilot Project to demonstrate the potential for inner city redevelopment.”

As Cork city takes to the European stage for 2005, amidst a flurry of construction activity, and with the vast 166 acre dockland area on the brink of major redevelopment, we hope that the guiding principles of urban sustainability will help to recreate Cork as a model of urban development.