Sustainable social housing to be launched next Monday

The redeveloped low-energy social housing at York Street in Dublin's south inner city will be officially opened next Monday, May 25. 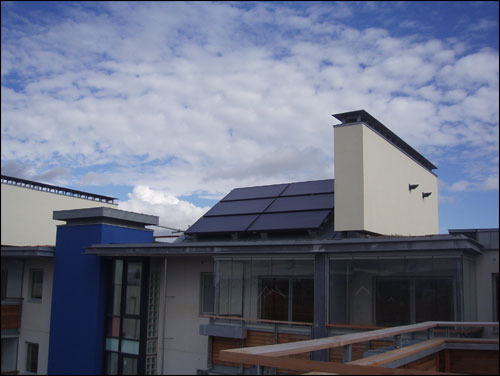 The redeveloped low-energy social housing at York Street in Dublin's south inner city will be officially opened next Monday, May 25. The newly-constructed apartments boast excellent Building Energy Ratings – some with ratings as high as A3 – and could reduce fuel costs for residents by up to 70 per cent, according to project energy advisor Codema. The project is profiled in detail in the current issue of Construct Ireland.

The redevelopment by Dublin City Council includes 66 new council apartments arranged in five blocks with communal spaces on the ground floor and three roof gardens.  A major feature of this redevelopment is the use of solar panels on the roof, which provide hot water for the residents.  Highly efficient condensing gas boilers back up the solar panels at peak load.  The majority of blocks have a group heating system, with individual apartments fitted with heat exchangers and heat meters to accurately measure and bill individual energy users.

Timbers from the original floor joists in the demolished building were salvaged and reused as part of the new roof structure.  Rainwater from the main roofs is collected for use in the gardens, to conserve water and reduce flooding.

A smaller mews development to the rear is constructed in brick and timber with lime render finish to the external walls.  Green roofs are also incorporated, helping to restore the vegetated footprint that was lost when the original buildings were constructed.

Codema director Gerry Wardell said: "These apartments will provide comfortable, modern accommodation for the York Street community.  There will be economic, social and environmental benefits which will be closely monitored as the development progresses."

Codema acts as energy advisor to the four Dublin local authorities and also works with the private sector.