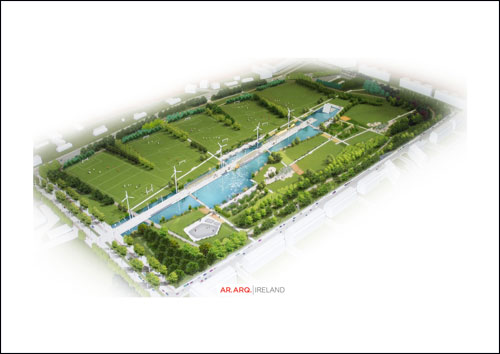 Five wind turbines supply all electricity needs within the park. The turbines have a rotor diameter of 15 metres and height of over 32m. They will provide energy for the lighting, water-pumping system, changing rooms and maintenance depot.

Gerry Barry, Dublin City Council’s Head of Parks and Landscape Services, said: “Fr. Collins Park has the capacity to be entirely energy self-sufficient. The five wind turbines harness the wind and provide the energy that powers the park’s lighting, aeration and water features.”

The park contains a series of ponds and constructed wetlands that contain and treat water on-site as part of a recycling system that will keep the main water features clean.

According to Dublin City Council, other sustainable elements include the use of native species in planting, protection and creation of hedgerows, the connectivity of woodland into ecological corridors, the provision of cycling paths to the new Clongriffin DART station (due to open in 2010) and the use of durable, low-maintenance materials.

The park also features five grass pitches with changing room facilities, a 1.5km circuit track for cycling and walking, two playgrounds and a skateboard park along with grassland, lake, picnic and amphitheatre areas.

Fr. Collins Park is a park for the people," Lord Mayor Eibhlin Byrne said. "It provides amenities for children, young people and adults of all ages in the north central area’s population of about 125,000. The park will play a crucial part in creating a sense of place and community for people living and coming to Clongriffin and Belmayne, which will have a population of about 15,000 when complete. It also demonstrates Dublin City Council’s commitment to the innovative application of sustainable wind turbine technology.”

Work on the €20m Fr Collins Park - designed by Argentinean architects Abelleyro & Romero - started in 2007 in conjunction with MCO Projects and was completed earlier this year.