Energy and innovation minister of state Conor Lenihan today officially launched a nationwide scheme expected to generate thousands of new jobs in the clean-tech sector over the next 6 to 12 months.

New company Greenloan has set up an offering to co-incide with the Home Energy Saving scheme which aims to create significant employment opportunities in local communities throughout Ireland by grouping homeowners to avail of large discounts in upgrading their properties. 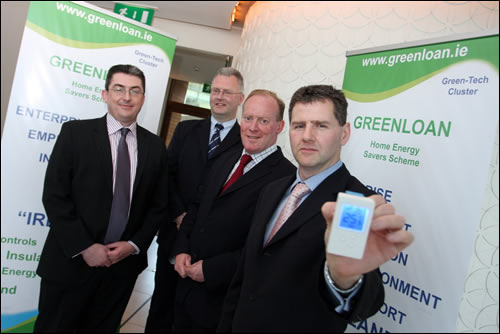 Energy and innovation minister of state Conor Lenihan today officially launched a nationwide scheme expected to generate thousands of new jobs in the clean-tech sector over the next six to twelve months.
New company Greenloan has set up an offering to co-incide with the Home Energy Saving scheme which aims to create significant employment opportunities in local communities throughout Ireland by grouping homeowners to avail of large discounts in upgrading their properties.
Over 250 clusters comprising thousands of homeowners in all 26 counties have already been created under the venture, which was originally piloted in 2008 as part of the pilot phase of the SEI Home Energy Saving scheme.
Speaking today minister Lenihan said: “My department has made available almost EUR50 million to the Home Energy Saving Scheme for 2009. This is expected to fund in excess of 30,000 home energy upgrades this year alone and generate a large amount of much needed employment in the current economic circumstances.”
“I welcome the great interest in the scheme from the business sector. There is now wide acceptance that the green economy is a major growth area. The almost €50 million going into the green economy this year from the Home Energy Saving scheme offers a very attractive commercial opportunity for businesses that assist homeowners with completing insulation and other works under the scheme and in particular those which add value to the transaction,” added Minister Lenihan.
Welcoming the launch of the new scheme, Aidan Burke of the Construction Industry Federation said: “CIF is delighted to see the launch of this innovative scheme and sees long term benefits in funding the retrofitting of buildings and creating construction employment. The cluster approach is unique and will create all sorts of synergies of benefit to the customer and contractor alike.”
Greenloan administrator Mary Stewart said: “The Greenloan scheme enables homeowners to renovate their homes in an organised cluster, save money, help protect the environment, and support Irish employment and Irish manufacturers. We believe clean-tech and construction workers will benefit from the thousands of jobs created by this scheme over the next year as people look to renovate their homes with new wood pellet boilers, solar hot water systems, and attic and cavity wall insulation.”
“The primary focus of the pilot scheme was efficiency and carbon reduction all based on clustering works to achieve a significant cost reduction for the householder. The national scheme is different in that its primary focus is on job creation,” she added.
Stewart pointed out that an estimated 800,000 euro was injected into the County Mayo economy during the eight-week pilot scheme. “Over 115 homes with an average investment of €7,500 underwent upgrades, which were carried out by 40 separate contractors throughout Mayo. If the same numbers occur on the national
scheme as on the pilot, we can expect to create in excess of 4,000 jobs in the next year” she explained.
Stewart continued: “Groups of local residents can form clusters. By pooling together, the costs of works are substantially reduced as bulk works are organised at significant discounts of up to 40 per cent. The only commitment that must be made by homeowners is to have a Building Energy Rating (BER) assessment carried out on their home.  200 euro grants are available towards this cost.”
According to Greenloan their scheme comes with strict quality assurance, low pricing on equipment upgrades and insulation, and open access to individuals to generate business by becoming BER cluster leaders and installers, thus helping to generate employment. Cluster participants can include homeowners, BER assessors, architects, engineers, construction workers, gardeners, plumbers and electricians.
According to Stewart: “In advance of carbon taxes and payments to cover the cost of carbon emissions, the Greenloan scheme is providing businesses, homeowners and landlords the ideal opportunity to upgrade their cost base in advance of these extra taxes. Prices in the construction industry have never been lower so homeowners should take advantage of low product prices, lower installation prices and grant assistance now.”
Last modified on Tuesday, 02 June 2009 15:20