A state-of-the-art archive building in Cambridgeshire, which has been built to house Imperial War Museums’ (IWM) rich paper collection, has registered the best airtightness test result ever recorded in the UK – and perhaps, the world.

The building at IWM Duxford – one of five IWM museums and historic sites covering war and conflict from the First World War to the present day – has been designed to meet the passive house standard, allowing IWM’s documents collection to be preserved in the best possible conditions.

The 1,238 sqm building, which has just come through practical completion, achieved a final airtightness score of 0.03 air changes per hour (ACH) at 50 Pascals – making the building 20 times tighter than the target for certified passive buildings, and approximately 200 times tighter than current UK requirements for non-domestic buildings. The Passive House Institute is aware of one other project that has achieved 0.03 ACH – but none lower.

The project benefited from bona fide passive house expertise on the design team, led by architects Architype and passive house consultant Nick Grant of Elemental Solutions. The result is made all the more remarkable by the fact that although main contractors Fabrite had done airtightness work before, they were new to passive house airtightness standards – and by all accounts rose to the challenge.

Architype associate Gareth Selby worked on the project from early design stage, and his colleague Meital Ben Dayan came on as project architect from stage three onwards. The building started on site in May 2018. According to Selby, a design approach that focused on simplicity and buildability was key.

“At stage 4 when we were detailing it was one simple layer – originally to be of plaster – and then at the ceiling was one simple layer of concrete.” This kind of stripped back simplicity is something Nick Grant – a champion of value engineering in the truest sense, rather than the more cynical practices that too often pass for it - is renowned for. Architype and Grant had worked together on many other projects, and IWM Duxford draws heavily on the lessons learned from the repository section of Hereford Archive and Records Centre – essentially a wet plastered concrete box, connected to a thermally independent timber frame section.

At Duxford, the walls consist of loadbearing 440mm blocks laid on their side, with the airtight layer on the room side – with an insulation layer and steel cladding externally. Grant suggested substituting the wet plastered finish with Blowerproof, an innovative paint-on airtightness membrane which had recently gained BBA certification.

As Blowerproof is available in a white finish, the decision was taken to leave the airtight layer exposed. But the new product first had to be submitted to the scrutiny of a client with exacting standards: IWM is duty bound to take an unusually long-term view, given the need to develop and care for its collection for future generations.

The organisation subjected a sample of Blowerproof to an Oddy Test – a procedure developed to test materials for safety in and around art objects, and specifically for trace amounts of chemicals and pollutants that may offgas and harm objects over time.

According to Selby, the product passed with flying colours.

Engagement from the main contractor is critical to delivering airtightness on iste, and both Selby and Grant are effusive with praise for Fabrite, whose contracts manager Nigel Johnston and site manager Darren Fraser took charge of delivering the airtightness on site. “It was conveyed to me very early, this building hinges on achieving a good airtightness score,” said Fraser. This meant “making sure the same enthusiasm and attention to detail was carried out on site, monitoring the attention to detail and making sure everyone was on the same page – and chasing people around with mastic tubes.”

Four coats of Blowerproof were applied by applicator UCL – two before an initial airtightness test, and another two after. One compromising factor was doors: four hour fire rated doors and gas blowout doors, which weren’t available to passive house specs. “We had a huge leakage from door frames,” said Fraser. “Before the test we noticed the door frame was hollow, spoke to the supplier, filled the frame with Rockwool to try to prevent air leakage, and put lots of mastic around the frame.”

According to Selby, the other tricky areas from a detailing perspective were the connections between the roof and the wall. Again, the design team drew from the experience on Hereford Archive. The roof structure consists of precast hollowcore concrete planks between downstand beams. Little junctions between planks, and gaps where the hollowcore plank ends met the walls, required particular care on site. 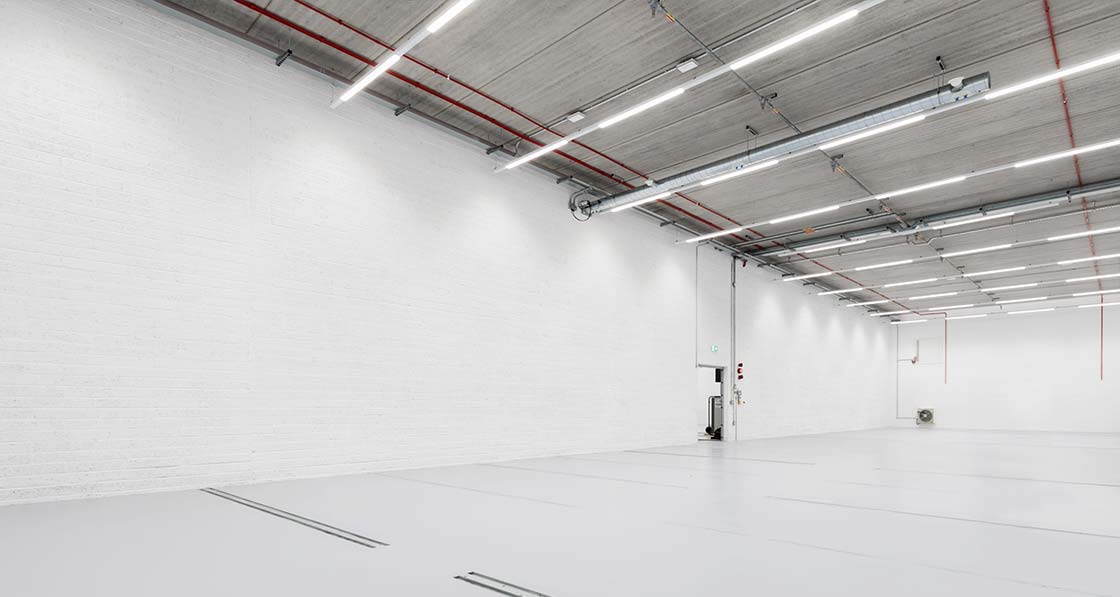 “You become a bit obsessive,” said Fraser, who says that enthusiasm, planning and communication were key to the project’s success. “By considering the tricky junction details before work on site started, information was readily available. The message and principles of passive house builds were well communicated to Fabrite as contractors and in turn passed on to site. The project was a great success and an extremely enjoyable experience. I would love to work with this team on future projects.”