When Angie and Paul Dallas came to buy windows from Green Building Store in Huddersfield, they thought they were nearing the end of a long journey. It had taken five years of battling with local councillors and conservationists, and two redesigns from different architects, to get permission to build a house in the garden of their property in the West Yorkshire village of Golcar. After finally gaining approval for the design, all they wanted were low energy, high-performance windows to reduce heating costs. But the visit to the Green Building Store turned out to be just the beginning of a new adventure.

Company director Chris Herring looked at the architect’s drawings and suggested going much further with their green agenda to create a passive house. “It was very unusual that we could do that using the original plans. The vast majority of designs would have had the wrong form, or pointed in the wrong way for a passive house,” said co-director Bill Butcher. “But the Golcar design was a simple rectangle and all we needed to do was to re-orientate it towards the south and take some windows out of the north side.” 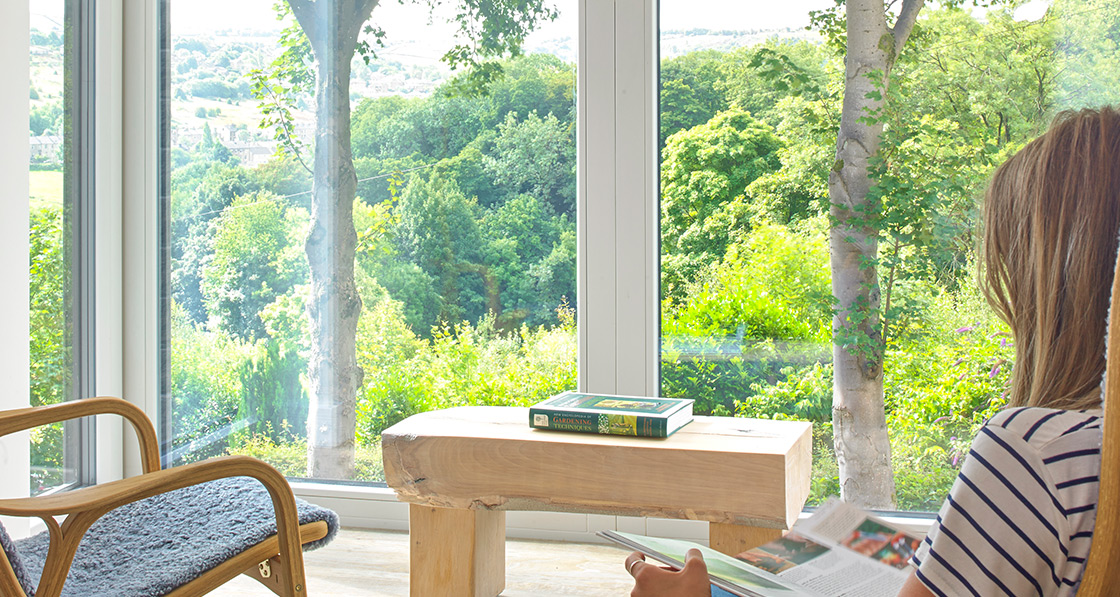 Green Building Store have been pioneers in the development of passive houses in the UK. In the nearby village of Denby Dale, they designed the first UK passive house to be built with cavity wall construction. It served as a template for their work on the 296 square metre, three-storey, four-bedroom Golcar passive house, although there were some significant modifications and improvements on the system used at Denby Dale.

Angie and Paul Dallas were excited by the idea of building a passive house. Angie, an optometrist by trade, has a love of new engineering and had “visited every house building show in the UK” searching for innovative ideas. She was already familiar with the passive house concept. “I’m delighted we changed our minds and went for a passive house. You don’t get hot spots, the house is not at all fusty-smelling and it has been at a lovely constant temperature since we moved in last May,” she said.

“It has many qualities that other houses don’t have, including a peace I’ve not experienced elsewhere. I think it’s down to the insulation and the quality of the windows, which make it very quiet. Someone joked that in the event of a nuclear war they’d come round to our house.”

When Angie and Paul decided to build a new house, they retained four fifths of the original plot, including a significant amount of land. But they sold their original house to finance the project. To make the old house saleable, it was necessary to construct retaining walls on both sides of the new house and another one to provide parking spaces, which made the project more costly than planned. 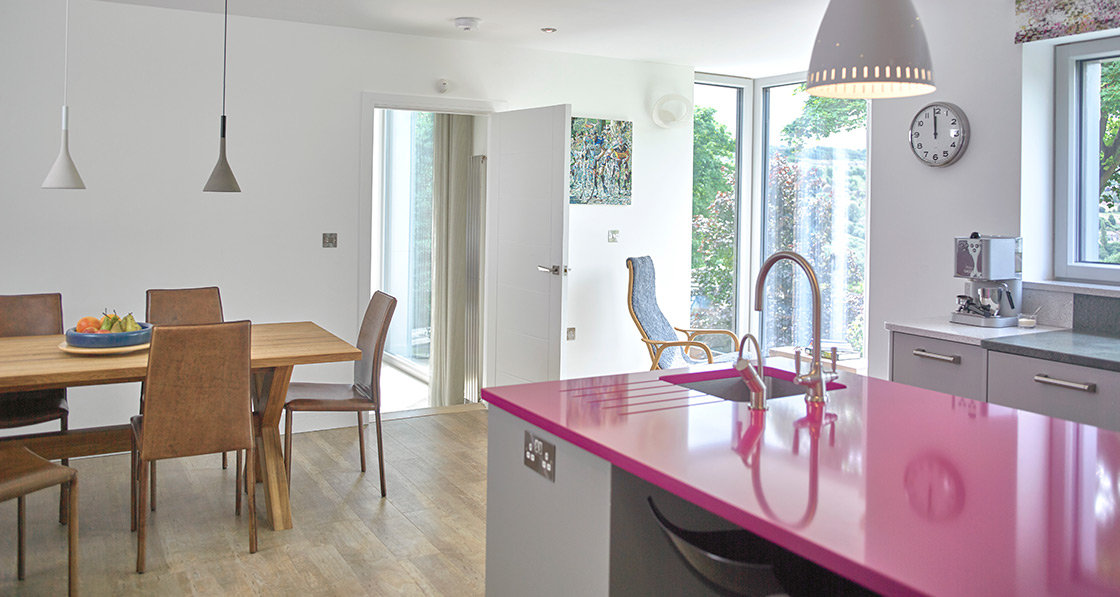 The Golcar passive house is a radically different place from the 1930s detached house the couple previously inhabited. It has an open plan kitchen and living space on the middle floor with views over the garden and the beautiful Colne Valley. The main bedrooms are down on the ground floor with access to the garden. The third floor is within a warm roof space and comprises a study, spare bedroom and the plant room for the MVHR.

Paul loves his new home, not least because he helped to build it. An engineer by trade, he ended up working full time on the project and being compensated for his hours. “Paul wanted to project manage from the start and when they turned up on the first day with a foreman, his nose was put out of joint. But he kept working and when one member of the team left, they never replaced him,” said Angie.

Bill Butcher said his team took care of all the passive house elements, but Paul was responsible for the second fix. “Paul took over what I call the ‘pretty side’ of the build. Green Building Store looked after the building fabric, airtightness, heating and MVHR systems. Then Paul did all non-passive house aspects, including kitchens, bathrooms, staircases and fittings.” 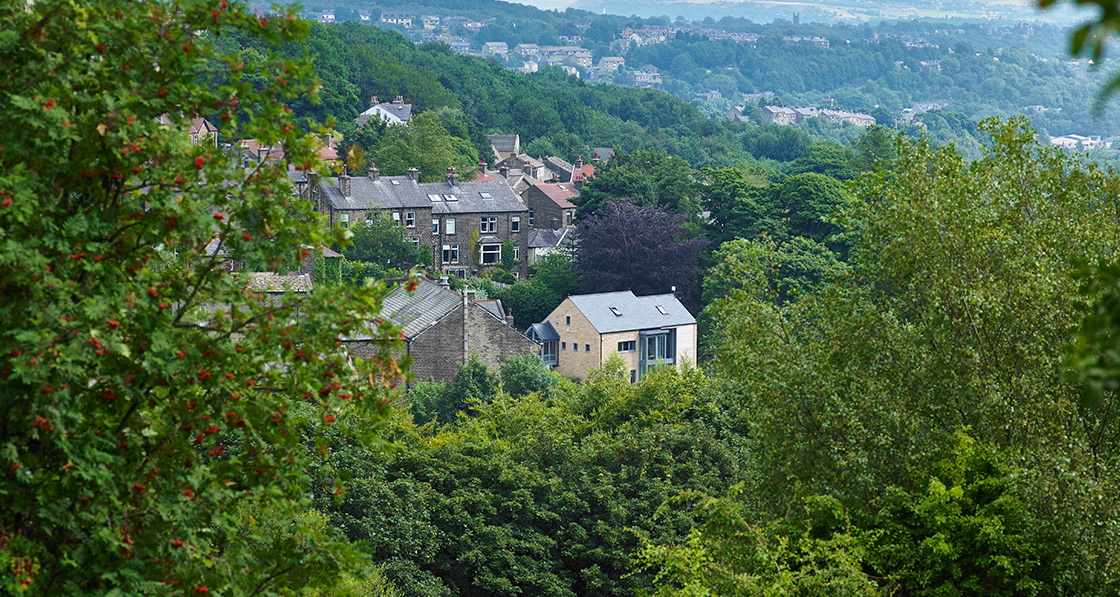 The house is situated in an idyllic location with views over the beautiful Colne Valley.

The Golcar passive house has a similar cavity wall design to its Denby Dale forerunner. This style is in keeping with the local vernacular in West Yorkshire, where there is a tradition of heavy masonry. Both houses were built with the same Yorkshire stone externally, although the Golcar one mixed stone with timber cladding on certain aspects. “The Golcar house was an evolution of the Denby Dale project. We learned a lot of lessons and did things in a slightly more sophisticated way,” said Butcher.

One of these was using extruded rather than expanded polystyrene in the 300mm super-wide wall cavity, below the damp proof course. “Examining the evidence from both sides of the argument we feel extruded is more moisture resistant than expanded and thus retains a better lambda value [thermal performance],” said Butcher. “However the industry is still arguing.” The DPM was also taken through the inner leaf to keep the first concrete block below the floor slab dry, allowing optimal thermal performance.

Another one of the main differences between Golcar and Denby Dale was the use of a new range of high-performance windows from the Czech Republic. Originally, the intention was to use windows from the Green Building Store’s Ultra range, but they later switched to the new Progression range. The windows offered an even better U-value, as well as narrow sightlines and a virtually invisible frame viewed from the outside, which increased passive solar gain.

Another striking difference with the Denby Dale project was the use of a ‘warm’ cathedral roof as opposed to a cold one. 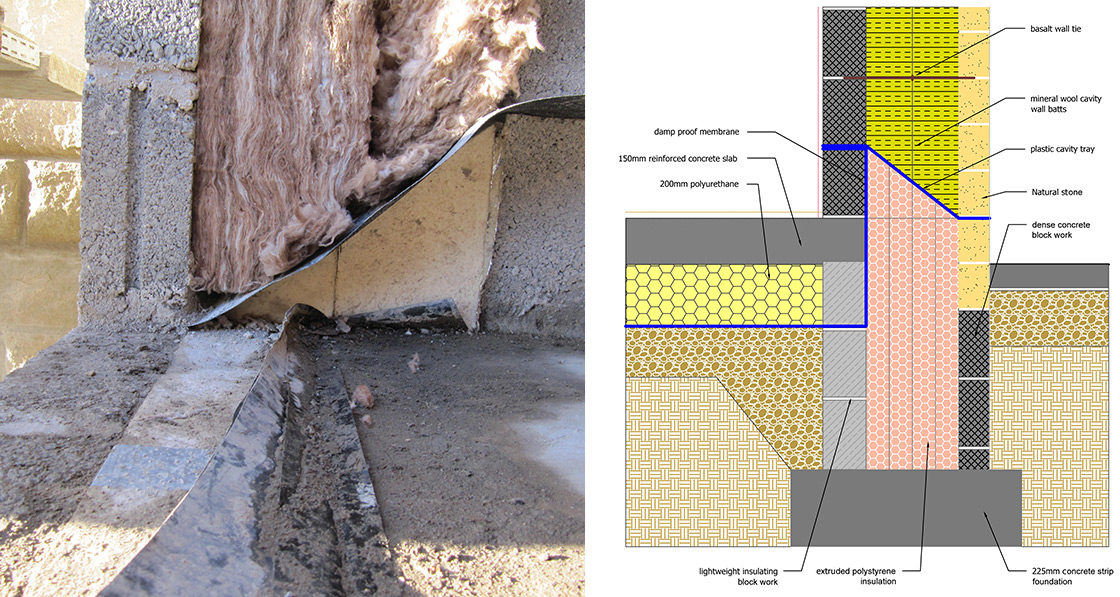 Though a more expensive option because it involved a more complex build, the warm roof created extra space in the attic area. The walls were also thicker on the Golcar house. “The structural engineer specified that we use 140mm inner concrete block leaf due to the large expanse of walls. In theory we have even more thermal mass than at Denby Dale, although in reality this will probably make little difference,” said Butcher.

The Golcar heating system also involved trying out a different approach. At Denby Dale, there had been issues with the boiler ‘cycling’ and turning on and off too frequently. So at Golcar, the team decided to totally separate the function of the MVHR system and the heating system. The Vaillant EcoTec central heating boiler and MVHR unit are both located in the upstairs plant room but work independently. The designers used a thermal store in the plant room to add volume to the system. “Without the buffer tank, it would be too small as there are only two small radiators and three towel radiators in the whole building,” said Butcher.

The thermal store is heated by solar thermal panels too, and also supplies hot water.

The house was asking for heat but the system could not supply enough to work at full condensing capacity,” said Butcher. 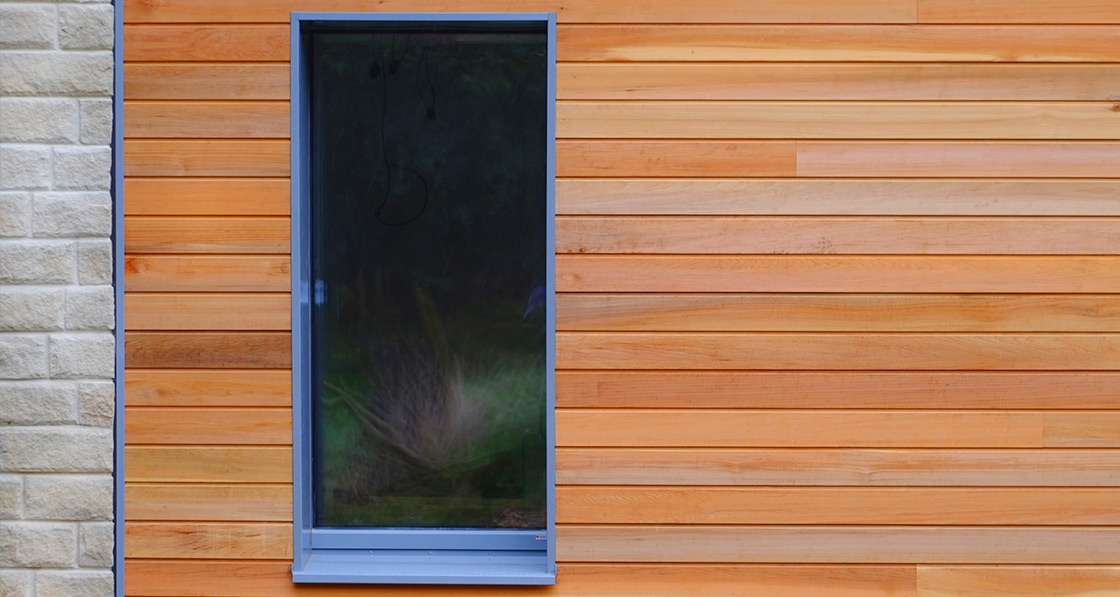 The house features the new passive house certified Progression range of triple-glazed windows, which have a virtually invisible frame when viewed from the outside, increasing passive solar gain

Another change from Denby Dale is the use of Compacfoam insulation — which has strong compressive strength — under the thresholds and large windows to reduce thermal bridging at those junctions.

This offered an innovative, cheaper and easier solution to the problem of reducing thermal bridging at thresholds. And there were a host of smaller changes, such as painting the plywood boxes — which support the windows in the wall cavities — with an acrylic wood primer to make them weather proof and prevent the warping and delaminating as happened at Denby Dale. Bill Butcher is proud of the Golcar house, but as a perfectionist, he thinks it has been somewhat “over-designed” and is “overperforming”.

He says it is good practice to design for a space heating demand for a passive house under 15 kWh/m2, which gives some room for error. “We aimed for 14 kWh/m2, but due to a number of factors we ended up with 8.6 kWh/m2, which is an over-design. We would have been happy with 13.”

Among these factors was the late change of window specification which meant a lower U-value and greater passive solar gain. The initial PHPP calculations were also on the conservative side in terms of estimating psi values (heat losses at junctions). In addition, the airtightness test carried out by Leeds Beckett University came out better than the design team had modeled for at 0.25 air changes per hour (ACH), whereas the passive house standard only requires 0.6 ACH.

“It may appear strange to be self-critical for over-designing and surpassing the passive house requirements. What it means for this project is that we could have used less insulation in the walls and saved money.

With more experience of building passive houses we can fine tune it better,” he said.

Butcher, in his spirit of total honesty, was also concerned about the dangers of overheating. “Paul and Angie had been keen to retain the large expanse of glazing that had been in the original designs.

Throughout the design process we did warn them that there might be a chance of overheating as there isn’t any extra shading other than the two deciduous trees in the garden. PHPP shows that if the client is willing to open windows, it won’t overheat.

So they will have to be careful to keep opening windows in the heart of summer. Alternatively, external shading could be added at a later stage.” 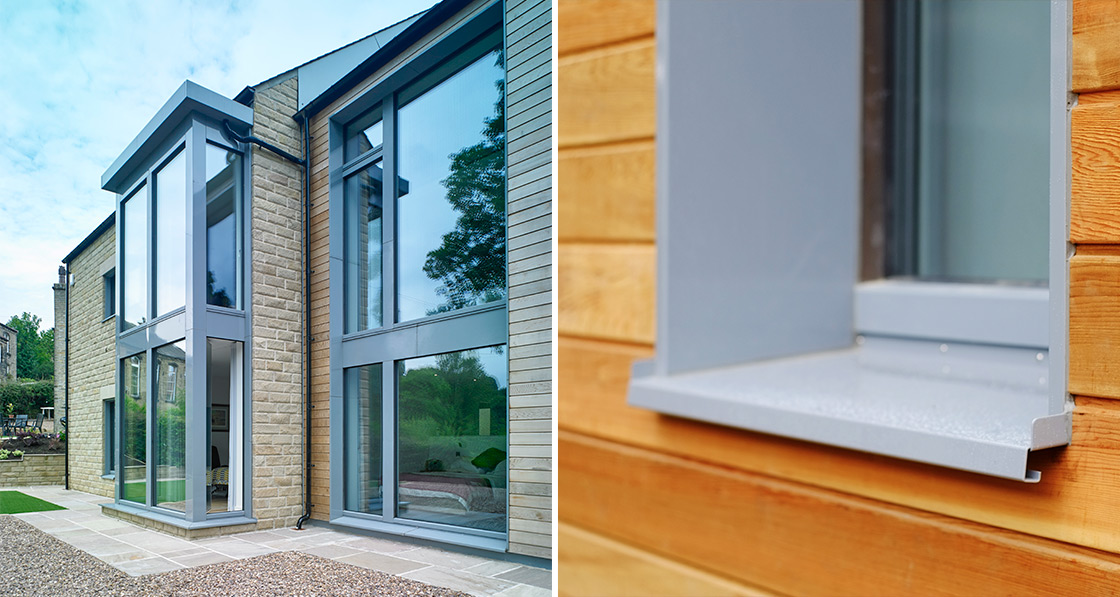 Gas consumption data (Feb 2015 to Feb 2016): 654m3 or 7316 kWh gas consumption. Divided by the treated floor area of 230 square metres gives 32 kWh/m2/yr (including cooking, water heating costs and energy consumption used for ‘drying out’ the house — house occupied since May 2015 but was heated since February 2015 during internal works and for drying out).