If you are an architect and you let slip to your professional peers that you are thinking of building your own home, be prepared to get your ears bent. Don’t do it, they warn. You’ll never be happy. You’ll be your own nightmare client. You’ll keep designing and re-designing for an eternity. No-one will want to work with you.

As a breed, architects can tend towards perfectionism and Boris de Swart, by his own admission, is no exception. But while he was mindful of the warnings, all the encouragement he needed came from no less than his wife. Boris, co-director with Greg Tisdell of Studio D architects in Dublin but who bases himself and his family in Cork city, had designed and managed several low-energy homes that only went part of the way to the passive house standard. 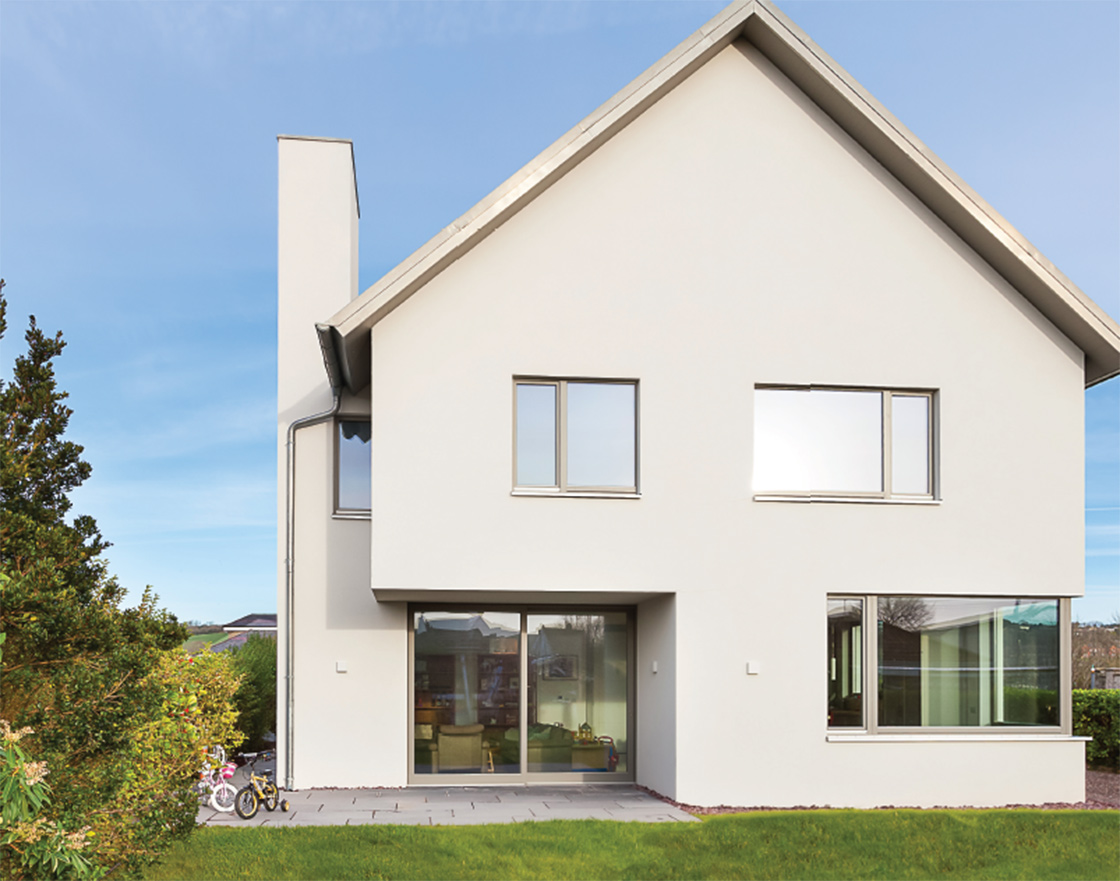 “Those houses had been a learning curve for all involved, and when I was presented the opportunity to build from scratch for myself, what seemed like the ultimate challenge was there,” he says. If any further evidence was needed of his willingness to get stuck in, he also became the main contractor on the project.

“From the beginning of the project I had been putting out feelers for a contractor who would build to the standard that I would feel acceptable — keeping in mind the very tight budget — which proved fruitless,” he says. 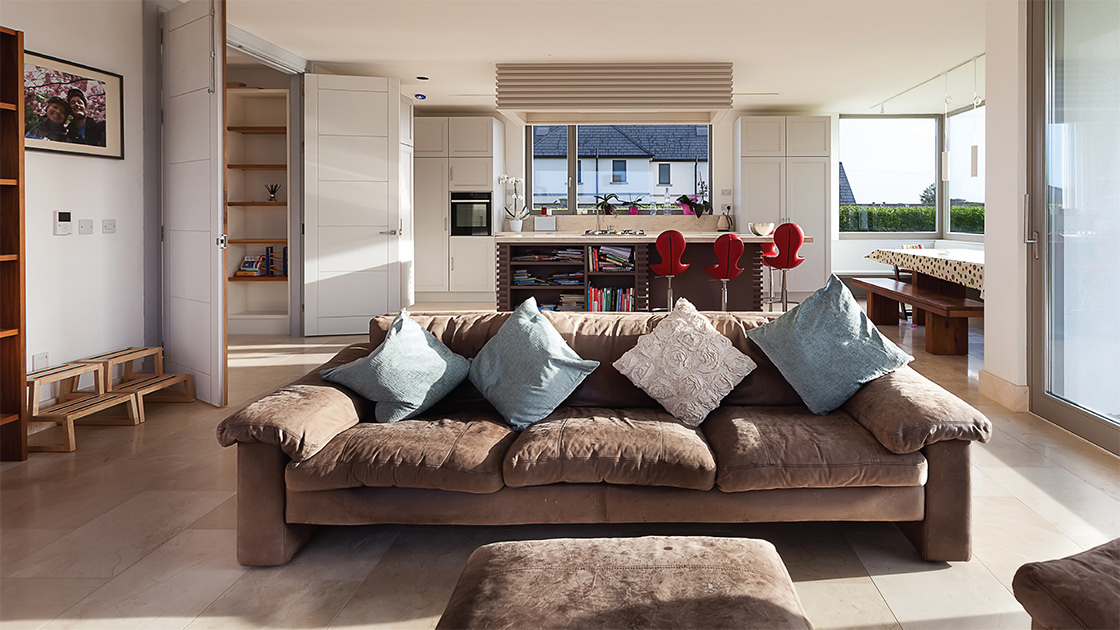 From the outset he had intended to get his hands dirty on site, both for cost reasons and to keep an eye on things. “By the time planning permission was granted, I figured that seeing as I was going to be on site every day to make sure everything was done the way I wanted it, I might as well act as the main contractor myself.”

While choosing to be the contractor as well as the architect for a full, first-time passive house construction — never mind a conventional build – might seem like a classic case of misguided bravado, Boris says the project was really set in motion after contacting Shoalwater Timberframe in Wexford, and then a window supplier.

Donal Mullins of Shoalwater, who has built a strong reputation for passive house construction, has form in working with architects on their own new-builds, such as the Carlow home of Helena Fitzgerald that served as the cover story in issue 5 of Passive House Plus, so he clearly wasn’t phased about working with Boris.

As is his working philosophy, he took on the whole frame construction element of the project, leaving Boris with the more manageable tasks of building the insulated foundation slab and the services and finishes. 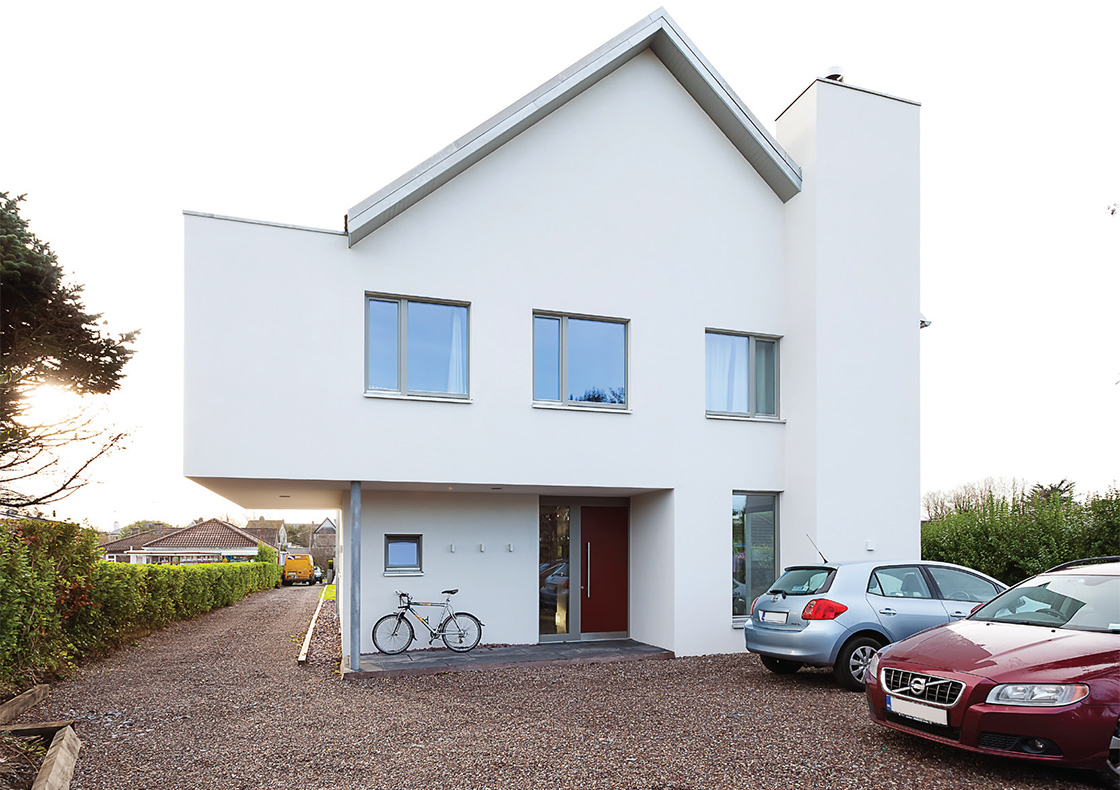 “There’s a huge amount of that work taken away from the hands of the contractor who sometimes wouldn’t have that experience to deal with it properly,” said Mullins. Having said that, he found Boris was very hands-on, and displayed a handy knowledge of the construction side, “which is sometimes not always the easiest thing to get across to an architect”.

The biggest difficulty for Mullins and other suppliers was the restricted access to the site on the west side of Cork City, which can be entered only via a narrow lane. Help also came from a colleague of Boris’s, Greg Tisdall, with passive house construction experience who generously offered his time and invaluable advice.

(clockwise from top left) the Kingspan Aerobord insulated foundation practically eliminates the critical wall-to-floor cold bridge; (next 3 images) the house is one of the first in Ireland to feature VapAirTight, the new airtight OSB from Smartply, which helped the project achieve world-beating airtightness — the green UV polymer coating provides the vapour tightness; the factory-built timber frame and windows were in place in just a few weeks; the external walls also feature Gutex Thermowall insulation

“The timber frame and windows went up in several weeks, and presented me with a skeleton house to organise to finish off.” Boris was also insistent on building with natural, healthy materials.

“Many building materials used in conventional building are quite toxic in nature and can possibly cause health issues if not used or installed correctly,” says Boris. “As I plan to be spending a large amount of time inside our house with my family, it was important to me to try and build the house as healthy as possible with as much natural materials as I could manage.”

Examples of natural materials used include the timber frame construction, timber rather than PVC windows and cellulose insulation, while the building’s embodied energy was reduced with the use of 50 per cent GGBS cement (a low carbon alternative to traditional Portland cement). Boris’s house is also one of the first houses in Ireland to use a new airtight OSB board from Medite Smartply called VapAirTight on both the walls and the roof. It’s manufactured in Waterford and marketed as a sustainable, robust and cost-effective alternative to specialist membranes.

“The product is obviously called VapAirTight for a reason — it’s vapour tight and airtight,” says David Murray of SmartPly. “To guarantee that very good level of airtightness we basically engineered the OSB core to be airtight.” This, he says, is in contrast to other guaranteed-airtight OSB products that use a coating or membrane. 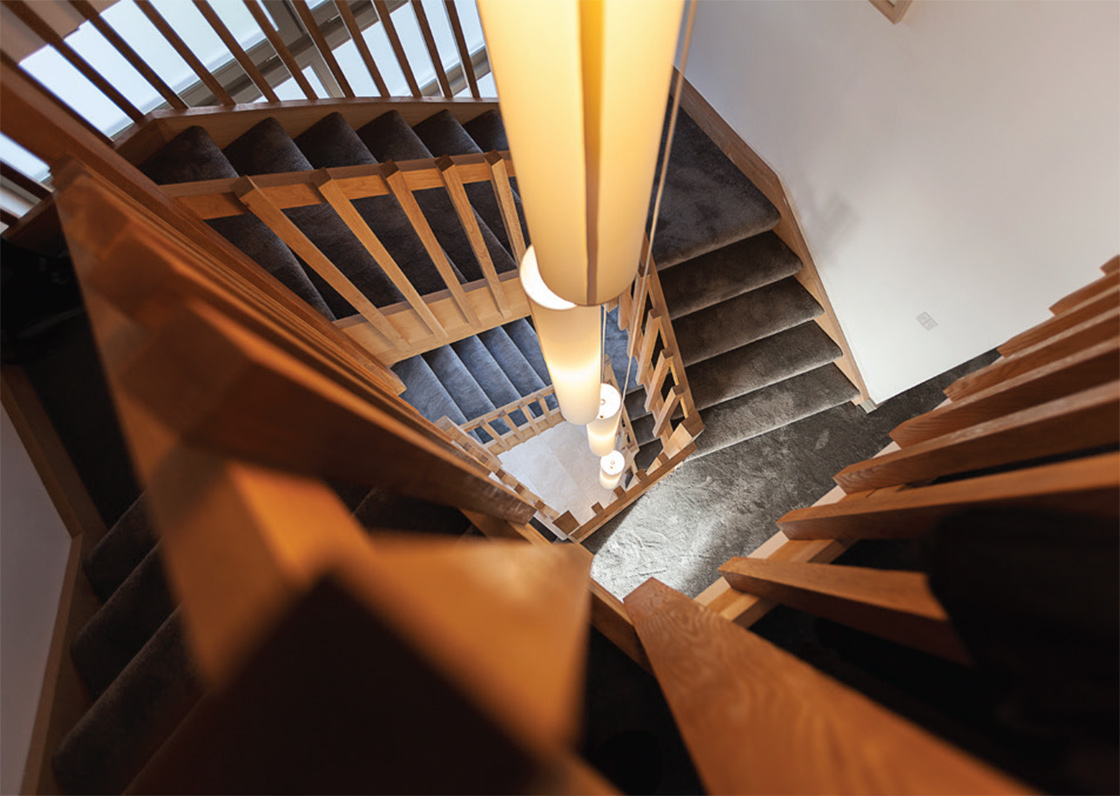 Traditional OSB, he says, can’t guarantee airtightness, even though it is used as an airtight layer on many timber frame projects. But the nature of its manufacturing process means that its airtightness will vary — it simply isn’t designed to be airtight. Murray claims that VapAirTight is also more robust than a membrane, and explains that its green UV polymer coating provides the vapour tightness (SmartPly also supply Medite Vent, a vapour open board).

Murray was on site, along with Shoalwater and Boris de Swart, for the final airtightness test — which produced a world class result of 0.09 air changes per hour at 50 Pascals, one of the best airtightness results Passive House Plus has ever witnessed. According to airtightness tester Gavin Ó Sé of Greenbuild, the result owes a lot to Shoalwater’s precision: “When I go on to a Shoalwater site, I know it’s going to be spotless – you could eat your dinner off the floor,” says Ó Sé. “Every perimeter is accessible. There’s no rubbish – nothing cluttering the way – so that with every junction, every possible leakage location is plainly visible without having to move things. That makes my job easier as a tester, but it also makes their job easier as installers because they can see everything as they work to make sure it’s nice and clean.”

Boris also had a strong input into the heating, hot water and ventilation set-up, which is provided by a Nilan Compact P system. A heat pump drives the underfloor heating and hot water buffer tank and is linked to a combined ventilation/domestic hot water system. 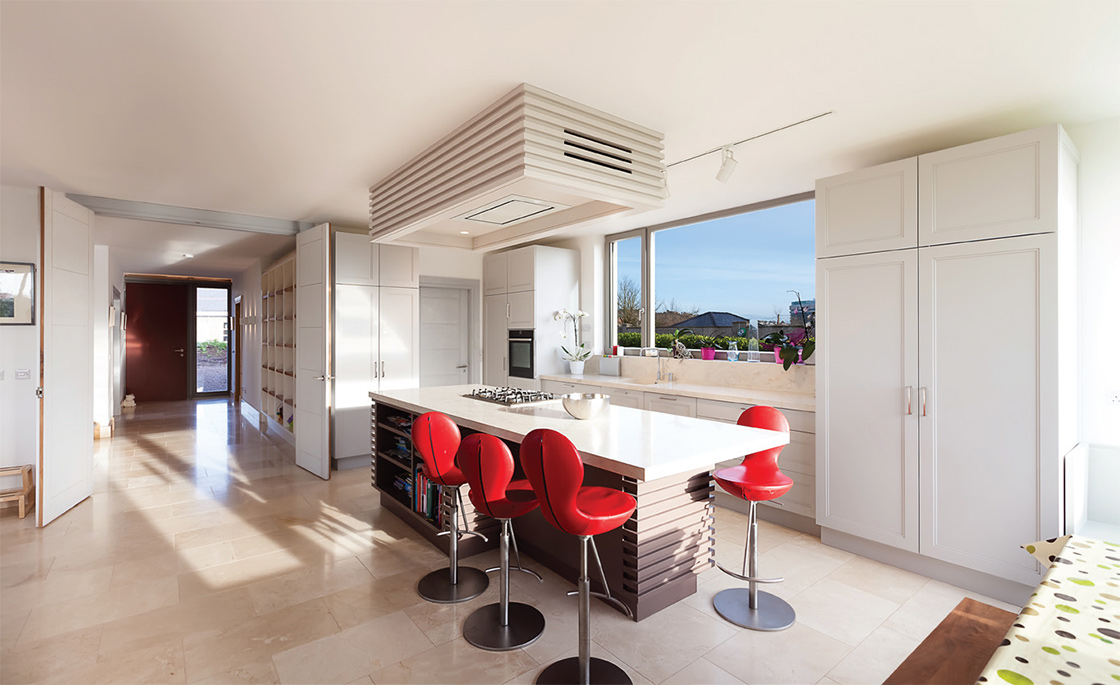 In an ideal world, underfloor heating would not be needed in a passive house, but Boris chose to install it after hearing feedback from a colleague regarding other passive house projects where the clients complained of their homes being too cold in winter, even with their wood stoves on.

He adds that one advantage of the Compact P system from an installation perspective is that because some of the ground floor supply air is actually in the floor, this effectively reduces the amount of pipework that you need to put through the rest of the house. “All of the supply air pipes for the ground floor are encased in the insulation in the ground floor, helping to reduce the number of pipes in the intermediate floor. This reduces the congestion of pipework significantly,” said Falvey. “This also improves comfort, by delivering supply air at floor level rather than ceiling level, creating a more balanced temperature and air distribution.” 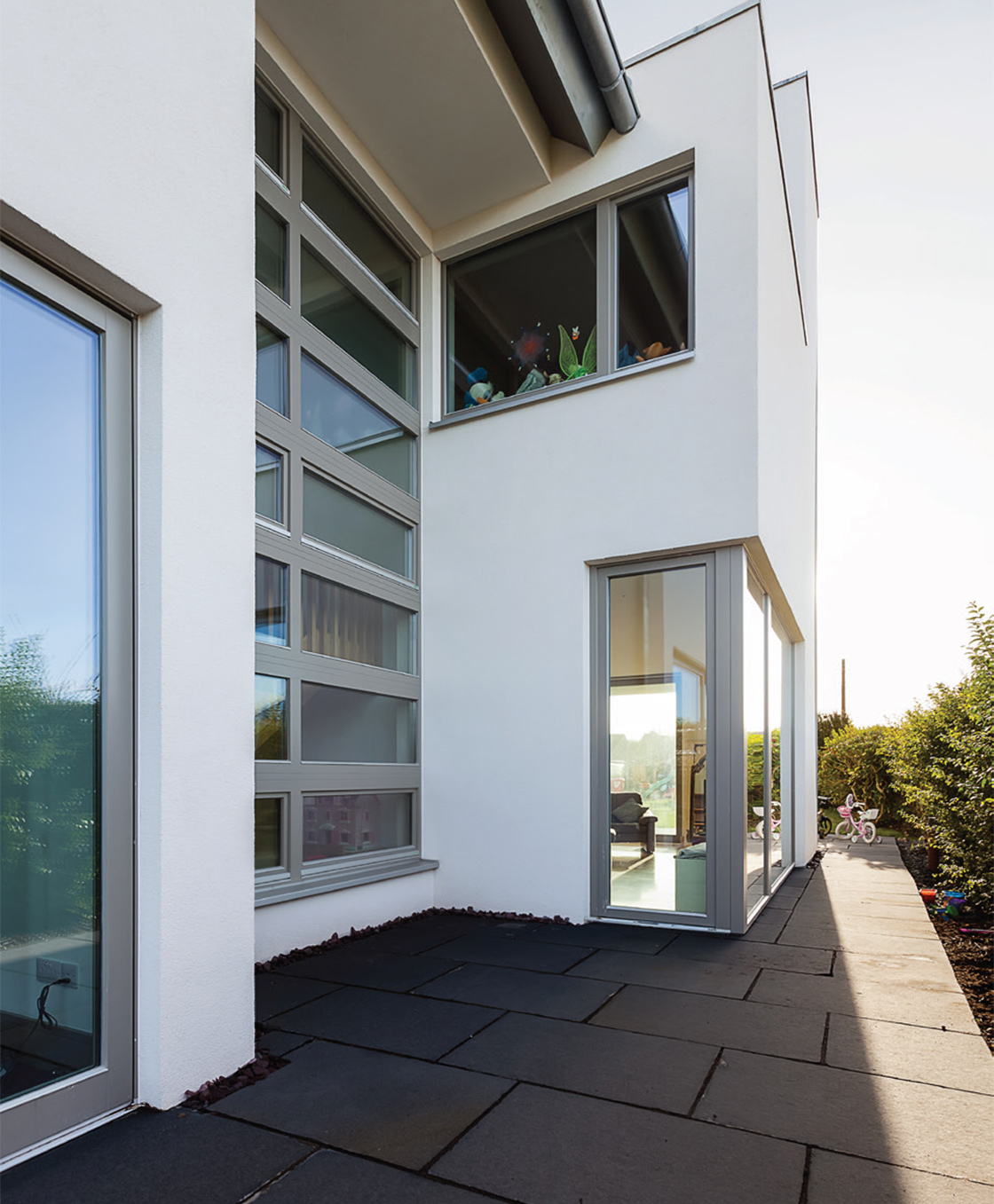 Boris says he is planning solar PV panels as soon as the government decides once again to re-introduce feed-in tariffs for microgeneration.

The final result — particularly the airtightness — is surely a strong vindication of Boris’s bravery, but also his careful planning as the house is “pretty much exactly” as he had envisaged it from day one, he said. From the outside, the 238 square metre, two-storey detached building looks highly impressive and even imposing, but also very neat and uncluttered. Boris and his family moved in last August. “Our impressions so far are fantastic. Light and space abound. The kids are in love with the house – they still call it ‘the new house’. We are all delighted with it, “he says.

“We love the generous spaces, the daylight inside, the amazing kitchen, the crafted stairwell which links the floors, the landing which is another play area for the kids, the atmospheric lighting amongst others.”

In terms of the cost vs a conventional build, Boris was prepared to build below passive standards at the outset in order to keep to his relatively low budget. “But the more I researched, it appeared it could be done for much the same cost as a reasonably well-built standard house.”

One slight compromise in terms of looking for full passive house compliance was the Kneer/Woodmarq timber windows. “To make the jump from really good timber frame triple-glazed windows to passive timber frame certified windows (or equivalent) there is quite a price increase. We wanted to avoid PVC windows at all costs.”

However, while the preliminary indications are that it would pass, they chose not to obtain passive house certification. “The budget we had to work with was already somewhat short, and from my research to obtain certification costs in the region of €4000 by the time you have construction details verified and the certification process done.”

Donal Mullins confirms that this is also the case with a lot of his clients, as certification is often among the initial costs that are sacrifi ced in order to stick to a budget. However, Boris says he has every intention of obtaining certifi cation at a later date and if the preliminary measurements are correct, it should be a walk in the park.