Quinn Building Products says that a study undertaken by the company’s technical team demonstrates how the developer of a typical A3 rated, semi-detached house can make substantial savings using Quinn products.

The study house is part of a large development of around 300 houses, with potential to save about €360,000 in total across the development, according to the company.

The Quinn team provided three different options to the client, all of which would reduce building costs substantially, and one of which will also improve the energy rating from an A3 to an A2 (see tables).

One of the simplest changes made in every scenario was to change the floor insulation from PIR to EPS, something Quinn have been recommending to a lot of their clients lately, given the current shortage of PIR insulation on the market.

“This one change saved almost €400 in this house, and we’re seeing similar savings in a lot of the houses we’ve looked at, so it’s certainly a change everyone should consider,” commented Jason Martin, Quinn Building Products’ specification and product development manager.

By switching the PIR floor insulation to Quinn EPS Pearl insulation, there was no requirement to increase the thickness of insulation when used in conjunction with Quinn Lite blocks, so this straight swap provided an instant saving.

The addition of the Quinn Lite blocks then allowed the designer to change the spec in other areas, which is where the rest of the cost savings are made. For example, the wall and / or roof insulation can be reduced, or a solar PV panel removed.

According to the company, the third specification option improves the thermal performance of the house, meeting the proposed nZEB energy performance co-efficient (EPC) requirements in DEAP, and still saves money. With Quinn Lite blocks in place and Quinn EPS Pearl insulation in the floor, the architect can afford to remove one of the PV panels and still see a change from an A3 to an A2 rated house. The developer will achieve a €700 saving per house in this case also. 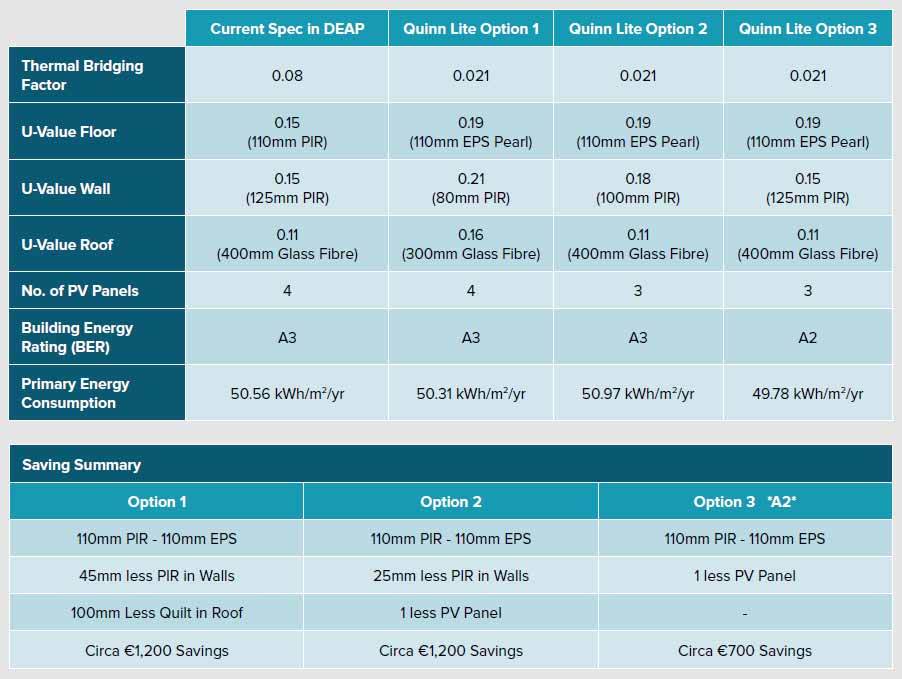