The Land Development Agency (LDA), in partnership with Dún Laoghaire-Rathdown County Council, has broken ground on the largest public housing scheme in the state in recent years – a passive house scheme at Shanganagh in Shankill, Co Dublin.

Shanganagh is an important milestone in progressing Housing for All, delivering on the LDA’s mission to unlock state land to deliver large-scale affordable housing projects around the country.

Construction is now underway on 597 homes, with the first being available by the end of 2024. The homes at Shanganagh will be 100 per cent affordable, with 51 per cent cost rental (306 homes), 15 per cent affordable purchase (91 homes) and 34 per cent social housing (200 homes). The development will offer a mix of accommodation suitable for single people, couples, and families, with 99 of the new homes to have three bedrooms.

Designed by ABK Architects, the development will be the largest residential scheme in Ireland certified to the passive house standard, with the scheme’s hot water and low heating demand provided by a heat pumpbased district heating system.

The development will have a density of 85 units per hectare, with a significant emphasis on reducing transport emissions without compromising on amenity. The design includes low car parking provision of 0.54 spaces per home, parking spaces for car sharing schemes, and 1,300 bicycle parking spaces in secure and dedicated buildings.

The scheme will also be well served by public transport, with a new proposed Dart station within a 1 km walk or cycle, and a new Bus Connects route. The design caters for electric vehicles, with 34 charge points included and all other resident spaces future proofed for future connection.

The scheme has been designed with central amenity, resident support, and external play facilities accessible by all residents to create a sense of integrated community. Communal lounge areas, community and function rooms, and an external village square will be included for social events to engender community integration.

Business pods and co-working units will assist residents who work from home or run small businesses. Postal storage facilities will be provided for residents to secure their belongings in a safe manner.

The scheme’s design includes a creche with capacity for 107 children, playgrounds, a gym, a convenience store and a café. Walls Construction was appointed lead contractor on the project in June after a public tender process.

Taoiseach Micheál Martin, said: “Shanganagh is exactly the kind of development we envisaged when the LDA was established – a state-owned developer and homebuilder building new housing on publicly-owned lands.” 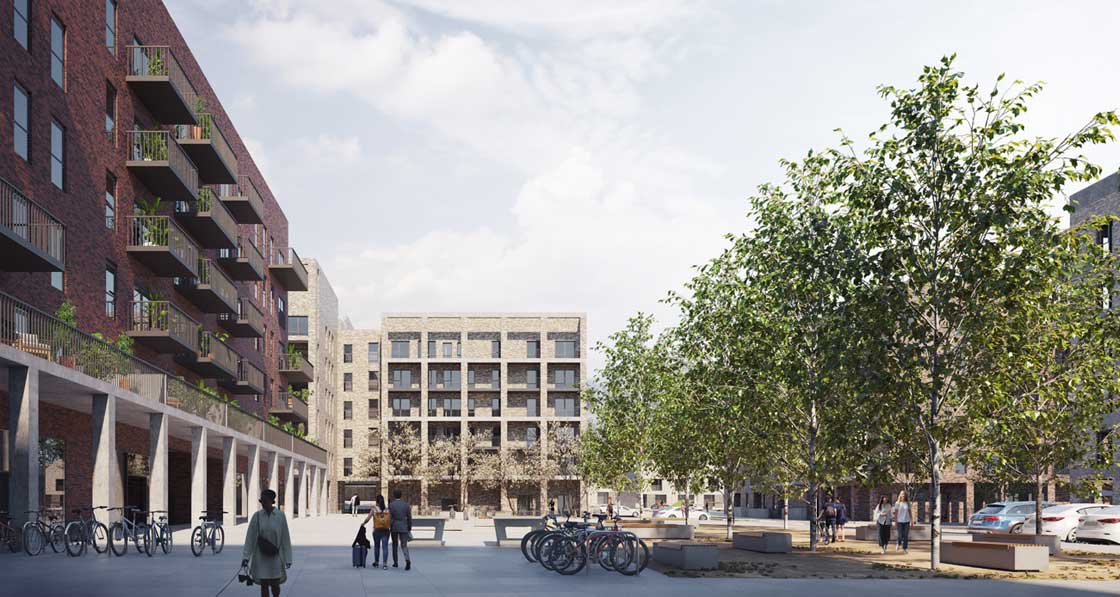 A rendering of the proposed Shanganagh village square.

Martin emphasized the scheme’s mix of different housing tenures including social housing, cost-rentals for low to middle-income workers living in Dublin, and affordable housing for families to purchase. “That’s the right approach,” he said. “It’s really encouraging to see significant progress being made and the start of the largest public housing scheme in the state. It’s another important step to achieving our target of building 40,000 new homes a year by the end of the decade.”

LDA CEO John Coleman said breaking ground on the site was a very important moment for the LDA in delivering on its mission to accelerate the delivery of affordable housing on state land. “We are particularly proud of the scale of the Shanganagh scheme, which will be the largest direct-build public housing scheme in the state in recent years,” he said.

“The project’s design is rooted in sustainability and energy efficiency, and will deliver a large quantity of much needed affordable and social housing to the area.”

Dun Laoghaire-Rathdown County Council chief executive Frank Curran said: “We are committed to delivering homes for people at all income levels within the county and this development will offer people an attractive place to live that is close to transport links and supported by a wide range of local amenities.”

This year the LDA has sought permission for over 2,300 homes around the country, 100 per cent of which will be affordable and social.