Fuel poverty has “come of age” in the last 3 years and great strides have been made in understanding the scale of the problem, Christine Liddell, professor of psychology at Ulster University, said in her keynote address to the Energy Action conference in Dublin Castle on Monday, 6 February.

Citing British research as an example, she stressed that any investment made in tackling fuel poverty would be recouped by the state. 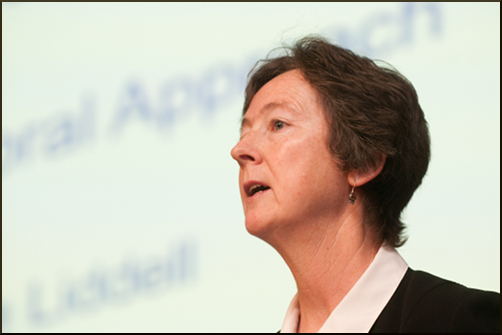 Chrstine Liddell, fuel poverty expert and professor of psychology at the University of Ulster

Fuel poverty has “come of age” in the last 3 years and great strides have been made in understanding the scale of the problem, Christine Liddell, professor of psychology  at Ulster University, said in her keynote address to the Energy Action conference in Dublin Castle on Monday, 6 February.

Citing British research as an example, she stressed that any investment made in tackling fuel poverty would be recouped by the state. "To remove hazardous cold, damp, and mould from all English homes would cost 20 billion euro. Who pays? The BRE [Building Research Establishment] analysis estimates that 40% of this cost is likely to be recouped in gains to human health, quality of life and wellbeing – that is, to savings for the National Health Service," she said.

She stressed that a €20B industry would also open up opportunities in the public sector. She mentioned apprenticeship training, manufacturing, trade, and export as obvious beneficiaries, as well as benefits from tackling climate change.

But she warned that current fuel poverty policies still contained major gaps, such as neglect of mental health issues and the threat to very young children.

However she predicted major progress over the next 10 years, including much greater public and private sector funding in tackling fuel poverty. “There has never been a better time, or a more convincing evidence base on which to do this,” she said.

Thirty per cent of excess winter deaths (EWDs) in Ireland and Britain are explicitly related to fuel poverty. An average of 606 such deaths occur on the island of Ireland each year.

Health risks associated with living in poor housing include indoor damp, indoor mould, fumes from solid fuel fires, and cold indoor temperatures, all of which are aspects of fuel poverty.

Until now, cold temperatures have always been assumed to cause illnesses that involve the heart, lungs and circulation. But new results from studies funded by the World Health Organisation suggest the effects extend to a whole new area of disease, namely stress-related illnesses. These include migraines, as well as gastric and duodenal ulcers.

Hospital admissions in New Zealand also show babies and toddlers are particularly vulnerable to cold temperatures in winter. “We need to ensure that we do not marginalise the young in the fuel poverty lobby, which remains dominated by the equally pressing needs of senior citizens,” Liddell said.

The conference heard about research, set to be published in March which identifies a hierarchy of coping strategies that people living in fuel poverty use, which starts with cutting down on non-essentials, but progresses quickly  to cutbacks on food, then heat and light. For many this is not enough, and they have to rely on borrowing from friends and relations, using savings to pay energy bills, selling valuable items and finally falling into debt and dependence on credit agencies. In fact 60% of those affected reduce expenditure on food and heating at the same time, eating less and heating less.

Installing new boilers or insulation fell short of improving people’s wellbeing, unless people understood how these new gadgets functioned and actually felt warmer, Liddell warned. “Keeping the customer satisfied emerges as a vital element of ensuring that refurbishment will lead to improvements in mental health, highlighting the need for fuel poverty programmes to focus on customer service and satisfaction, just as much as on the technical aspects of altering their heating systems and insulating their lofts," she said.

Oil money
Also speaking at the conference, architect and TV presenter Duncan Stewart said while €6bn a year is spent in Ireland on importing oil, a similar amount spent on developing alternatives would create 120,000 jobs, as well as helping to address our balance of payments and overall financial problems.

Meanwhile Construct Ireland editor Jeff Colley, who also spoke at the conference, criticised the government’s decision, just before Christmas, to cut the grant for external cladding for houses, the most effective form of insulation.

Legacy of the boom
Architect Joseph Little of Building Life Consultancy told the conference that, “as with so many aspects of our society, the legacy of the boom needs to be challenged at every level. Heating budgets of borrowers are tightening just as heating costs are rising. Problem dwellings require more attention than any others, yet simply increasing the heat delivered into dwellings which have high levels of thermal bridging, air leakage and humidity can actually cause health problems because of increased condensation and mould."

“Ironically solving these problems can allow us to turn the heat down and create healthy conditions. We have the knowledge and ability to solve the inherent problems of these dwellings. We just need focus and willpower," he said.

Meanwhile Dr Anne O'Farrell of the HSE's Health Intelligence Unit told the conference that recent increases in fuel prices, together with the reduction of the fuel allowance from 32 weeks to 26 weeks, had the potential to aggravate excess mortality in winter.