Leading timber frame manufacturer Cygnum has been shortlisted for four prizes at this year’s Structural Timber Awards. The awards “showcase innovation, celebrate best practice and recognise expertise in timber technology and the ways it contributes to an attractive, energy efficient and sustainable built environment”.

Cygnum Timber Frame, which recently became a patron member of the Passive House Association of Ireland and is regarded as one of the UK and Ireland’s leading timber framers, has been nominated for two of its passive buildings. The Enterprise Centre at the University of Anglia has been shortlisted for both the Low Energy Project and the Project of the Year awards. Dubbed by some as one of the greenest buildings in the world, it features a timber frame of locally-grown pine wood with thatch cladding externally, and meets the passive house standard too. It was previously featured in Issue 12 of Passive House Plus.

Meanwhile, Cygnum and leading passive house architecture firm Architype have been jointly nominated in the Education category for the Burry Port Community School in South Wales. The project features two buildings — one built to the passive house standard using conventional timber frame, and another ultra low energy building constructed using brettstapel, a system of timber frame construction that makes use of low grade timber and avoids the use of nails or glues. The project is profiled in detail in this issue of Passive House Plus.

Cygnum and Architype have also been shortlisted in the Pioneer category for their string of successful passive house projects, including the projects above and a suite of other passive schools. Cygnum’s director of UK sales Stuart Scott told Passive House Plus that during the economic downturn, the company invested a lot of time educating itself on the passive house standard, becoming one of the first companies in the UK and Ireland to develop a build system certified by the Passive House Institute. He said being nominated for the awards is, “a culmination of what we’ve been doing over the last two or three years. We’re delighted to be shortlisted across four different categories as it is recognition for all the effort we have been putting in over the last few years.”

The awards take place on 19 October at the National Conference Centre in Birmingham. 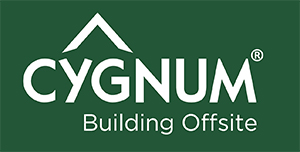