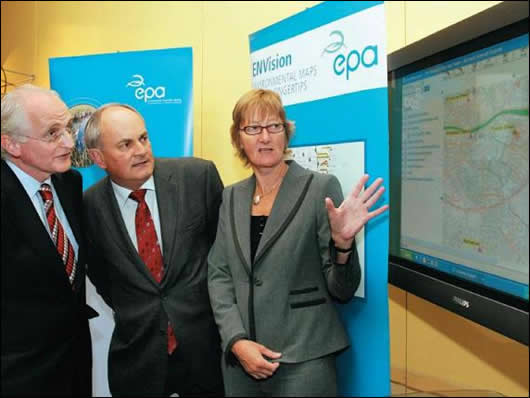 Launching the agency’s annual highlights for 2008, EPA director general Dr Mary Kelly said the environment was “an asset under threat” and early warnings about the potentially catastrophic effects of climate change “must be heeded”.

She said the State investment in environmental infrastructure must now be given priority to ensure Ireland “in the first instance catches up to European norms in key areas like waste-water treatment and the provision of good-quality drinking water to all consumers”.

Dr Kelly said “fundamental change” was required to ensure that economic recovery was based on low-carbon, sustainable principles.

She said there were clearly many economic and social advantages in developing a green economy.

She claimed Ireland had a real opportunity to become a world leader in renewable energies and to position itself as a net exporter of energy in years to come.

Looking at the highlights of 2008, she said the agency’s fourth, state-of-the-environment report, Ireland’s Environment 2008, was undoubtedly a flagship report.

The report detailed the four main environmental challenges for Ireland. They are:

- Limiting and adapting to climate change;

- Reversing environmental degradation – particularly in relation to water pollution and the conservation status of habitats;

- Mainstreaming environmental considerations across all sectors of the economy;

- Complying with environmental legislation and agreements.

As part of its research programme, the EPA has also been working with the Economic and Social Research Institute (ESRI) and Teagasc on the development of a new way of forecasting how economic and social developments will affect the environment.

Called the ISus project – for Irish sustainable development model – it allows the agency to predict the impact of future developments on the production of waste and the generation of potentially polluting substances such as acidifying gases and greenhouse gases.

The year 2008 was also a significant year for water protection and management, with the first full year’s supervision of the production of drinking water and the introduction of licensing for sewage discharges.

Other significant events were the granting of a waste licence to Dublin City Council for an incinerator, and the taking of 20 prosecutions at District Court level.

The publication of a National Hazardous Waste Management Plan was also completed in 2008.

This plan made 29 recommendations that, when implemented, will reduce the generation of hazardous waste and ensure that all hazardous waste is collected and managed appropriately.

It will also increase Ireland’s self-sufficiency in hazardous waste management, and deal with the legacy and contamination of past practices involving hazardous materials.

The EPA also highlighted the difficulties facing Ireland in relation to meeting the targets for diversion of biodegradable municipal waste from landfill and set out a number of options for dealing with the issue.

This will be a major issue for Ireland in the coming years, according to the agency.

Environmental Protection Agency priorities in 2009 will include:

- the development of a risk assessment tool for old dumps;

- the publication of a large biodiversity project AgBiota;

- publication of a National Waste Report, among others;

- continuing research into environmental technologies in relation the the ’smart, green economy’;