Water, water, everywhere, nor any drop to drink

One is reminded of the Rime of the Ancient Mariner when listening to housing discussions.

There are a number of popular narratives, most borrowed from abroad. “Planning is the problem... high standards are making development unfeasible... we need smaller apartments...” etc.

Analysis is frequently inconclusive and most of the above statements, if incorporated as policy, in many cases will further inflate land values.

Increasing new home supply does not necessarily cause prices to drop (i.e. there is no causation), and household sizes are increasing. In November 2017, the Society of Chartered Surveyors estimated that 35% of a typical apartment sales price is land value and developer’s profit; minor proposed apartment standards cost savings will have little effect.

Planning is not the problem – statutory processes are clearly defined and anyone involved in the industry knows how long planning takes, and programmes accordingly.

There is talk of a land bubble. Private equity has piled into the land market in recent years.

Speculative land hoarding is a feature of the Irish property market (aided by tax breaks) and for those who purchased in the downturn, paper profits have been impressive.

Much industry sentiment is based on the ‘myth of scarcity’ – how planning restrictions on residential zoned land is driving up prices and making development unfeasible, a common thread in US housing discussions.

But is development land scarce?

The Residential Land Availability Survey is published by the Department of Housing, Planning and Local Government and records all residential zoned land in the state, county by county. In 2015, the figure for zoned land included in current development plans (so-called stage 2) was 17,345 Ha, which had a capacity for 414,712 dwellings nationwide.

The amount of land currently zoned residential in Co Dublin is 2,645 Ha, with a capacity for 116,705 dwellings.

To put this abundance in context, compare the figure of land available to the number of homes completed and registered in 2017 on the National BER Research Tool database (less than 10,000, as reported in the previous issue of PH+), the most accurate indicator of house-building activity at present. Nationwide, and in Dublin, there is currently enough zoned land for over forty years at current build levels. The abundance of zoned land compared to housing output is even more pronounced in other areas such as Cork City and county. 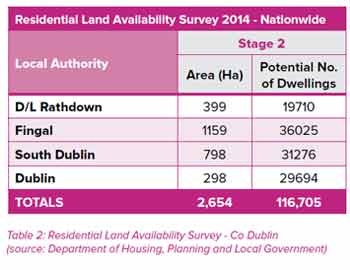 The lack of public housing activity has given rise to calls for a new state agency to compulsory purchase land. Do we need this?

Rebuilding Ireland’s Housing Land Map was launched by former housing minister Simon Coveney in April 2017 and is an interactive map showing 700 locations of residential zoned land owned by local authorities (200 Ha is owned separately and in addition by the Housing Agency). At the official launch, department officials noted that this represented only a portion of the land owned by local authorities and excludes other lands in the ownership of the Housing Agency and other state organisations.

Remarkably, local authorities own enough zoned land to accommodate a minimum of 38,000 dwellings – in Co Dublin enough for 19,000 dwellings.

In an 18-month period, from 2016 to Q2 2017, local authorities built 440 dwellings – including 170 in Co Dublin. There is enough publicly owned zoned residential land to last forty years at output levels.

Data from other sources confirms that local authority-owned land is in fact a multiple of these figures. The full extent of local authority land ownership has yet to be confirmed, but initial estimates put it as high as 20% of all residential zoned land in some locations. No scarcity here.

Fingal County Council built 78 homes in the past three years, yet owns enough land to construct thousands of homes. The lack of official ambition for state-owned land appears systemic and suggests that low local authority build levels is official Department of Housing policy.

There is no drought

Recent experience has seen when the state partners up with co-operatives the results can be impressive – affordable family homes for sale for below €190,000 in Co Dublin.

As affordability continues to deteriorate in the rental and sales sectors, it is inevitable that officials will be forced to start actively managing state-owned land to provide affordable housing and public housing.

The question is how long will officials be let hoard the considerable land banks under their control before public opinion demands action?

However, for now it looks like speculative land positions are secure in the face of continued official inertia.

The industry (and shareholders) should take note – when it comes to development land, there is no drought. The balloon that lifts you up can very quickly become the weight that drags you down.