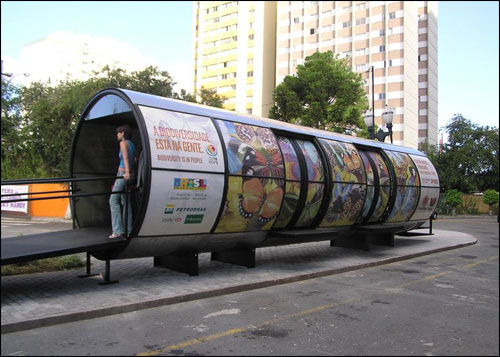 A new film from DelBello Pictures and MariaVazPhotgography profiles the Brazilian town of Curitiba, one of the most interesting examples of sustainable urban design going.

With a population of 1.8 million people, the city is a world leader in public transport, green space provision, urban biodiversity and social inclusion.

According to Treehugger, once the town's main street was pedestrianised in the early seventies, business owners quickly asked for more streets to be made car-free despite their initial opposition. Buses are the only form of public transport - in busy areas two one-way streets surround a small, two-lane roadway exclusively for the bi-articulated buses that service the city, and for which a flat fee is charged regardless of the distance traveled. The introduction of the bus system is estimated to have reduced car journeys by about 27 million trips per year. Land within two blocks of the main bus routes is zoned for high density development. Getting around by car is apparently quite difficult, with many one-way streets and priority given to buses

There are also strict controls on urban sprawl, while areas subject to flooding have been turned into parks. The city now has 52 square metres of green space for ever citizen - in 1970 there was just one square metre per person. By contrast, the Dublin City Council area has 29.6 square metres per person. Curitiba residents have also planted 1.5 million trees throughout the city, while the city's 'Lighthouses of Knowledge' project aims to provide free educational resources - libraries, internet access and other cultural resources - throughout the city.

Builders are offered tax breaks for including green space in developments, and flood waters have been diverted into artificial lakes in the city's parks. Low income families living in shantytowns on the outskirts are offered bus tickets and food to bring their trash to reclying centres - reducing disease, litter and illegal dumping. 70 per cent of Curitiba's waste is recycled.